Hi everyone, welcome to part 1 of my review of the new Gathering Storm book, the Fracture of Biel-Tan. This book introduces new rules for your Eldar, Dark Eldar and Harelquin units to be used as a single force, and let me tell you, this book gives you some awesome new rules for these forces (not that the Eldar needed any help!).

This first part will look at the rules for the first of the new triumvirate; Yvraine, Emissary of Ynnead. 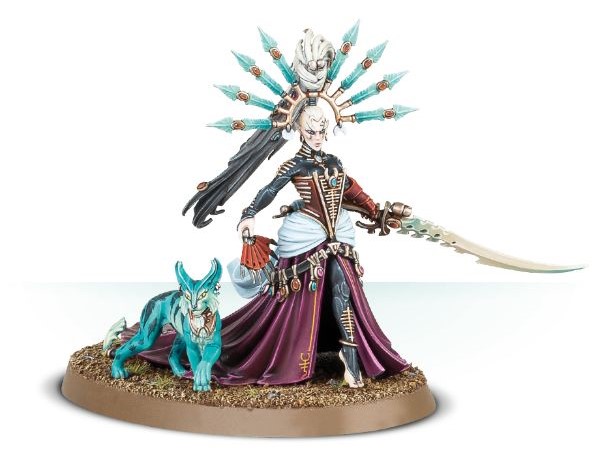 Yvraine, Emissary of Ynnead
Yvraine is a decent psyker with some good combat ability that should be a useful addition to an army.
She has a fairly decent statline for combat. At WS8, she is going to be hitting most things on 3's, at initiative 8 and 5 attacks (4 base and one for two melee weapons). She wields the Sword of Sorrows, a weapon which is +1S (taking her to 4) and AP3 with instant death. Any characters that are toughness 4 (or 5 at a push) with a 3+ save will generally fear Yvraine in combat. She will generally be striking before them and has enough attacks to make failing an invulnerable save more likely and killing them instantly. She will struggle against those with a high toughness or 2+ save, but should be able to handle herself in combat against most basic infantry.

She is not the toughest of characters. With 3 wounds at T3 and a 4+ invulnerable, it will not take a lot to kill her. She does gain Eternal Warrior, making it impossible to double her out with S6 attacks or instant death weapons. She also gets a nice special rule, giving her a wound back on a 4+ if any Aeldari model (Eldar, Dark Eldar, Harlequin or Ynnari) is killed within 7" of her. This should help her be a bit more survivable, but any dedicated shooting or combat attacks will still kill her relatively easily. She is certainly not as durable as Saint Celestine or Belisarius Cawl.

Psychic Ability
She is a level 2 psyker and gets some nice bonus rules to make here a bit more potent in that regard. Her Gyrinx familiar gives her D3 extra warp charge at the start of each psychic phase that only she can use. In addition, the Herald of Ynnead rule gives her an extra mastery level on a 4+ if a Aeldari psyker is killed within 7" of her. This gives her a new power as well. If she is surrounded by a lot of psykers (such as a Seer Council or a number of Warlocks), she has the potential to get incredibly powerful quite quickly.

Her powers come from Daemonology (Sanctic) or the new Revenant Discipline. 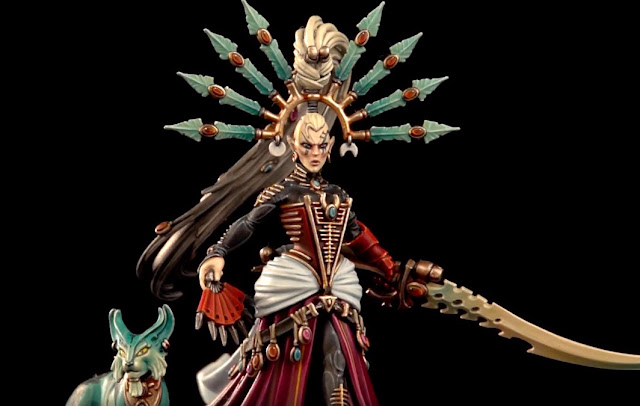 The Revenant Discipline has some pretty decent powers to use. The Primaris is Spirit Hook. It is a warp charge 1 focussed witchfire that has a range of 18". If the psyker has a higher Ld (10 in the case of Ynnead), the target suffers a S6 hit. If the Ld is equal or lower, it is a S3 hit. No armour or cover saves are allowed and it does not affect vehicles. This is ok. Her BS of 8 should ensure that you hit with the shot, but a single S6 hit is not amazing. It will be useful for targeting individual models if you can focus it, but warp charge 2 for a single S6 (or even S3) ignoring armour and cover is pretty underwhelming.

The discipline includes a number of other powers, including a 7" bubble of a 6+ invulnerable, pretty decent and WC1, so useful if you have leftover dice.

It also features a 9" Nova power that is assault 2D6, S3 AP2 and ignores cover. In the right situation, that could be pretty damn useful. S3 is low, but you will still be killing Marines on a 5+.

Word of the Pheonix allows a friendly unit within 24" with the Strength from Death rule to make a Soulburst action. There will be more detail on this below, but once you find out what Soulburst can do, you will realise how powerful this power can be in the right situation.

Ancestor's Grace is a buff to a friendly non-vehicle unit, giving them +1 WS, BS, I, A and Ld, as well as giving them Adamantium Will. Given the abilities of many Aeldari units, this could come in very handy as well.

The final power is Gaze of Ynnead. This is a 12" S10 AP1 assault 1, ignores cover witchfire that does not allow invulnerable saves. This is WC3 and is well worth it. The chance to instant kill any model that is T5 or less in a single shot is pretty damn powerful, as the shot ignores armour, cover and invulnerable saves. She may struggle to get it off, but when she does, the target has a good chance of dying (2+ re-rollable to hit and 2+ to wound most likely). Only those with Eternal Warrior have less to fear from it.

The Revenant Discipline has some pretty powerful abilities and should provide some nice boosts to an army. I can see Yvraine getting some use out of them, especially if she gets her Mastery Level boosted during the game. She also gets a bonus D3 warp charge to try and cast the better powers. 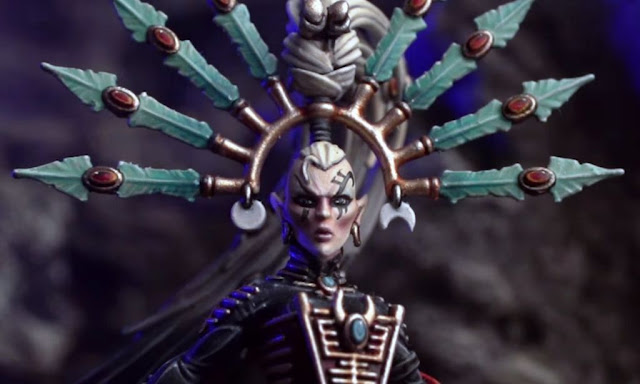 Whenever a unit is completely destroyed within 7" of a non-vehicle unit with this special rule, you can pick a unit to make a special Soulburst action. The action allows the unit to:
Each unit can also Soulburst once per turn and cannot do so if they are locked in combat, falling back or have gone to ground.

Wow. Given the units that can form a Ynnari army, this is an incredibly powerful ability. If a unit's transport is destroyed, the unit inside can get out and fire or assault a unit. If an enemy unit is destroyed, you get to fire at another enemy unit or launch an assault. This could allow you to assault twice in a single turn.

Also, the ability says it happens each turn, but does not specify game turn or player turn. Given how powerful this ability is, I would hope that it is each game turn.

This ability is absolutely brutal, when combined with how powerful the Eldar and Harlequin armies are in the game. You need to get close to the enemy to use it, but that is not going to be a problem for a lot of armies.

Yvraine's warlord trait allows her and her unit to make a Soulburst action within 14" of a destroyed unit, rather than 7".

Overall
At 200 pts, I just don't see the benefit of Yvraine over a number of other Eldar units that can be taken. If you wish to use the new Revenant psychic discipline, why not take a Farseer instead. He is a higher mastery level and gets re-rolls to psychic powers. For combat ability, there are a number of Dark Eldar or Harlequin units that can provide a potent combat punch.

For the same cost as Saint Celestine or Cawl, she is certainly not as durable and does not provide the same army wide buffs as they do.

If I am missing something, please let me know in the comments below, but I don't think Yvraine is all that amazing an addition to an Eldar army (of any variety).