Kraken Bolts- Add 6" to the weapon range and improve the AP by 1.

The great thing about this is that there is now no longer a limit on the AP value and it still combines with Doctrines. On smaller boards, getting 30" bolters is great, allowing you to have a big threat range for the Veterans on the first turn. It also pairs well with other weaponry. For example, the Stalker Pattern Bolter is now AP-4 with Kraken rounds in Devastator Doctrine. Also adds 6" to Bolt Pistols rather than 3" as previously. This means your units armed with Bolt Pistols have a potent threat range.

Vengeance Bolts- Add 1 to the damage.

Again, a great change in my opinion. With Marines going to 2 wounds, this gives the Deathwatch a reliable way to deal with these and other multi-wound models. I much prefer this to the old rounds, which rarely saw use in most of my games.

Overall, some big changes for the SIA. This means that there will be actual tactical choices to make with regards to which ammo type to use. Also, it appears that SIA now stacks with Bolter Discipline, increasing your firepower at range if you did not move.

I like the changes to SIA overall. Even though Hellfire was diminished, I think the other ammo types have been made better. I think the biggest drawback is the change to who has access, with only Veterans and a few characters actually being able to utilise one of the key special rules of the Deathwatch. 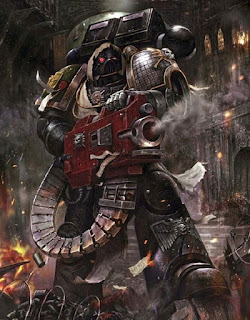 Some of the Deathwatch wargear also got changes to their rules, which may affect how they are used in the game.

The big one is that Storm Bolters have been hit hard. They no longer have access to SIA, so the glory days of the Storm Bolter/Storm Shield squads are probably gone now. This was probably an expected reduction, as it was dominating the army. It was powerful, but on an army which wasn't overly powerful, so I don't think it was too bad. There are a lot of angry Deathwatch players online who went to the bother of converting the units to have Storm Bolters that they are probably not going to use all that much.

The Frag Cannon also saw a big reduction in points and in power level as well. The range of the "flamer" profile increased to 12", but the number of shots it can put out has now halved to 2D3 and it lost the automatically hits ability (though did gain blast). The more powerful profile is similar, but lost the ability to do extra damage at short range.

I think it was unrealistic to expect the Frag Cannon to go up to 12" range with 2D6 automatically hitting shots. I think 2D3 shots that hit automatically would have been a nice compromise. Having to roll to hit is a bit of a blow, so I don't think we'll be seeing the return of the Frag Cannon as a staple of Deathwatch armies. Glad I've only got 4 or 5 in my army!

One change I was glad to see was the Heavy Thunder Hammer. This has dropped to 15 pts, but is still AP-3 and now 4 damage. Finally! The D6 damage was the worst thing about this, as it was too unreliable over a regular Thunder Hammer. Now, there is actual reason to take this weapon, when combined with Shock Assault. It has been limited to one per five Veterans, so you wont be spamming it in your Veteran squads.

Stalker Bolt Rifles also saw a change. They have gone from Heavy 2 to Heavy 1, but are now damage 2 (still AP-2). This still stacks with SIA, creating quite a potent backfield weapon for your Deathwatch teams to field. You can go up to damage 3 with Vengeance shells, ignore the penalties to hit with Dragonfire, or even get AP-3 with Kraken bolts (AP-4 in the Devastator Doctrine).

Shotguns have also seen a bit of a change. They are free for Veterans and get some useful weapon profiles. They can be 18", S5 and assault 2, an 8" flamer or assault 2, S4, AP-1 and 2 damage. This provides a great array of weapon types to be used, as well as being fairly accurate on moving or advancing thanks to being Assault weapons.

The Infernus heavy Bolter is also nasty at close range, thanks to the increased damage of the Heavy Bolter. This could be useful for hammering heavy infantry at close range if you are firing both profiles.

The improved strength of Power Swords is also a great boost, as most Deathwatch units can access them as wargear. This gives them a potent strength and AP bonus against most basic troops in the game. 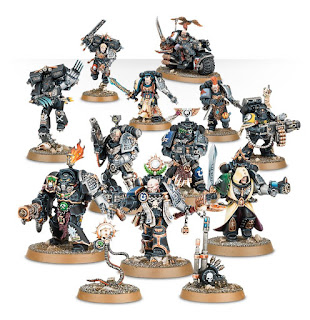 One big change is that Veterans have lost bonuses for adding a Terminator, Biker or Vanguard Veteran to the Kill Team. For me, there is little point in mixing the Veteran kill teams any more, as there is not much bonus in adding these models.

Most of them lose access to SIA. The improved save of the Terminator is nice, but the change to Storm Shields means you can access a 2+ armour save and a better invulnerable save. However, a Terminator with a Storm Shield will provide a lot of durability for the squad, going to a 1+ save, making it highly effective against AP-1 firepower.

Bikes added to the squad also gain the Core and Troops keywords. This allows them to benefit from a range of re-rolls, as well as gaining objective secured. After going up to 3 wounds, Bikes are pretty durable for holding objectives, so gaining objective secured is also a great bonus for them. Taking 5 in a squad and combat squad-ing will allow them to race forward for objectives, and give them a good way to hold them from non-Troops, or smaller squads if they can be whittled down.

At the moment, Deathwatch have lost all their unique stratagems from the codex. Not only that, but all Relics and warlord traits are currently missing from the errata (these may be in the main codex, but I don't have my copy yet to check).

The biggest blow is the loss of the Teleportarium stratagem. This limits them to deploying from strategic reserves, which has its own limitations, rather than being able to access most of the board from the second turn.

Hopefully, many of these useful additions to the army will re-appear in the proper codex supplement.

The Deathwatch saw some big changes to how the army will function. I like the new rules for special issue ammunition, but it is much more restricted in the army now, with Veterans being pretty much the only unit that can utilise it.

The change to kill teams has also made them less useful for running mixed squads. There is little reason to take mixed units for Veterans. There is still some bonus for Primaris mixed kill teams, as you can take Intercessors as ablative wounds for more valuable models, such as Eradicators.

Being able to access Phobos units (finally!) is also a nice boost for the army, as they were missing some form of infiltrating unit. I think Infiltrator Deathwatch could be very useful, especially if they gain access to SIA in the future.