Today I wanted to showcase one of my previous terrain projects that I have worked on, my very own Zone Mortalis board.
It all started with the most innocuous of sentences: "Have you seen the new Zone Mortalis rules from Forgeworld?" This was the question posed to me by one of the regulars at Warsoc (the St Andrews University wargames club that I attend). I told him I had no idea what he was talking about. He patiently explained to me (as one might do a child, or worse, an Eldar player) that it was a new set of rules that had been released to cover close-ranged battles in confined spaces such as a spaceship or narrow city streets, much like a 40k version of space hulk. Knowing my propensity for dabbling in terrain, they added "they've even made some boards for it too, you should check them out". 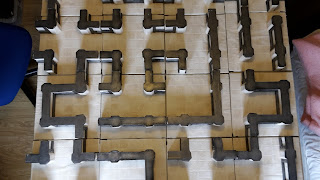 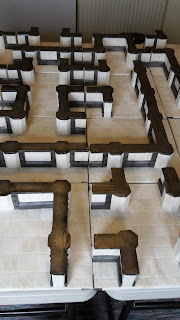 How was I to know that five minutes of small talk while I got my army out of its case would lead to my taking on a massive project that would sustain me for months of work through blood, sweat and tears (as an aside, many, many years ago, I once had a player proudly boast to me that the knives of his chaos space marines were decorated with his own blood. I think my army began a tactical withdrawal from the board at that point as he tried to share Nurgle's blessing with them, quite literally). 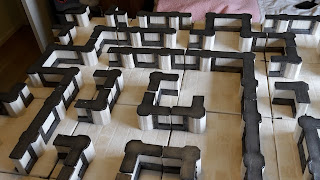 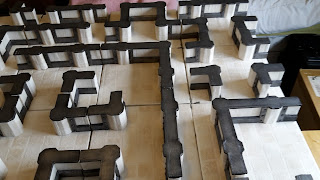 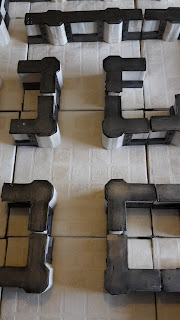 After another rousing game of 40k, I ventured home and looked up the rules on Forgeworld and though they looked quite interesting, a nice change of pace from regular 40k. Then I saw the Zone Mortalis boards and I instantly fell in love. Then I glanced at the price tag and almost choked on my foie grs (ok, it was really spaghetti hoops, but when you live in St Andrews, people come to expect certain things!). I absolutely loved the new Zone Mortalis boards, but then again, I equally love food, warmth and sleeping with a roof over my head, so purchasing a set of boards was not an options I was willing to do at this point.
I had just come off the end of a terrain building seesion, basin up my gothic ruins (based on an old White Dwarf article), making some rock formations and making a bastion from foamboard (following the instructions of the wonderful Bugbait, now there is a talented man when it comes to making terrain), so I was in a terrain making frame of mind. I thought to myself, "I wonder if I could make a serviceable board for Zone Mortalis myself".

I had a bit of foamboard left over from my last project, so I went to work producing a mock-up of a wall section to test out my plans and ability. The next week, I rushed excitedly back to my gaming club to show off my efforts.

The next step was to plan my boards. I decided to model them after the Zone Mortalis boards currently available from Forgeworld and construct them in 1 foot square sections. Initially, I wanted to make a 3 x 3 board (with plans to extend to four foot by four foot in the future). So, nine square feet of terrain to build, how hard could that be?

I started by examining the Zone Mortalis rules and boards that were currently available in order to get an idea of what I wanted in each square. The rules featured a few example board layouts that were a good source of how many of each board would be required. I wanted each of the sections that were available at the time, olus a couple of spares. 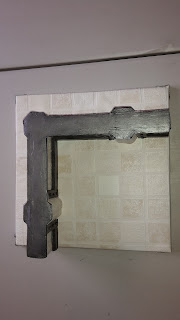 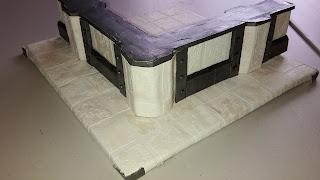 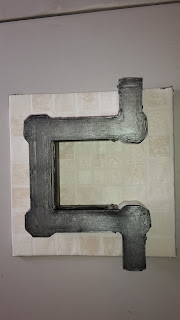 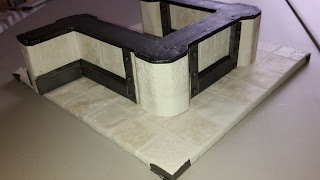 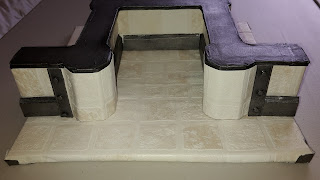 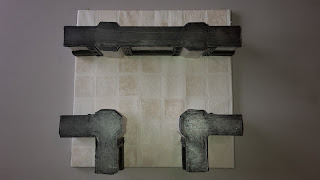 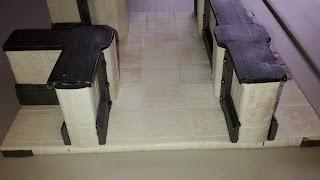 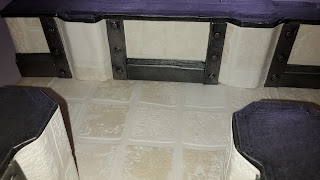 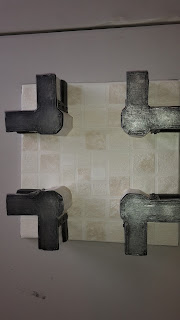 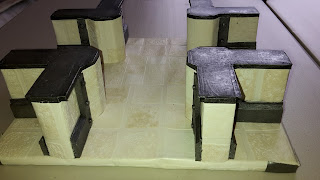 I cut out the foamboard to assemble the different sections. So much foamboard! So, so much foamboard. I'm glad I lived alone during the project, as every conceivable surface was covered in cut out foam pieces, it must have been some sight. I'm also glad that nothing happened to me during this as the police would have wasted hours searching for my tinfoil helmet. That, or questioning my parents if they knew that their son was some sort of very specific hoarder. 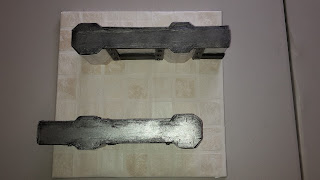 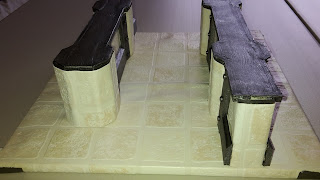 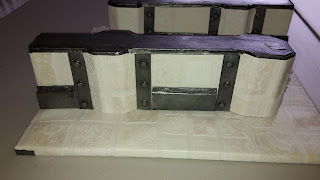 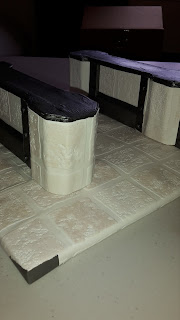 I really wish that I had taken work in progress shots of this back then, but at the time, blogging was a distant thought and there would be no-one interested in seeing how I made them (if anyone is particularly interested in how they were made, let me know in the comments below and I may be able to put together a guide at a later date).

After all the wall sections had been assembled, I didn't fancy painting them all up (painting the metal sections took long enough!), so I got some inspiration- wallpaper. I took a stroll to the local hardware store and picked out a roll of wallpaper that I like the look of. I ended up going for a section that I thought looked like cobbled streets. I thought about using mesh to pave the floor sections and give it a spaceship feel, but this would have worked out too expensive and even more time consuming. I wanted the floor and walls to be done in the cobble effect with a metal roof and decorations on the walls. I found some foam dots with adhesive on both sides in a local art store. I though that these would make great rivets for the metal areas with the minimum amount of efforts.

In the end, the- project probably took about 3 months of work in the evening and weekends and probably cost £80-100 for the 4 foot by 4 foot section (roughly £50 for the foamboard was the most expensive component).

Obviously, the finished artile is not as detailed as the magnificent pieces from Forgeworld, but I was very happy with how they turned out (and it was significantly cheaper too!). It was an enjoyable project to conclude, but it did burn me out a little once I had finished. Once the initial nine board section was complete, it did take me about 6 months to go back and finish the remaining 7 boards to complete the four foot square section. I reckon I have played less than ten games on the board, a real shame. It's something I hope to rectify in the coming years as the games are really quite intense and force very different tactical decisions and army choices to normal 40k. For example, while terminators may be poorer choices in standard 40k games, they really come into their own in Zone Mortalis. The lack of long range firepower means that they can generally get in to combat where they really shine against weaker opponents. Never mind that they don't have to worry about Riptides, Wraithknights, etc.

I still have ideas on adding to the boards. I wished to construct some doors to play some of the different mission types. I also thought of constructing some staircase walkways to allow troops to "jump" over walls in certain sections. One of the issues with Zone Mortalis games is that they can easily get out of position and it is very difficult for them to get back in the game. The stairwells may help give more dynamic games as you could quickly get surrounded if you are not careful.

To date, this is the most ambitious project that I have ever taken on and I am very pleased with the end result. The only issue is that it takes a lot of storage space to keep, it is currently consigned to the loft). Now I just need to play some more games on it.

Anyone out there have a terrain project they are particularly proud of? Anyone make Zone Mortalis a regular part of their gaming? 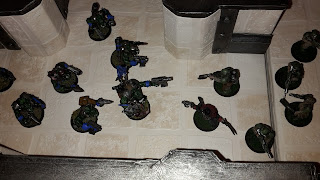 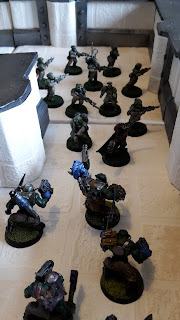 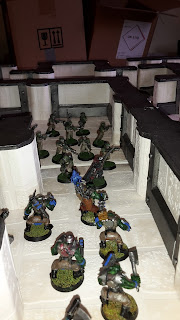 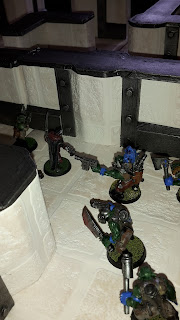 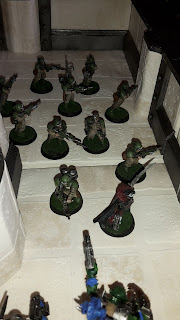 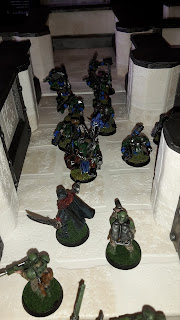