My Dark Angels have scrambled over the battlefield, searching for errant scraps of paper.
My Orks have scoured the board for wayward Gretchin.
My Guardsmen have surged forward, eager to reunite with their unpainted brethren.


My armies have fought over a large and varied number of objectives over the years. From my initial forays into 40k, where the objectives were ripped up sheets of paper with victory points written on them, to using spare models that were not involved in the game to represent points of interest on the board (this last one in particular can get tricky if you forget these models are not involved in the game and accidently try to assault the objective).

More than any other edition of the game, objectives are a big deal in 40k.

Now, what has this got to do with anything? you may ask. I decided it was high time to get some proper objective markers made up. This was during my Imperial Guard phase, so the objective markers were themed around my guard force and painted up to match their colour scheme, but will work for any of my armies.


I don’t know about you, but I find it much more exciting to fight over a communications array or some supplies, rather than over unpainted models or different coloured dice.
These objective markers were made from the spare bits and pieces that tend to go unused over the years from different boxed sets or vehicle accessory sprues. They do have a slight sheen to them though. After I applied the numbered transfers (for use in maelstrom mission), I decided to give them a coat of purity seal to help keep the transfer on and help stop damage to the paint. For some reason, this resulted in the models getting a nice, white sheen so that all my battles now appear to take place at dawn on a nice winter morn, so that all my objectives have a nice layer of frost on them. Oh well, if everything was easy…….
Here are all six objective markers in all their glory. 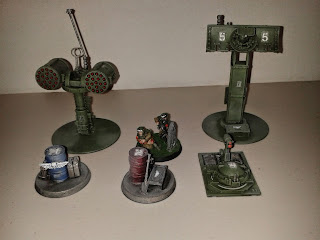 Number 1 is a fuel dump with an Imperial symbol on it. Number 2 is a fuel drum with an ammo container attached. 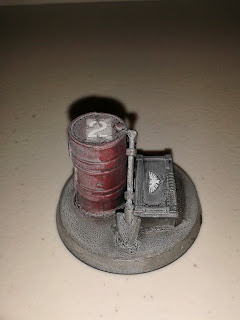 Number 3 is an anti-air battery. This was a leftover from the Valkyre kit that I thought would look good as an objective. 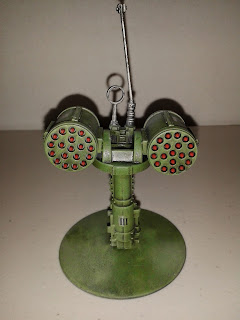 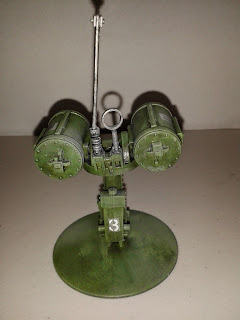 Number 4 is a piece of arcane tech, possible a scanning array or shield generator. 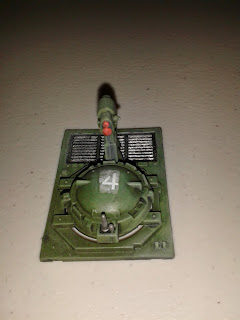 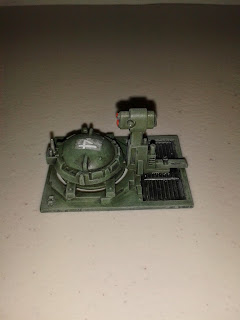 Number 5 is a communications array, very important on the battlefield. 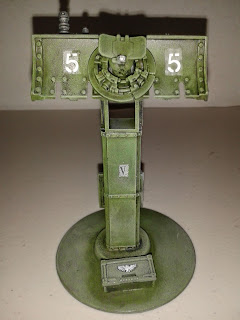 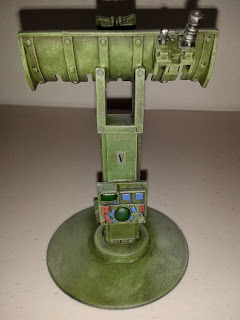 Number 6 is some wounded comrades in arms, waiting to be rescued. 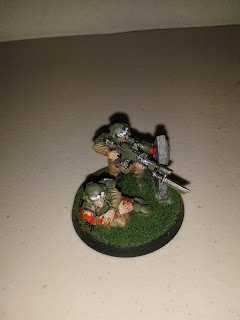 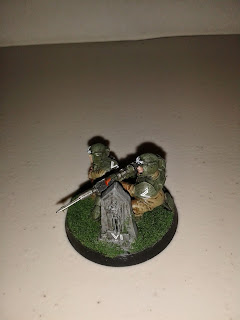 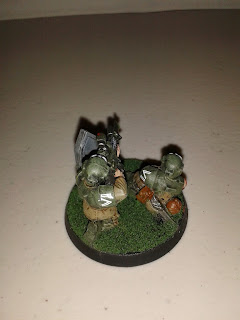 When finishing off my objective markers, I got to thinking about how we use objectives in the game.


Eternal War missions
Several of the eternal war missions use objectives as the focal point for the mission. These missions are a good alternative to the usual “just kill everything” type mission that was common in previous editions. These missions can still be won just by wiping out your opponent (as long as you can also seize the objectives), but may prove a lot more difficult when facing Multiple Small Unit (MSU) armies or a cunning opponent.


An interesting change from 6th to 7th edition was in the Big Guns Never Tire and The Scouring missions. In 6th edition, these missions allowed Heavy Support and Fast Attack choices to be classed as scoring units, respectively. Now, you simply gain additional victory points for their destruction. These units have gone from being an advantage in the old scenario (6th) to a disadvantage in 7th edition. I’m not sure I like this change. Perhaps they should have gained Objective Secured in these missions in addition to giving up victory points on their destruction. This would make these units doubly important as you could use them to seize objectives, but would also need to protect them so as not to give up additional victory points.
Another change to objective placement that I like is that they now must be placed before determination of deployment. This means that you don’t know which side of the board you will be setting up on, leading to a bit more caution when objectives are placed. This can led to boring situations such as 2 on each side and one in the middle (the dreaded cross formation) or to slightly more interesting placements such as 3 in the middle and one on each deployment zone.


It can also lead to some very unusual situation. Have a combat-orientated Ork army going up against an Imperial Guard gunline? Try deploying all the objectives in one half of the board. If your opponent ends up with all the objectives on his side, great! You were going to run in and try to smash him up anyway. End up with all the objectives on your side of the board? Even better! Force your opponent to come take them off of you or surge forward to prevent him getting near you at all.
Obviously, Objective Secured is a powerful ability for units to have in objective-based missions. It can be an important decision as to whether you go for a battle-forged army with this special rule or take a more powerful detachment or formation that lacks this rule. A common thread that I have been reading online is for tournament armies to focus on swamping the enemy with lots of objective secured units to counter Deathstar type builds. Missions are won on the MSU’s grabbing the objectives rather than on causing damage to the enemy.


These missions can easily be overruled by the dreaded Eldar jetbike or White Scars biker spam, swooping in on the last turn to seize everything thanks to objective secured. This leads me to the next type of mission, which introduces some dynamic play into the game.
Maelstrom Missions
In my mind, the introduction of Maelstrom missions had been a huge positive for the game. These missions rarely suffer from the same static gunlines blasting one another from two feet away that frequently made up the majority of games I had played in previous editions.


The use of randomly generated objectives each game turn forces you to adapt your army and tactics on the move, searching for a way to achieve your goals while keeping your forces safe from reprisal. It can force you into tactical situations that you would never dream of trying in a “normal” eternal war type mission.


I remember one game with my Ravenwing army against and Eldar force. I received the “claim objective 3” card during my turn. Objective 3 was in the centre of the battlefield, ably defended by a Wraithlord. I decided to send a lone biker to claim the objective from the monstrous creature (thanks to objective secured), knowing it would most likely lead to his death the next turn. It was worth it, however, to claim the victory point. This is something that I would be very unlikely to do in a normal game, certainly not in the middle of a game.
This type of mission, with random goals to complete each turn, makes for a much more dynamic game than the usual shoot at the enemy for 4-5 turns, then surge forward to claim the objectives on the last turn that some of the eternal war missions can become.
Don’t get me wrong, I know how annoying it can be when all you seem to do is draw practically unachievable cards each turn while your opponent is scoring victory points left, right and centre without even trying. If your opponent draws a great hand on the first turn and ends up 5 points ahead without breaking a sweat, it can be quite daunting to close the gap, especially if the cards are against you. These types of games are hopefully rare, most of the maelstrom games I have been involved in are close run affairs up to the final turns and fortune can swing dramatically during the turn.
Certain army builds really dislike this type of mission. My guard army (primarily infantry based with a few tanks for back up and maybe one or two Chimeras) can absolutely hate maelstrom missions. If I keep drawing cards in my opponent’s side of the board, do I risk several turns running forward to claim them, or discard them and hope for something better?
I think the majority of people playing these missions on a regular basis have implemented the house rule that if you draw a card that is impossible to achieve, then you can discard it and draw another. No more do you have Tau commanders screaming at their subordinates to hurry up and manifest a psychic power so that they can win the game.
The definition of impossible is subject to variation though. At a recent tournament that I attended, the rule was that the impossibility of the card was based on the enemy’s (or your own) army lists at the start of the game. This meant that if you drew the manifest a psychic power card, but all your psykers were already dead, you could not redraw the card for free as it was possible for you to achieve this objective at the start of the game. This ruling came into effect for me in the final game. I drew the “destroy an enemy vehicle” card but had already destroyed all my opponent’s vehicles during the game. I could not redraw the objective card as my opponent did have vehicles at one point. In a game where we were separated by only 1 maelstrom point at the end of the game, redrawing this card could have made a difference to the outcome of the game.
I am a proponent of discarding tactical objective cards that are impossible to achieve at that moment. Hence, if you have already destroyed all your opponent’s vehicles/psykers, you should not be penalised when you draw a card that requires you to destroy a unit you already have eliminated from the game (or you should get the points).
Another key issue for these missions is having access to the physical cards. The amount of note keeping and paperwork required for keeping track of your tactical objectives without the deck in hand is an absolute nightmare.
So those are just a few of my thoughts on the use of objective in 40k. Are maelstrom missions popular where you play? Do you have any great objective markers themed to fit your army? If so, share the link below.
Posted by Mike (St Andrews Wargaming) at 09:04