In this battle report, my White Scars army take on Rob's Death Guard in an ITC mission. I wanted to get some practice with ITC missions for some upcoming tournaments, so decided to try my list with one of the standard missions. 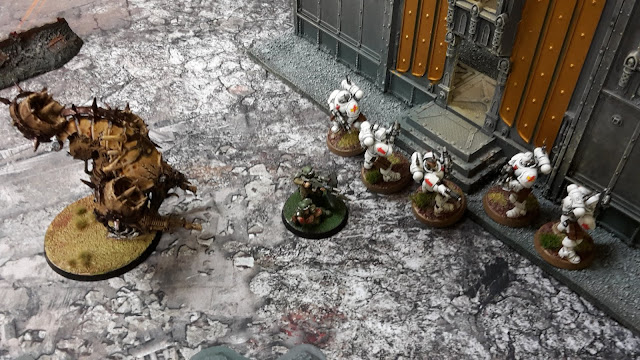 We were playing ITC mission 1 in this game and rolled and got Search and Destroy deployment. For those unfamiliar with ITC missions, they score a little differently. You got one point for holding an objective and one point for killing an enemy unit each of your turna. In addition, at the end of the the battle round, you score a bonus point for holding more objectives or killing more units. There are also secondary objectives you choose to score more points during the game.

I had modified my tournament army based on some additional Primaris units that I had painted up. I added two units of Infiltrators, a couple of Eliminator Squads, the Phobos Librarian and the Impulsor. This army has a lot of board control with most of my troops infiltrating to grab objectives and areas of the board. I also added a second psyker to try and get off some useful powers. I'll need to see how this army performs in the ITC missions.

I find the firepower and mobility of the squads to be quite useful in my games. I normally bring them on in turn 2, where the Tactical Doctrine means their Assault Bolters are at AP-2. Keeping them in reserve also keeps them free from enemy firepower for the first turn. 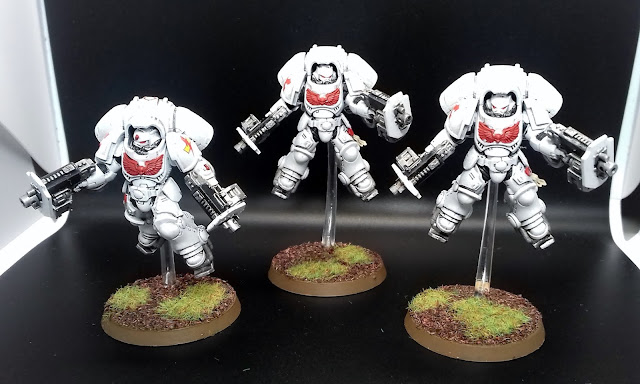 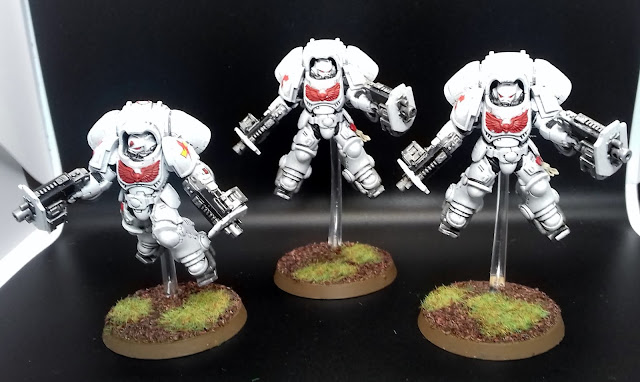 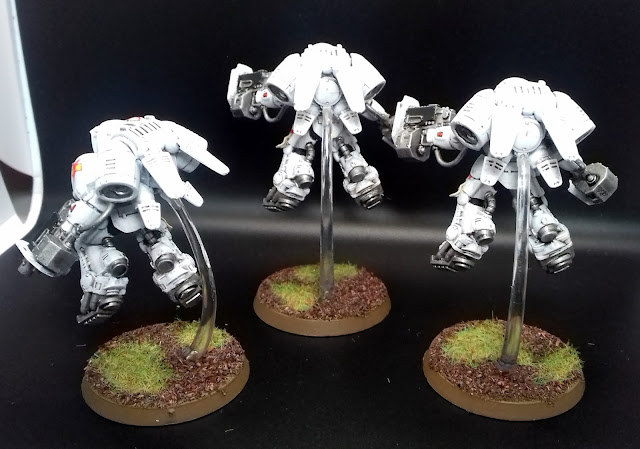 This past week, the blog hit 1 million views! I don't normally pay too much attention to the view count (mostly due to Russian bots and weird links boosting the numbers), but I've been keeping an eye on this target as it approaches.

2020 has brought a bit of a renewed interest for me in blogging. My number of articles were dipping for most of 2019, but I've been much more active with my painting and blogging in January, and hope to continue the trend through the rest of the year.

In other hobby news, 2020 will also bring a new first for me, as I start up my own gaming group.

I've been looking into doing this for a while now, as the club that I attend is on a Friday night and a good 45 mins drive from me. Due to changing personal circumstances this year, my Friday nights may not be as free as they once were, so I was looking for another outlet for my gaming needs.

As a result, Didcot Wargames Club will be opening in March. I'm looking forward to seeing how this venture goes, and if it will have enough interest to keep it going for the long term. Fortunately, I have enough terrain and mats to maintain a small gaming club, just on my own. However, there has been a good level of interest so far, so I'm hoping I will be able to grow the club in the coming year.

Check us out on Facebook if you are in the Oxfordshire or Didcot area and are interested in a new gaming night locally. If any other bloggers out there have experience with running a gaming club, please let me know of any lessons learnt over that time!

Email ThisBlogThis!Share to TwitterShare to FacebookShare to Pinterest
Labels: blogging

Today's hobby update is the Impulsor transport for my White Scars army. I took this to give my Primaris units a bit more mobility on the tabletop, as they were quite a static army.

I also magnetised the upgrade options to allow me to change the role of the tank on the battlefield. My first game with the Impulsor didn't really showcase its abilities much, as I outflanked it and the game finished early. However, I'm looking forward to trialing it out in my coming games. 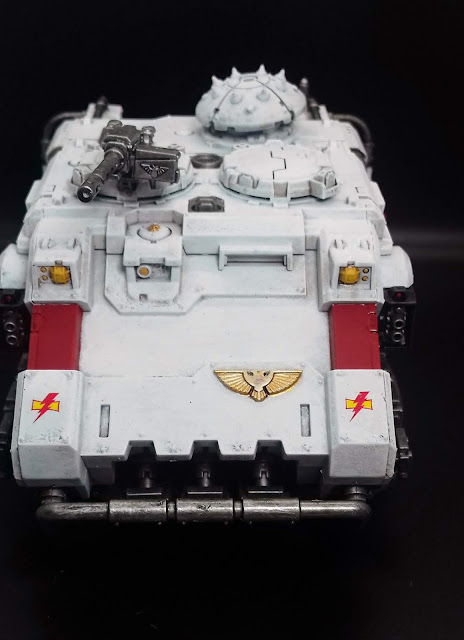 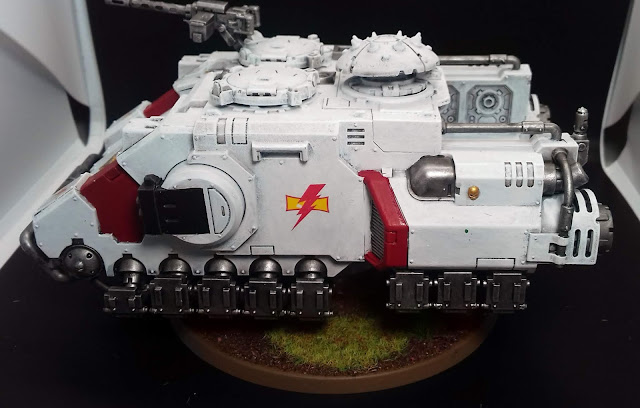 Today's Hobby Update features my Space Marine Primaris Phobos Librarian. I'm mostly using this for my White Scars army, but as the Librarian has a generic scheme, I could use him for my Dark Angels as well.

I'm not sure which psychic powers are best for the Phobos Librarian. If you run one, which powers do you find the most useful? 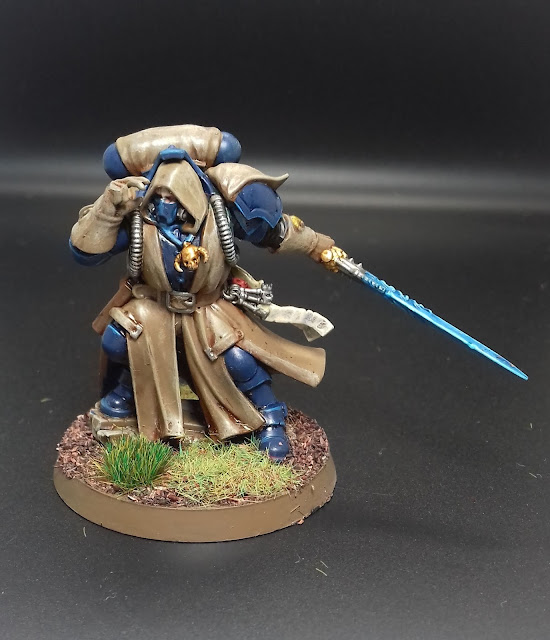 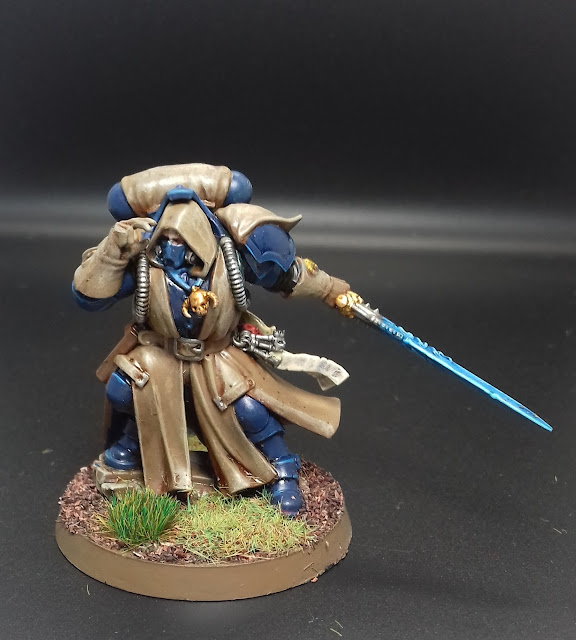 How to Magnetise the Space Marine Impulsor

This guide will show you how to magnetise the upgrade options for the Space Marine Impulsor, allowing you to equip it with either Ironhail Skytalon array, Bellicatus Missile Array, Shield Dome or Orbital Comms array. 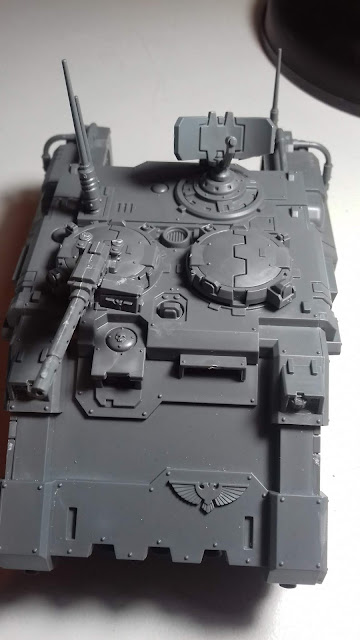 To magnetise this kit, you will need:


Assembling the model
All of the magnetising points used in this guide are for section 59 of the model; the extra part of the hull that attaches to fit the different upgrade options. As such, you can pretty much assemble most of the model without having to worry about the magnets (parts 1-3 of the assembly instructions).

Step 1- Hull Section
Drill a 5 mm hole in the centre circle section of part 59 (or a hole large enough for your magnet of choice). 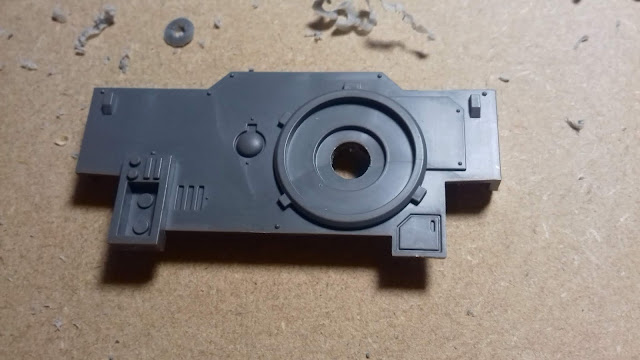 Email ThisBlogThis!Share to TwitterShare to FacebookShare to Pinterest
Labels: 40k, Hobby, how to, Primaris Marines

Today's Hobby Update features two squads of three Eliminators for my White Scars army. These two units will provide some useful sniper support for the army, able to take on enemy characters or units hiding out of line of sight.

I painted these up similar to my White Scars Sniper Scouts, adding static grass to the camo cloaks to blend in with the bases. 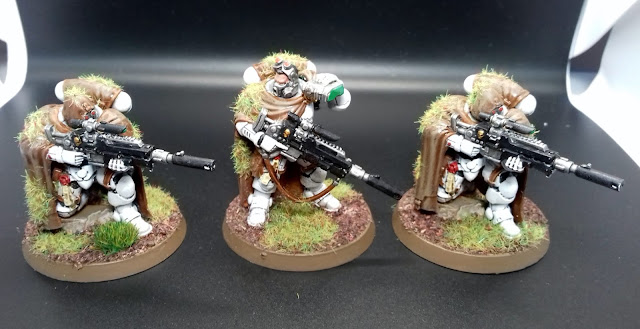 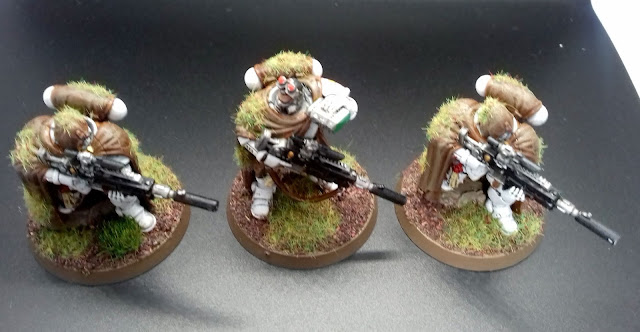 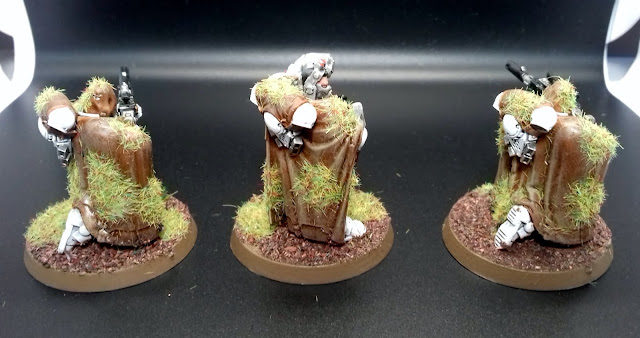 Today's Hobby Update features a couple of White Scars Primaris Infiltrator squads. These are a new addition to my White Scars army, and should provide some durable board control units for the force.

I finished up painting these at the weekend, along with basing them and putting on the transfers. 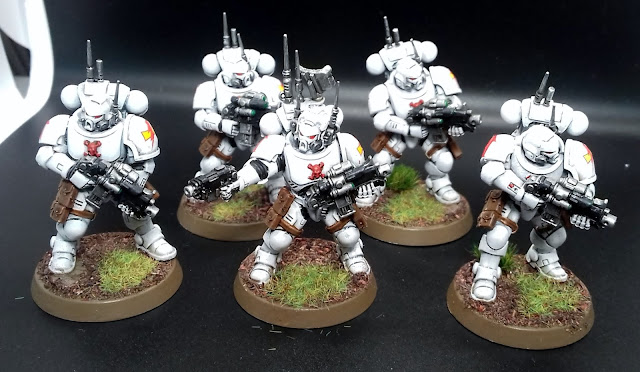 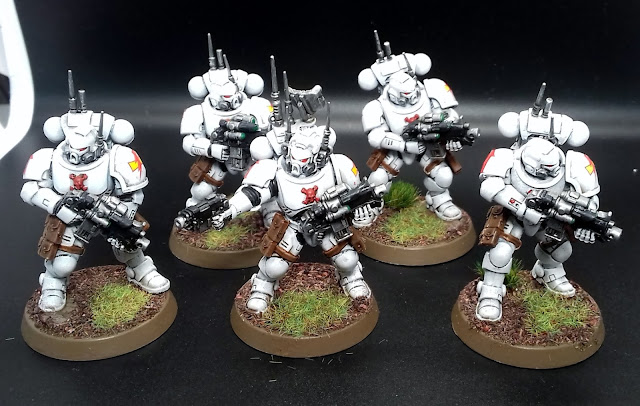 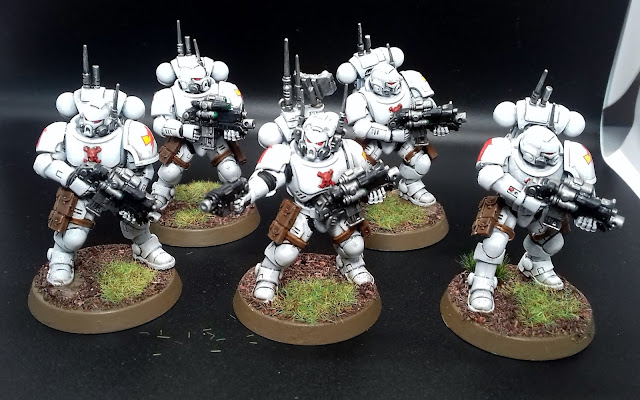 This week, I have been painting up a few units of Primaris Marines for my White Scars army. So far, I have got the base colours and washes on the two units of Infiltrators and Eliminators.

I just have the final highlights and bases to do for these units and they will be ready for my tournament in February. 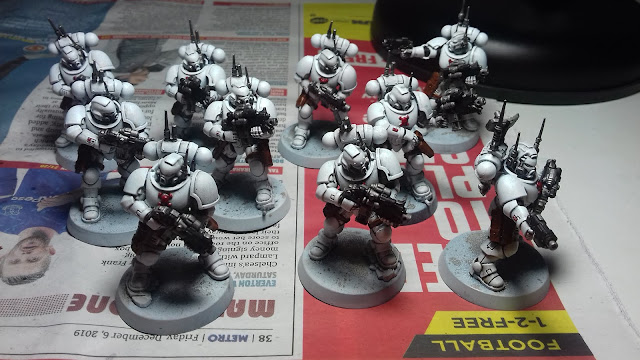 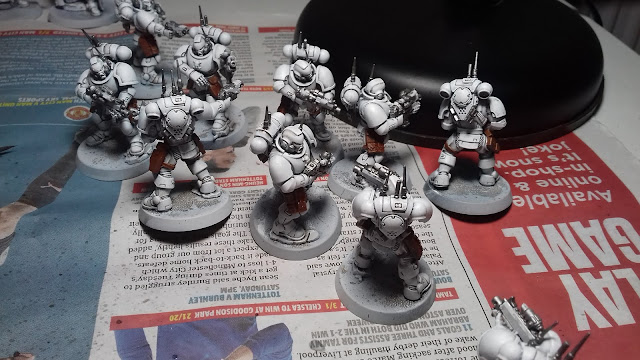 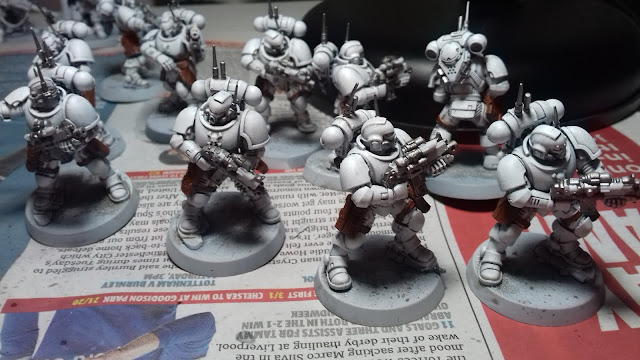 Today's hobby update are some models that I completed last year, my White Scars Intercessor squads. I got three units of five Primaris Marines painted up before a tournament last November. This past weekend, I added the transfers to the unit to finish them off.

The White of the armour creates a bit of a glare in the light box, so you can't see the details too clearly in the photos below. 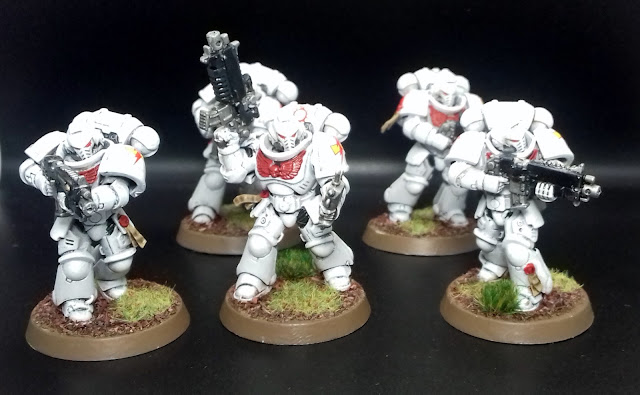 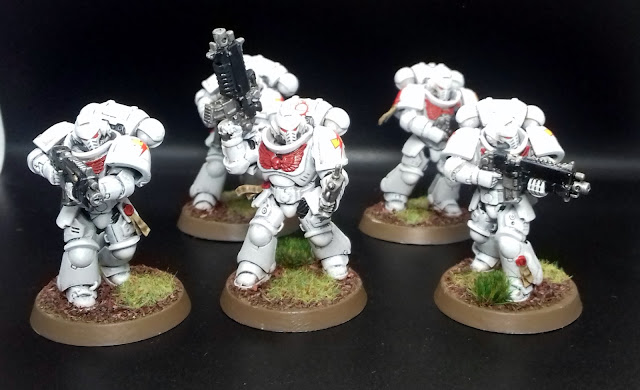 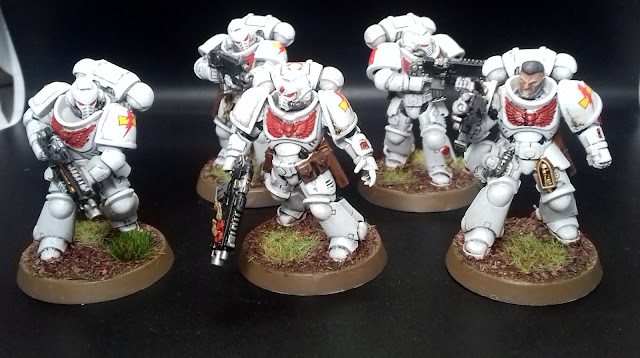 Today I have a battle overview of one of the tournament games I played at Reading Warfare last year. I actually meant to write these up ages ago, but lost the notes on the games, so only had the photos to go by.
It's hard to think this game was only played a year ago, as so much of the game has changed since them. 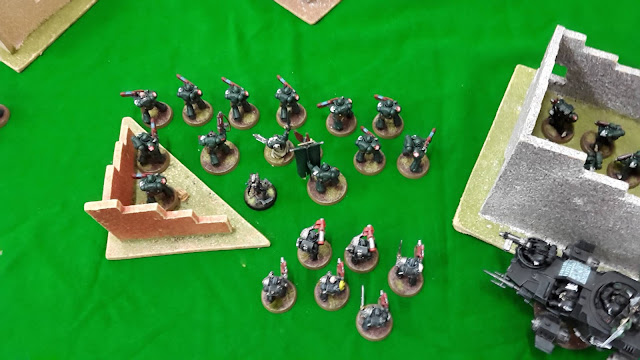 Here are some photos of the first game, where my Dark Angels and Deathwatch took on Daniel's force of Deathwatch and Astra Militarum. This was a custom mission for Warfare. In the first two turns, you scored kill points for killing units in your opponent's army. Then in turn 3, the player with the lowest current score gets to place two objectives, and these are worth 5 points each (if I recall correctly). This meant you could be at a disadvantage for scoring big in the initial turns.

I recently attended Warfare 2019 with my White Scars army. I have been developing the force since the release of the new codex and supplement, and it was proving to be a powerful force on the table top. The event was 1750 pts, and featured 5 missions from Chapter Approved 2018, a mixture of eternal war and maelstrom missions. 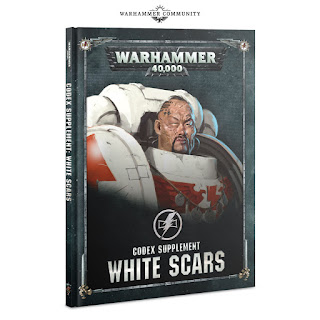 I'll take a look through the army and see what worked and what did not.

Captain on Bike
The Captain on Bike is one of the hard hitting combat units of the army. With the Wrath of the Heavens relic, he has incredible mobility on the battlefield, able to advance up to 22" and ignore intervening models and terrain in the movement phase.

With the ability to advance and still charge, this gives the Captain an incredible threat range on the tabletop. This allows him to get a first turn charge in most games, if I want him to. With the Chogorian Storm warlord trait and Shock Assault rules, this gives him between 6-8 attacks on the charge. This gives him incredible combat potential with the Thunder Hammer.

He was able to do a lot of damage on the charge in combat, dealing with many threats in the enemy army.

The Master of Snares ability is also very useful in games. It allows you to prevent enemy units from falling back from combat, keeping the Captain safe from enemy firepower in the enemy turn. You can also use his abilities to fall back and charge in your subsequent turn, thereby getting the most out of the Captain.

With using the Captain so aggressively, he can be slain by enemy army, giving up slay the warlord. However, he has a decent level of durability with the Storm Shield and T5, and can take on most threats in combat with ease.