This beast of a tank provides some strong firepower and transport capacity for a Primaris army. This model comes with a multitude of weaponry to target the enemy, including a twin Lascannon for taking on enemy vehicles.

In my first few games, this will probably transport my Hellblasters towards the enemy army. This should allow them to get into rapid fire range with their Plasma Incinerators to do maximum damage in relative safety.

The fact that the Repulsor has fly means that you cannot tie it up in combat to stop it from firing very easily. In addition, units trying to charge it need to add 2 to the charge distance, making it harder for them to get in. 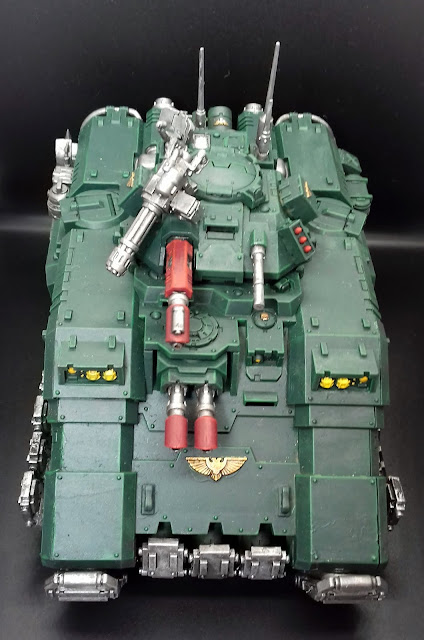 With most of the Genestealer Cult new purchases painted up, I decided to go back to my Dark Angels Primaris army. I had started on this model many months ago, but decided to finish off the Dreadnought this past weekend.

This is one of the "easy to build" Dreadnoughts, so is not armed with the optimal combination of weapons. The only thing I need to finish is adding the transfers to the model. 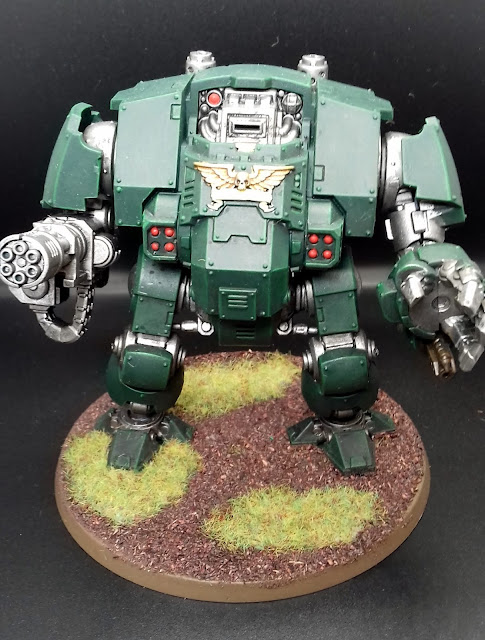 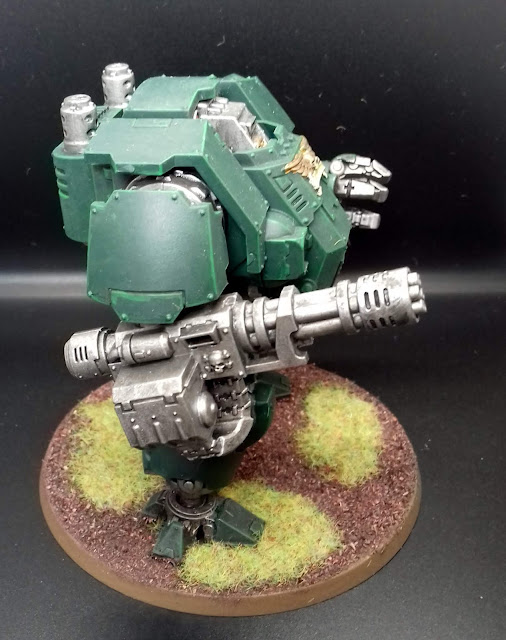 The final game of the day at the Rapid Strike 40k tournament would see my Deathwatch take on Chris' T'au on the top table.

This mission was Cloak and Shadows. In this mission, we get three cards per turn, but keep your cards secret from your opponent until you score them. 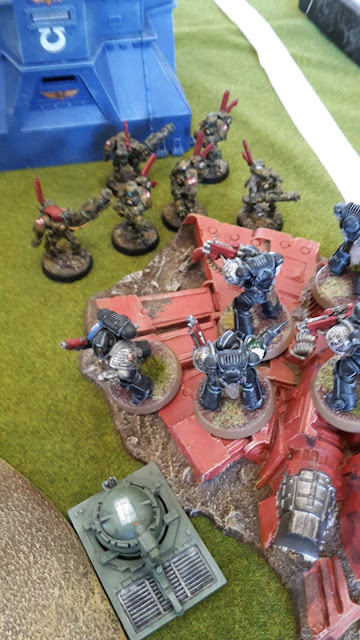 I get 6 command points for the army thanks to the tournament special rules.

A mixed T'au army with a lot of firepower. I was going to have to hope my power armour could keep me safe for long enough to hit the T'au lines hard with my own firepower and combat prowess.

This game was Spoils of War. In this mission, you get three cards per turn. You cannot discard any "Secure Objective X" cards and your opponent can score any of these cards in your hand at the end of the turn. 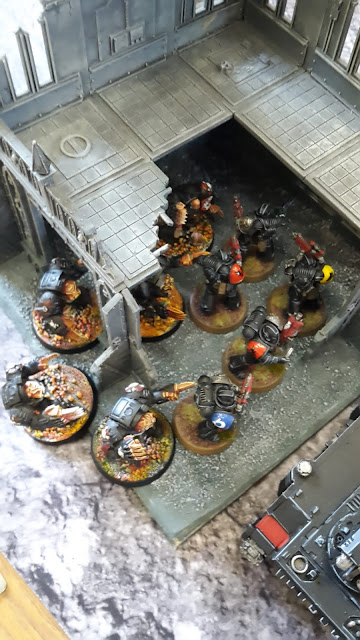 As per the tournament rules, I would have 6 command points to spend.

A small, elite force, mostly consisting of Terminators. When was the last time you saw that many Terminators in a tournament army? The Black Templars chapter tactics gave re-rolls to charge moves, which should help the Terminators get into combat. Alex spent 3 of his 6 CP to make a Chapter Master of his Captain, giving him full re-rolls to hit.

Game 3 of the 40k Rapid Strike tournament saw my Deathwatch take on a tough Drukhari force featuring a ton of Grotesques and Talos engines. 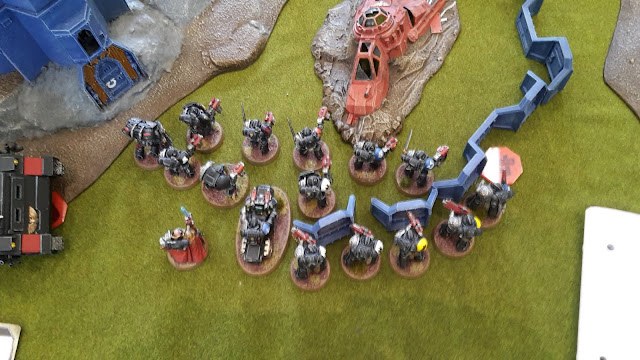 This game was Tactical Escalation, where you get one card on turn 1, two cards on turn 2, etc. This means you need to keep your army alive for longer in order to grab the objectives later in the game.

A combat-heavy army with a lot of Haywire firepower for taking on my one tank. Much of the army would have a 4+ invulnerable save, so my high AP rounds were of little use in this game. However, the Hellfire Bolts would prove invaluable to taking on the tough Drukhari units. I would need to hope that my superior firepower could make a dent in the enemy army before they get to my lines.

Game 2 of Rapid Strike would see my Deathwatch take on Khyl's Black Legion Chaos Space Marine army in the Contact Lost maelstrom of war mission. In this mission, you get one card to start with, then draw one card for each objective you hold (up to 6) from turn 2 onwards. 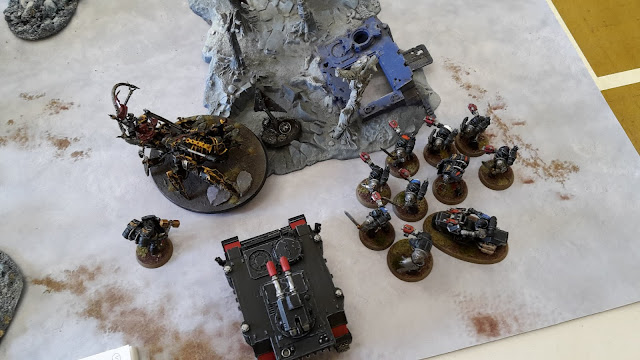 A Chaos force with a lot of infantry. The army featured a number of units from Vigilus that I had not faced yet. The Lord Discordant could prove to be a tough proposition, as could the Obliterators. It was a great looking Chaos army, and actually came in second in the best painted army competition.

The first 40k battle report from Rapid Strike 3.1 saw my Deathwatch take on James' Astra Militarum army in the Cleanse and Capture maelstrom of war mission. This was the standard 3 cards per turn maelstrom mission. 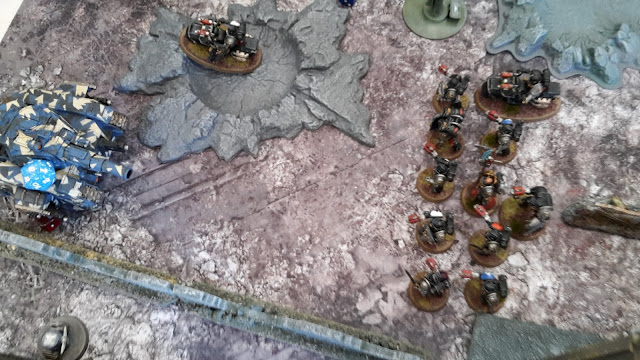 A vehicle-heavy army for my first game, not what I was looking for! This could be a tough contest, as I didn't have a lot of firepower to take on the Leman russ tanks. Hopefully, I could hide from their firepower for a while and take on the weaker infantry elements. The Tempestus units could also be a problem, with a lot of Plasma firepower to take out my Marines.

Welcome to my army overview from the Rapid Strike 3.1 tournament that I recently attended. This was a one-day, 5 games, 1000 pts tournament held in Reading. Each mission would be maelstrom of war, and had some tight restrictions for army selection.

At Rapid Strike, armies can consists of a single Patrol Detachment, with up to one auxiliary support detachment. The armies were "highlander" format, so each unit selection can only be used once in the army. Unit entries that were allowed multiple units per force organisation slot, such as Leman Russ battle tank squadrons, were only allowed to take a single unit in each case. Marine units were still allowed to combat squad.

Each army also started with 6 CP instead of 3 to make up for the limited detachment selections. However, players could not use a command re-roll stratagem with their CP. Instead, players received 5 free command point re-rolls that could be used over the course of the 5 games. That was it, only 5 CP re-rolls for the entire day!

This sounded like a fun format to try. I'm a big fan of maelstrom of war missions, and liked the army choice restrictions. I figured the Deathwatch would be a nice force to take to the event. The additional wargear choices for units and the special issue ammunition should allow me to deal with a wide range of threats I could deal with. That and the fact there would be no Imperial Knights meant I was looking forward to this one.