Today's Hobby Update sees my completed Atalan Jackals unit for my Genestealer Cults army. This unit has been armed with Shotguns, a grenade launcher and demolition charges. This should provide a mobile unit for the army, with some decent firepower. 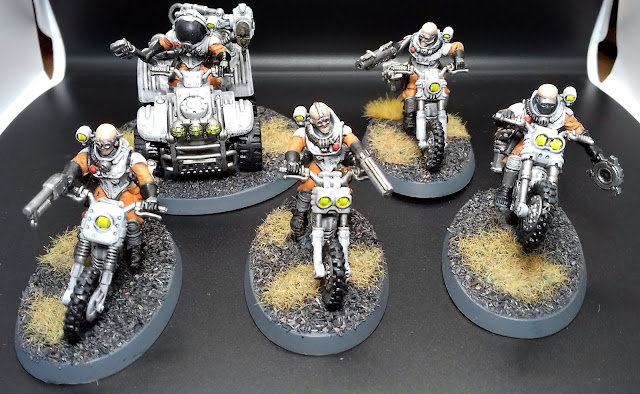 Here are some WIP shots of the models. 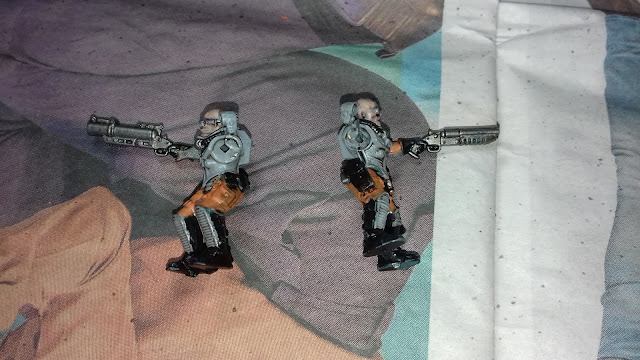 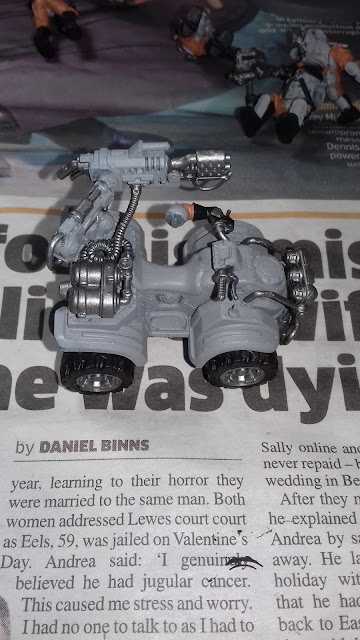 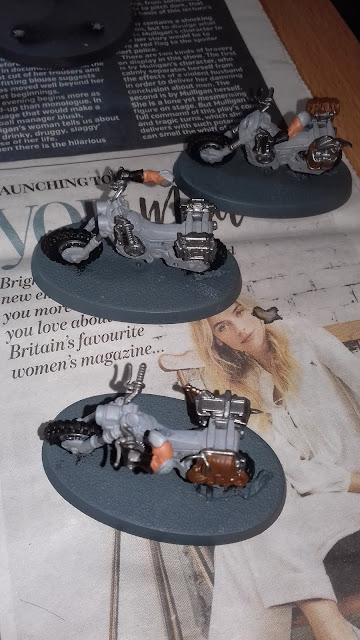 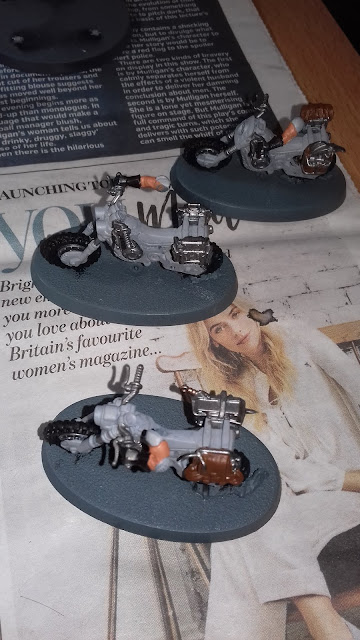 The recent FAQ removed the ability of Deathwatch units to use Special Issue Ammunition and the new Bolter Discipline rule in combination. This has led many Deathwatch players to ask which is better to use in which situation? I've run the numbers and here is a rough guide to what Bolter type to use against a variety of foes.

In each of the tables below, the average number of unsaved wounds caused is listed for each ammunition type against a range of common model types. Each example assumes that the shots are being made out of rapid fire range, so single shot for SIA and two shots for Bolter Discipline. In addition, the effects of re-rolls (Watch Master, Watch Captain or Mission Tactics) are not taken into account. It also assumes the unit did not move, in order to gain the benefit of Bolter Discipline.

EDIT- This information only applies at long range and not at rapid fire range, where Bolter Discipline has no effect. I did not feel the need to spell this out, but a lot of people have been commenting to point this out in other groups that SIA is better at rapid fire range. I didn't feel this was necessary to specifically point out as I thought it was an obvious conclusion, but do so now just in case there was any confusion.

As can be seen from the table, the Bolter Discipline is better or equal to Vengeance Bolts in almost all situations. Only for models that are T5 or above (and not vehicles) are the Hellfire shells a better option. Once you factor in re-rolls, the Bolter Discipline is superior, simply due to a higher number of shots, so more chance of getting to use re-rolls.
Read more »
Posted by Mike (St Andrews Wargaming) at 11:55 11 comments:

Today I have another video battle report for you. This warhammer 40k battle report sees my Deathwatch army take on Mike's Farsight Enclaves Tau army. This was a blast of a game, very strategic and tactical. Remember to like and subscribe to the channel if you enjoy the games to keep up to date on all the latest reports.

This week's battle report sees my Genestealer Cults take to the field once more to take on Angus' Sisters of Battle and Astra Militarum force. This was a 1750 pts battle, as Angus wanted to practice for Vanquish, a tournament held in Bristol last weekend.

We randomly rolled for each mission. For the Eternal War mission, we got Vital Intelligence. In this mission, there are 5 objectives. At the start of each battle round, roll a D6. The corresponding number is the active objective (on a 6, all objectives are active). At the end of each battle round, players scored a point for each objective held, getting 2 points for the active objective. In this game, I think we forgot about only having 5 objectives, so scored for objective 6 as well. We also varied the objective placement, different from the places specified in the scenario. 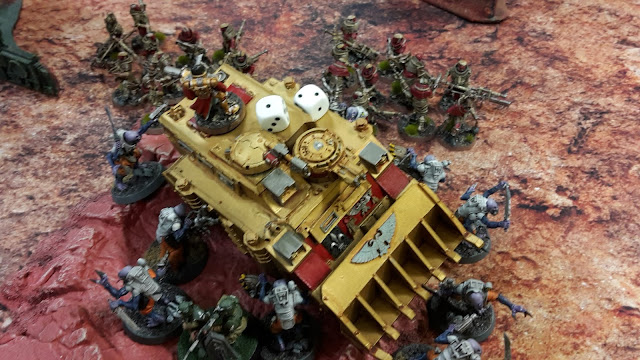 The maelstrom mission was Disruptive Signals. In this mission, you draw up to four cards per turn. This mission features the Signal Intercept stratagem. For 1CP, you can select a card in your opponent's hand and they cannot score it for that turn. We were also using Dawn of War deployment.

I decided to mix up the army now that I have the new characters to add to the army. I went with double Battalion and Vanguard detachment to give me 14 CP to start with. I took the Broodcoven stratagem to give my three characters warlord traits. The Patriarch took -1 to hit, the Primus took the +3" to aura abilities and the Magus took +1 strength and attacks. I also took an extra Relic, taking the sniper rifle relic on the Sanctus and the Crouchling on the Patriarch.

The new characters were the two Clamavus, the Nexos, Jackal Alphus and Sanctus. These should hopefully provide some nice buffs and abilities to the army. I decided to take a big unit of Aberrants to take on any vehicle threats in the enemy army, along with trying out a big unit of Acolyte Hybrids.

Today, I have a few models that needed finishing off, namely some Neophyte Hybrids, Acolyte Hybrids and Familiars. 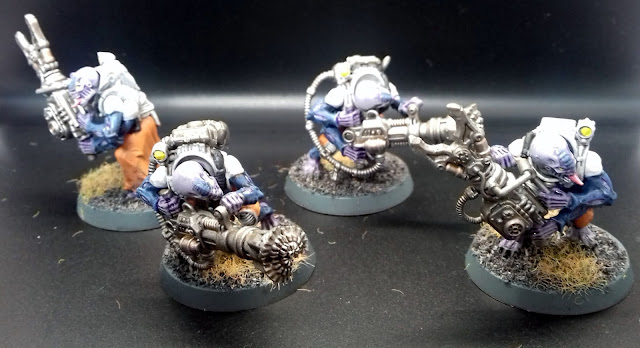 I had painted up the Neophyte and Acolyte Hybrids a while back, getting up to the first highlight stage with the models before stopping. While painting up the new characters, it was a perfect time to finish off these models.

The Neophytes are just armed with Autoguns and can be used to expand my squads I already have. 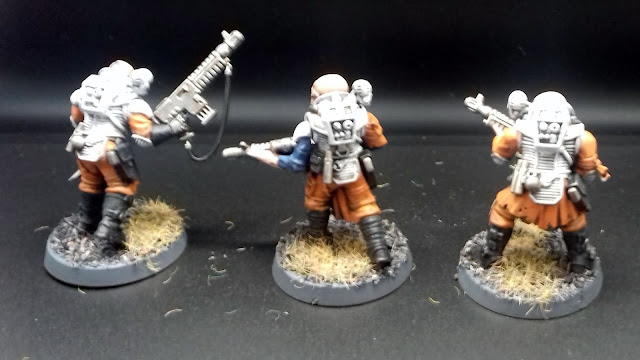 Another hobby update for today sees my completed Sanctus for my Genestealer Cults army. This model is a great Assassin for going after enemy characters, particularly Psykers.

Again, this model features a pretty simple colour scheme. I decided to go with the blue overalls and a black camo cloak for the Sanctus. I figured that the bright orange overalls would look a bit out of place on a model that was meant to be stealthy. 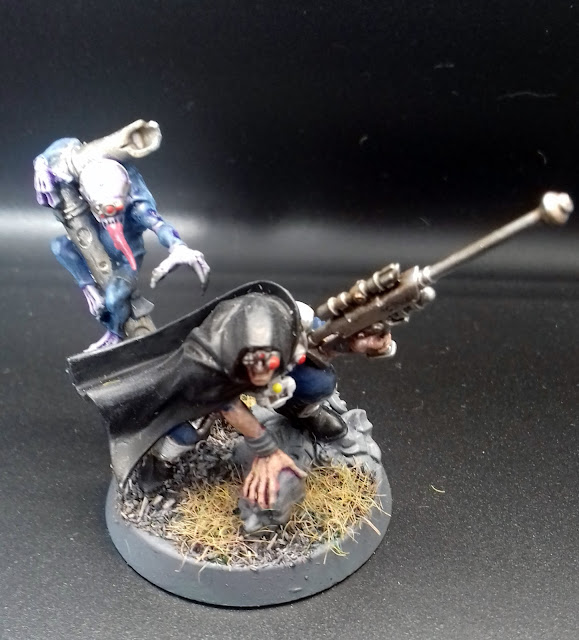 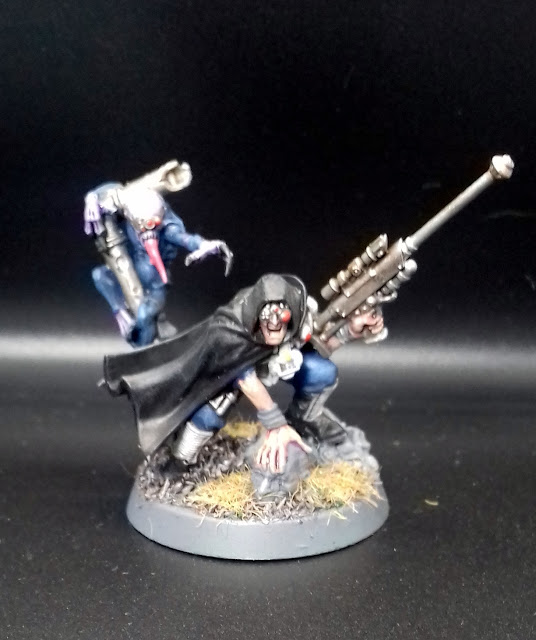 Today for my hobby update, I have the completed Jackal Alphus for my Genestealer Cults army. This was a great model to paint up, and I am looking forward to getting the other Jackals in my army painted up, not just because they are pretty good on the table, but that doesn't hurt.

I used the standard scheme, which I think works quite well. The orange breaks up the grey and metal of the miniature as a whole. I think the details on this model mean that a simple colour palette works quite well with it. 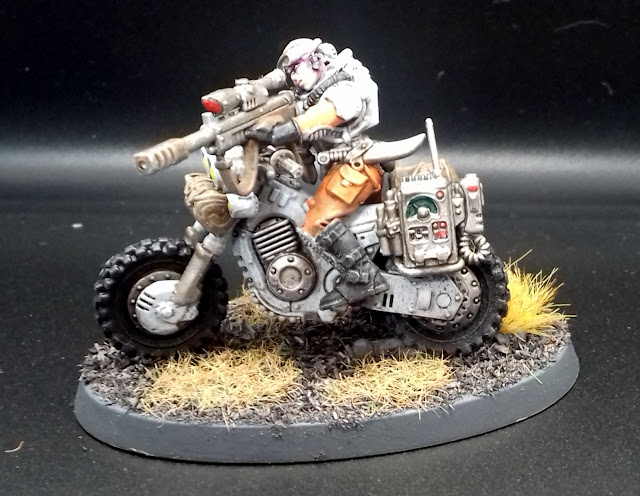 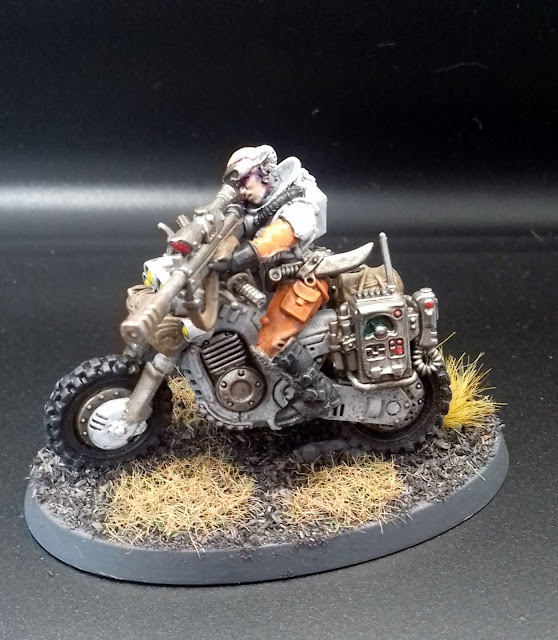 Today's hobby update sees the completed Nexos for my Genestealer Cults army. The Nexos is a command points farm for the army, his only real purpose is to gain CP back for the army.

I painted this up in the standard colours for my army; orange clothes and light grey armour. I kept the display panel simple, only a green outline with highlights and picking out the buttons on the console. 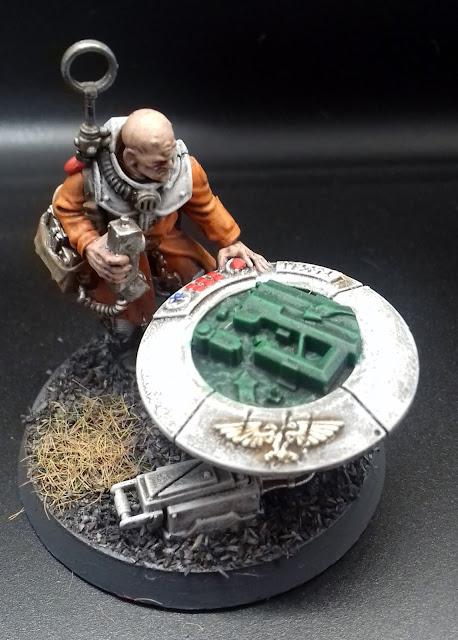 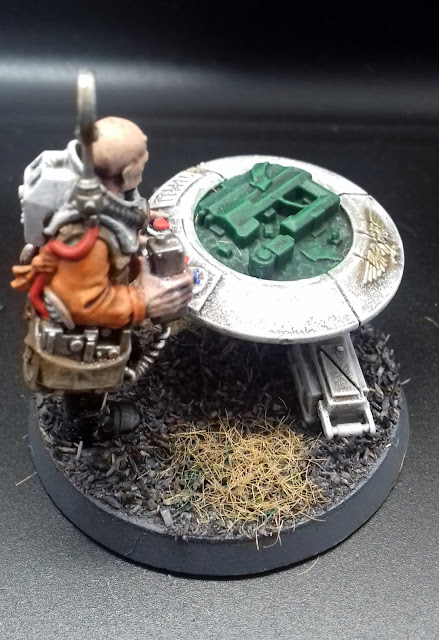 Today, I have the two completed Clamavus (Clamavuses, Clamavusi?!?) for my Genestealer Cults. Much like the Primus and Magnus before, I painted one in orange overalls and one in blue overalls to help distinguish between them on the battlefield.

These two will provide some nice boosts for the army, giving nearby units +1 to charge and advance moves, as well as +1 Ld to help with morale. They also prevent enemy reserves from deploying within 12". In addition, they can belt out some bangin' tunes with those sound systems! 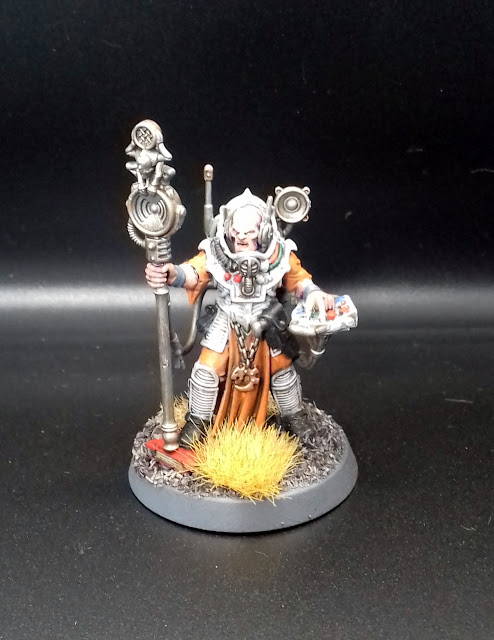 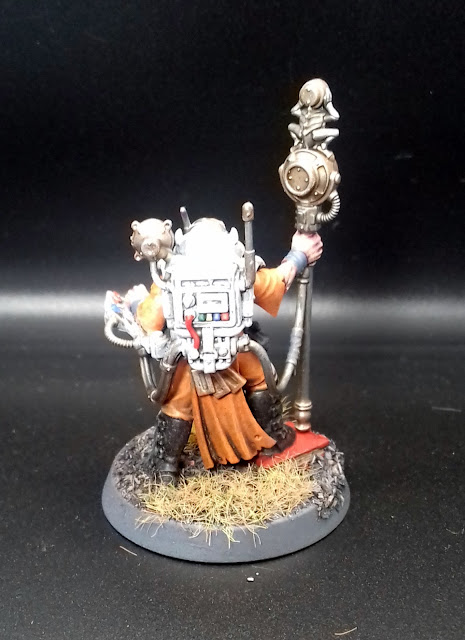