I managed to get some more work done on the new Genestealer Cult characters, painting the flesh and adding some of the highlights to the robes and suits.

I also did some work on a few Familiars, Neophyte Hybrids and Acolyte Hybrids that were waiting around for finishing. 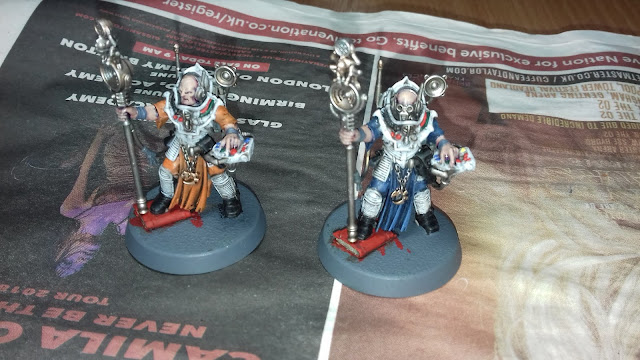 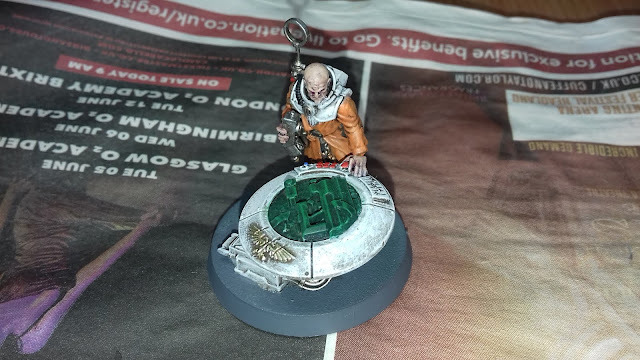 This past week, I have been painting up some of my new characters for the Genestealer Cults army. These characters are badly needed in the force to give me some nice buffs to the army and I am looking forward to getting them on the tabletop.

I have painted up the characters together in a batch to get them done quicker. I've done the basecoats, washes and some of the highlights so far. Hoping to get the rest of them painted this week for a game on Friday. I've also got a few Acolyte and Neophyte hybrids that I wanted to finish off as well. 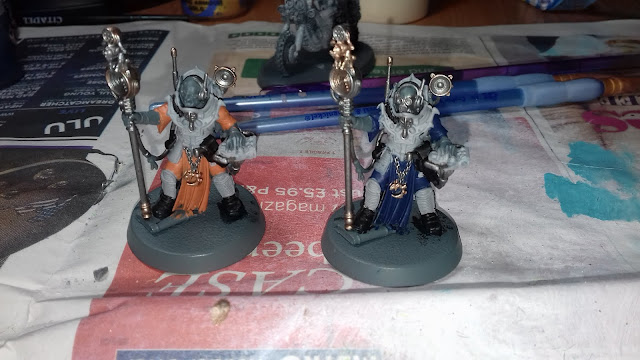 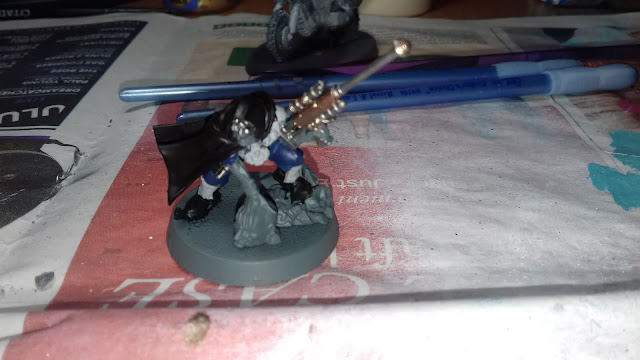 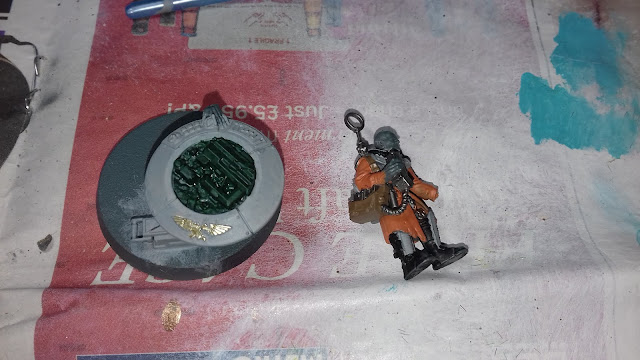 Today, I have a new video battle report. This sees my Genestealers Cult take on Chris' Space Wolves army in a maelstrom of war mission.

Hope you enjoy!
Posted by Mike (St Andrews Wargaming) at 09:00 No comments:

This week's battle report sees the first outing for my Genestealer Cults army with the new Codex, taking on Chris' Salamanders Space Marine army in a maelstrom of war mission. 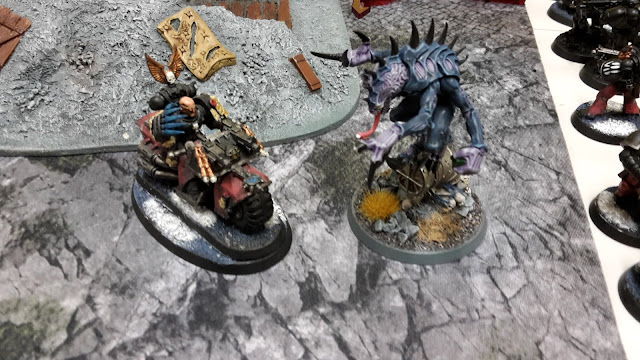 We were playing the Tactical Cascade mission with Search and Destroy deployment. In this mission, you pick the first two maelstrom cards you wish to score. In each subsequent turn, you draw two cards for each maelstrom card you scored in the previous turn, up to 6 cards in total.

I chose the Cult of the Four-Armed Emperor for the additional charge distance and advance distances, as well as the Vect-type stratagem, "A Plan Generations in the Making".
It wasn't until I had the army made that it was pointed out that you can only have one of each character in a detachment. I had completely missed this rule when reading the codex, so played with the army I had made. I have no idea why this is a necessary rule.

For the HQ units I took a Patriarch and two Magus and Primus. I used the Broodcoven stratagem to give three of them warlord traits. The Patriarch got -1 to hit, the Primus got +3" to his aura abilties and the Magus got a free re-roll and a bonus D3 command points (I got three bonus CP in this case). I took a spread of the new psychic powers in the force to try them out. 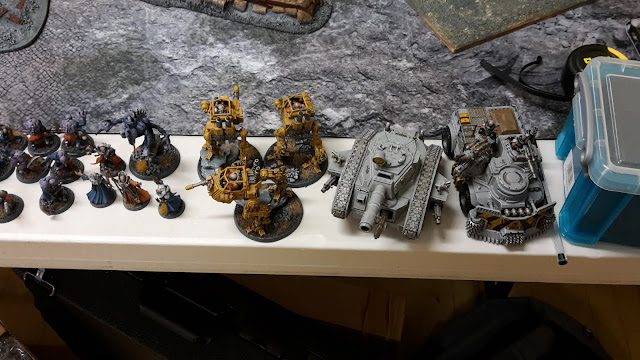 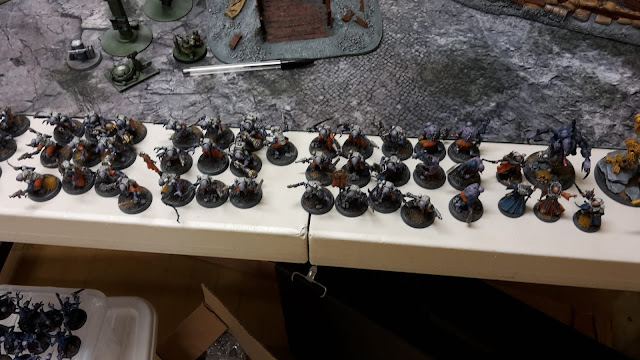 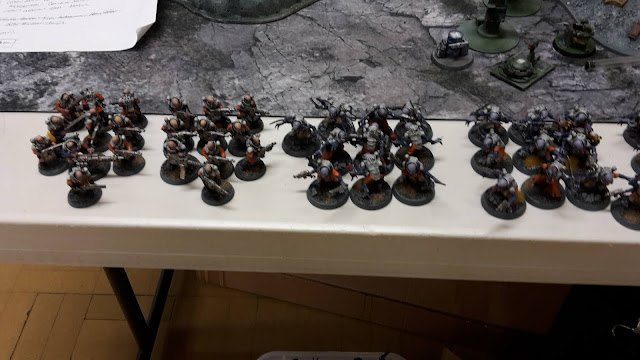 For troops, I took four units of Acolyte Hybrids with heavy weapons and two units of Neophyte Hybrids with some heavier firepower. I was keep to try out the Demolition charges on the Acolytes to see what havoc they could wreak.

For Elites, I went with two units of Genestealers for taking out the enemy forces and a unit of Aberrants with Power Hammers to deal with any armour in the enemy army. I kept the Fast Attack choices cheap with three sentinels, armed to give me a bit more armour-busting potential.

For Heavy Support, I took the Leman Russ and the Goliath Rockgrinder to try out its boosted combat potential. I also took a Heavy Weapons Team armed with mortars for some good firepower that I could hide out of sight.

It's been a while since I've posted one of these! (October last year to be exact). With the release of the Genestealer Cults codex, I picked up a number of new units to add to my force. These were mostly some of the new buffing characters that are available to the army.

This weekend, I finally got round to assembling the new units, ready for painting. First up, we have two of the new Clamavus models (Clamavuses, Clamavi?!?). These units provide some great buffs for the army, giving you +1 to charge and advance rolls in range, as well as a leadership bonus. Two of these should be a big boost to charging units, especially with the Cult of the Four-Armed Emperor Cult Creed. 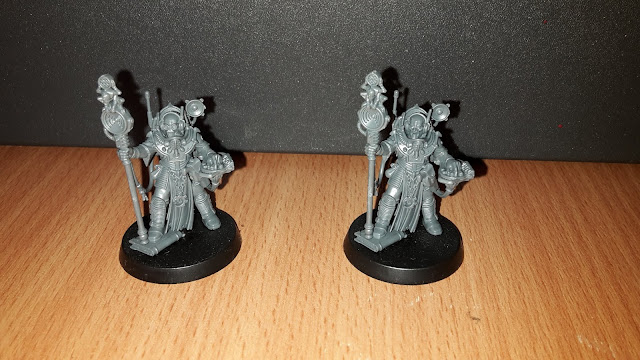 Next up, we have a Sanctus. I wasn't aware that the kit came with the sniper rifle variant, as only the knife variant has been pictured so far, so I was happy to have the rifle, as I think this is the better option. 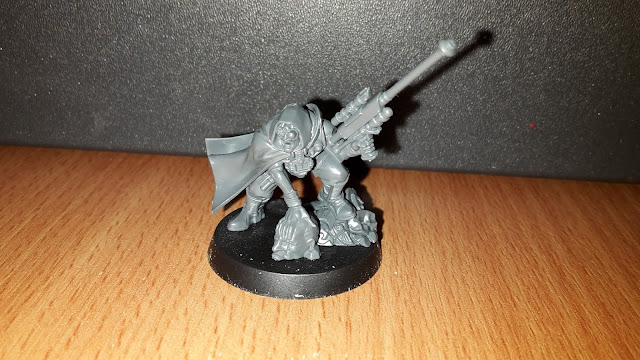 Welcome to my review of my Deathwatch army from the recent North East Open tournament. This will look at how the army performed and what changes I could make to the force in order to try and improve my performance. I will also be reviewing the tournament itself, taking a look at what was great about the event and which areas could use improvement. 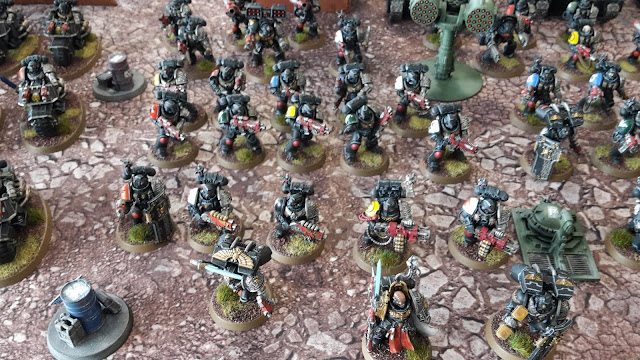 The tournament did not allow double detachments, otherwise I would have started with a couple of Battalions to give me access to more command points. As it was, I started with 9 command points, but only 6 really after using the three command points on the Teleportarium stratagem that I need to use to get my reserves set up.

The Watch Captain is still a solid addition to the army. He provides some great re-roll buffs to the force and tends to shadow the Storm Bolter Veterans, and the Meltagun Veterans in this list.

The Smash Watch Captain is also a nice addition to the list. He provides some strong melee support for the army, able to do a lot of damage to an enemy unit in combat and has some decent durability thanks to the Storm Shield.

The final Watch Captain tended to hang back with my firebase. With the Tome of Ectoclades, I could pick the key Mission Tactics re-rolls for my anti-tank firepower each turn, as well as getting re-rolls of 1's to hit in the shooting phase. As my warlord, he was able to stay relatively safe at the back of my deployment zone, but has the mobility with his Jump Pack to move out and threaten the enemy army if necessary.

I would consider making the Smash Captain the warlord and give him the trait that makes his Thunder Hammer 4 damage. Coupled with the +1 to wound stratagem, this may give him some strong combat ability to go after Knights or other enemy vehicles.

Kill Teams
The Storm Bolter Kill Team is a key part of the army. The firepower that this unit can put out is incredible, able to decimate most enemy units with ease. With re-rolls to wound and the +1 to wound stratagem, they can do a lot of damage to an enemy Knight warlord if you can position them right.

I would probably look to add more Storm Shields to the unit. They are cheap enough to equip everyone in the squad and give me some very strong defensive abilities against units such as the Castellan.

In a change from my normal gameplay, I chose to keep the Intercessors on the board in all three of my games. I normally put these in the Teleportarium at the start of the game. However, I decided to have the Meltagun kill team take the second spot in this tournament. The change to the Bolter rules meant that the Intercessors could still put out a lot of strong firepower at ranges up to 36", so there was good use for them in my games. I would consider adding another squad to help me grab objectives and give some strong firepower in the future.

In this list, I added a Kill Team with 4 Meltaguns in order to give me some anti-tank firepower. I thought they would help me to take on Knights and finally do some damage to them. However, this proved to be much less effective than I had hoped for. The ability to easily access a 3+ invulnerable save on a key Knight means that single shot anti-tank weapons are much less effective than they should be. In order to have a decent shot, I would probably need to go for a whole squad of combi-Meltas, which would get ridiculously expensive. Plus, they would only get one turn of shooting before being targeted and eliminated with ease in most cases.

The Missile Launcher Kill Team was also a new variation. With the reduction in points for the Cyclone Missile Launcher Terminator, he is now a good addition to the army, giving the squad four Missile Launcher shots, as well as a 2+ save against small arms fire. The squad performed pretty reasonably, able to take on a number of vehicle threats. However, any invulnerable saves still prove difficult for them to take on.

The Heavy Bolter Kill Team was a new addition. I took these to allow me to use the Hellfire Shells stratagem, giving me the chance to do more mortal wounds to tough enemy targets. This squad was ok, but didn't really do much in my games. The lack of command points in the force meant I couldn't use the mortal wounds stratagems too often, limiting their use in my games.

Here are photos of some of the armies that were present at the North East Open tournament that I attended a while back. 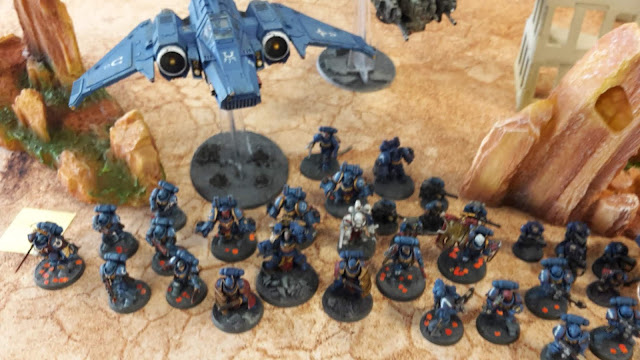 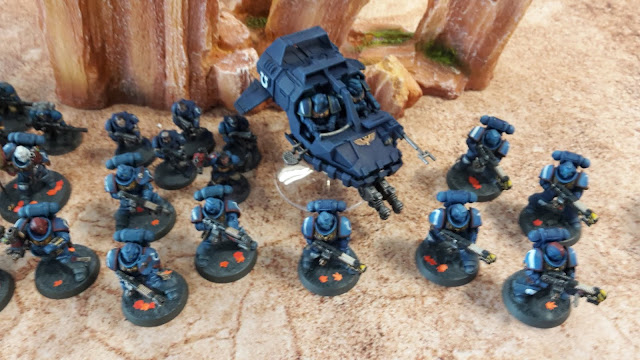 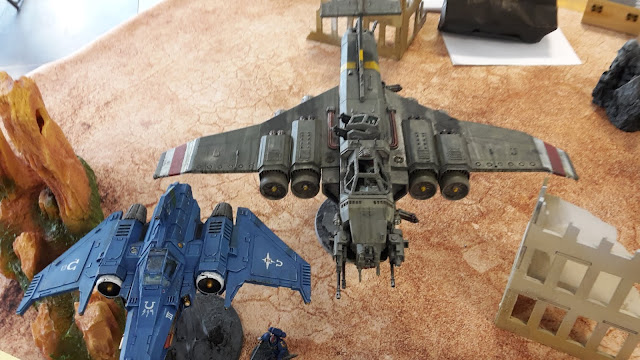 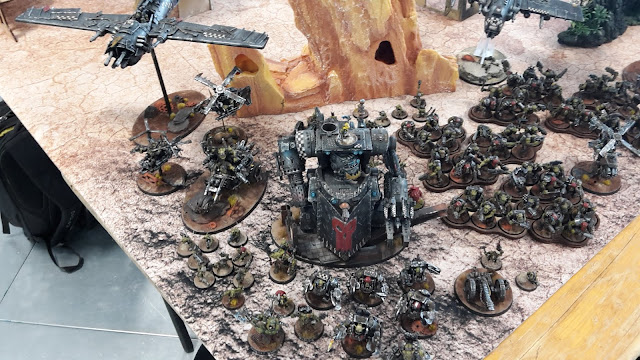