With the new codex about to drop (already pre-ordered mine!), I thought it might be time to show my own Dark Angels army. Today I will be focusing on the main body of the Dark Angels army, commonly referred to as the Green Wing.

Dark Angels were my very first Warhammer 40k army. It all began with the contents of the 3rd edition boxed set, a tactical squad and a landspeeder. I chose the Dark Angels as I had seen the army in White Dwarf several times and liked the colour scheme, as well as the different coloured armours for the Ravenwing and Deathwing. My collection has been expanding with each new edition of the game and I was happy to see the original chapter get some love from the Dark Vengeance boxed set. There is a mix of classic models (check out the old school Rhino and Whirlwind) and some newer ones as the collection has expanded.

The army has seen a tough time in the last few codices. Being released before the main marine codex has made the Dark Angels feel like a testing army, they haven't got access to the fancy new weapons or new kits that the other marines have had access to. They did get their own exclusive kits and weapons, as well as some amazing looking models, but they always looked better than they tended to play on the tabletop. The rumours of the new codex have given me some hope, and I look forward to my army taking to the battlefield once again.

One standout memory was purchasing and painting the Landraider when it was first released. This model changed the game for marine vehicles. Never before had a tank featured such a detailed interior and intricate moving parts such as the front ramp. The fact that the tank is still in use today and has influence every marine vehicle that has come since shows what an important model it is.

My standard army tended to focus on balance, with tactical marines and devastators supported by a few tanks and some assault marines. My force was frequently led by an Interrogator Chaplain. He would be on foot with some tactical marines or with a jump pack to support the assault marines. Back when the Crozius Arcanum was a power weapon (ignoring all armour), the Interrogator Chaplain ran supreme, chopping down heretics and traitors with unfettered fury. Since his mighty weapon was downgraded to AP4, he has been a bit limp in combat against other marines (chaos or Imperial) and has not seen so much action recently.

My Interrogator Chaplain was one of the first conversions that I tried. I loved the Cypher model when it was first released and wanted to use the great pose for one of my own commanders. The model uses the legs of Cypher and body and head of Asmodai. I also repositioned the arm to have the Crozius Arcanum pointing at the enemy instead of the sky. 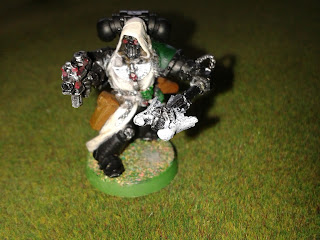 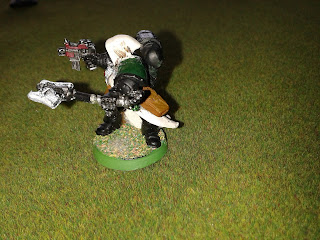 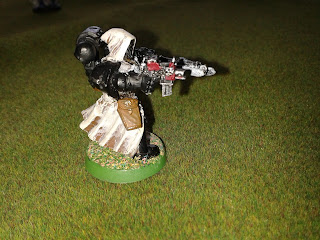 My Dark Angels most recently took part in an Apocalypse game.

Tomorrow, I will be showing my Ravenwing army.
Posted by Mike (St Andrews Wargaming) at 09:24