Welcome to the third article of my (hopefully) ongoing series- Better Know a Blogger. In this series, I am asking various 40k bloggers to ask some set questions to get to know them a bit better and see what got them into the hobby and what makes them tick.
This week, Luke from Darksun Life takes the time to answer my questions. I first got to know Luke on the 40k addicts facebook page, he was one of the first commenters on my blog and has been a regular contributor to the comments section ever since. When I travelled down for Blog Wars 9, Luke was kind enough to invite me to join him and his friends from the Leicester Sabres to hang out on the Friday evening before the tournament for some practice games and a few drinks. What his friends found really amusing was that we had no idea about what each other looked like, so everyone that walked into the gaming centre was met with a "Mike?", "Mike?", "Mike?" from Luke until I arrived. Perhaps we should have arranged to wear carnations or a specific coloured tie.
At the tournament, Luke and I had a practice game on the Friday night and actually ended up playing each other the next day at the tournament on the same mission. He beat me both times, but the first practice game definitely helped to make the second game much closer game than it could have been. His great looking Howling Griffons Space Marine army was ably commanded and gave me some great tips for using combat squads and drop pod.
Luke started blogging back in 2009, writing about his 40k armies that were based on Star Wars until 2012. In 2015 after a three year hiatus, Luke started blogging once more and has become a regular addition to my reading list since then. 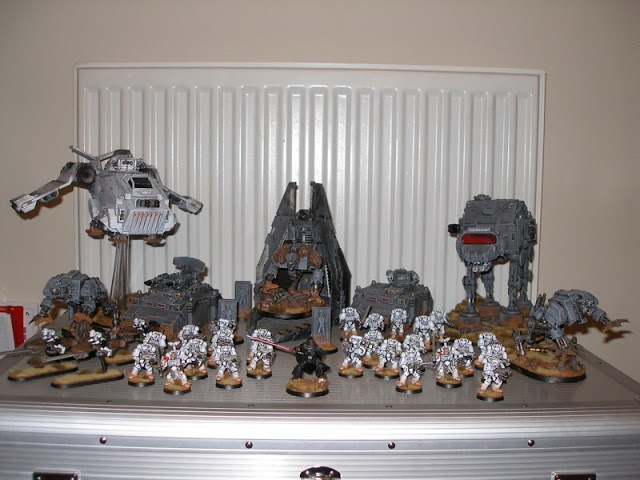 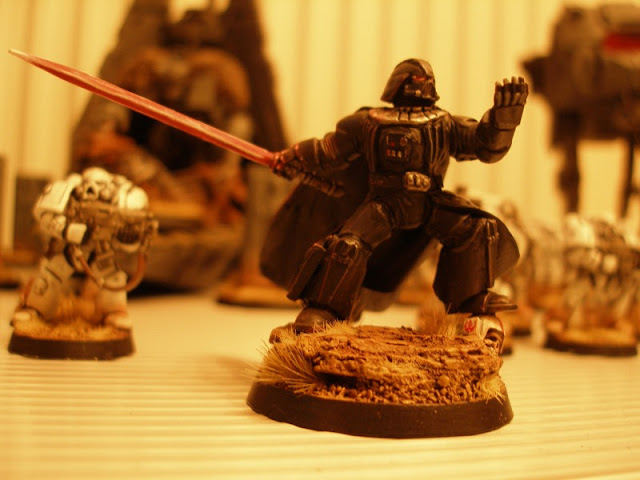 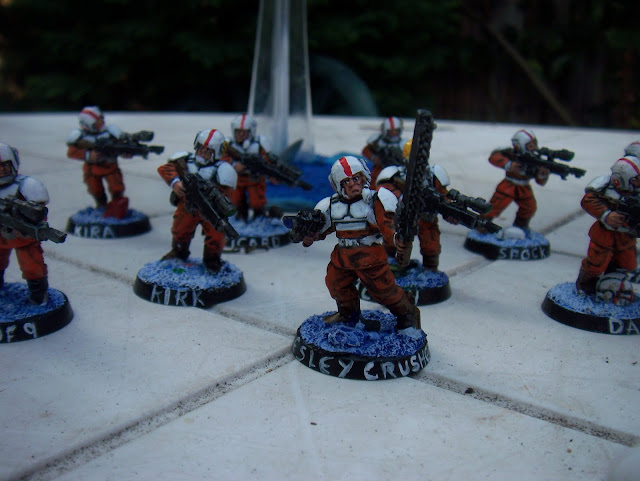 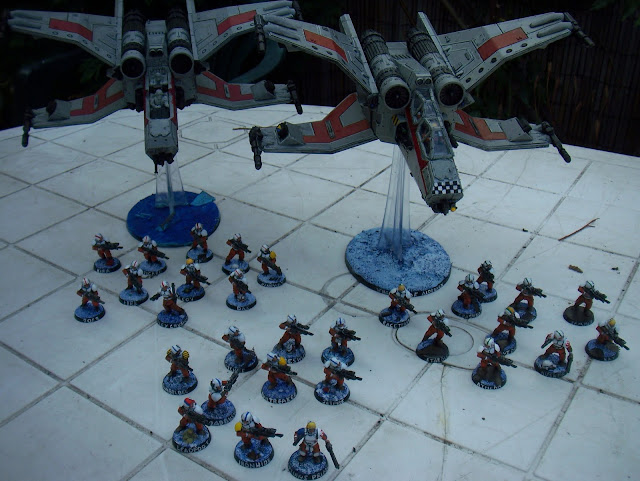 Since then, Luke has been detailing the work he has been doing on his Howling Griffon Space Marine army, as well as his tournament successes in 40k. Darksun Life also stands out amongst other 40k blogs as it has a strong focus on X-wing as well, (with Luke showcasing his ship repaints and battle reports), as well as Luke's regular Vlogs where he talks about various different aspects of his hobbying.


1. What age did you get into gaming and what started it off?
I started gaming in my final year of primary school, so I would have been 10-11. My best friend Nick Westbrook got me into it! I can actually remember being in my room, and looking out my window and thinking, "well, you've got yourself another customer. I'm in!".


2. What was the first model you ever bought/painted?
Some Space Marine Bikes. I still have them somewhere! I put the guns the wrong way round in the housing and it took me weeks to notice that I'd done that. Of all my models I've ever owned over the last 19 years, I probably have 80-90% of them. Whilst these were the first models I ever bought, the thing that really captured my imagination and got me hooked was Necromunda. If I'm honest, in my opinion it is still the best game that GW ever made. I know its probably slightly rose tinted, but it had everything.

A lot of the stuff now (Space Hulk, Deathwatch, Assassins boxed game) follows that model of boxed game, with campaigns. But Necromunda had it all- experience, consequences for injuries, campaigns, deaths! And it was set in such a rich background, I'd never heard about Hive worlds, what were they? The Underhive? What really goes on above the Hive wall? Man, I think I'm gonna have to blog down memory lane now.........
3. What is your favourite aspect of gaming?
Errr.....Winning? Tournament gaming? Is it ok to say that? I'm not win at all costs, and I'm not good enough to win all the time, but I am very competitive. To the point where I spend at least an hour a week on my fantasy football, because I want to do as well as I can do. It was bugging me when I was 10th out of 10, and now I'm 4th, trying to break into the top 3!

I love the rush that you get in the moments leading up to meeting your opponent. What army will they have? What will they be playing? How will they deploy? I think because in the run to tournaments I put so much effort into making sure I'm as prepared as possible, it really matters to me how I do on the day. The last minute painting late into the night, the going away fro the weekend with the lads, representing your club at a higher level. These things all make a tourney for me. Gosh, I feel like I'm bearing my soul a little!
4. Fondest memory in gaming?
Playing in 2 tournaments at Warhammer World for my 14th and 15th birthdays. I can't place which year it was, but me and Nick Westbrook went to a couple of campaign weekends, one each year. The first one I think I lost all 5 games over the weekend, and then the second time I lost 3 games on the Saturday. Going into the Sunday I was pretty bummed about how me and my 4th edition Space Wolves were doing at the home of my hobby. And then I won not 1 game, but 2! I felt 10 feet tall. I can still remember getting into the car that my mum picked me up in and saying to my sisters and mum, who knew I'd been a bit down, and saying "well, aren't you going to ask me how I did today?!?!". I think that's why I love going to tournaments, because it reminds me of moments like that. 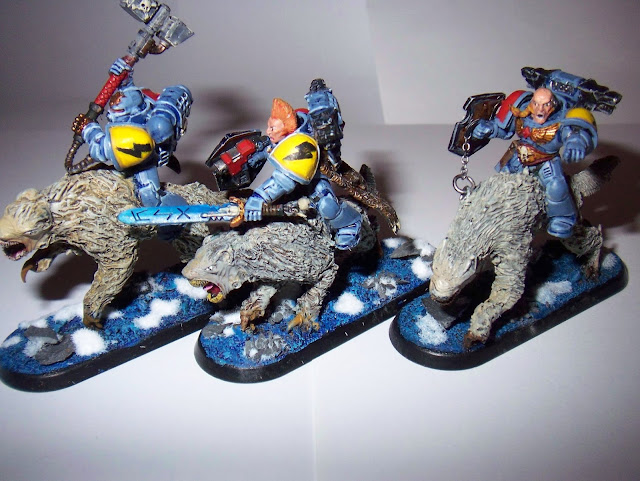 5. What are you working on right now?
X-Wing. And I suppose in theory my list for Double Trouble. I'm really into X-wing for a whole load of reasons, (check out my blog in the near future for a series of articles on why you should be playing the hottest wargame!) and have achieved my modest goals for this tournament season, which was to win a store championship (I actually won 2!). 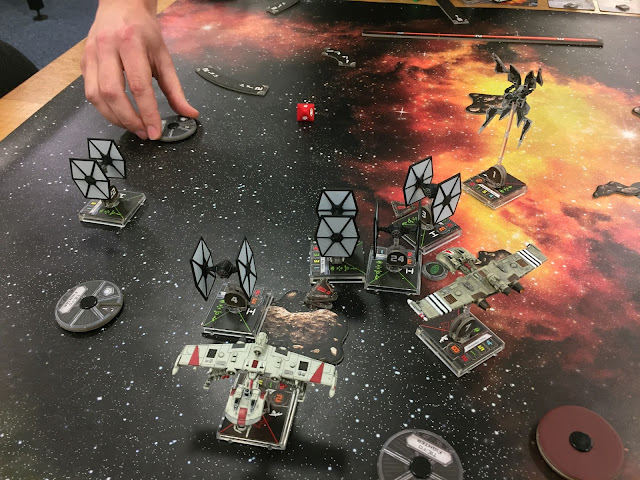 Painting wise, I've just finished repainting one of my latest X-wing ships, the Jumpmaster 5000. Its hopefully pictured here. I do a bit of vlogging as well, and if you want to look at a video repaint of the Jumpmaster you can view the latest vlog here, or go to: http://youtu.be/3YhfEyfniZw
6. When you are not conquering the tabletop, what do you do?
The main things for me are my wife and my faith. My wife is the love of my life, and she helps smooth the rough edges of my personality as best she can. She's constantly making me into a better person. I don't want to hijack Mike's blog and bible bash, but suffice to say my faith and relationship with Jesus is the most important thing in my life. I actually live it out at work as well, because I work for the Church of England. I'm the Support Officer for a multi-million grant scheme in Leicestershire that helps Anglican churches love people (you can check out the webpages here- my name is at the bottom of the page and everything!). Instead of holding onto the money, we're giving it away so that churches can run community projects, foodbanks, youth work projects or projects that support children and families. Thing to help people and show them they matter.
7. What would you say about your blog to someone who has never read it to draw them in?
It's a real pick and mix bag of things, so I'm hopeful that there is something for everybody. This year I've blogged about 40k, X-wing, Monopoly Harry Potter, Blood Bowl, (Necromunda soon!), board games, books (I think) and modelling advice (not the agency kind).

I try to update at least twice a week, and vlog at least once every other week. I'm also hopeful that I'm at least funny in a dry, British, self-deprecating way (is there any other way?-Mike), which hopefully is endearing. I also received one endorsement on one of my vlogs which was "the fact that he has glasses and a British accent gives him an air of authority, at least here in the United States, so you can trust his process".
8. What is your favourite article that you have written?
Wow. Erm, well technically my blog has existed since 2009, so in theory I have a lot to choose from. An old classic from before the 3 year hiatus would be this article on our star wars 40k armies. 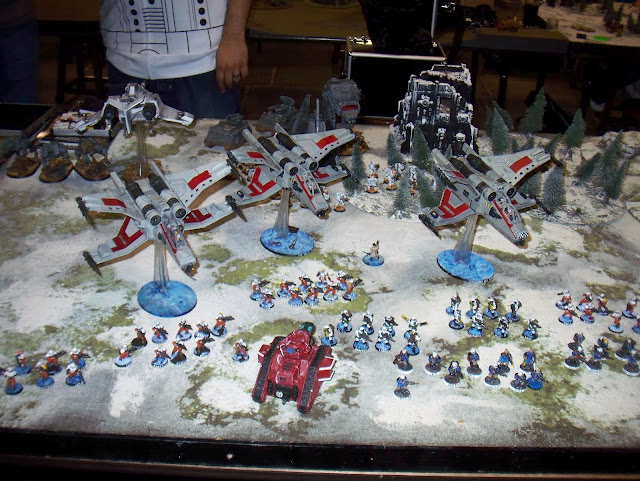 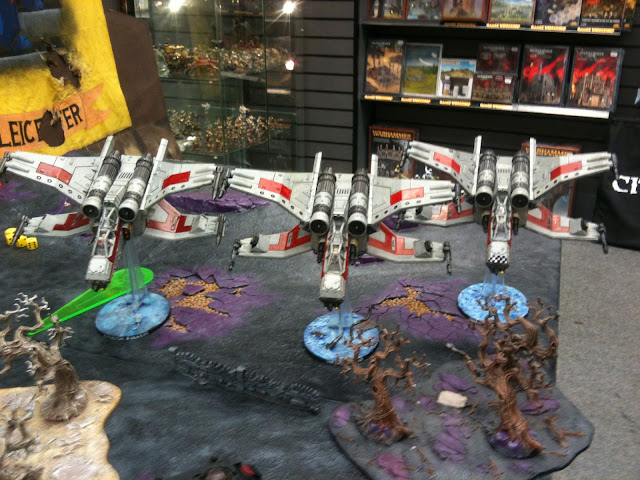 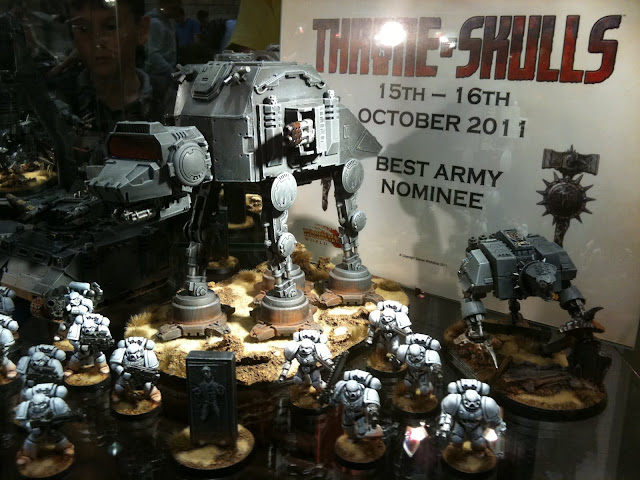 This shows off some of the models that I and friends converted into 40k-scale X-wings, AT-ATs and so on. I still have my ones, maybe I should get them out again! (Definitely! How about trying a game of X-wing on 40k scale?- Mike). If Mike allows me a second, it would be my video review of the final Blog Wars (in which he features!), you can view that here.
9. Which rule would you like to see changed or removed entirely?
From 40k? Superheavies. I hate superheavies and the D arms race that it has created. People say that one or the other is overpowered, truthfully they are as bad as each other. The problem is when they aren't matched against each other. Sure, your 150 Imperial foot army is great, but its going to do sweet nothing against my transcendent C'Tan. And you're all dead. Call me old fashioned, but bring back 4th edition Rhino rushes (note- you really don't have this problem with X-wing, you should play X-wing!).
10. Which of your armies is your favourite?
I love them all, I really couldn't choose! The ones I'm most proud of are probably the Howling Griffons, they are where I've tried to push myself a little on the painting front. 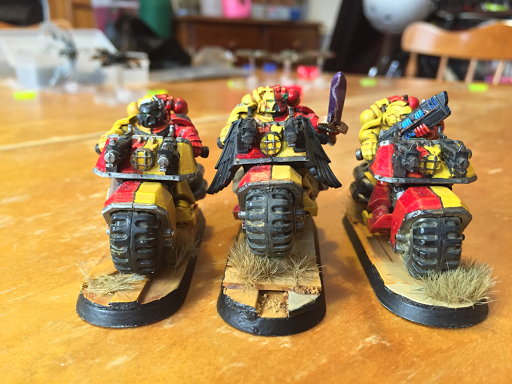 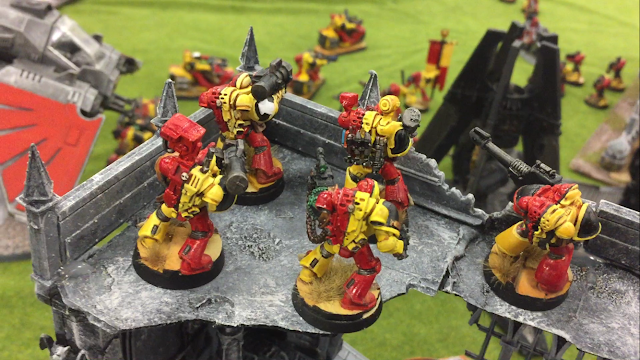 11. Secret wargamer or loud and proud?
Loud and proud. To the point where its kind of "I dare you to not like me because I'm a nerd".
12. Any hobby tips or cheats to share?
Water. Drink at least 1 litre of water per game at a tournament. Your mouth dries out and you dehydrate from talking to your opponent and trying to be a nice guy. Plus, dehydration can cause fatigue, mood swings and headaches. When you're trying to be at your best, you don't want to be at your worst.
13. Tournament or Casual?
I think we've established that its Tournaments for me, lol.
14. Nintendo or Sega?
Nintendo. I don't think I've ever played a Sega...
15. Xbox or PlayStation?
Owned both. Most recently a 360, although I wish I'd had a PS3.
16. McDonalds or Burger King?
McDonalds. Burger King always tastes like horrible McDonalds.
17. Coke or Pepsi?
Pfft. Sorry Rob from 30Kplus40K, but you're wrong. What you can taste is awfulness (totally a real thing). Pepsi is way better. Particularly because when you add Rum, it tastes much better with Pepsi. Mike, on this can we have some stats once you've interviewed like 20-30 of us? (Not a bad idea Luke- Mike).

Thanks to Luke for taking the time to answer my questions.
﻿
Posted by Mike (St Andrews Wargaming) at 09:00