This week's Better Know a Blogger features Ashley from Chickhammer.

I had not come across Ashley's blog before, but had seen her work on twitter (@Chickhammer), when she got in touch to take part in the series.

After checking it out, I will be a regular follower of Chickhammer from now on. You will find a whole host of varied content to suit all your hobby needs; some great photos of painted miniatures, reviews of different games, reviews of Adepticon and much more. Ashley is also taking the plunge into the realm of 30k, starting a Sons of Horus force in 2017. If the pictures on display on the blog are any indication, this is sure to be a great looking army to follow the progress of in the coming year. 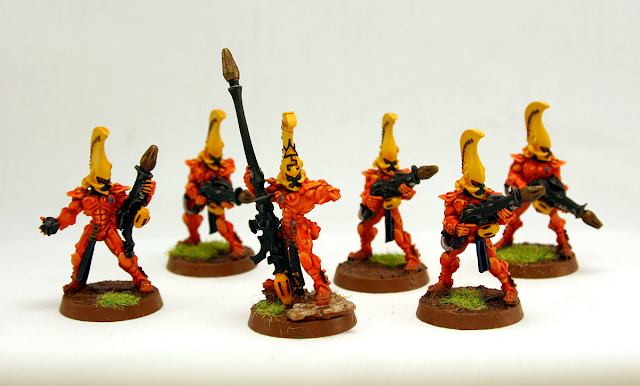 Be sure to check out the awesome Miniatures Gallery on the blog. There is also a section on the blog where you can glimpse the mythical "Finished Armies". These elusive creatures have long been the subject of rumour amongst gamers, but are rarely observed in nature.
In addition to her blog, Ashley is also one of the hosts of the 40k radio podcast. Again, I've not heard this before, but will be checking it out from now on. Podcasts provided some great background entertainment while I am painting and should help me as I go through the many, many models of the Genestealers Cult I have yet to do.


Here are Ashley's answers to my questions:

1. What age did you get into gaming and what started it off?
My best friend spent the better part of our childhood trying to get me to play Warhammer Fantasy, but I didn’t do much gaming until high school. He got me into Magic the Gathering eventually and it spiralled out of control from there: board games, other card games, RPGs, etc. A few years later, clichéd as it is, a boyfriend finally got me into tabletop gaming with 40k. I picked up a Keeper of Secrets and never looked back.

2. What was the first model you ever bought/painted?
My father was really into HO scale trains so when I was a kid, we had a huge train table in our basement. He and I worked on it together. Most of the trains were already painted out of the box, but we did some mods and of course put a lot of time into the table itself. So I’ve been doing the “hobbying” part of the hobby for a long time.

But the first model I ever remember buying and painting was of the Titanic. I was 9 or 10. The painting part was easy, just large blocks of color. I used the Testors enamels, which I don’t miss. But I really remember the rigging. Oh, the rigging. I never got that part right. And never wanted to do another ship after that.

My first gaming miniature was a Chaos Warhound I was using as a Khorne Hound: 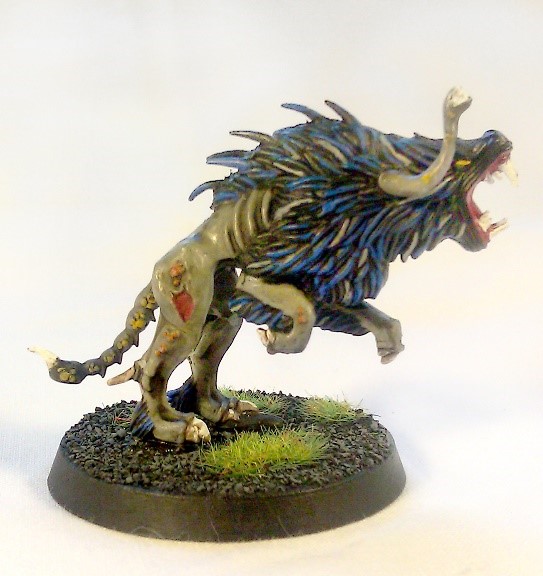 I’m still pretty proud of him, he exceeded the 3-color minimum before I even knew what that was.

3. What is your favourite aspect of gaming?
I am first and foremost a hobbyist. The painting and modelling aspect of gaming is my favorite. It’s what I do with most of my free time. In the last year or so, I’ve started moving away from strictly gaming models and have been dabbling with artistic models- busts and the like- that were designed with simply the pleasure of painting it in mind. I’ve gathered quite the collection and need to get cracking on some of them.

That said, I seriously enjoy campaign game play. For a while, I scratched that itch with Necromunda and Mordheim but with all the campaigns in 40k now, I have no shortage of options. My favorite, though, was a home-brew campaign a friend of mine ran about a year ago. A whole bunch of players participated at our local store and it was a delightful time. 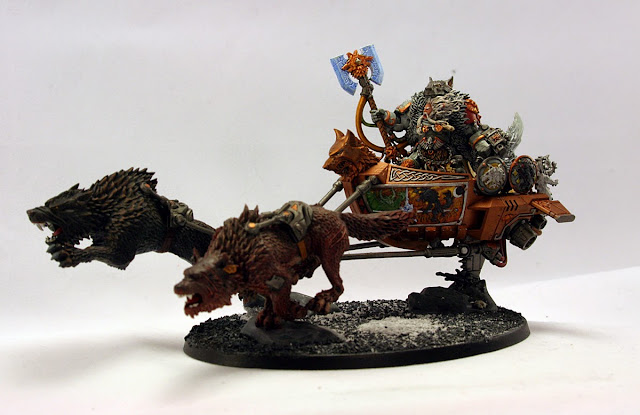 4. Fondest memory in gaming?
The first time a stranger said they liked my model. I was at my first tournament away from home and someone stopped at my display board. He went right to what I was using as a Karanak and said he liked the blending I did on it. I was so excited.

But looking at it now, well, here you are: 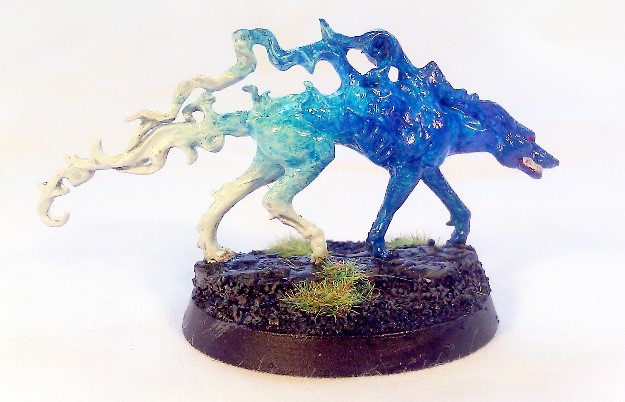 He’s a mess by my current painting standard, but that compliment made my whole weekend.

5. What are you working on right now?
A bit of everything. I’m one of those loons who always has 5-6 projects at once. My main goal for 2017 is to start (and finish) a 30k army. To that end, I working on turning the Betrayal at Calth and Prospero Burns boxes into a Sons of Horus army.

I also have (in various stages of paint) a dwarf bust, a Deathwatch Kill Team, a Tyranid army, Guild crew for Malifaux, and a Treeman ancient that I am using as my companion in a Pathfinder campaign. With any luck, I’ll get most of those projects finished before the year is out.

My biggest and most unexpected project though, is a Forge World Harridan which I just received. It was a gift, and it took me entirely by surprise. It’s easily the largest model I’ve ever worked with (biggest had been an Eldar Revenant Titan I finished in the fall) and I am both really looking forward to and really terrified of working on something that monstrous. 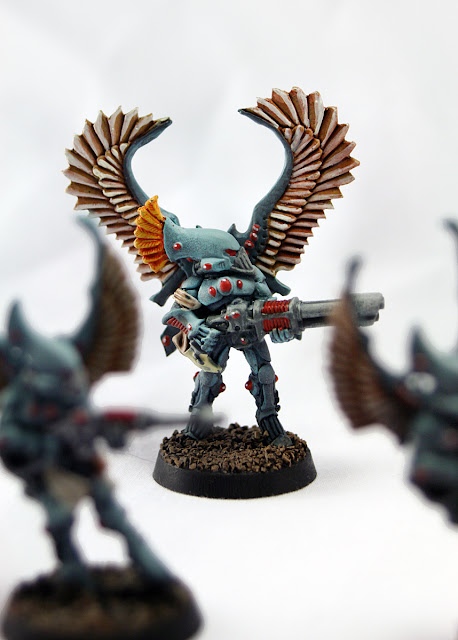 6. When you are not conquering the tabletop, what do you do?
By trade, I’m an accountant. No one but other accountants believes me when I say this, but I love it. It can be stressful at times, but I’m never bored. And as a bonus, it helps buy me all the miniatures I can paint.

My other hobby is podcasting. I’m one of the new hosts of 40k Radio, the 3rd edition as we’ve taken to calling it. We’ve done 10 episodes since we took up the mantle and it’s been an absolute blast. In some ways, it’s just an extension of the hobby because (surprise!) we talk about 40k. But the technical aspects (like recording and editing) and fan interaction are a totally separate thing from gaming that I’ve really enjoyed learning and doing. I know way more about audio recording today than I did a year ago.

7. What is your favourite article that you have written?
My favorite would be one of my earlier ones, and certainly my most controversial. It was an article discussing some of my experiences as a woman in tabletop gaming up to that point. I highlighted both positive and negatives but the response it received was overwhelmingly about the negatives. For a good six months after I published it, I received a shocking number of threats in comments, in my email, on other websites. That was an illuminating experience to say the least.

If I wrote it today, it’d probably be a bit more concise but many of the things I took issue with are still problems I find five years later. But things have certainly been getting friendlier and more welcoming in that time. 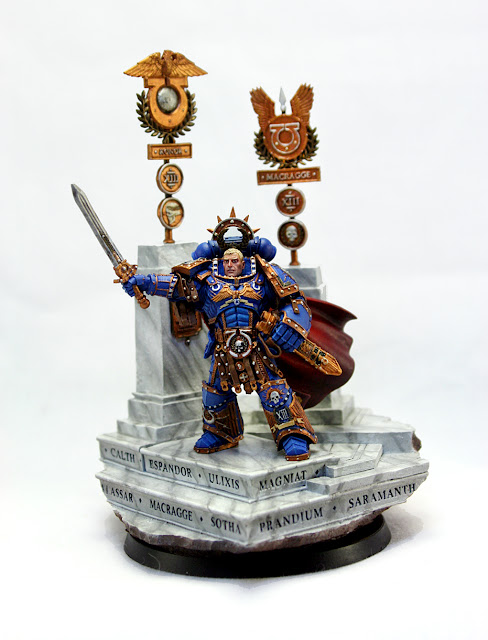 8. Which rule would you like to see changed or removed entirely?
Anything that lets you reroll a 2+ save makes me face-palm.

9. Which of your armies is your favourite?
Of my finished armies, I would have to say my Space Wolves. They were the first full 40k army I finished after I started to know what I was doing. The quality of their paint job is far and away better than my first army (Daemons) and I’ve had a lot more fun playing with them over the years. It also includes one of my favorite conversions, a Runepriest called Alfric Icefang and my Wolf-loyal Freeblade Imperial Knight: 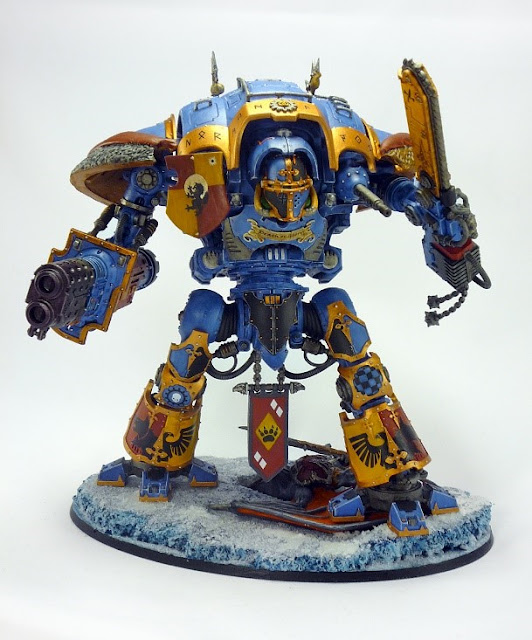 10. Secret wargamer or loud and proud?
LOUD and proud. It’s become a bit of a joke at my office. My boss often asks what “nerd activities” I did over the weekend. The best though, is that I don’t get turned down for time off mid-March because he knows it’s my annual pilgrimage to “Nerd Con” as he calls it. Time off in March is a hard-fought thing as an accountant, our busiest time of the year runs right through Adepticon. 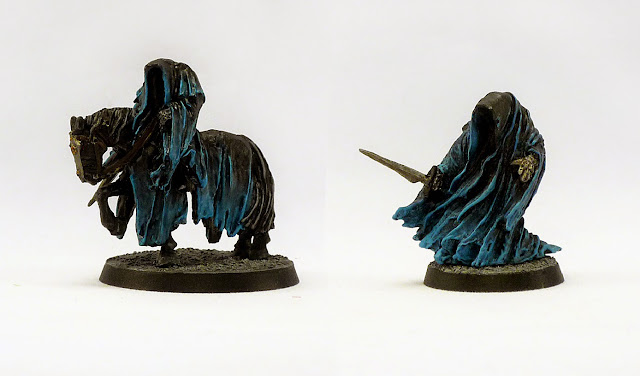 11. Any hobby tips or cheats to share?
I think my painting secret is my Google-fu. I love watching videos and tutorials by other painters. Don’t know how to paint marble? There’s a video for that! What about freehand basics? Blending? Faces? You name it, you can find it out there. They’re incredibly helpful to watch because you never know what you might learn.

The important thing, I think, is not to get hung up on what you do or don’t have the skill for. If you never try something new, you’ll never get better. So try as many new things as you can to push yourself and your skills (great advice. Something I've been trying to do with my own painting recently- Mike). 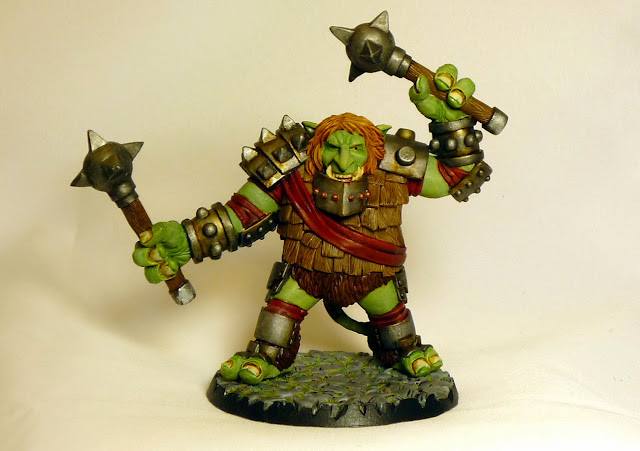 12. Tournament or Casual?
Casual! Tournaments are fun, but can be a gruelling pace. I prefer the lax attitude of a casual game.

13. Xbox or Playstation?
While I own an Xbox, I don’t have a particular loyalty to either. I get really sucked into video games (what do you mean it’s 3am and I’ve been playing for 10 hours straight?) so I don’t play that often, but when I do, it’s on a computer, not a console (I lost a whole summer to Balder's Gate in high school- Mike). 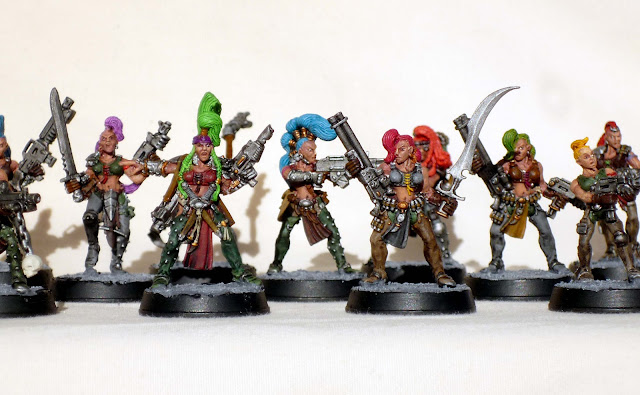 14. McDonalds or Burger King?
McDonalds, I have an affinity for their sweet tea.

15. Coke or Pepsi?
This feels like the most divisive of these questions. But Coke all the way.

Thanks to Ashley for taking the time to answer my questions. Be sure to check out Chickhammer and give Ashley a follow on Twitter (@Chickhammer), plus check out 40k radio for some podcast goodness.

If you have a gaming blog and would like to take part in Better Know a Blogger, drop me an email at corrm83@gmail.com and we can sort it out.
Posted by Mike (St Andrews Wargaming) at 09:00