Fracture of Biel-Tan Review: Part 4- Forces of the Ynnari

Welcome to part 4 of my review of the new Fracture of Biel-Tan supplement. This section will look at the new fraction to join the 40k universe- the Ynnari. 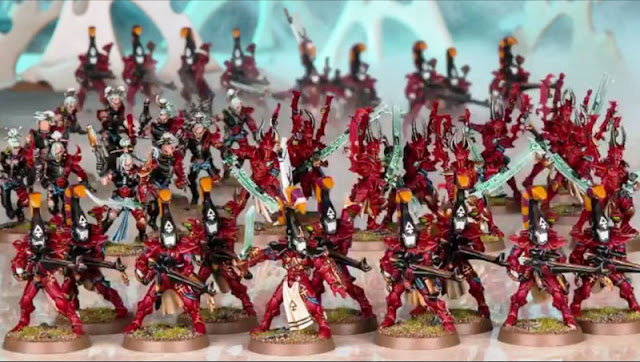 This army features a combined force of Eldar, Dark Eldar and Harlequin units to combine into an Aeldari super-force to use on the table.

Warlord Traits
As is common with many of the 40k supplements recently released, the Ynnari get a new Warlords trait table to roll on if they choose.

Lord of Rebirth- The warlord gets It Will Not Die. Useful for keeping your warlord alive for longer. Added to the wound recovery methods that the new Ynnari special characters get, this could boost their durability even further, helping to keep them alive for longer.

Warden of the Forgotten Wisdom- If your warlord is a psyker, you get to choose your psychic powers rather than rolling for them. This is amazing. Given how powerful the Eldar and Harlequinn psychic powers are, as well as the powers in the various other shared disciplines, removing the random nature of the roll and getting to choose the best powers for the situation is brilliant. Do Eldar have access to Telepathy? If so, you now have Invisibility. This would work really well on a level 3 Farseer, allowing you to choose the best 3 powers from the various disciplines at will.

Walker of the Many Paths- Each turn, your warlord gains a special rule of your choice from Furious Charge, Hit and Run and Move Through Cover. This is pretty awesome too. Hit and Run is an amazing special rule, so getting it guaranteed on your Warlord's unit is going to be very effective in the game.

Master of Death- Any to wound roll of a 6 from your Warlord causes Instant Death. Situational, but could be very effective when used right. Would suit a combat character with a high volume of attacks, or even a psyker with access to a volume of witchfire powers.

Ruthless Commander- Warlord gains a 7" Fearless bubble for Ynnari units. Fearless is a great rule to stop your units running and getting wiped out in assault, so this is a nice bonus too.

Favoured of Ynnead- Warlord and their unit's soulburst range is increased to 14". Given how potent Soulburst actions are likely to be for a large number of units, this is a powerful ability to gain. This will allow you to move, shoot or assault out of sequence at a larger range, making you better suited to deny reprisals from the enemy army with the increased range.

A very nice set of warlord traits. I can see a use for all of them and think they will be of benefit to most warlords. Warden of Forgotten Wisdom seems particularly strong, given how powerful psychic powers are in 7th edition. 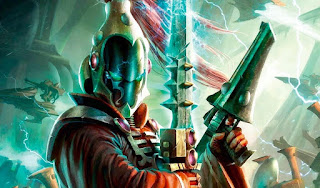 Artifacts of the Ynnari
The Ynnari fraction also gets 6 new Relics to equip your characters with in the army.

Corag Hai's Locket- When locked in combat, the bearer regains a wound on a 4+ for each enemy model they destroy. For the price of a power weapon, this gives you the ability to heal your character for each enemy slain. This would obviously suit a combat character better and could help them stay alive for much longer if they are particularly potent in combat.

Hungering Blade- This is a fleshbane Melee weapon with no AP. In addition, if an Aeldari model (Eldar, Dark Eldar, Harlequin or Ynnari) is killed by the weapon, the wielder regains all lost wounds. A nice bonus, but quite situational. If you are likely to be facing an Aeldari force, it could come in handy, though with no AP, you will most likely be targeting weaker models to try and recover wounds.

The Lost Shroud- Bearer gains Eternal Warrior, Feel No Pain and It Will Not Die, but loses the Independent Character rule (if they had it). For only 35 pts, this is pretty strong considering most Aeldari Characters will only be toughness 3. This is a great way to keep a character alive for longer, but the loss of Independent Character means you are less likely to be able to pass wounds only close friendly models (I assume they are still characters, meaning a 4+ Look Out Sir, rather than a 2+). Might be worth it.

Mirrorgaze- Wearer gets Blind, Counter Attack and Night Vision. Blind can be useful in some situations, giving you the potential to weaken enemy units with your shooting or combat attacks. Counter Attack could also be useful for combat units, getting you the extra attack and any special rules the unit may have. Not sure it is worth the 30 pts price tag.

Song of Yneead- An 18" poisoned 2+ AP 5 weapon. It also gets Bladestorm (roll of 6 to wound, wounds automatically at AP2) and forces a Morale check at the end of phase if a model is killed. For only 10 pts, this could be very useful to give to a character that is not taking another relic. Poisoned gives you a good chance of wounding, with the potential to ignore armour on a 6. Most units aren't going to be overly bothered by this, but it could force a failed morale test every once in a while.

Soulsnare- An assault 1, Blast grenade that is S3 AP2 with Instant Death and one use only. This has the potential to devastate multi-wound models with low toughness or even kill Marines or heavily armoured units. The strength of 3 is low, so your chances of wounding might be slim. For 25 pts, I'm not sure this one is worth it, but could be useful in some situations.

Overall, the Ynnari have some decent Relics available. None stand out to me as "must take" like with the Relics for other armies, but some nice thematic ones that could be of some benefit depending on your army. The Lost Shroud is probably the best. Eldar characters are extremely susceptible to Instant Death thanks to their low toughness, so any chance to gain Eternal Warrior is probably worth it. 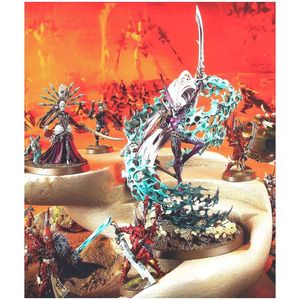 Reborn Warhost Detachment
The book contains the awesome new Reborn Warhost detachment, allowing you to take a combined force of Eldar, Dark Eldar and Harlequin units in the one detachment.

What this means is that all units chosen from the list are in the same Faction, so can use and start the game embarked in transport vehicles purchased from the Fast Attack section of the detachment. This opens up the potential for some fantastic combinations when you see the units that are available.

Command Benefits
The detachment allows for the usual re-roll to your warlord trait when rolling on the Ynnari table. In addition, you get two other benefits.

Our Souls We Entrust- Units in the Detachment gain Stubborn. In addition, a unit from the detachment within 7" of another unit from the detachment do not taken morale tests from 25% or more casualties in the shooting phase. This is a pretty good bonus, given the generally high Leadership of Eldar units. Keeping your units together may not suit your playstyle, but I think the bonus is worth it. 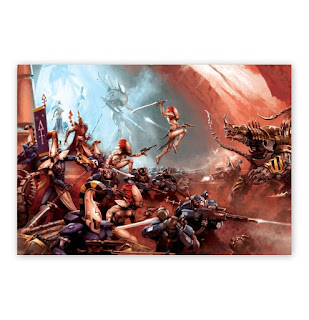 Unit Choices
There are a large number of unit choices that can be drawn from in the new detachment. These include, but are not limited to:

HQ- Any of the new Ynnari special characters, Eldrad Ulthuan, Farseer, Autarch, a number of the Phoenix Lords, Archon, Succubus.

Formations- The Ynnari formations (to be covered in the next part), Windrider Host, Seer Council, Kabalite Raiding Party, Aspect Host.

Pretty much all of the Eldar, Dark Eldar and Harlequinn units and formations are available to be taken in a single army. This is obviously a pretty powerful detachment with a lot of powerful combinations available.

Like Howling Banshees or Striking Scorpions, but are sick of not getting into combat? Stick them in a Raider or Venom and get access to a fast, assault vehicle.
Remember the good old Wraithguard with D-scythes and Archon with Webway Portal in a Deep Striking Raider? Now you can have it again and deep strike your D weapons with pinpoint accuracy.

EDIT (March 2017)- The recent FAQ has made it so that you cannot begin the game in a transport for a different Fraction, even if they both have the Ynnari Fraction. This obviously cuts down a lot of the powerful combinations possible.


The number of combinations, bonuses and stacking special rule options in this formation are quite staggering. One potent combination was recently posted by MRC in the comments section:

"an 'Assassin' combo like this:
-Visarch
-Succubus with WWP, Haywire Grenades, Archite Glaive, and Armor of Misery
-Shadowseer with Mask of Secrets

Use the WWP to Deep Strike with no scatter 1" away from the enemy model/unit that you want to "assassinate," in this case, let's say its a Riptide with two Shielded Missile Drones. The Visarch makes the Riptide/ Drones use the lowest Ld (i.e. Ld 7, from the Drones) and then you subtract -2Ld for the Armor of Misery and -2Ld for the Mask of Secrets, making the Riptide/Drones Ld3. You then either use the "Mirror of Minds" power from the Shadowseer or, if you did not roll that up, use Psychic Shriek (which is guaranteed, as a Primaris power).

If you do nor roll up Mirror of Minds, then at least you can use Psychic Shriek, which with 3D6 gets an average roll of 11. Subtract Ld3 from this and you have automatically inflicted 8 wounds on the Riptide with Ignore Armor and Cover (so only Invuls and FNP, if it has Stimulant Injectors, can protect it).

I think using Psychic Shriek like this can work well on other MCs or even on dangerous enemy units like Wulfen, Grav Centurions, Dreadknights, etc. and remove a lynchpin unit in an enemy army with high reliability. If your "assassin" unit does get charged later in the game, well you have some solid melee capacity between the Succubus and the Visarch. Finally, you can have all of them attached to some Wraithguard, both as a "meatshield" for the ICs and to provide even more damage output, if you need to kill something like a pair of Stormsurges with Shield Generators."

I'm sure many Aeldari players are salivating at the possibilities afforded by this new Detachment.