Hi everyone, welcome to the first part of my review of the new Gathering Storm, Fall of Cadia book. I rushed down to the local GW this morning to get my copy of the new book (as well as some other choice goodies), eager to read the new story and some of the new rules. 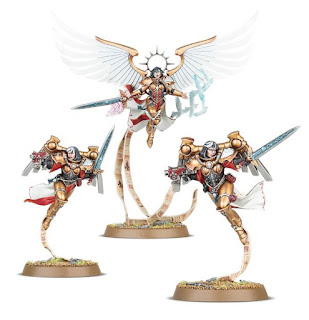 First up, we have Saint Celestine of the Sisters of Battle. Celestine was originally feared lost with the recent release of Imperial Agents, but she is now back and stronger than ever.

Celestine, the Living Saint
Celestine can be taken as a HQ choice in any Army of the Imperium. She costs 200 points, but is well worth the cost. Expect to see her in a lot of armies.

Celestine comes essentially as a character consisting of 3 models. She is accompanied by two Geminae Superior, but they do not prevent her from joining another unit, the Geminae Superior simply join the unit as well. 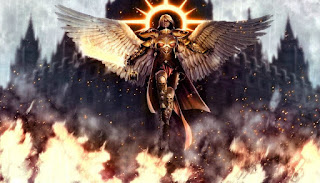 Celestine is insanely durable. She comes with Eternal Warrior (great as she is only toughness 3), 5 wounds, a 2+ armour save and 4+ invulnerable save. On her own, she would be pretty tough. Even though she is only T3 and easy to wound, she does get Eternal Warrior along with a very good armour save and decent invulnerable save. However, she comes with a number of special rules that significantly boost her durability.

Divine Guardians gives each Geminae Superior a 4+ invulnerable save and they have 2 wounds each (though are still only T3). In addition, if at least one Geminae Superior is alive, all wounds suffered by Celestine are resolved against the Geminae. This means that you are going to have to get rid of at least 2 additional wounds (4 if you cannot Instant Death them) before you get to Celestine. On top of that, Healing Tears allow you bring back one dead Geminae Superia at the start of EACH of your turns. Celestine essentially recovers two wounds in her unit each and every turn. You pretty much have a model with 9 wounds that can automatically recover two wounds each turn. That is going to take some amount of firepower to get through, especially if you put her in another unit.

In addition, Celestine also retains her "Get Out of Death free" card. Saint Celestine must take a Leadership test when she is slain. If passed, she returns to the battlefield at the point she was slain in your following turn and can act normally. She also gets to use the Healing Tears rule to bring back another Geminae Superia, so essentially comes back with 7 wounds. She only gets to use this ability once, but it is still incredibly good!

In combat, Celestine is no slouch either. She gets 5 attacks base at initiative 7 and Weapon Skill 7. Her sword allows her to strike at S5 and AP3, and has Armourbane and Master-crafted. She will easily tear through Marines of their equivalent and has a good chance of taking out some vehicles in combat. Her sword also gives her a Heavy Flamer attack in the shooting phase. To boost her even further in combat, she has Hit and Run and is Fearless. Don't forget, the Geminae also get to attack with 3 Power Sword attacks each (though only at S3). Against anything that doesn't have a 2+ armour save, Celestine will do very well in combat.

As jump infantry, the unit can Deep Strike and have a good movement, allowing them to keep up with Bikes or other jump pack units. She also gets Adamantium will, which is a nice boost against psychic attacks.

Once per game she also gets a special shooting attack. This is essentially an orbital Battle Cannon shot that is an assault weapon. It's not always going to do damage, but will be a pretty potent shot if it hits.

Blessing of the Saint
As if all of the above was not enough, Saint Celestine also provides some great buffs to any army that she joins.

At the start of each turn, she gets to use a Saintly Blessing that affects all non-vehicle units from Armies of the Imperium within 12" that are of a certain type, though each blessing can only be used once.

The effects include giving HQ units Zealot, giving Troops a 6+ Feel No Pain (that stacks), giving Heavy Support units Relentless and giving Lords of War, It Will Not Die for the rest of the game! 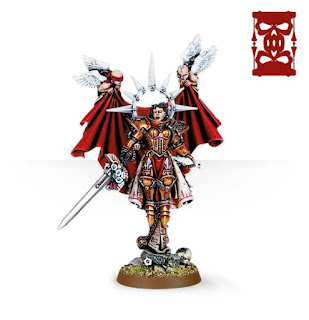 Overall
As you may have seen above, Celestine is an absolute steal for only 200 points. She is a highly durable model that is very good in combat against anything with a 3+ armour save or worse. She also provides any unit she joins with Hit and Run and Fearless. In addition, she provides some great buffs through her blessings for a lot of the army.

On top of that, the new model is really nice. I would expect to see her a lot in a number of tournament armies.

I hope you have enjoyed the first part of my review of the new book. I will be looking at the other characters in the book and their formations later in the week.