Yes, it's back. You've been asking for it, and I have managed to get some more participants to contribute (a big thanks to everyone who got in touch to take part).

This week's Better Know A Blogger features Jimmy from the Eye of Terror. 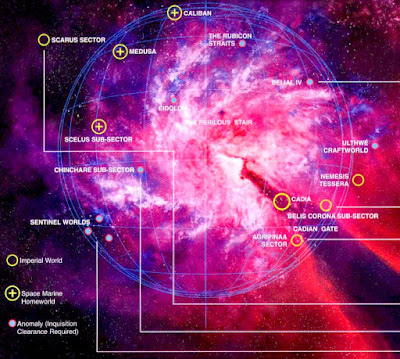 The Eye of Terror is a relatively new blog that was only started in December. However, it has some great content already, as Jimmy discusses issues and pitfalls of starting 40k, as well as showcasing the building of his current Traitor Legions army.

Even though he is just getting started, Jimmy has already given magnetising a go, applying magnets to his Chaos Terminators and Forgefiend. These efforts have been very successful and are a fantastic for someone who is only starting in the hobby. I know it took me about 15 years of 40k to even attempt my first magnetisation of a model!

I asked Jimmy for a bit more information on what is to come for the blog and he said:
"My aim would be to write about getting stuff done. How do you assemble pieces, where to get pieces, how yo learn the rules, how to build terrain like stones/mountains/trees? The latter I hope to start out with in the upcoming weeks, as it's something with my current painting skills can't really screw up, it can be done quite rudimentary?

Codex reviews will be left to the pros I think, as I don't have the time to spend on it. Possibly I will post commentaries limited to my own armies, ideas of future setups, that sort of thing.

Battle reports might become a part at a later stage. I'm not sure whether or not I'll do it, as it might break immersion or game flow?"

I look forward to seeing how the blog grows and progresses over time. Be sure to check out his posts and comment on them, show your support for a fellow blogger starting out.

Here are Jimmy's answers to my questions:

1. What age did you get into gaming and what started it off?
I guess there we have a huge gap with the general audience right off the bat? I played boardgames when I was young, stopped at around puberty, hardly ever played since. I like the way Scythe sounds though, so might pick it up in the near future! Computer-games I've played since I was 6-ish I think, up until a few years ago, around 35-ish years old. I guess you could say it created a void that I'm going to fill with playing Warhammer 40K? :)

2. What was the first model you ever bought/painted?
That would be the... Ooof... The Dark Vengeance starter box. I wanted to check whether or not I'd like building and painting. So I watched a fair share of youtube movies, read up on techniques and color schemes for my Uber Night Lords (in my mind anyway), purchased all sorts of paints and accessories, assembled the chaos marines and Helbrute, just to find out I plain sucked at painting! Base-coating was fine, but I don't have a steady hand and the scale is just too small for me too. I didn't have a local gaming community to my knowledge, whom to ask? So, everything went back into the box and my mind. The idea didn't pass though, so couple years later I decided to just concede and start searching for a commission-painter :) Right after my mind went into overdrive, and I've purchased well over 2500 points (roughly) army in like 2 months time I think, both from the store and 2nd hand, the full list is on my site. In hindsight, I've probably gotten way too much stuff for now, but hey, I'm enthusiastic, hahaha! (keep going with the painting. We all start off rubbish and progress over time!- Mike)

3. What is your favourite aspect of gaming?
I would say stories/campaigns, but again, I have to get my first game in... :P The fluff. I'm a consumer. I got introduced into Warhammer 40K through the books, by a friend. I've devoured hundreds of book and short stories, I love it! I'm by no means a guru, I applaud people that created their own chapters, but for me the tabletop will probably be an extension of the Lore (be sure to check out the Gaunt's Ghosts books, they are fantastic!- Mike).

4. Fondest memory in gaming?
This doesn't apply yet, I still have to get my first game in... :(

5. What are you working on right now?
Currently I'm preparing my 1000 point army for paint. Some are still on sprue, some need to be stripped of the current paintjob, some is assembled and magnetized. I think I'm roughly half-way through. Next to that, I'm working on some articles for the blog and viewing my Watch Later youtube-queue while my girlfriend is pulling some overtime at work, or we watch some episode of various series in queue on Netflix.

6. When you are not conquering the tabletop, what do you do?
I work in the financial sector at an IT department, which is something I've done for almost 20 years. In my spare time I like to have friends around, do some binge-watching, read a (primarily Black Library) book - something I do before bed or when commuting as well.

7. What would you say about your blog to someone who has never read it to draw them in?
"I try to show an almost-40-when-just-starting perspective. Don't be afraid, fair chance I might be a bigger noob than you!"

8. What is your favourite article that you have written?
Seeing as I only just started out, and I have to push myself for "fluffy writing" - I'm the IT guy right, I think in black or white, right or wrong, but I have sentiments too! - so I would say "Where I assembled more stuff, and proud of my terminators-job!" as I am indeed very proud of how those termies came out :) https://eyeofterror.eu/2017/01/where-i-assembled-more-stuff-and-proud-of-my-terminators-job. (As I said above, great job jumping straight into the magnetising- Mike)

9. Which rule would you like to see changed or removed entirely?
The answer would be: Invisibility. It's ridiculous on how it may be applied (ie. unit-limitations). I don't mind about things being made unavailable as a target, but Titans...?! I like the idea BoLS mentions: http://www.belloflostsouls.net/2014/10/40k-rules-invisibility-to-nerf-or-not-to-nerf.html

As that's over 2 years ago, I don't know if anything has changed since though. I don't think so?

10. Which of your armies is your favourite?
Working on my first, which is definitely my favourite! ;-)

11. Secret wargamer or loud and proud?
I'm for sure not ashamed, but I did get some weird looks when I tell about my weekend, hahahaha

12. Any hobby tips or cheats to share?
Wear protective SOMETHING on your thumb when you're using razorsharp blades to clean up parts fresh from the sprue!

14. Nintendo or Sega?
We had neither, but title-wise I'd pick Nintendo.

15. Xbox or Playstation?
PC Gamer, I'd do anything to play with mouse and keyboard!

16. McDonalds or Burger King?
Burgers from BK, milkshake from McDonalds. Once every odd month I think.

Thanks to Jimmy for taking the time to answer my questions. Be sure to check out Eye of Terror and keep up to date on the progress of his Legion.

If you would like to take part in Better Know A Blogger, email me at corrm83@gmail.com. I am also interested in starting up a "Better Know a Reader" article as well. If you are a regular reader and/or commenter on the blog and would like to be known a bit better, email me and we can get you your own set of questions.
Posted by Mike (St Andrews Wargaming) at 09:00