Another week, another host of 8th edition 40k reveals from Games Workshop. Below you will find a summary of some of the information revealed in the past week, and some of my thoughts on what it could mean for the game. I'm not going to go through every release, as I simply don't have too much to say on many of them.

Stratagems
I was excited to see what we would finally get to use those Command Points on, and I wasn't disappointed.

A re-roll of any single dice may not seem like a great bonus, but this could be vital in many situations. How many games have you fluffed a low charge roll or failed to penetrate with that Meltagun? This could be a potentially game winning ability a lot of the times.

Counter-Offensive is also intriguing. Given that charging units will strike first, this could be used to seriously disrupt your opponent's plans if you get to strike with a unit first, hopefully taking out a vicious enemy unit before they get a chance to attack.

Insane Bravery is also a great bonus to use. Weaker units such as Guardsmen or Orks will greatly benefit from this I imagine, as a single turn of significant casualties could decimate the rest of the unit. Allowing you to ignore the effects of Morale could be a great boost and swing the battle in your favour.

I also like that we will apparently be getting army-specific Stratagems and mission-specific stratagems in the game.

Tactical Reserves
It now appears that deep striking or teleporting reserves will arrive without scatter. The units must be placed at least 9" from an enemy unit, but can still assault on the turn they arrive. This is a similar system to Age of Sigmar.

I like the lack of scatter, as it led to frequent confusion and sometimes arguments in competitive games. In 7th edition, many armies could be penalised by deep striking if they did not have access to certain units or wargear that made deep striking much safer or more accurate, such as Drop Pods or Homing Beacons. Perhaps we will see some wargear allowing for closer deep strike, but it puts most armies in the game at a level playing field.

What this does mean is that many units armed with Flamer-type weapons may not be able to shoot on the turn that they arrive, assuming that 8" is the standard for previous weapons that were Template. This will be a big annoying for my Deathwatch, as their Frag Cannons could decimate an enemy unit on the turn that they arrived from deep strike. On the other hand, if the Deathwatch keep a similar "formation" allowing all non-vehicle units to deep strike, no more scatter will be a big boost to my army, allowing me to pinpoint where each unit will arrive and where to strike.

There is a small chance that units could make an assault from deep strike, requiring a 10 or more on 2D6. However, we may see some units with a bonus to charge moves or getting to charge on 3D6. Deep Striking would make such units a formidable force in the army and a big threat to your own army. 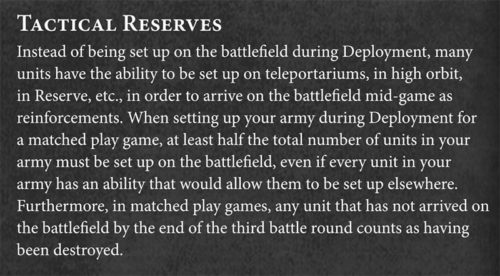 Tactical Reserves was also revealed. Based on this, I am guessing that you no longer roll for reserves to see when they arrive, but get to choose when they will arrive. This is based on the last sentence, where units are destroyed if they do not arrive by turn 3. This seems like a very harsh penalty if you still need to roll for reserves to arrive!
There have also been a number of people complaining that their Drop Pod armies are invalidated by the rule. I imagine that Drop Pods will have a special rule allowing them all to stay in reserve. However, I would not have a problem if they had to deploy half their units on the board at the start. Null deployment has always seemed like a pretty rubbish option allowable in the game. Potentially losing a shooting and assault phase because your opponent doesn't have to deploy anything is a little unfair to me, so I would be glad to see this option go away.

Also, the page made it look like Deathwing Terminator armies could be a thing again!

Vehicles
As has been previously revealed, vehicles are moving to toughness and wounds, and will finally get an armour save.

What was surprising was that non-Walker vehicles also get attacks and get to assault in combat. While they will generally have poor WS values, they will have higher strength attacks, so potentially useful for taking out tougher units or models.

This is also a great boost for assault armies, as your transport vehicle can assault and potentially soak up the overwatch fire of the enemy unit (assuming they can survive it!).

The first is that units can now disembark from a transport vehicle and charge on the same turn. I think that this was a change that many players were hoping for in the next edition of the game. However, units must now disembark before the vehicle moves. This will still force you to get close to your opponent so that you can assault, but will give you some added protection from the vehicle for your softer infantry units.

Another big change is that multiple units can share the same transport. Now, it is not exclusively combat-squad Marine units that can double up in transports. I think that this change was most likely brought about to allow characters to "join" units in their transport vehicle since they can no longer properly join units in the game. This is great, as having to buy a Rhino or Drop Pod just to transport a lone character would have been a bit ridiculous.

I will be interested to see what the different vehicle profiles will be for the different transport units. Will my Ork trukks still be paper-thin (T4 or T5?) and liable to explode all over the place?

Close Combat Weapons
We had already sort of seen the likely profiles for power weapons for the Force Weapons profiles in the Rubric Marines datasheet, but it was nice to get some confirmation. This will make the choice of which power weapon to take much less obvious; do you go for higher strength attacks, or better AP?

The chainsword also gets a bonus attack for anyone wielding it.

According to the 40k facebook group, you no longer get a bonus attack for having a chainsword and bolt pistol, so this is unlikely to give assault marines buckets of attacks. Also, I don't think we will be getting a bonus attack for charging any more, so it looks like an Assault Marine may get 2 attacks in combat (though this is pure speculation from me).

Another nice bonus for Terminators is that you no longer strike last with a Power Fist. Instead you get -1 to hit. Even though you are hitting on a 4+ (with Terminators), doing a S8 hit that does D3 damage will be great for taking out tough enemy units or what were Superheavy Vehicles before they get a chance to strike, or seriously hurting them before they can wipe you out. Terminators are looking better and better in 8th edition.

Expansions
We also got some reveals of some different ways to play the game; Stronghold Assault and Cities of Death.

I have been a big fan of Cityfight games ever since the first expansion was released. This is a really fun way to play 40k and I am glad that it is coming back to the mainstream. Some nice rules reveals here. Infantry getting an extra +1 to their cover save for ruins is great, making it very hard to shift units out of ruins. To balance this, grenades get maximum damage against units in ruins. The humble Frag Grenade is going to be very powerful if it gets an automatic 6 shots and re-rolls to wound when used against targets in ruins!

Stronghold Assault could be interesting. I never really used many buildings in my games and never got a chance to play Planetstrike, so will be interested to see how this pans out.

Overall
So that's just some of the information that has been released so far. Things are starting to look good for 8th edition. Still another 4 weeks to go though till it comes out.
Posted by Mike (St Andrews Wargaming) at 09:00