This week, I will be sharing a battle overview of a game of Age of Sigmar at Newcastle Warlords.

I recently decided to give Age of Sigmar another go. I've been hearing good things about the game since the release of the General's Handbook. Newcastle Warlords are running an Age of Sigmar escalation league, so it is becoming very popular at the club. 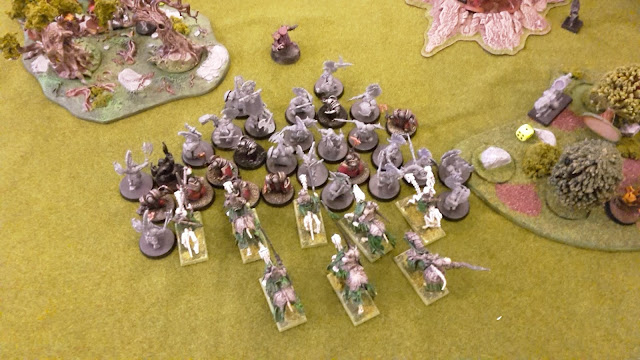 This will not be a full battle report. I was too busy trying to remember the rules and looking up my unit rules to take such detailed notes. This will be more of an overview of the game.

A fairly generic army based on my Vampire Counts army. I really don't know what is good in Age of Sigmar in a Death army. Hordes of Skeletons and Zombies get some really nice buffs in large numbers (bonus to hit and wound or extra attacks), so I took a few units of them. The Necromancer is a good character, able to pass wounds onto nearby units on a 4+. This makes it easier to keep him alive for longer.

The scenario was Escalation. This has three objectives running down the diagonal of the battlefield. You score a point at the end of each turn for each objective held from turn 2 onwards. You score an objective by having more models within 6" than your opponent.

We alternated unit deployment. I set up the large unit of Skeletons and Zombies in the centre, with the Necromancer in the middle. The Crypt Horrors went in front of the Skeletons. I put the second unit of Skeletons on the left flank to hold an objective. The Corpse Cart and Mortis engine went on the right, with the Black Knights on the far right flank.

In reply, Philip put the Dwarves opposite my Black Knights, with a unit of Clanrats opposite the zombies, along with a warpfire thrower. The other Warpfire Thrower and Clanrat went on the left flank, while Drazhoath and the Stormfiends went on the right flank. 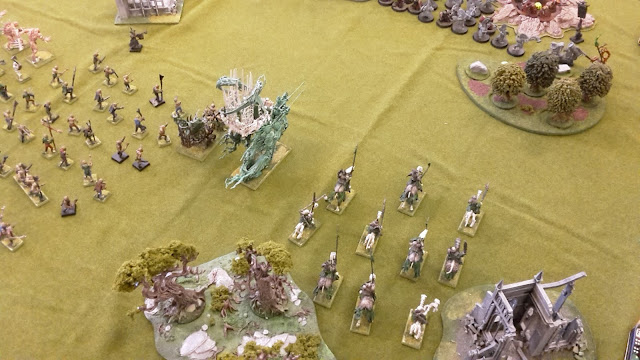 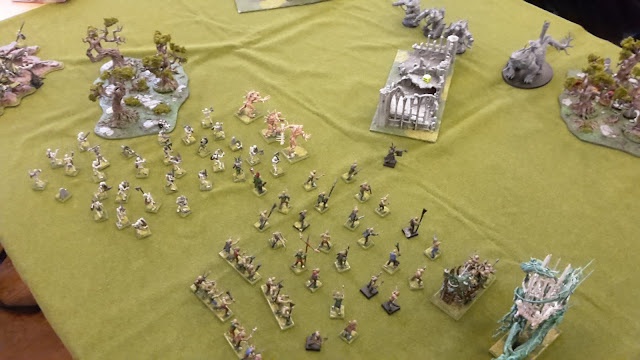 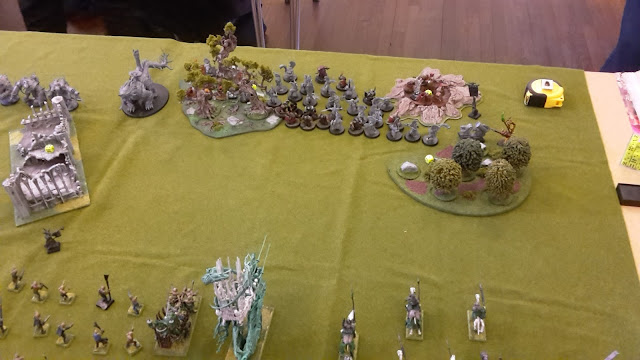 Turn 1
I got the first turn. I advanced with most of the army, only the skeletons holding the objective remained in place. I failed to cast Mystic Shield on the Crypt Horrors. That was it, the Undead don't have much shooting. 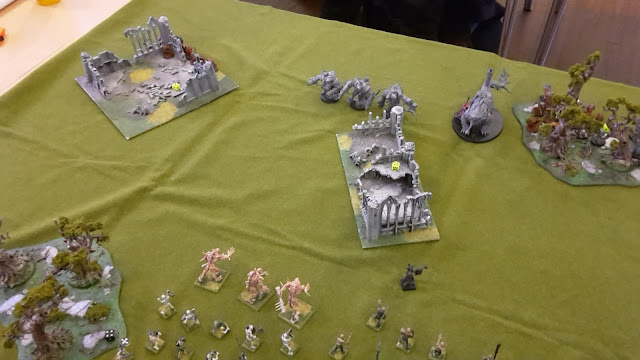 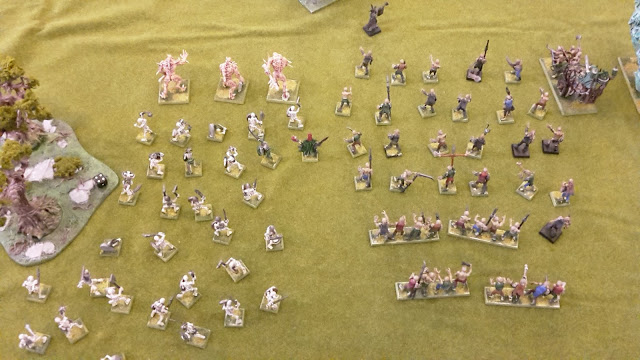 Philip retreated the Chaos Dwarfs, while moving up with the Warlord, Drazhoath and the Stormfiends. The Stormfiends fired at the Crypt Horrors, wounding one of them 3 times. 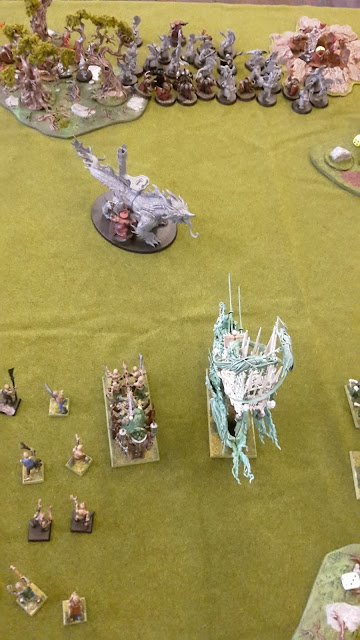 The Skaven Warlord assaulted the Black Knights, killing four of them and retreating from combat. Drazhoath charged the Mortis Engine, taking it down to two wounds and suffering a couple of wounds in reply. 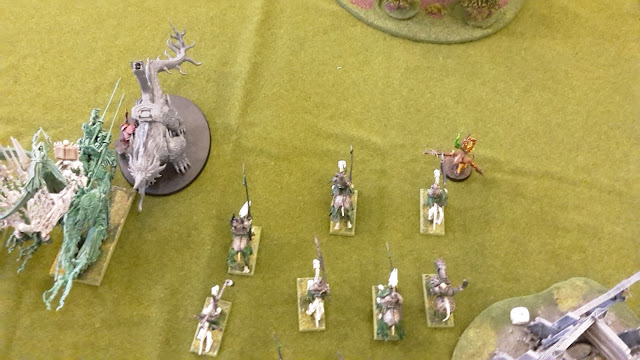 Turn 2
Philip won the initiative roll, so got a double turn. Drazhoath fired an Arcane Bolt at the Mortis Engine, destroying it. The Warpfire Thrower fired at the Corpse Cart, taking it down to a single wound.

In my turn, the Undead continued their advance. The Zombies and Corpse Cart assaulted Drazhoath, killing him in a flurry of attacks. 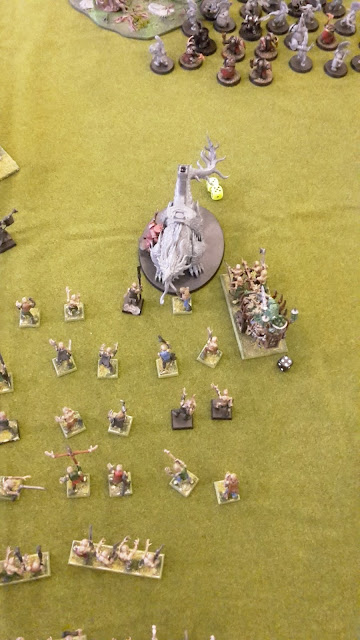 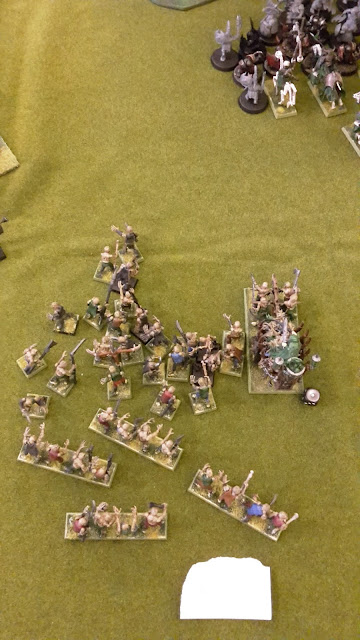 The Skeletons and Crypt Horrors assaulted the Stormfiends. I killed one Stormfiend and lost a few skeletons to their attacks. One more Stormfiend was lost to battleshock. 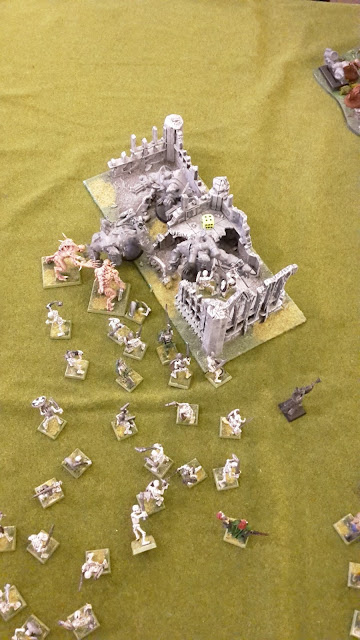 At the end of turn 2, I scored two points and Philip scored one point.

Turn 3
The Skaven Warlord assaulted the Black Knights, wiping them out. My Skeletons killed off the Stormfiends.

I charged the Dwarfs with the Zombies and Corpse Cart. I kill two of the Dwarfs and lost 4 Zombies in the combat. 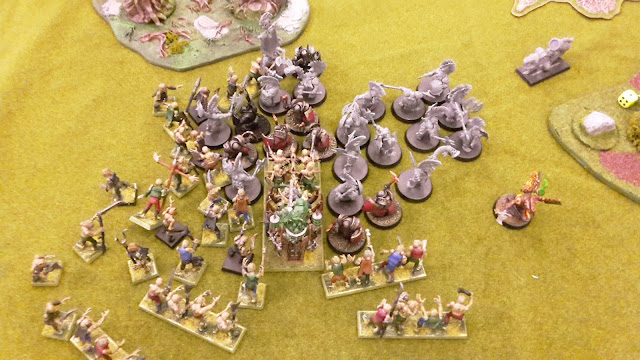 At the end of turn 3, I scored 2 points and Philip scored one point.

Philip decided to call the game there. I had a lot left and he had lost many units.

After-Battle Thoughts
Thanks to Philip for a fun game of Age of Sigmar.

I am still getting used to the game, but it was a lot better than my previous experiences with it. Death are a powerful army. They lack shooting attacks (in general), but get to regenerate models in certain units at the beginning of each Hero phase.

The large mobs of Skeletons and Zombies are great. With sufficiently large units, Zombies are hitting on a 3+ and wounding on a 3+, making them great for killing most units in the game. On the other hand, Skeletons get bonus attacks for having large number of Skeletons. The Corpse cart also provides a nice "to hit" boost for nearby Zombies, meaning I was hitting on a 2+ with their attacks.

The Necromancer did reasonably well. He is able to cast Vanhel's Danse Macabre, allowing a nearby unit to pile in and attack twice. This is a very powerful ability when combined with the large hordes of undead warriors. He also boosts the Skeletons when he is in range of them, allowing them to hit on 3's.

The Mortis Engine didn't really do much. It was taken out before it got a chance to do anything, but I think I will give it another few uses before I can make a decision on it.

The Black Knights were fast, but didn't really achieve much. They really need to be charging in significant numbers to do damage against large blocks of infantry. It might have been better to send them after the clanrats or the warpfire throwers.

I'm going to keep going with Age of Sigmar to see how I like it in bigger games.
Posted by Mike (St Andrews Wargaming) at 09:00