"I felt a great disturbance in the Warp, as if thousand of narrative gamers suddenly cried out in terror, and were suddenly silenced. I fear something terrible has happened."
Just a quick hobby recap this week, as I haven't been able to get much done. I decided to add a command squad to my White Scars army for an upcoming tournament at the end of October. I decided to make the standard super-hard command squad that tournament players love and makes narrative players turn away in disgust.
My command squad will consist of 5 veterans on bikes with an Apothecary, four grav guns and two storm shields (I'm a bad, bad man......)
I purchased some space marine bikers and grav gun equivalents from ebay and managed to scrounge up some storm shields from Dundee Wargames club (thanks to Andrew for providing me with his spare shields!). I already had the Apothecary parts, so assembled and undercoated my command squad. 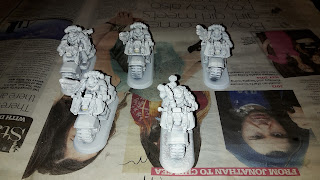 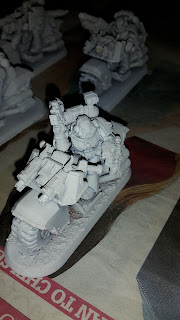 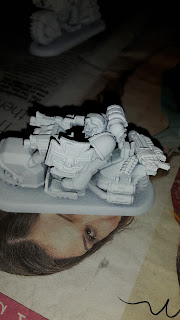 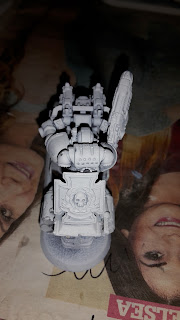 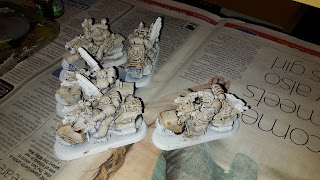 For the grav guns, I used Kromlech's gravity distorters. I have used these for all my White Scars grav guns. They are a bit bigger than standard grav guns, but not too big to look awful. These are a cheaper alternative to grav guns (have you seen how much these go for on ebay?!?). 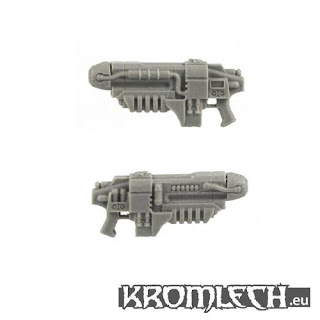 I managed to get the first wash done and a couple of drybrushes of the armour using my standard White Scars paint scheme. I only have a couple of weeks to get these finished, so I will be posting on my progress very soon.
Before the end of the month, I have to get painted:
So, it looks like a busy couple of weeks for me.
Posted by Mike (St Andrews Wargaming) at 09:00