This week I finally got started on magnetising my Dark Talon/Nephilim Jetfighter that I purchased back in August. Having never used the flyers before, I wanted the option of being able to use both variants for a bit of variety.
Having never attempted to magnetise anything before, I put the call out to fellow hobbyists for tips on how to go about this and for any guides that were available. Thanks to Greg, Dave and Alex for giving me advice on how to proceed and for the links to some existing guides:
http://www.bolterandchainsword.com/topic/271107-magnetizing-your-nephilimdark-talon/
http://eternalwargamer.blogspot.co.uk/2014/02/magnetising-nephilim.html
http://indexastartes.blogspot.co.uk/2013/01/magnetising-dark-angels-nephilim-dark.html?m=1
I think I perhaps started with a pretty complex kit as my first attempt, but my mind was made up and I wanted to give it a go.
I purchased a Dremel hobby drill and some 2x1 mm magnets and started to get to work. Once I started, I then realised how fiddly the magnets were. I was having a real problem getting them in to position properly and kept dropping them all the time. I decided I would need to purchase some plastic tweezers if I was going to have any chance of getting it done. My first problem was finding any. I scoured the local craft and hobby stores, but had no luck in finding any. I then purchased a set of plastic tweezers online, but forgot to check the delivery date. After a few days with no tweezers, I checked my order and discovered that the delivery time was anywhere from mid-September to the end of October. Fortunately, they arrived in just a few weeks, hence why it has taken me so long to get started on it.


I looked over the guide for some tips on where and how to magnetise the sections. I am not going to write my own guide to magnetising, the ones listed above were great and deserve a lot of credit for me being able to pull off the job.
A marker pen was essential to mark the side of the magnet that would be glued in place so that I wouldn't glue the wrong end in the hole and end up with the pieces repelling one another. It was still a lot of fiddly work and those wee magnets were a bugger to work with. I swear I lost more than I actually glued on the bloody plane! 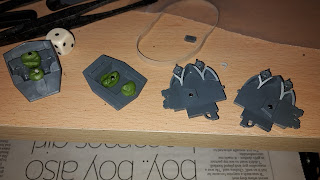 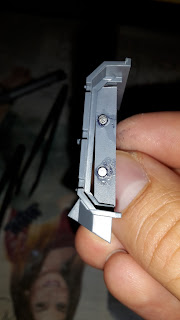 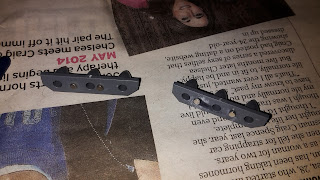 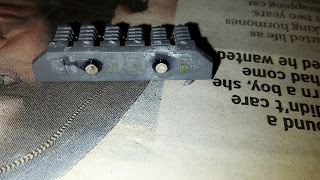 The one issue I had was with the heavy bolters and sensor sections in the front. I found it really difficult to try and fit magnets in the appropriate section in the front of the jet. I finally managed to get the holes drilled out, the magnets stuck in place and the sensors attached. However, once I put the sensors in, I could not get them back out! I had a go with my tweezers and then finally just shaking the whole plane to no avail. I decided I would need to rig up something else to use the heavy bolters.
When looking through my bits box for some sort of support structure, I can across the parts for sponson heavy bolters from a Razorback that I got as part of a model collection on ebay. After fitting them together and making a few trims, I thought they would make a great replacement for the existing ones. I decided to attach them to the undercarriage of the flyer in place of the stasis bomb from the Dark Talon. I was quite pleased with the end result- just goes to show that you should never throw out any old bits. 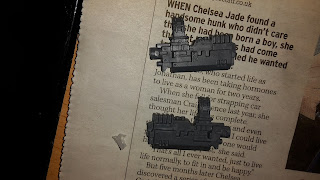 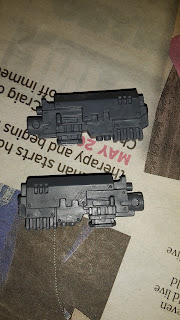 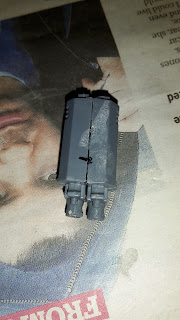 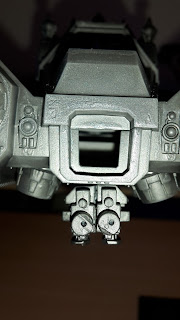 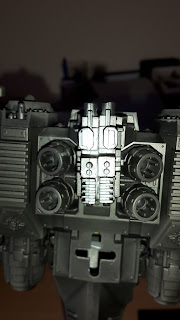 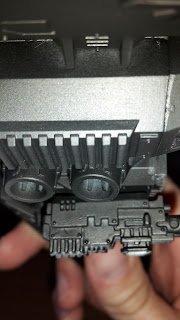 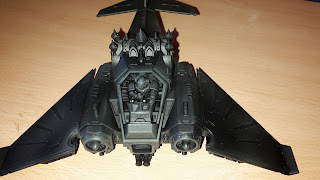 I also managed to get it undercoated at the weekend. I should hopefully be able to get it painted up quite quickly in time for blog wars. I have also added to my White Scars army for an upcoming tournament and need to get them painted up in the next few weeks too- progress on this will be reported at a future date.
﻿
Posted by Mike (St Andrews Wargaming) at 09:00