The maelstrom mission was Cloak and Shadows using Dawn of War deployment.

Sammael was my warlord and took Tenacious Survivor. My Librarian took Aversion and Mind Worm. This game was fought before the release of the new Dark Angels codex.

I haven't faced Magnus before or the Thousand Sons, so this would be an interesting match up for the Ravenwing. 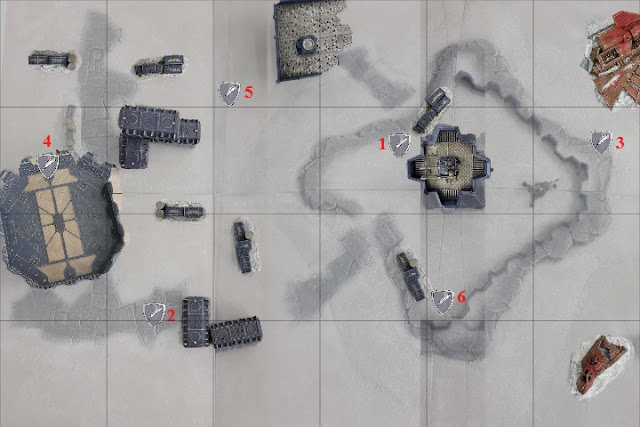 The deployment order was as follows:

I set up the Meltagun Bikers on the left flank and the Flamer Bikers on the right flank, supported by the Dark Talon and four Biker squad. The majority of my force was set up in the centre, ready to go after the enemy army.

Andrew set up the bulk of his army on the left flank. The Horrors and Herald went on the far left, supported by Magnus and the Hellbrute. Ahriman led the Rubric Marines in the centre, while the two Exalted Flamers went on their own on the right flank. 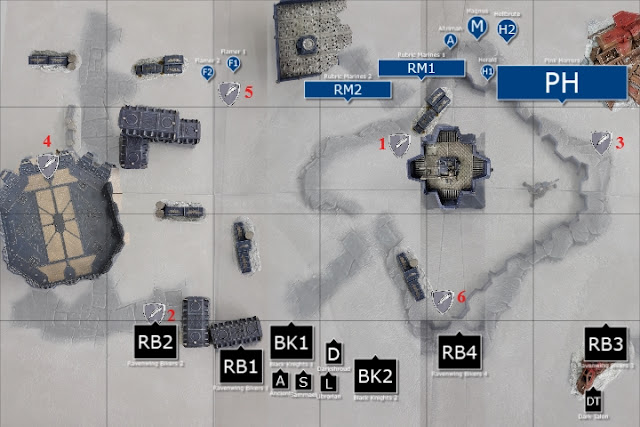 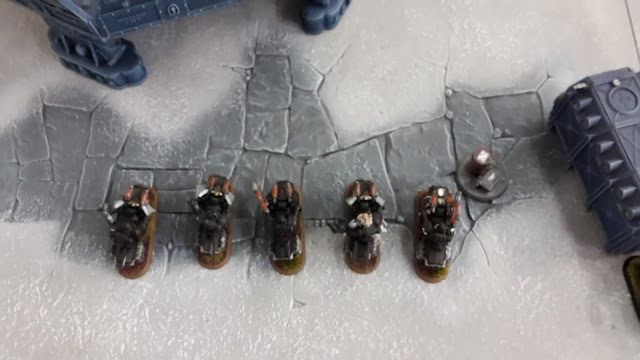 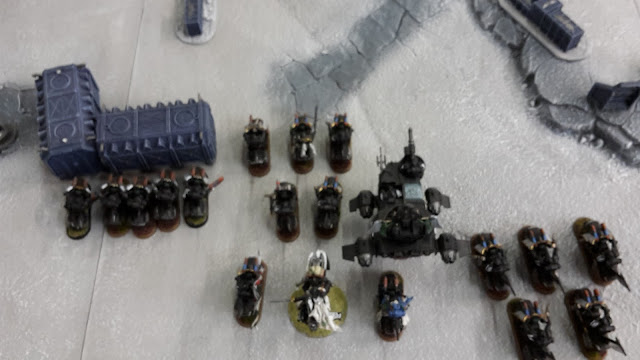 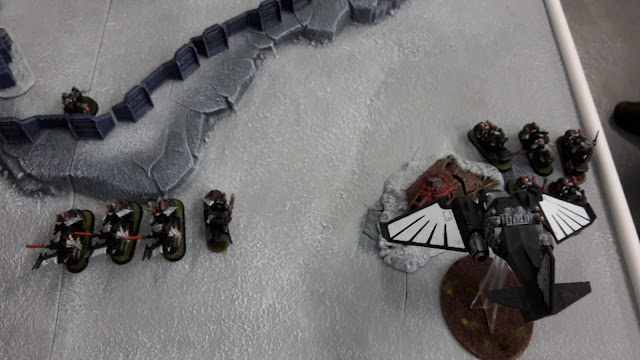 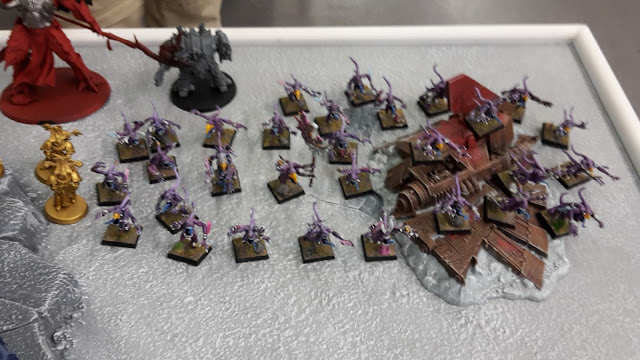 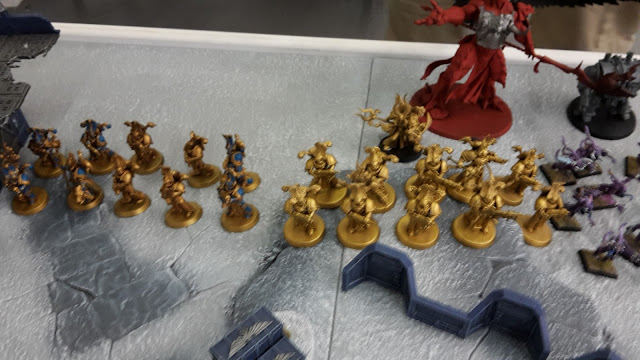 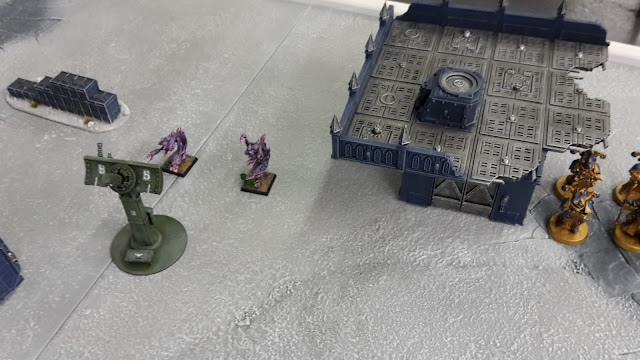 TURN 1- CHAOS SPACE MARINES
As this was Cloak and Shadows, I had no idea what cards Andrew had drawn. 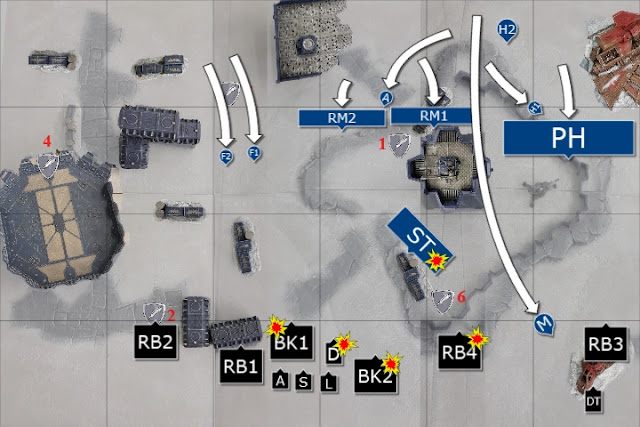 The Daemonic forces supporting the Chaos Space Marines surged forward towards the Ravenwing lines, joined by the Daemon Primarch. The Scarab Terminators arrived from the warp, landing in front of the enemy forces. 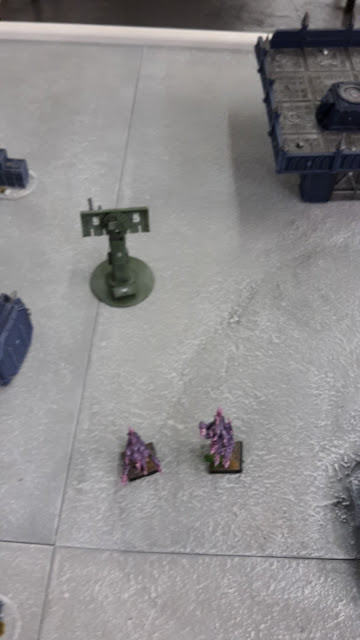 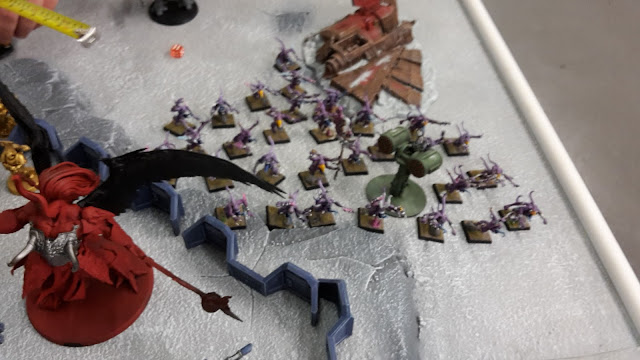 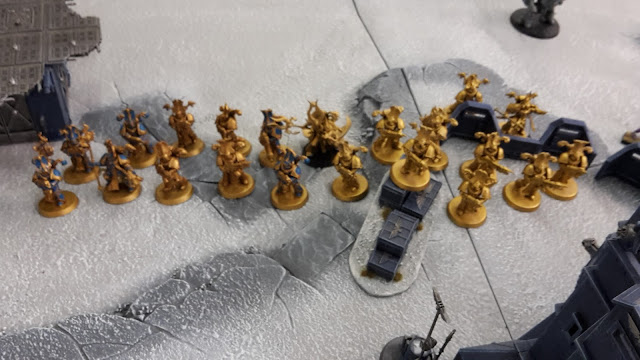 In the psychic phase, the Herald attempted to cast Smite, but failed. The Horrors also failed to cast Smite. The Scarab Terminators cast Smite on the Black Knights, which the Librarian failed to block and one Knight was slain.
Magnus cast Weaver of Fates on himself to give him a 3+ invulnerable save. He then cast Warp Time on himself, moving up on the Dark Talon. He then cast Smite (which Andrew had to use a command point to pass), killing one of the Bikers. 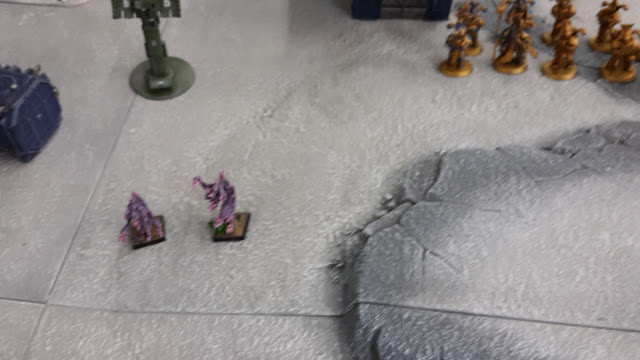 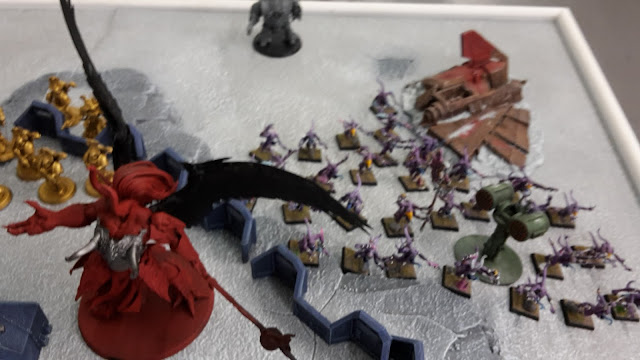 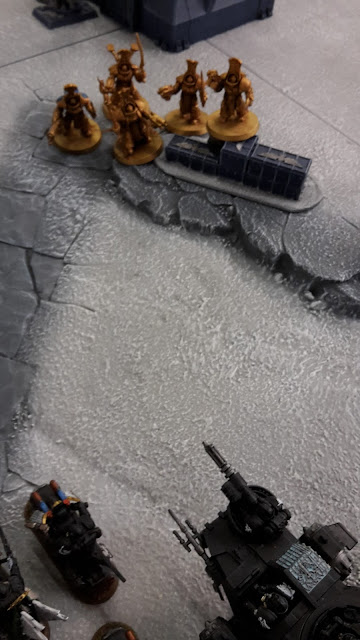 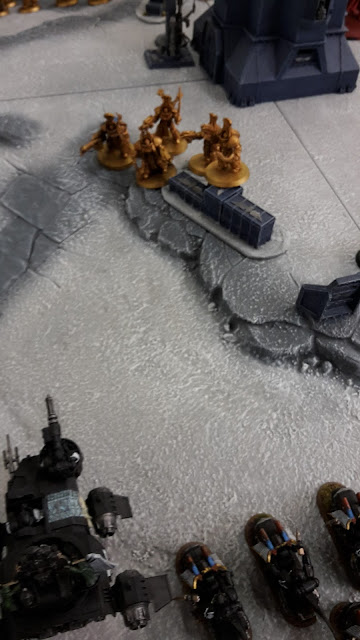 In the shooting phase, the Horrors fired on the Bikers in front of them, but failed to do any damage. The Rubric Marines fired on the Black Knights, hitting twice but failing to wound.

The Terminators fired on the Darkshroud, causing one wound with the Soulreaper Cannon and two with the Bolter shells.

The Hellbrute fired at the Dark Talon, missing with the Lascannon and Missile Launcher shots. The Exalted Flamers fired at the Black Knights, hitting twice, wounding twice and killing one of the Knights.

Magnus then charged the Dark Talon. The Hurricane Bolters managed to do a single wound in overwatch that got past his invulnerable save, but he made his feel no pain save. He then failed the charge on the roll of a 3. He used a command point re-roll and still failed to make it. 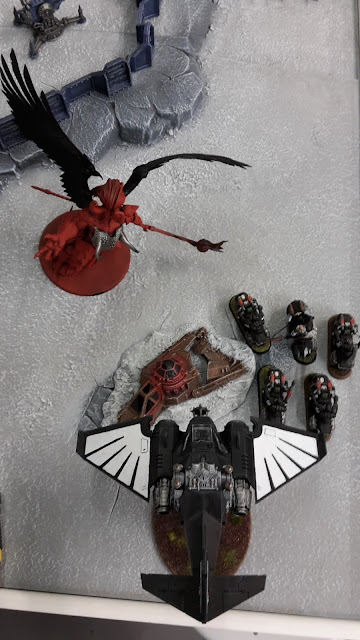 The Terminators charged the Darkshroud. The overwatch fire of the skimmer managed to hit 5 out of 6 times and wounded three times. Andrew failed two saves and failed the charge! At the end of his turn, Andrew scored no points.

That was quite a mild first turn, it could have been a lot worse for me.

TURN 1- RAVENWING
In my first turn, I drew Master the Warp (cast a psychic power), Kingslayer (kill the enemy warlord) and Defend Objective 4. Not a great set of cards. I would be unlikely to get off a psychic power with Magnus so close, and  didn't think I had much hope of killing him. 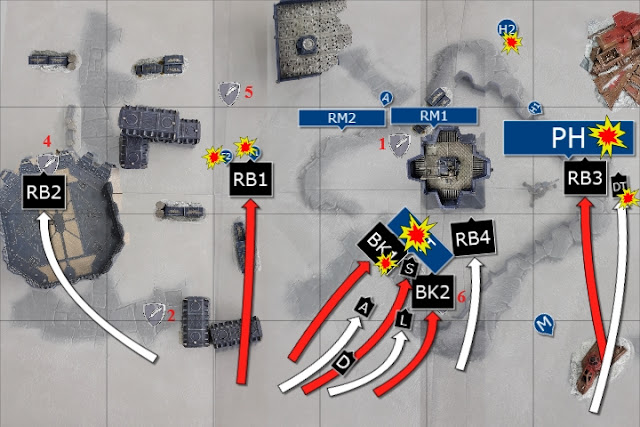 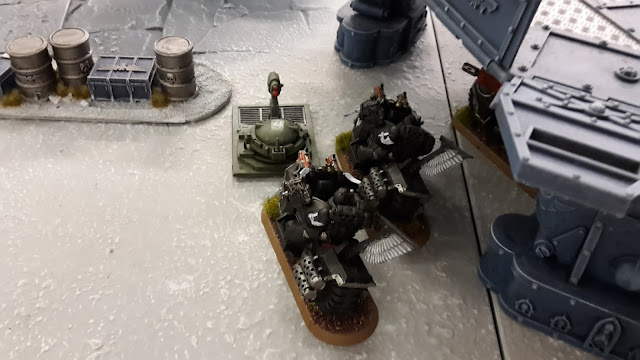 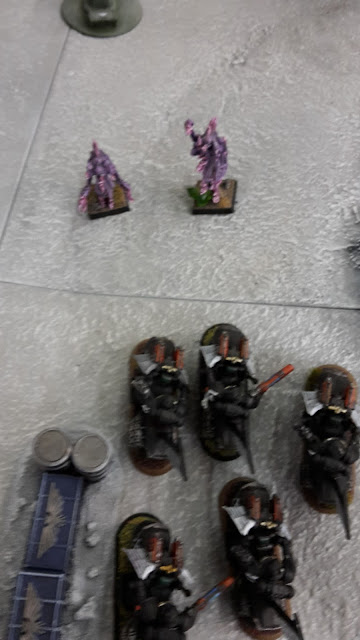 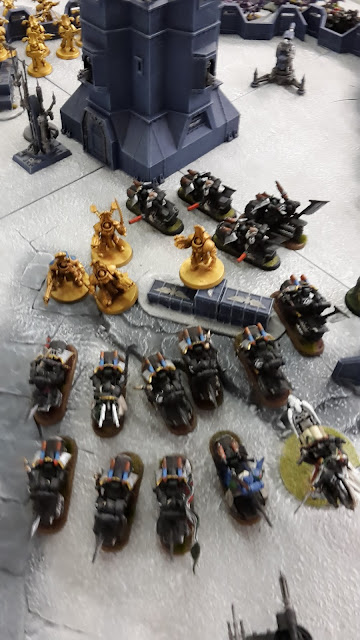 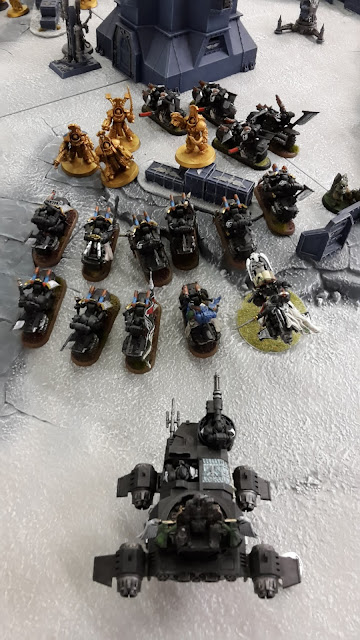 In the psychic phase, the Librarian attempted to cast Aversion on the Terminators. I had to use a command point re-roll, but the power was blocked. I then tried to cast Smite, but Magnus easily blocked it once more.

The Dark Talon fired its Hurricane Bolters at the Horrors, wounding 15 times and killing nine. The Rift Cannon fired at the Hellbrute, wounding it once. Andrew failed his save and the took 6 wounds (including the vortex mortal wounds).

The Darkshroud fired on the Horrors, killing three. The four Bikers added their firepower, wounding three, but failing to get past their save.

The Hellbrute got to fire thanks to a special rule when it took damage. It targeted the Dark Talon. The Lascannon hit, but failed to wound, even though Andrew used a command point re-roll. The Missile Launcher managed to do a single wound on the flyer. 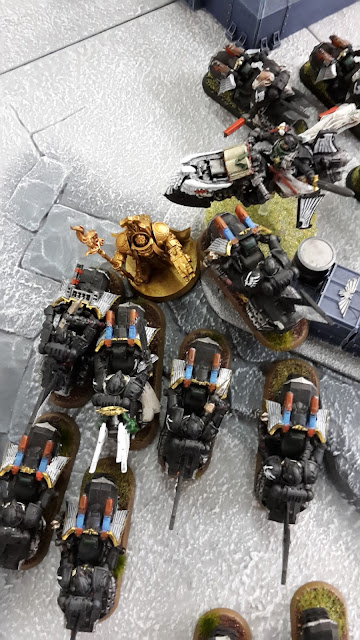 Sammael struck at the Terminators, killing the squad. The Bikers attacked the Exalted Flamer and killed it. 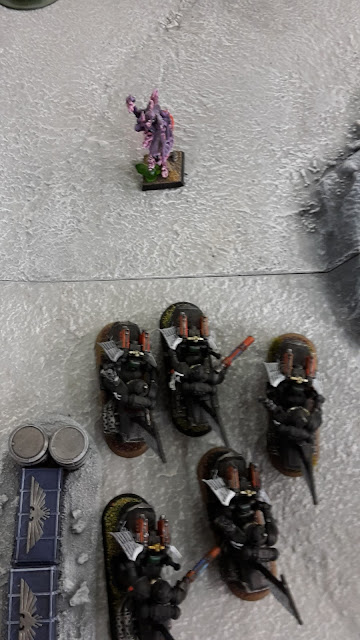 On the right flank, the Bikers killed one of the Horrors. The Horrors struck at the Bikers, wounding them once, but their armour saved them from harm. 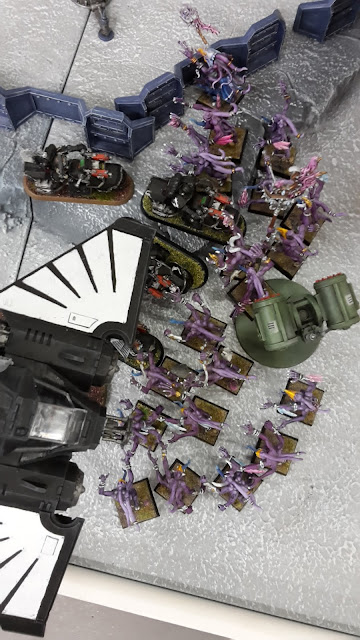 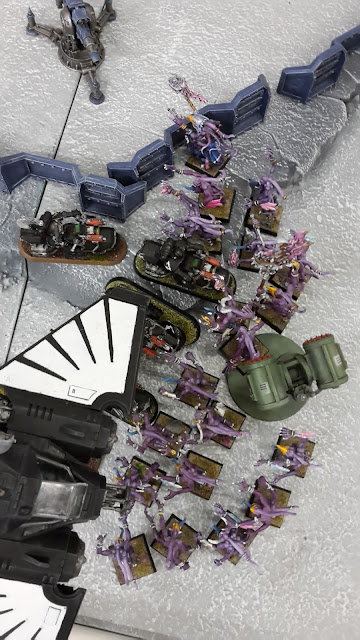 In the morale phase, Andrew rolled a 1 for his morale on the Horrors. Instead of wiping out the unit, 5 Horrors were brought back!

At the end of my turn, I scored First Blood and discarded Harness the Warp. 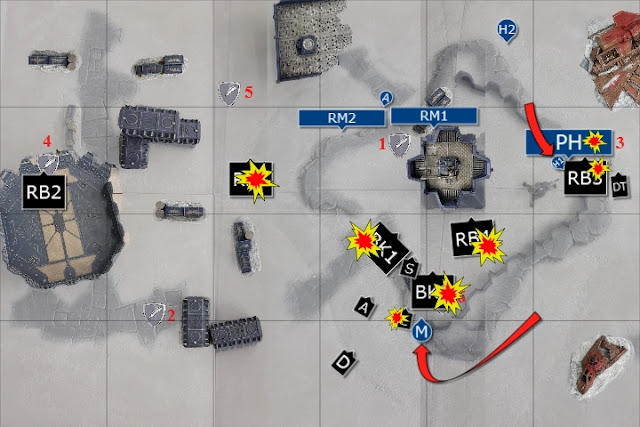 Magnus moved up on the Black Knights and Ravenwing characters, while the Rubric Marines moved up to support them. 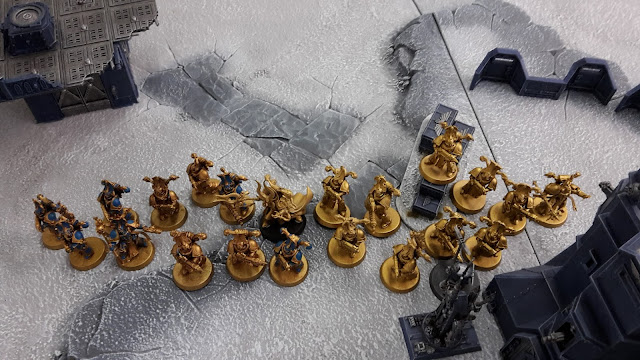 Magnus then used his psychics powers. He cast Master of Fate to give himself a 3+ invulnerable save. He then cast Death Hex on Sammael, but failed to cast it. He then cast Smite, doing 2D6 mortal wound and wiping out a unit of Black Knights. At the end of the psychic phase that was 18 mortal wounds in a single turn.

In the shooting phase, the Hellbrute fired at the Dark Talon, doing two wounds with the Lascannon. 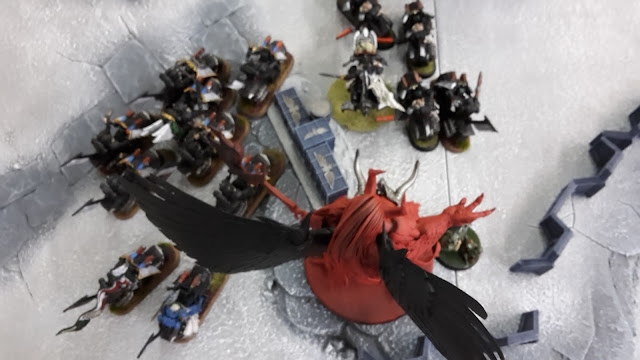 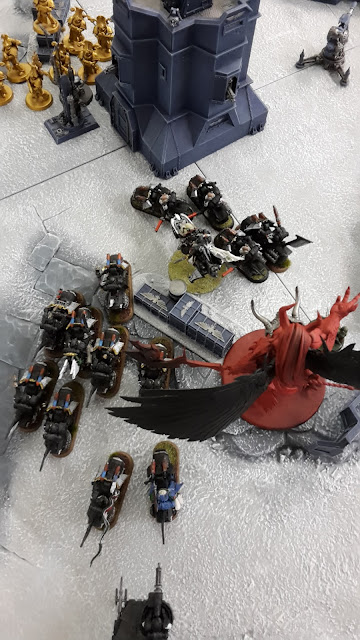 In the charge phase, Magnus charged the Darkshroud and Librarian, failing to get to the Darkshroud, even with a command point re-roll. He easily killed the Librarian and consolidated into the Ancient.

In the morale phase, the last Plasma Gun Biker fled the field. At the end of his turn, he scored Assassinate.

I decided to call the game there. One more turn of Smite spam would easily wipe out the rest of my army and there seemed to be little point in playing on.


AFTER-BATTLE THOUGHTS
They really need to do something about Smite spam in 40k. It does not make for a fun game at all. Eighteen mortal wounds in a single turn was enough to be able to wipe out two of my six 5-man Bike units. Losing a third of your army in a single psychic phase is a hard blow to come back from. I am hoping that the beta rules changes to Smite will improve matters, but need to test them out to see if that is the case.

The game started off well, as Andrew did little damage in his first turn. I was able to move up and take out the Terminators and two Exalted Flamers. The Horrors should have died to morale, but thanks to their special rule, they gained models back! Had I taken out the Horrors, Terminators and Flamers, I think I would have been in a much better position.

The Rubric Marines were a tougher proposition. Thanks to their special rules they get a great save against my Plasma weapons and Bolters, making them very hard to kill and their Bolters could do a lot of damage to my bike units when they wounded.

It might have been worth playing on to see how I got on and learn from it, but honestly, I wasn't having much fun in the game, so preferred to give up there and get another game in.

Sorry it was a bit of a lacklustre battle report this week, but that is sometimes the way it goes.
Posted by Mike (St Andrews Wargaming) at 09:00