Chapter Approved 2017 was released this weekend, bringing new Relics and Stratagems to many armies in the game, several of which I own. It also expanded the rules on various game modes, such as Apocalypse and Planetstrike. 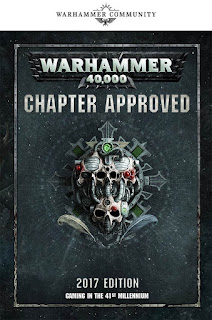 Part 1 of my review will take a look at the new rules for my two most recent armies; Deathwatch and Genestealer Cults. 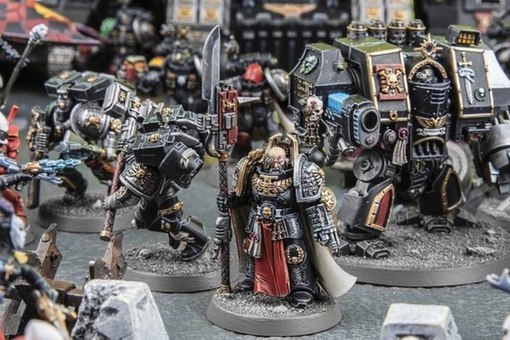 Deathwatch Faction Rules
Warlord Trait
A Deathwatch Character can take the Bane of Monstrosities warlord trait, giving him re-rolls to wound when attacking Vehicles or Monsters. This could be useful on a Watch Master. His re-rolls to hit means he will probably be hitting with all four of his attacks. At S5, he is going to be wounding on a 5+ against most vehicles and monsters, so this could help him gain an extra wound or two if you are rolling well. With D3 wounds with the Guardian Spear, this could be useful for taking a few wounds off any enemy vehicle or monster.
Not great for me. I would probably stick with the +1 attack warlord trait or the 6+ FNP one, as I tend to send my Watch Master after infantry targets most of the time.

Relic
The Beacon Angelis is a new Relic for the Deathwatch that performs a similar function to the 7th edition Relic of the same name. Once per game at the end of a movement phase, you can teleport an Infantry unit or Biker unit that is on the battlefield or in reserve. The unit is removed from the table and placed within 6" of the bearer and at least 9" from an enemy unit.
This is not too bad. Could be useful for allowing a unit to escape from combat or to quickly re-deploy to get into optimal position for firing. Seeing as this costs no points, there is no harm in taking it, so could be useful in games.

Stratagems
The Deathwatch gain two new Stratagems; Clavis and Death to the Alien!

Death to the Alien! also costs 1 command point. In the fight phase, select a Deathwatch unit before they attack. On a 6+ to hit, they get to make an extra attack with the same weapon against units that don't have the Imperium, Chaos or Unaligned keywords. Given that Deathwatch are likely to be fielded in small, elite units, I don't see this being of great use, but will be helpful every once in a while to gain a few extra attacks. Would be useful on units such as Vanguard Veterans or Deathwatch Veterans equipped with close combat weapons. Given they have 2 attacks base, the odds of getting it off are slightly better than with regular Marines.

Overall
I'm a little disappointed with the new rules for the Deathwatch. As I have said before, I think the Deathwatch need big help in 8th edition, as they die far too easily for such an elite army. The new rules are nice, but I don't think they will have a big impact on how the Deathwatch play on the table. I would still probably save my command points for dice re-rolls rather than using the Stratagems most of the time. 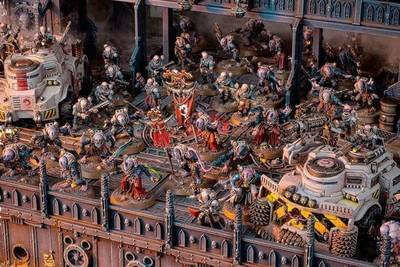 Genestealer Cult Faction Rules
Warlord Trait
The Genestealer Cult Warlord can use the Focus of Adoration Warlord Trait. This allows any friendly Genestealer Cults infantry unit to make a heroic intervention within 6" of the warlord, even if they are not a character. This is an awesome warlord trait, allowing you to reinforce your warlord if they get charged in your opponent's turn. This gives you more attacks against the enemy unit and can also allow you to move a unit into range to use the Unquestioning Loyalty ability to pass wounds from your warlord onto nearby units. This can help sway a fight in your favour or help keep your warlord alive for longer in combat. A great warlord trait that I can see myself using often.

Relic
An Acolyte Iconward can take the Icon of the Cult Ascendant. This gives all Genestealer Cult Infantry within 6" +1 strength. This relic combined with the Iconward's abilities will give all infantry models within 6" a 6+ FNP, +1 strength and the ability to re-roll failed morale tests.
The strength bonus will be great for a range of Genestealer Cult units. It will take Acolytes, Metamorphs and Purestrain Genestealers up to S5, allowing them to wound most standard infantry on a 3+. This is great for causing even more damage. It will also bring the Patriarch up to S7, making it better at taking on vehicles in combat. This is a great Relic for the cult and I can see me using it often.

Stratagems
The Cult gains the Return to the Shadows and Meticulous Uprising Stratagems, giving them some rules similar to what they could do in the 7th edition codex.

Return to the Shadows costs 1 command point. It allows you to remove a Genestealer Cult Infantry unit from the board (as long as they are at least 6" from the enemy) and re-deploy them using the cult ambush rule in your following turn. This is great for re-deploying a unit that finds itself out of position for for getting the chance to charge an enemy unit or shoot them at close range in the following turn. This is a great stratagem that adds some of the 7th edition flavour back to the Cult.

Meticulous Uprising costs 1 command point. It allows you to roll an extra D6 when rolling on the Cult Ambush table to determine how a single unit deploys. Given the power of the Cult Ambush table, this is a great stratagem for getting your unit how it needs to deploy, giving you a good change of getting a charge off on an enemy unit. You could even use another command point to re-roll one of the results on a key unit, giving you essentially three rolls on the table (or four with a Primus in use). Another great stratagem that makes the Cult even more effective.

Overall
I feel like the new Genestealer Cult rules are fantastic, everything the Deathwatch are not. They provide some great bonuses to the army. Given the cheap units in the Cult and how easy it is to fill a Brigade, you can potentially have a lot of command points to play with in your game, allowing you to use the new Stratagems to full effect and get those key ambush units into position. I look forward to using these new rules with my Cult in the near future.