Games Workshop posted the latest round of first draft FAQs a couple of days ago, this time dealing with various Space Marine rules queries. I had a look through them and there are some interesting rulings that are going to have some impact on my Dark Angels and White Scars armies and I thought I would take a look at these. 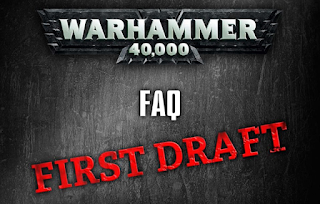 This ruling means that my White Scars Command squad could now take 5 grav guns and 5 storm shields. This would make the unit even more powerful, but even more expensive. I would probably take at least a Storm Shield on the Apothecary, as I often use him in challenges to protect Khan or the Librarian and it would help when he is targeted by sniper fire or barrage.

EDIT- This has now been amended as the answer should have been "No". So no upgrading the Apothecary for me.

I always thought this was dodgy rules lawyering anyway and never denied an opponent a save from my grav weapons, so glad there is a ruling on this now.

This could be useful with the new Technomancy powers, as it allows you to give a vehicle the Power of the Machine Spirit. My Vindicator could now move up and fire its ordnance weapon.

I think there was some confusing regarding the last ruling with Chapter Relics and how many a model could take. This one seems a lot clearer, that only a single Chapter Relic is allowed per model.

This now allows independent characters to join the formation, but tempers this by removing the special rules. Note, this will prevent a unit of Devastators from being Relentless the turn they arrived if joined by a character (unless the character confers it to them himself).

I put these two together as they deal with the same issue- the death of Super Friends! Super Friends is the internet name for putting multiple character from different Space Marine armies together and stacking the special rules. This came from the fact that Space Wolves, Blood Angels and Dark Angels (and a few other chapters) did not technically have the Chapter Tactics rules, so their special rules would stack with the unit from Codex Space Marines to give powerful Deathstars. I imagine quite a few tournament lists will be modified based on this ruling.

The next few rules will be specifically for the White Scars from the Kauyon supplement.

The first ruling is a nice bonus, but I usually take Khan in the Hunting Force, so I don't think it will have too much effect for me.
The second ruling is more important. I had normally been playing the rule this way, but it is nice to have some back up for my interpretation. There was some concern that the ruling would not go this way after the last set of FAQs that did not allow characters to rules such as Preferred enemy to mixed target units.

This query hadn't come up yet in any of my games, as I don't think I've ever charged with Khan as part of the Hunting Force yet. I would probably take the guaranteed two Hammer of Wrath hits with Khan, rather than risk the chance of getting 3 or 1.

Some interesting changes there that will have some impact on my White Scars army. The ability to give the Apothecary special weapons and wargear is useful, I may try to squeeze the additional points to give him a Storm Shield in my Caledonian Revolution list.

I have to say again that I am loving the new direction of GW at the moment. A year ago, we never would have dreamed of getting FAQs for so many of our armies so quickly, never mind GW actually looking for input and clarification for their rulings. I for one have to applaud them for such a drastic change in attitude, I hope it long continues.
﻿
Posted by Mike (St Andrews Wargaming) at 09:00