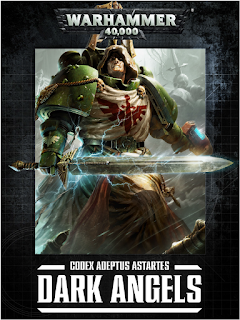 ELITES
The Deathwing units in the elite section have been previously covered in the Deathwing review.
Company Veterans:
These veterans have exactly the same cost and options as the previous codex (with the additional option of grav weapons). They can get two special weapons in a 10-man squad and every member has the option of taking meltabombs. They can also swap the bolter for a chainsword, giving them a good number of attacks on the charge.
In a vacuum, the veterans are a decent unit. They can take two special weapons and each veteran can take a combi-weapon. With the addition of a drop pod, they can be an effective alpha strike unit.
However, Sternguard and Vanguard veterans are a superior choice. The Sternguard get access to special issue ammunition and the Vanguard can be equipped with jump packs and cheap power weapons, making them a more viable assault force. Company veterans are a decent choice, but there are more effective units on the codex for any role you may want to use them for.
In addition, the next choice on the list renders this unit obsolete.


Command Squad:
Ten points cheaper than in the previous codex, the command squad are essentially company veterans with more options. The upgrades (apothecary and champion) cost the same as before and are decent choices. The champion had the Honour or Death rule, meaning he has to issue and accept challenges. The big difference between them and the veterans is that any model can take a special weapon. If you really wanted to (and had the points to spare) you could load the unit up with meltaguns or grav guns, pop them in a drop pod and have a very powerful alpha strike unit (although any Veteran can take a combi-weapon, so could be use in a similar one use only role). Unlike their Codex Marine counterparts, you cannot load this unit up with grav guns and put them on a bike for optimal effect. The closest equivalent would be the Ravenwing command squad, and they cannot take special weapons, so if you were going for a special weapon alpha strike, the command squad with a drop pod would be the most effective way to do this.
As the special weapons do not replace the bolt pistol or chainsword, you can get 4 attacks on the charge (5 if you take a Chapter Banner), so they can be an effective shooting and combat unit.
A good choice for a variety of battlefield roles.
Dreadnought:
The same cost and stats as the Space Marine Codex equivalent, but it get Grim Resolve in addition. They Dreadnought benefits from the 4 base attacks that they get in the new codices, making it more effective in combat. The Dreadnought is a great model, but generally a poor unit. If they could get access to front armour 13 like those of other chapters, they would be more effective, as AV12 can be taken out by krak grenades. An OK choice, but there are better options in the codex to spend your points on.
FAST ATTACK
The majority of the units in the fast attack section are the Ravenwing units. These have been looked at in the Ravenwing review part previously.
Assault Squad:
The unit costs the same as in the previous codex (once the cost of jump packs are factored in). The unit now has access to an eviscerator (one for every 5 marines), which is a nice way of hiding two power fist equivalents in the unit that cannot be challenged out. It's a shame that all the assault marines can no longer take meltabombs, this would make it an amazing tank hunting unit. Stubborn assault units are great for holding up the enemy, as the assault marines are probably not capable of doing a great deal of damage to most enemies.
Again, assault marines are a decent, if not amazing unit, but there are far better units in the fast attack sections, namely the Ravenwing units.
That's those two sections done. The next will look at the Heavy Support section and the Lord of War.
DARK ANGELS CODEX REVIEW:
Part 1- Ravenwing
Part 2- Deathwing
Part 3- Special rules, Traits, Psychics and Relics
Part 4- HQ and Troops
Part 5- Elites and Fast Attack
Part 6- Heavy Support and Lord of War
Part 7- Formations
Posted by Mike (St Andrews Wargaming) at 09:00