There is something iconic about the image of rank after rank of Imperial Guard (Astra Militarum to our younger readers) fighting the enemy from a large trench network. After reading the fantastic "Straight Silver" Gaunt's Ghosts novel, I was inspired to create a trench network for my own guard army to fight over and defend.
The idea was to create a modular trench network, made up of 1 foot square sections. This would help both with storage and with variety, as I could re-arrange the battlefield to save me fighting over the same layout over and over. I decided to make eight sections, as this would allow me to deploy the trenches in a 6' x 1' arrangement for a long board edge or in a 4' x 2' arrangement for short board edge fighting.


Looking for ideas online, I came across some great examples of wargames trenches, many features of which I wanted to incorporate.


For my own trenches, I wanted them to come with a step where the models could deploy in firing lines, but would also allow models to be set up out of line of sight. This would force the enemy to have to storm the trenches to get rid of the stubborn defenders. I also wanted a section that would allow for the deployment of heavy weapons, as well as some armour to aid the defenders.

I cut the polystyrene into one foot square blocks and drew out a rough design of the trench network on top of them. The cut out sections were retained in order to use them as a basis for the trench step. This is the only part of the project that I would like to go back and change. The cutter I used for the polystyrene was not great and I struggled to get a straight edge on the polystyrene. As a result, the blocks do not quite sit flush with one another, making it look a bit messier than I was intending.

The polystyrene was then glued onto some thick card and the offcuts for the steps were then cut down to size (about half the height and width of the trench section. The trench step was made from lollipop sticks, cut into different sizes and glued on to the polystyrene. One the steps were constructed and glued in place, the trench section was given a layer of sand. Once the sand was dry, it was given a coat of 1:1 water:PVA with a little washing up liquid in it in order to seal the sand in place. The sandbags were made from clay. This was then allowed to dry thoroughly before the trench was undercoated in black. 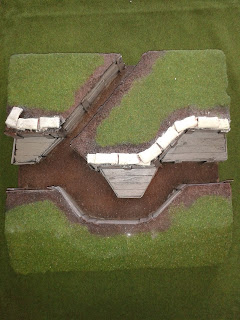 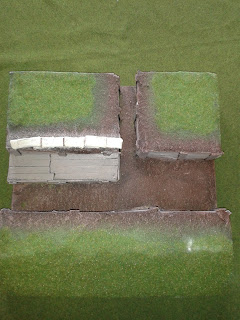 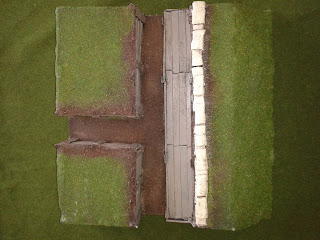 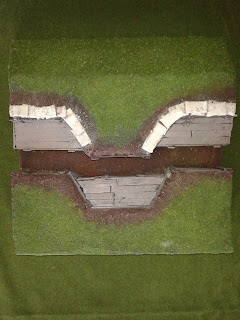 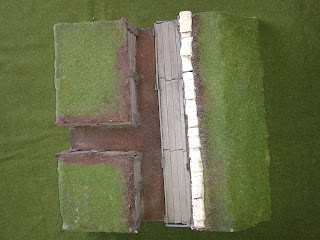 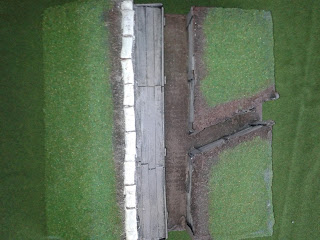 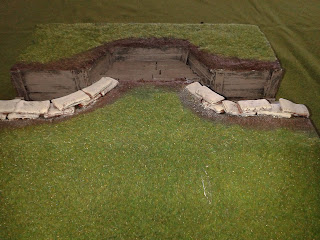 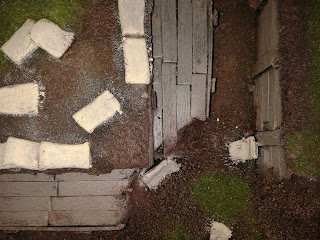