Today I have an army showcase for you, featuring Steven's Astra Militarum force.

Steven got in contact with me on the St Andrews Wargaming Facebook page a while back with some great pics of his force when I was looking for hobby updates from readers. He was prepping them for a doubles tournament he was attending. 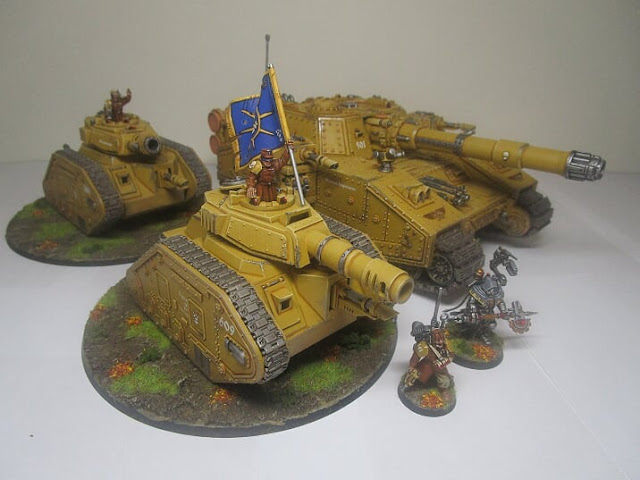 The army is a great Astra Militarum armoured company, with a beautiful paint job on the tanks. I got in touch with Steven to get more info on the force and how he put it together.

1. What drew you to the army?
One of my friends has a Tanith army and we decided to go to the 40k doubles tournament at Warhammer World back in October. Because we wanted the army to be themed we started looking at other regiments that the Tanith fought with in Sabbat Worlds Crusade, because his army was 1000 points of pure infantry we opted for one of the tank regiments as we wanted to get past turn 1.

I choose to go with the Narmenians 1st Armoured Regiment out of the novel Necropolis for three reasons. Firstly, the first time I read this novel it made me want to collect an armoured company but back then my painting skills were not up to scratch to do them justice. Secondly, the mustard drab colour scheme sounded like it would be fun to paint and yellow colours are always a challenge to get to look right. Thirdly, Coron Grizmund is my favourite character from the Gaunt’s Ghosts series so I would be able to convert a model for him and use him as a Tank Commander 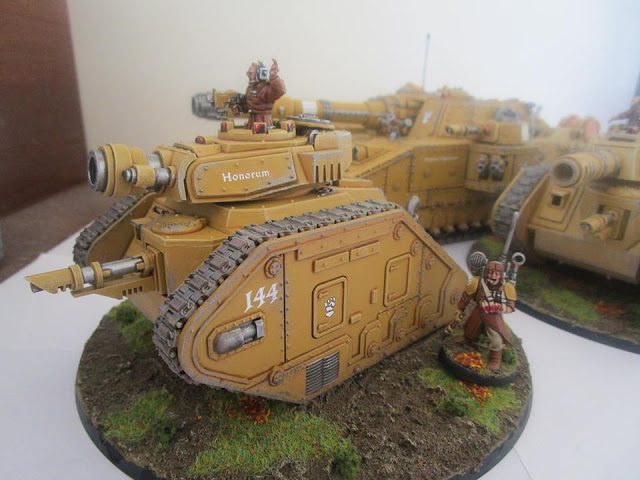 2. What is your favourite model in the army and why?
The Liaison Officer (Company Commander) is my favourite model in the army. I like to imagine that he is a Tank Commander, who has piled out of his Leman Russ Battle Tank after has been destroyed, stopping long enough to grab the vox unit and now liaises between the Tanith and my Narmenians. The main reason I like this model is that I gave him the bandaged arm with sling from the Cadians command squad box set which is my favourite part from the box set. 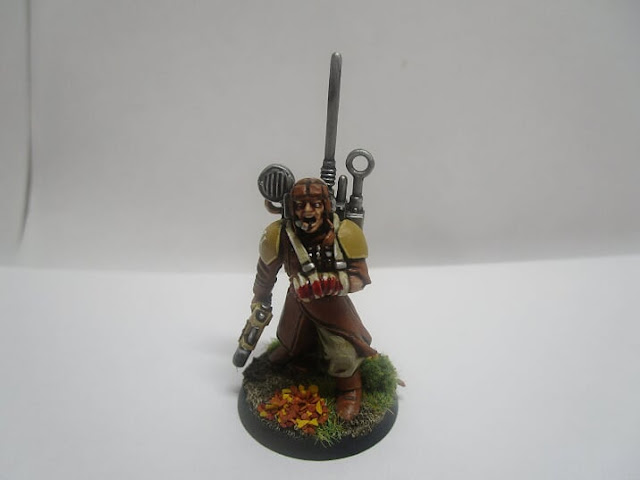 3. is this a gaming army or just for show?
I am more of a painter than a gamer so my plan will be to Display this army until I can add another 500-1000 points to it and then I can start using it at tournaments and in friendly games. My next plan is to build a display board for them so I can enter Armies on Parade next year with them at the store in Durham. 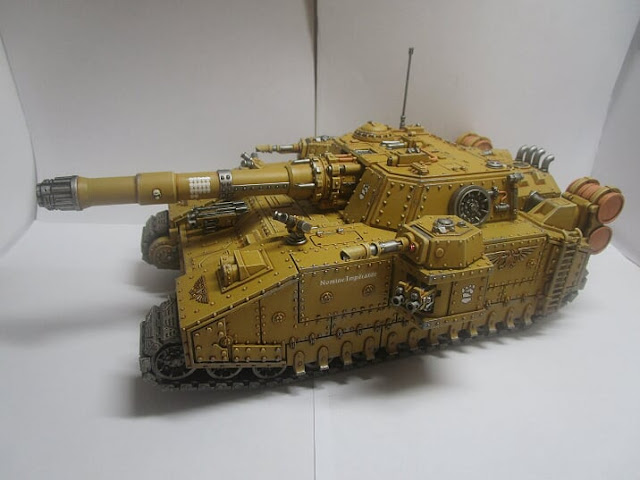 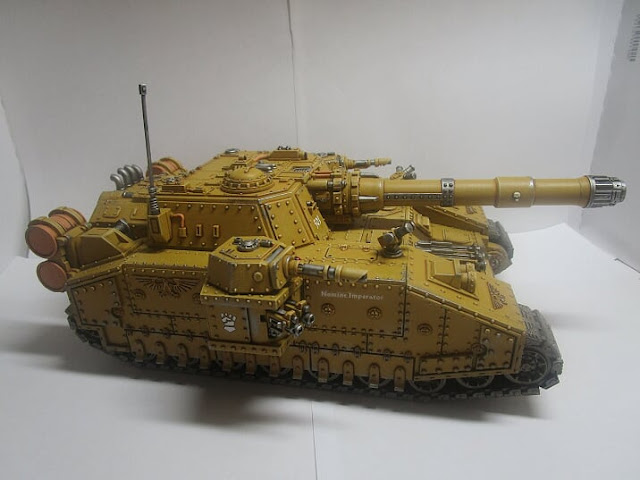 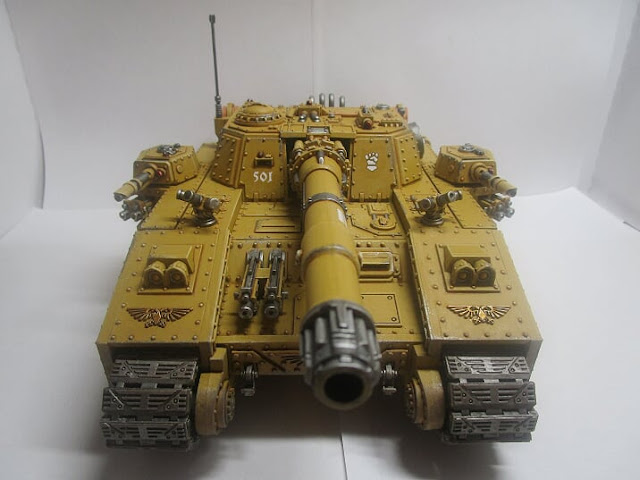 4. Any tips or tactical insights into the army?
Well I have not had a chance to use the army yet so cannot really give any tips. I was going to keep my 3 tanks as mobile as I could on the battlefield, as they would have been our only chance at getting to backfield objectives with the Tanith army being so slow.

5. Were there any special techniques or processes you used on the army?
This army was quite straightforward to paint, so did not use many special techniques. To get a nice smooth coverage on the tanks I do a second heavily watered down coat, which I find gives me a more even finish than 2 thin coats. To create the chipping on the armour I used a piece of foam from a figure case, that I cut into a wedge shape and dabbed Leadbelcher over the areas I felt would have had chipped armour.

The only thing I have left to finish on these models is to create some exhaust fumes which I have done on all my Blood Angel vehicles. To make this I glue clump foliage to a paperclip I have cut to size and shaped, then spray it black and drybrush in various shades of grey. 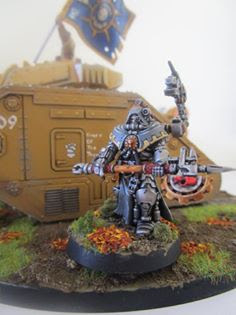 6. What do I plan on adding to the army next?
My next step for this army is to get 3 infantry squads converted up so they look like dismounted tank crews and engineers and 3 Chimeras. This will let me change the army from a Supreme Command Detachment to a Battalion Detachment. I’d then like to add some Hellhounds as they are my favourite tank kit and would let me model some flames so it looks like they are firing. 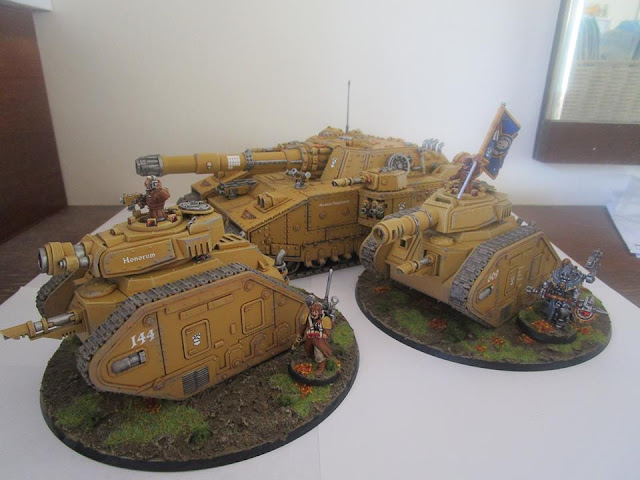 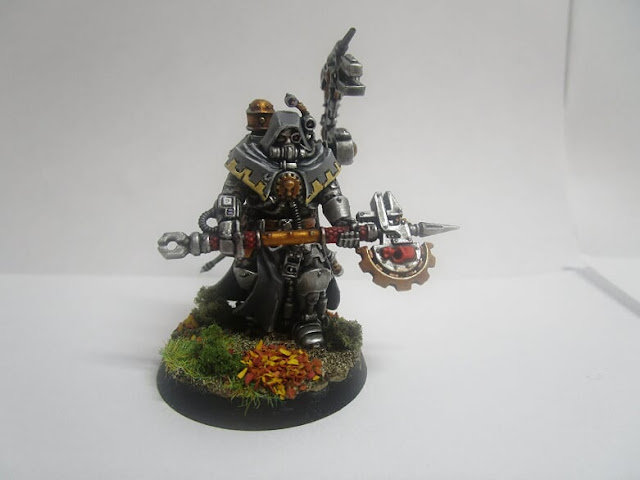 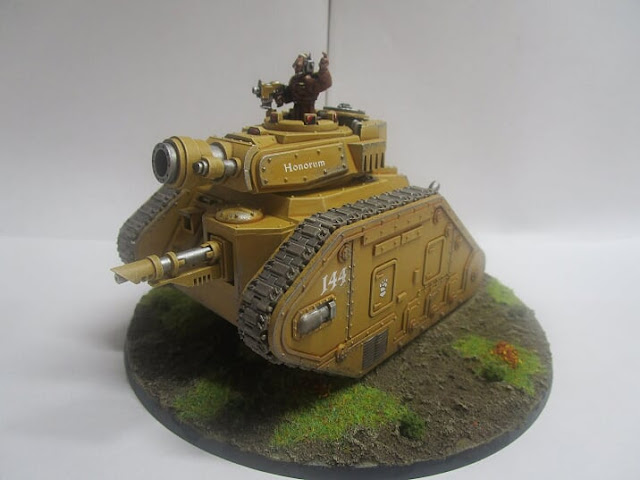 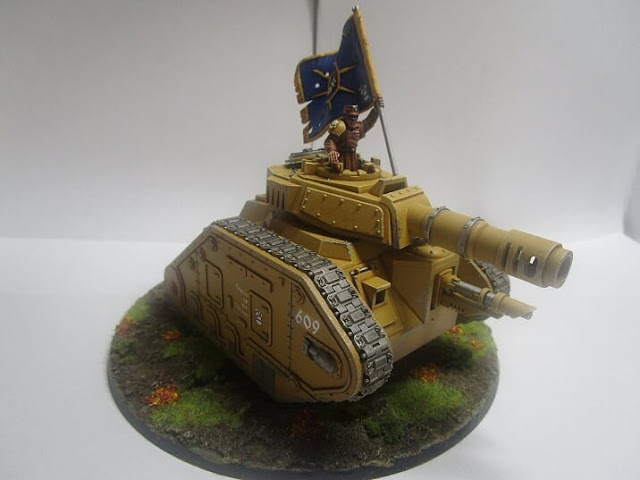 As you can see, this is a great looking force with a strong narrative theme. I think the yellow has turned out brilliantly on the model, and kudos to Steven for giving it a shot, yellow is certainly a daunting colour to paint.

I also really like the bases on the vehicles. I quite like to see a good base on a vehicle, it helps to tie it in with the rest of the army.

Thanks to Steven for taking the time to send me the pictures of his army and to answer my questions. If you have a force you would like to appear on Army Showcase, please get in touch and let me know (corrm83@gmail.com).
Posted by Mike (St Andrews Wargaming) at 09:00