Part 3 of my 8th Edition Ork Codex review will take a look at the Relics and Psychic Powers available to the army. 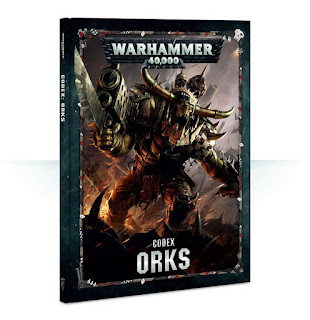 Shiny Gubbinz (Relics)
The Orks have access to a number of useful Relics to add to the characters in the force to help them demolish the enemy even further.

This gets an extra 8 shots and AP-1 over a regular Kustom Shoota. This is actually pretty good, and you should be able to get a decent number of hits if hitting on a 5+ (along with the extra shots). This is a solid choice, but I don't know how often you will see it, as there are simply better Relics available.

Headwoppa's Killchoppa
A big Choppa that is +2S, AP-2 and 2 damage. In addition, to wound rolls of 6+ inflicts 2 mortal wounds instead of normal damage.

Supa-Cybork Body
Gives the bearer a 5+ Feel no Pain type save against wounds. Cannot make a Doc's Tools roll for this model if you do so.

This is a great upgrade for your warlord, as most Ork characters struggle to get an invulnerable save. Gives them a chance of staying alive for longer. I think this is a useful Relic to take in the army.

Da Killa Klaw
A Power Klaw that is Sx2, AP-3 and 3 damage. You can also re-roll wound rolls for attacks made with this weapon.

For me, this is the best Relic by far. No only do you get the maximum damage for a Power Klaw with this weapon, you also get re-rolls to wound and don't suffer the -1 to hit for using the Klaw. This is incredible on a Warboss and I see it being the main go-to Relic in the army. When taken with the +1S and +1A warlord trait, you will be hitting on a 2+ and wounding most things on a 2+ re-rollable. This enables the Warboss to do 15 damage on a single target per turn.

Scorched Gitbonez
Psyker only, you can add 1 to psychic tests taken by the bearer when manifesting a power from the Power of the Waaagh! discipline.

The changes to the Weirdboy rules means that you add to a maximum of +3 to psychic tests from nearby Boyz. This Relic could be useful, but you will probably be getting +3 for most tests in general, so may not have much use for this.

Gitstoppa Shells
Models with Kustom Shoota, kombi-rokkit or kombi-scorcha. You add 1 to the strength and damage characteristic of the weapon.

Again, a pretty good relic. I see it as being more useful on a kombi-scorcha, going up to S6 and 2 damage, and hitting the target automatically. Get automatic hits means you make more use of this Relic.

Another very strong relic for Goffs. The +1 to hit for nearby characters is a great bonus for Power Klaws. Also, the re-rolls to hit and wound are not just failed hits, so you can re-roll those 2's to hit for a standard Power Klaw.

Morgog's Finkin Cap
Blood Axe only. If the bearer is your warlord, you can generate a second warlord trait. If they are not the warlord, the character can take a warlord trait, but do not count as your warlord except for the purposes of the trait.

This is another strong Relic. I can see it as being of use for getting the Blood Axe trait, giving you the chance of getting back command points, as well as a more useful warlord trait.

I'm not sure about this one. It means having the transport vehicle in combat, and not disembarking the character holding the Relic. Odds are you will want to get the unit out and charge them in too, so I'm not sure how often this will be of use. Could be good on a Big Mek that wants to stay in a Battlewagon to keep it safe.

This is great on a Kombi-scorcha, giving you 3D6 automatic hits on an enemy unit within 8". Also great for firing when coming in from reserve, as the Shoota part will be in range. Against weakly armoured enemy units, this can be devastating with a good roll on the number of shots.

Da Fixer Upperz
Deathskulls only. The Bearer gains the Big Mekaniak ability. If they already have the ability, the target of the ability automatically regains 3 lost wounds instead of D3.

I think this is a solid Relic, giving a Big Mek the ability to heal up a vehicle in a very reliable fashion. With some of the tougher Ork vehicles, this will greatly increase their durability.

Brogg's Buzzbomb
Snakebite only. This is a grenade that is 6", 3D6 shots, S5, AP-1, 1 damage. One use only, it automatically hits the target. After the attacks have been resolved, you can select another enemy unit within 6" of the target and they suffer 2D6 hits with the same weapon.

This is incredibly strong too. With some good rolls for the number of hits, this could do a lot of damage to two nearby units. Very powerful!

Da Badskull Banner
Freebooterz only. Once per battle, at the start of of the morale phase, the bearer can fly the flag on the bosspole. When they do so, all friendly Freebooterz units automatically pass morale tests until the end of the phase.

Again, a very strong relic for the Freebooterz. Large mobs of Orks generally don't have too much to worry from in morale earlier in the game, but towards the end of the game this could be the difference between victory and defeat, as units that should be wiped out will survive the turn to either claim objectives or damage the enemy army.

Overall
I don't think there is a single bad Relic in the Ork book. This is quite unusual for the Relics in most codices. For me, Da Killa Klaw is the best by far, able to help your Warboss put out an incredible amount of damage.

I think Da Fixer Upperz is also a solid relic, and it will be useful in my Deathskulls army.

Power of the Waaagh! Discipline
The Orks also get an expanded roster of psychic powers to add to their might. As a weirdboy can get +1 to manifest a power for every 10 Orks within 10", up to +3, you have a good chance of casting many of these psychic powers.

Eadbanger (WC8)
If manifested, roll a D6 and compare to the toughness of the closest enemy model within 18" of the psyker. If the result is higher than the model's toughness, it is slain.

Pretty meh for me. First off, you will need to roll a 5 or 6 to kill most enemy infantry. It could be useful to slay an enemy character outright, but you need to be able to position the Weirdboy to target them, then hope you roll high enough to kill them. I'd probably give this one a miss. Pretty expensive to cast as well.

Warpath (WC7)
A single Ork unit within 18" gains +1A until the start of your next psychic phase.

This was a power in the index and is still incredibly strong. Going up to 3 or 4 attacks on a unit of Boyz really increases their damage output. Also great for units such as the Warboss, Nobz or Meganobz. A solid power that will probably make most lists.

Da Jump (WC7)
Select a friendly Ork infantry unit within 12". Remove the unit and re-deploy them anywhere on the battlefield at least 9" from an enemy unit.

Another solid power, great for quickly re-deploying to grab objectives or threaten an enemy unit. This often gets used on the first turn to push a big threat on the enemy army, but the unit is normally wiped out pretty quickly. Does get around the fact you can't bring in reserves on turn 1, giving you a lot more mobility at the start of the game. I don't think this is as essential as it was, thanks to the Tellyporta stratagem and others, but still a very useful power to have.

Fists of Gork (WC6)
Affects a friendly Ork character within 12". Add 2 to that character's strength and attacks characteristics until the start of your next psychic phase.

This is an incredibly power for boosting the ability of a character. This will take a Warboss with a Power Klaw up to 6 attacks and S8. Your warboss will be wounding Imperial Knights on a 2+ with a Power Klaw! This will turn him into a combat monster, especially if you pair it with some other warlord traits and relics.

Unlike other similar powers, this is not capped at rolling for a maximum of 10 models. This means that it can be very powerful for targeting big units of 20 or 30 models. The chance of getting to roll again for the unit on a 10+ is also a nice bonus and a chance to do extra mortal wounds.

Roar of Mork (WC8)
Subtract 1 from the Leadership of enemy units within 18" of the psyker when the power is manifested until the start of your next psychic phase.

A decent enough power for making enemy units succeptible to morale. Not sure how often it will have an effect, I probably won't take it much, as there are better powers in the discipline.

Overall
A solid set of powers. I think Da Jump, Warpath and Fists of Gork are the strongest by far on the table. I can see the Warphead stratagem being very useful for taking and manifesting two powers per turn with the psyker.
Posted by Mike (St Andrews Wargaming) at 09:00