ATTEN-SHUN! Good grief, is that the best you can do, you 'orrible lot? I've seen Orks with better parade ground muster than that. Now listen up, boys, by the benevolence of the great God Emperor of mankind his very self, today we have a special guest to talk to you lot. A veteran of many a glorious battle. You listen up good and you wet behind the ears recruits might survive long enough to be of some use to the Imperial Guard. Here's Trooper from Cadian Shock. What do you mean "who's that"?- drop and give me 20 right now you sorry sacks of grot dung! 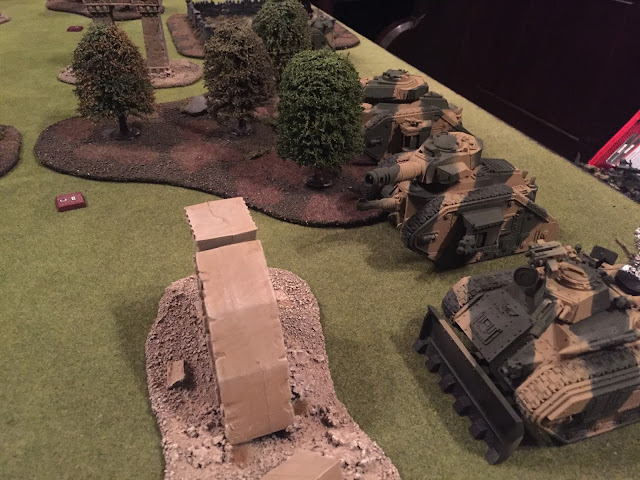 Cadian Shock focuses on Trooper's journey to build, paint and game with his Astra Militarum army. As he mentions below, it is very much a blog for beginners. 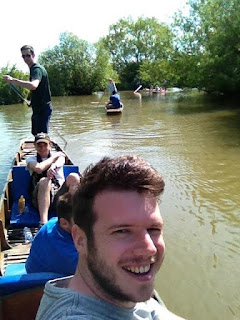 What I like about Trooper's blog is that it is very much a detailing of his own hobby experiences about constructing his Imperial Guard army in all aspects. You can find articles on getting started with the Guard, his tips on batch painting Guardsmen, magnetisation of various tank models, as well as hobby progress posts on getting his army completed.

In addition to all this, you will get regular army list postings to critique and improve, battle reports from his games and battle report Debriefs that look at how his army performed in the battle reports and what could be improved in the army.

The blog reads very much like a player who is always evolving his army, looking at new unit combinations or trying out new combinations (including an attempt to make an Imperial Guard Deathstar of all things).

One great series of articles worth checking out on the blog is his Social Media Guide. This gives you some very useful information on using social media to promote your blog or discuss hobby content online and was great for me when I was first looking into getting into blogging. In fact, I set up my gaming twitter account (@standwargaming) based on the advice from these articles. Trooper is also pretty active on twitter (@CadianShock) and you can often find him commenting and liking various tweets to do with a variety of 40k topics.

So here are Trooper's answers to my questions:

1. What age did you get into gaming and what started it off?
I started when I was around 7 and played/painted 40K until I was perhaps 15 or 16. I then sold everything for beer money, big mistake. Two and a half years ago I restarted with the Imperial Guard and my blog.

2. What was the first model you ever bought/painted?
A Space Marine from the 40K 2nd Edition starter set, where is it now I have no idea.

3. What is your favourite aspect of gaming?
I think it varies between modelling/painting and playing. I love both equally I think, although I tip between favouring one or the other fairly quickly. Last week I beat the Tau (which is always fun- Mike), this week I am itching to paint and complete some more models.

4. Fondest memory in gaming?
Every single moment spent with Pask. 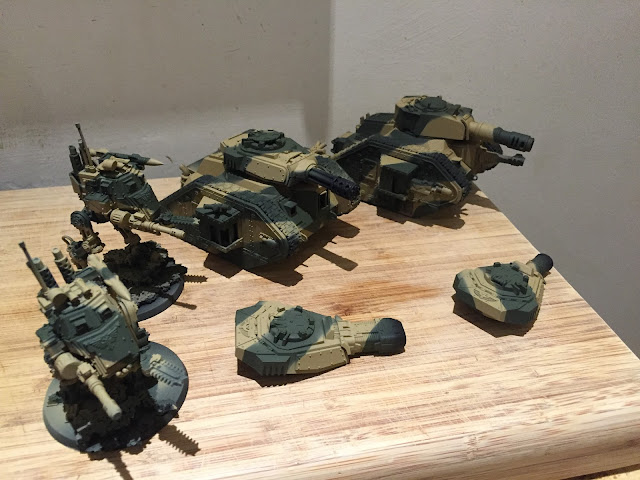 5. What are you working on right now?
A Chimera, its the first vehicle I will complete with my airbrush, still lots of details to do though! That's RIGHT NOW, other works in progress include just about every single model I have ever bought! (Ah, a proper hobbyist then- Mike) 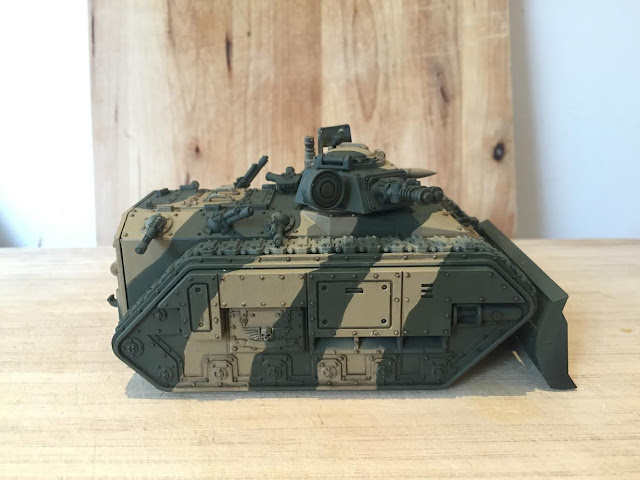 6. When you are not conquering the tabletop, what do you do?
I am a web developer which is in itself a hobby; I am self taught as are much of the web community I think. Currently learning NodeJs which is another hobby at the moment. Now how can I bring make 40K meet NodeJs…..

7. What would you say about your blog to someone who has never read it to draw them in?
Its for newbies, its for fun and I try not it take it too seriously! Its for people who are on a journey discovering 40K. Stay a while, read this and that and leave a comment - I will get back to you! But don’t expect pro tips on painting weathered tracks!

8. What is your favourite article that you have written?
No single favourite, but my series on Social Media for hobbyists has been really well received I think. I still get really good feedback about it even now and I have not added to it for nearly a year. (http://cadianshock.com/category/social-media-guide/)

For a single article, if you pushed me it would be the Rapid Deployment Paint Station for the sheer joy and creativity of it (http://cadianshock.com/rapid-deployment-painting/)

9. Which rule would you like to see changed or removed entirely?
Too many units are fearless or close to fearless so morale checks, pinning, tank shock, etc are just about worthless. The 41st millennium is a scary place and the rules don’t reflect that! It should be easier to render a unit ineffective other than killing it (e.g. via leadership tests).

10. Which of your armies is your favourite?
Imperial Guard! 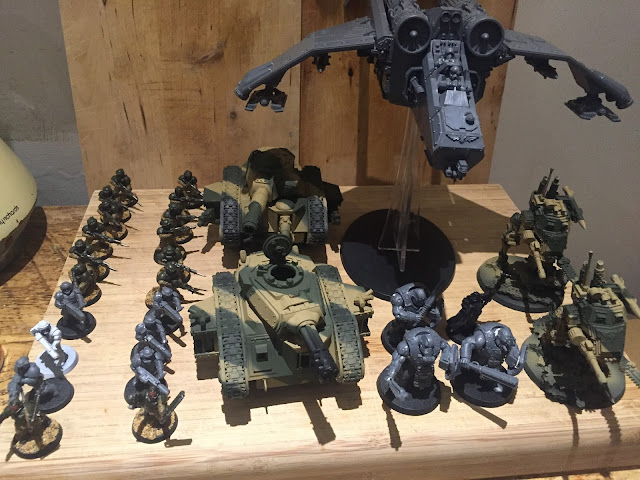 11. Secret wargamer or loud and proud?
Loud and proud. My friends and my partners friends know about my hobby, as do numerous clients. I get some jokes and jibes, but everyone is always interested - a little, I think. Even if they aren’t, I talk their ear off!

12. Any hobby tips or cheats to share?
Use your fingers…. in battle report photography to remind yourself which turn you’re on. 1 finger up “top of turn 1” 3 fingers down “bottom of turn 3”. Middle finger only, Necrons turn. 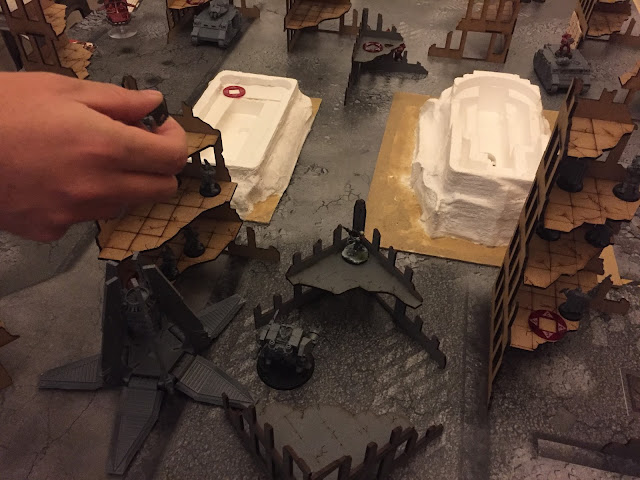 13. Tournament or Casual?
Casual, I would like to play a tournament some day for the fun of it. I can’t win, I play Guard.

16. McDonalds or Burger King?
McDonalds for lunch, BK for dinner

Thanks to Trooper for answering my questions. Be sure to check out his blog and comment (the social media guide is definitely worth a look).

If you have your own blog (doesn't matter how young or old) and would like to take part in the Better Know a Blogger series, email me at corrm83@gmail.com ﻿
Posted by Mike (St Andrews Wargaming) at 09:00