As is customary for any of the tournaments that I have attended, I will now review my army for the doubles tournament, how it performed on the tabletop and how it could be improved. For some context for the review, you can find the battle reports for Game 1, Game 2 and Game 3 on the links shown. As a reminder, my 1000 pts army for the doubles tournament was:
Combined Arms Detachment
Kor'sarro Khan- Moondakken
Librarian- Mastery level 1, Bike, Meltabombs, Hunter's Eye
5 Command Squad- 4 Grav guns, Apothecary, Storm Shield
5 Bikers- 2 Grav guns, sergeant has meltabombs
5 Bikers- 2 Grav guns, sergeant has meltabombs
5 Scouts- Bolt pistols, combat weapons, Sergeant has Meltabombs
Landspeeder Storm- Cerberus launcher, Heavy bolter
Drop Pod- Storm Bolter
Stormtalon- TL assault cannons, Skyhammer missile launcher

Kor'sarro Khan
My usual warlord for my White Scars, generally Khan provides some great bonuses for my army. Giving the bikers Scout and getting a morale check re-roll came in very handy during my games.

The Scout ability only came in useful in game 3, allowing me to Scout forward and grab an extra objective for the maelstrom card. I did not Scout in game 1 as we were unlikely to get first turn and I wanted to keep out of range of the Y'vahra and other Tau units. In the second game, it was probably a mistake to Scout forward for two of my biker units. This allowed the units to be charged by a Knight in the first turn and the other unit to be wiped out by the firepower of the Mechanicus Vanguard. Even though I did not utilise the ability too much, it is one that I would rather have and not use than need to use it and not have it.

Khan did ok in combat in the first game, only managing to take out some Kabalite warriors and surviving the game. He was wiped out in a Stomp attack in game 2 and did some damage in game 3 against his fellow space marines.

I would include Khan again in a tournament army, he provides a lot of bonuses to a White Scars army for his points cost and can sometimes do well in combat against 3+ armour saves.

Librarian
In rapid fire 2015, I took a level 2 Librarian on foot in a unit of grav Centurions in a drop pod. I feel the Librarian was wasted in the list and didn't really achieve all that much.

For this list, I took the Librarian on a bike to keep up with the Command Squad and gave him the awesome Hunter's Eye. He was also only a level 1 as I did not have the points to spare to upgrade him.

What a difference it has made between the tournaments. In combination with the grav Command Squad, the Hunter's Eye was great. With ignores cover, grav guns can take out just about any unit on the tabletop.
For my psychic powers, I rolled on Telepathy in each game. The ballistic skill bonus that Hunter's Eye provides was great for psychic shriek, allowing me to hit most of the times that I used it when I was not jinking. This was one of the first times that psychic shriek has worked well for me, only failing to wound once in all the times that it hit. I was unable to roll Invisibility in any of the games, getting Hallucination, Dominate and Mental Fortitude. None of the other 3 powers were too successful for me in my games, with psychic shriek being the best by far.
I never went for Prescience with my Librarian as I frequently struggle to cast it with a level 2 psyker and didn't think I would have much chance with a level 1.

I would definitely take the Librarian again. In a higher points list, I would probably upgrade him to a level 2 and take Psychic Shriek and Prescience as standard (unless I roll Invisibility on my first roll on telepathy). Prescience in combination with the Hunter's Eye and Grav guns would be a powerful combination.

Command Squad
The Command Squad generally did quite well at Rapid Fire 2015 and did very well in the doubles tournament too.

The Apothecary did amazing in this tournament. I recall making more Feel no Pain saves in these three games than I had any right to make, and he certainly showed his worth this time again.

The grav guns were useful, but I spent a lot of my games Jinking with the Command Squad and did not get to use their to their full capabilities. In combination with the Hunter's Eye, I cannot afford to have the command squad not firing to full effectiveness every turn.

I think that arming the entire Command Squad with Storm Shields is the way to combat this. This would give them all 3+ invulnerable saves, better than they would normally get with Jinking (as these cannot be denied with Ignores Cover weaponry). This would allow me to fire to full effect with the grav guns each turn and could help me against the bane of Ignores Cover that markerlights, the Y'vahra and Heldrake that normally hit my army very hard.

I would also add meltabombs to the entire unit. This would be very useful for taking out units that can neutralise the Command Squad in combat, such as Knights or monstrous creatures. In game 2, I might have been able to take out the Knight in combat had a few more of the squad had meltabombs (the Knight was down to one hull point and the Librarian missed with his meltabombs). 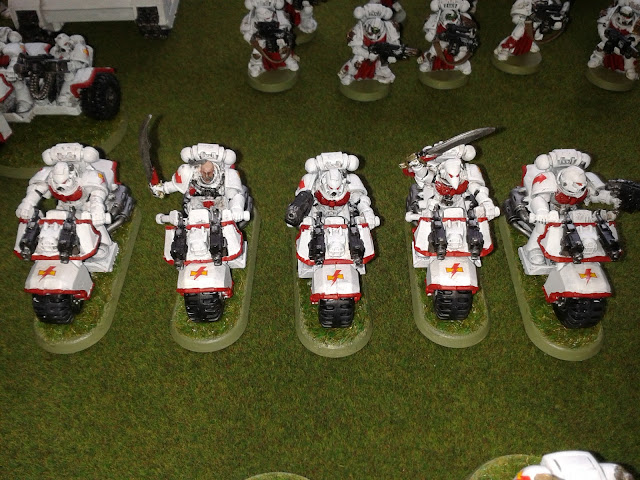 As the missions were all maelstrom in the double tournament, I primarily used the bikers for grabbing objectives rather than for their firepower. This meant they spent most of their time Jinking for added durability or turbo-boosting to get into position. This meant that their grav guns were not of mucn use in the three games, but they didn't need to be for grabbing the objectives.

As I said, key units in my armies that will generally always be included in a competitive list.

Scouts and Landspeeder Storm
A like these units in my list. They don't do a huge amount of damage and can easily give up First Blood to your opponent, but they are an extremely fast objective secured unit (up to 30" move per turn) and the blind from the Cerberus launcher can come in useful, particularly against Tau or Necrons.

The Scouts were useful in this tournament, grabbing me objectives in all three of the games. The Landspeeder storm also managed to blind a few units over the course of the three games.

Drop Pod
This was taken purely to get my Mechanicus allies where they needed to go. It was also useful for grabbing objectives that were harder to reach, but as it was not objective secured, it was sometimes limited in what it could grab. 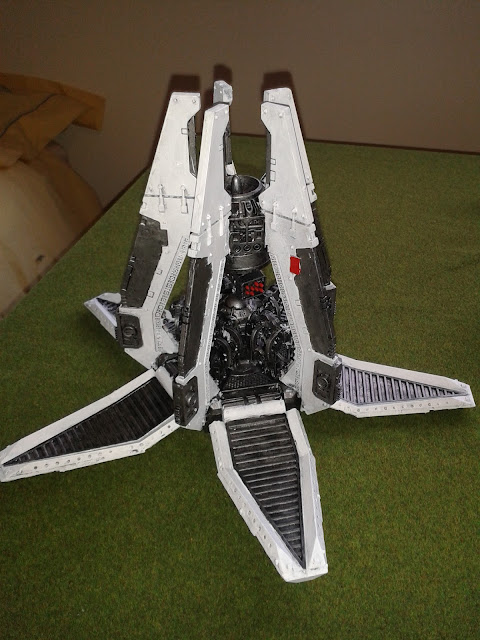 Its main use was for getting the Dominus and Vanguard into position to use their weapons more effectively and for that, it did its job great.

Stormtalon
This was taken to combat any enemy flyers that we may have come across, but also to put out a decent amount of firepower. 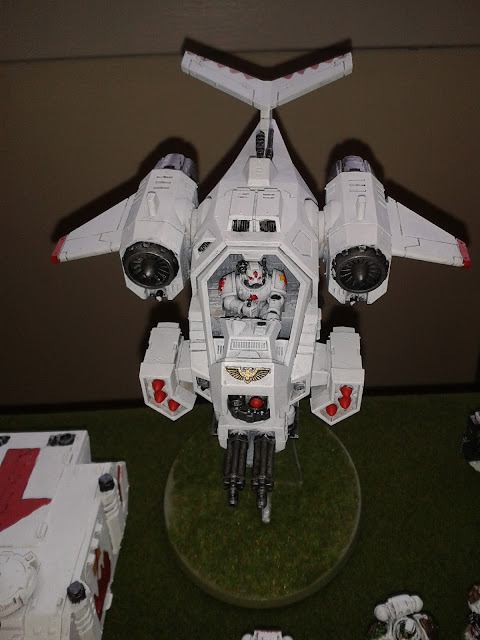 Strafing run means that against ground target, you are practically guaranteed 4 hits with the TL assault cannon, while you should get quite a few hits with the Skyhammer missile launcher. The Stormtalon performed very well in most of the games, but did not do a huge amount. This was mostly due to it arriving turn 3 or later and all the games being very short (only one went on to turn 4).

I would definitely take it again as it puts out a lot of firepower, is very fast and can score objectives at a pinch.

Mechanicus Allies
Not part of my army as such, but an army in its own right commanded by Innes.

The Dominus was a nice commander to have in the army. With a 2+ save, 4+ invulnerable and Feel no Pain (6+, I think), he was able to take a fair amount of damage that was levelled at the Vanguard to keep them alive in all of our games. He also had some decent firepower and combat ability that was useful.

The Vanguard were also a very powerful unit. Their guns are able to do a fair amount of damage to many units in the game.

The Dunecrawlers were great in the army. The Neutron Laser is a very powerful weapon. A small blast with S10, AP1, it is able to kill most units in the game. Over the course of our games, it took out a unit of Wraithguard and put a lot of damage on an enemy Knight (though only in the shooting phase).

The one drawback of the Mechanicus elements is that they are very slow. No unit really moves more than 6" per turn and you don't really want to run them as you will be losing out on their firepower. As a result of this, Innes really struggled to score many of the maelstrom objectives in our games as his army was fairly static once it was deployed.

The Knight Atropos was an absolute beast in all the games. Any ranged D weaponry is going to be powerful on the board. Even though it is short ranged (9" I believe), it pretty much obliterated whatever it was fired at. The fact it is also D in combat is very powerful too. The second cannon that has a 1 in 6 change of becoming vortex is also great and was a huge help in game 1, effectively taking out the Stormsurge in one shot. The Knight only survived one of the three games, but in those two games, our opponents had to put a lot of firepower into taking it down.

Summary
Overall, both armies performed very well. We were careful to play the mission in each game and not just focus on destroying the enemy army (though we managed this in many of the games).

I was surprised how long each game took. I thought that a doubles tournament game would go very quickly as you were each commanding one section of the army, essentially 1000 pts each and a turn would not take long.

As it was, between discussing the plan for the turn and what objectives to go for, then sometimes having to wait for your opponent to be free before you could make your attacks, the games actually ended up taking a long time to play. This will be interesting for the upcoming Double Trouble tournament, as I may not have time to take good notes and photos of the game as I feel I may slow up play too much.