Welcome to the first part of my Space Wolves codex review, looking at the new stratagems available to the army. 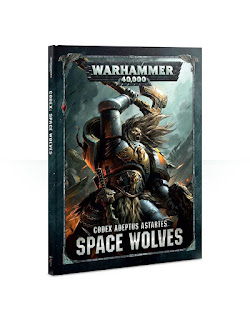 For this codex, I am not planning to do a full codex review. I will simply be looking at the generic army special rules, such as stratagems, psychic powers, warlord traits, etc in the book.

A decent stratagem for only 1CP. You get full re-rolls to hit against one specific enemy unit. With the +1 to hit from the Space Wolves' Chapter Tactic, this should give you a lot of hits in combat. You can only use it against enemy units with a higher power rating, so may be too powerful for the Blood Claws or difficult to get one if you have a big unit. It also might be difficult to remember which enemy units have a higher power level.

Cloaked by the Storm (3CP)
Use in the psychic phase. Select a Rune Priest that successfully manifest a psychic power. All units within 6" are at -1 to hit when targeted by enemy units with ranged weapons.

This is an expensive stratagem at 3CP, but could be very powerful in the right circumstances. Normally these types of stratagems cost 2CP and only affect a single unit. However, with a 6" bubble on the Rune Priest, this has the potential to affect several enemy units for a single turn and well be worth the 3CP cost to use it. It does rely on you successfully manifesting a psychic power, but you can wait to see if successful before using it, so as not to waste the command points.
This would suit a rune priest supporting a gun line to help keep them safer from enemy firepower and the range should allow him to protect a large number of units. At 3CP, you won't be able to use this for very long before running out of command points.

Cunning of the Wolf (1CP)
Use during deployment on a Space Wolves infantry unit. The unit can be placed in reserve and can deploy at the end of any of your movement phases, wholly within 6" of any battlefield edge and at least 9" from an enemy unit.

This is a great stratagem for keeping units off the table and to launch an assault into the heart of the enemy army, allowing you to come on from any board edge. This could be very powerful against gunline armies or for units that don't want to walk up the board, such as Wulfen. As this is a pre-game stratagem, you can use it multiple times to put several units in reserve.
This is helpful for keeping you safe from enemy firepower before you deploy, as well as getting very close to the enemy army. Can't be used for more powerful units such as Thunderwolf Cavalry, but useful for units such as Wulfen and Terminators. 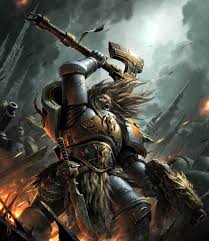 Mentor's Guidance (1CP)
Used in the shooting phase or fight phase. Select a character within 6" of a Rune Priest. The character may re-roll all failed wounds for the character in that phase.

Lone Wolf (1CP)
Used at the end of the phase when a Space Wolves infantry unit has been reduced to a single model (not a character or Wulfen unit). The model's wound characteristic is increased by 2, it gains the character keyword and can re-roll failed to hit and to wound rolls for the rest of the game.

This is an awesome stratagem when you are able to use it. It might be tricky to have a single model left in a unit, but when you can use it, it will be great for creating a super soldier in your army for only a single command point. Would be very useful on a unit such as Terminators or a Sergeant with a good combat weapon.

Chooser of the Slain (2CP)
Use when your opponent sets up a unit arriving from Reserve. A Space Wolves unit within 6" of a Rune Priest may fire at the enemy unit as if it were the shooting phase, but at -1 to hit.

This is similar to the Aeldari stratagem and a version of Auspex Scan. You are not limited to a range of 12" to the enemy unit, making it more powerful than Auspex Scan and allowing you to, for example, target the enemy unit with a unit of Long Fangs. It is also not limited to an infantry unit firing, meaning you could target it with a vehicle or flyer. However, it is limited to having a Rune Priest in your army and the unit being close to the Rune Priest for it to be used. However, even with these limitations, it is a very strong stratagem to be able to use.

A very powerful boosted version of Insane Bravery. Could be very useful if you have several units in range of the Wolf Lord needing a morale test, and could help cause more casualties from a successful combat near the Wolf Lord. The 12" bubble is huge and should allow you to cover a wide range of units. 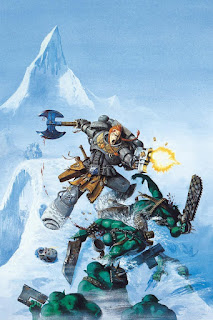 True Grit (1CP)
Use in the shooting phase. Select a Space Wolves infantry unit within 1" of an enemy unit. The unit may fire all Auto Bolt Rifle, Bolter, Bolt Rifles and Bolt Carbines as if they had the Pistol 2 type (can't fire other pistols as well).

This is another great stratagem for being in combat with an enemy unit, allowing you to fire two Bolter shots for each Space Wolf in combat. This could help you finish off a damaged or weak enemy unit in your turn, allowing you to then charge another nearby unit in the Fight phase. Very useful in the right circumstances.

Overwhelming Savagery (1CP)
Use in the Fight phase on a unit of Thunderwolf Cavalry. They can re-roll to wound rolls of 1 for that phase.

Talismanic Shield (1CP)
Used at the start of the enemy psychic phase. Choose one Space Wolves character, they can attempt to deny a psychic power as if they were a psyker.

Another useful stratagem to allow you to potentially block enemy psychic powers if you have no Rune Priest or none in range.

Keen Senses (1CP)
Used in the shooting phase. Choose a Space Wolves unit, they unit suffers no penalties to hit that phase.

This is an incredible stratagem and an absolute bargain at only 1CP. This is very strong against those armies with the ability to stack multiple negative modifiers against enemy shooting, such as Aeldari and Drukhari. Also great for Long Fangs, allowing you to move and fire to full effect for the phase. I can see this one being very popular with Space Wolves players. 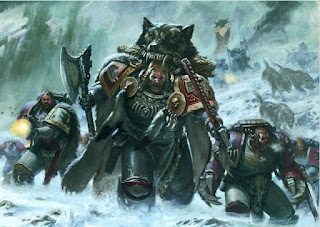 The Emperor's Executioners (1CP)
Use in the fight phase against a unit of Thousand Sons. Each time you roll a 4+ to hit, you can make an extra attack using the same weapon (they cannot generate further attacks).

Very useful when facing off against Thousand Sons. With the +1 to hit from charging, you will be generating a huge number of extra attacks against such units, allowing you to deal a lot more damage to Thousand Sons units.

Overall
The Space Wolves have access to some amazing stratagems of their own. Keen Senses is fantastic for a unit of Long Fangs or any vehicles, allowing them to move and fire to full effect. Cloaked by the Storm is also a fantastic ability to use on a Rune Priest and could save you from a lot of damage when used correctly.

Many of them have a strong focus on using a Rune Priest, meaning you are likely to see them pop up in the Space Wolves army to make the most of the new stratagems.

In fact, I don't think they have a single bad unique stratagem available to them. I don't think you will use them all the time, but there are several that could be very useful in the right circumstances.
Posted by Mike (St Andrews Wargaming) at 09:00