Games Workshop recently announced that the Deathwatch codex will be coming this year. This was quite a surprise, as I expected this to be one of the last to come out, being a relatively new Faction in the game. I was very happy about this, as the Deathwatch are one of my favourite armies. I love the look of the army, as well as the background for the force. 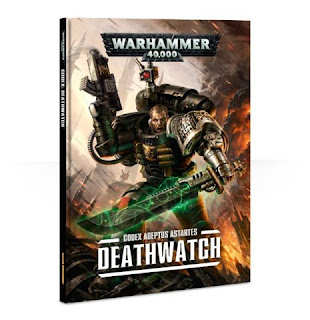 It helps that my Deathwatch are one of the armies that I have painted to a higher standard than my others, so any excuse to field it or take it to tournaments is something that I would jump at.

I've made no secret of the fact that my Deathwatch are struggling in 8th edition. They are very expensive Marines that lack a lot of durability. They can hit hard in shooting and combat in the early turns, but really suffer in the long game.

With the new codex coming out, here are some of my thoughts on what I would like to see in the book and how the Deathwatch could potentially improve.

Deathwatch Veterans
The basic Deathwatch Veteran is a little overpriced for what he can bring to the table. At 19 pts per model, he is just a Veteran Marine with some Special Issue Ammunition. This discrepancy got even worse with the release of Chapter Approved, where Primaris Intercessors went down to 18 points per model.

The initial fix would be to lower the points cost of the Deathwatch Veterans. However, I'm sort of in agreement with Nick over at the Burning Eye. He mentioned a while back that the Deathwatch should remain an elite force. Lowering the points would go against this, allowing you to field more models in the army.

Therefore, I think it would be nice to increase the number of wounds each model has to 2. This would take them into line with Primaris Marines and make their price comparable. Alternatively, some form of feel no pain save for the army would be a nice boost if they wanted to keep them at one wound each.

Frag Cannons
This is probably a pipe dream, but I would love to see the range of the Frag Round on Frag Cannons increase to 10" or 12". There is something quite pleasing about the image of a Deathwatch Drop Pod crashing to the ground and the squad inside spraying the Xenos filth with cleansing fire.

It will probably stay at 8", but it is nice to dream. Increasing the range would make the Deatwatch's best weapon more effective and give them a nice alpha-strike capability once more.

I think these need to be cheaper and have a flat damage of 4 or 5 to even make them worthwhile.

Corvus Blackstar
I think the Deathwatch flyer really needs to gain Power of the Machine Spirit. It is one of the only Space Marine heavy flyers that does not get it. Even giving it Strafing Run would be a big boost to its accuracy against most enemy units.

As it is, I think it is too expensive for the low accuracy firepower that it has at the moment.

Stratagems
I can see most of the stratagems being focused on killing Xenos units, as it should be for Deathwatch.

I would like them to get the generic Space Marine once like Hellfire Shells, Flakk Missiles and Auspex Scan. The last one would be particularly useful, as Deathwatch are likely to still lack cheap screening units in the codex. Getting to fire on enemy units before they can attack would be a big boost for the survivability of the army.

I would also like to see some form of deep strike stratagem, allowing Kill Teams to teleport in to battle. Certain Kill Teams could do this in 7th edition, so it would be nice to have the ability again, as mixed Kill Teams are more limited in their deployment and transport options.

Chapter Tactics
Not sure what these would be for the Deathwatch. I would like to see something similar to the old Mission Tactics rules, where you could change your Chapter Tactics during the game to better suit the situation on the tabletop.

Overall
So, those are some of my initial thoughts for the Deathwatch codex. I would love to see them become a competitive army once more so that I can have fun fielding them more often.

Are you excited for the new codex? What would you like to see included?
Posted by Mike (St Andrews Wargaming) at 09:00