Welcome to the first part of my review on the new 8th edition rules for 40k. In this part, I will be taking a look at the core rules and my initial thoughts on them. 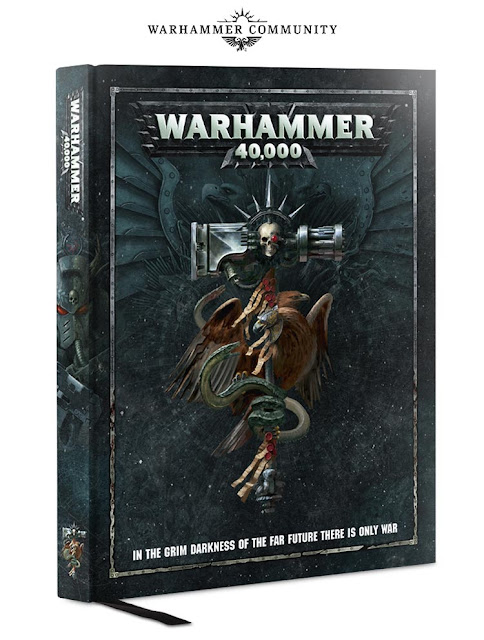 Rule Length
One of the huge differences between 7th and 8th edition is the length of the core rules for the game. Seventh edition featured a huge number of rules, so many at times that they were hard to keep track of despite having played the game for years (does anyone know what Soul Blaze did even now?).

In 8th edition, the core rules are condensed into 8 pages, making it really simple to read through them and learn them quickly. Now, I know that much of the USR-type rules and intricacies will be covered in the datasheets for units, so there is not such a huge reduction in the number of rules, but it is nice to be able to learn the rules for the main game in under 10 minutes.

I picked up the Dark Imperium boxed set and was very happy to see a small booklet containing the core rules of the game. Great for referencing during a game or if you don't want to take the main rulebook with you all the time. Overall, I am a fan of this new format. I would love to see GW release a smaller rulebook with just the core rules and rules for the different scenarios in it. As much as I like the background section, I don't really need it in the rulebook and would much prefer a smaller book to take with me to games.

Movement Phase
There are some changes to 8th edition that I really enjoy in the movement phase.

Terrain is now no longer such an issue for movement, as most units are not slowed by terrain in the movement phase. I'm also glad that dangerous terrain tests are essentially gone; no more killing my Bikers on tree roots and rocks! The advanced rules for terrain provided some penalties for assaulting on or through terrain, similar to Age of Sigmar.

Falling back is also an interesting new mechanic. I'm sure it will take a fair few games to get used to this, but it should add a lot of tactical complexity to the game and actually make screening units more useful in the game.

Psykers are now told how many powers they can cast each turn on their datasheet. Similar to the AoS mechanic, you simply need to beat the casting value on 2D6, with perils occurring on a roll of 2 or 12.
This will remove the mechanic of many smaller level psykers funnelling dice to a more powerful psyker to cast a huge number of spells each psychic phase. Perilling is also easier, causing D3 mortal wounds on a peril, with nearby unit potentially being harmed if the psyker is killed. I like the simpler mechanic. I rarely ran psyker in 7th edition, as I felt they achieved very little unless you went for a lot of them. In addition, I could never remember the results of the Perils table, having to look them up every time I had to roll.

With the changes to the new psychic rules, I will probably be running at least one psyker in many of my army lists.

Shooting Phase
One of the best changes to 8th edition is every unit getting an inherent form of split fire. Not only that, individual models can shoot at different unit with different weapons if they wish to. Now my Terminator with Cyclone Missile Launcher can fire the missiles at an enemy vehicle and add his Storm Bolter fire to the rest of the squad's target.

Another great mechanic is not being able to target characters unless they are the closest model in line of sight. Having played a few games of AoS, it is far too easy for your characters to be picked off by enemy firepower before having any impact on the game. With firepower being much greater in 40k than AoS, it definitely needed this kind of rule to prevent characters from being next to useless in the game.

Weapon Types
There were also a few changes for the different weapon types in the game.

Assault weapons can now be fired even if a unit advanced (ran), but at -1 to hit. This is pretty useful for many of my units with assault weapons, such as Deathwatch Frag Cannons (that hit automatically anyway), Ork Shoota boyz or even Ravenwing Black Knights. The Plasma Talons on Black Knights are now assault 2, meaning the unit can advance and still fire them, and even get a bonus invulnerable save when they do advance. The -1 to hit can be tempered by having a character that allows re-rolls to hit.

Heavy Weapons can now move and fire with a -1 to hit penalty, rather than having to snap fire. I can see this making units with Heavy Weapons far more effective when on the move, as unless you had a high volume of fire heavy weapon, the snap shot was not hitting most of the time. It's a little annoying that the -1 to hit applies to almost every unit in the game. It makes sense for infantry, but I might have liked to have seen vehicles or units such as Terminators being exempt from this penalty.

Rapid fire weapons are pretty much as they were in terms of firing. However, the big bonus is that they no longer stop a unit from assaulting if they fired them. You can now unload with your Space Marine squad and still charge into combat with them to try and finish off the enemy.

Another new addition to the game that I really like is that all unit can now be hurt. It was extremely disheartening to come up against a Wraithknight or Imperial Knight in 7th edition and know that there was little in your army that could even hurt them. Now, at least you have a chance of damaging them with shooting or close combat attacks on even your basic infantry.

Another thing that I like is removal of the "wounding the closest model" game that could be played on multi-wound models. It was possible to simply cycle round the models so that each could suffer a few wounds without any being removed from play. Now, you have to take wounds on wounded models first, so your firepower will actually be doing damage to such units.

Terrain and cover has also now been "fixed". I've lost count of how many debates I had in 7th edition about whether a unit was in cover, or was obscured or would gain the benefit of cover. Now, the entire model/unit must be in cover to get the +1 bonus. Note, this means that if you take casualties from models that are out of the cover to the extent that the unit becomes wholly in cover, you will gain the +1 to your save for any further casualties.

Now units that charge strike first, even if they were previously lower initiative or had rules such as Unwieldy. This makes units such as Terminators with Power Fists or Thunder Hammers a fearsome prospect in combat.

The rules for model placement and pile in for tying up or engaging new enemy targets seems to add more complexity to the rules for combat, so it will be interesting to see how these play out.

Another big change is that Grenades can no longer be used in combat in most cases. This means it will be slightly tougher to take out enemy vehicles or monstrous creatures in assault. However, now you are no longer forced to stay in combat with such units, you can simply fall back and try and take them out with your firepower instead.

Morale Phase
I like it. Simple and easy to understand, plus you only have to test once a turn. It does make keeping track of casualties inflicted throughout the turn more important though.

Transport Vehicles
You can now assault out of any vehicle! The caveat is that you have to disembark before a vehicle moves, so no more zooming across the table in a transport and launching an assault on the same turn.

Vehicles are now able to fire overwatch, but a unit inside an open-topped vehicle can no longer fire overwatch as well (unless they have a rule allowing them to do so).

A Note on Re-rolls and Modifiers
There is one change in 8th edition that may take some getting used to and may cause a few arguments among players to start with. That is that re-rolls occur before the application of any modifiers.

I don't know about you, but in 7th edition (and every other edition for that matter), I applied modifiers before re-rolls. For example, if I had a -1 to hit when firing with my Space Marine, I would roll my dice and any result that was a 4 or more was a hit. If I had re-rolls, I roll of a 1-3 would be re-rolled.

This may not be the best example, but there are other situations where it does become important.

For example, Ravenwing Black Knights can overcharge their Plasma Talons. If they do so, any roll of a 1 to hit causes a mortal wound on the unit. As they are assault weapons, I can choose to advance and fire them at -1 to hit. Based on the way I played previously, I would say that my Black Knights hit on a 4+ and any roll of a 1 resulted in an "overheat".
Now, however, as the penalty is applied to the dice rolls directly, I will now overheat on a roll of a 1 or 2 to hit (as the roll of a 2 becomes a 1 and causes an overheat wound).

Similarly, if your unit has a special ability that triggers on a 6 to hit, you can never have this ability trigger if you are at -1 to hit, as the highest you can roll is a 5 in this case.

I think this will cause a few misunderstandings and arguments initially until everyone starts to play in the same way. It will certainly take some getting used to for me.

Overall
I am a big fan of the core rules for 8th edition, at least on paper. I can't wait to actually try them out with my armies and see how they perform on the tabletop.

What about you, what new rules are you excited about, or what rules would you like to see return to the game?
Posted by Mike (St Andrews Wargaming) at 09:00