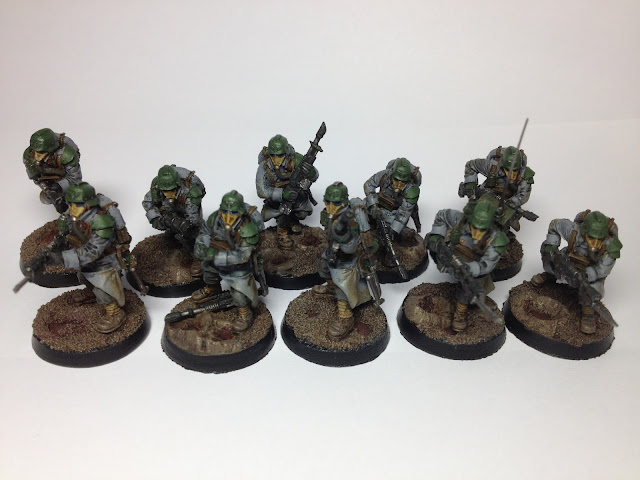 I think that I first came across Dave's blog during the recent Squaduary hobby challenge. Dave had also committed to paint up a squad of Deathwatch Veterans, so it was immediately one to watch! He did a fantastic job putting together his squad, with great weekly update posts to show off a brilliant final squad. 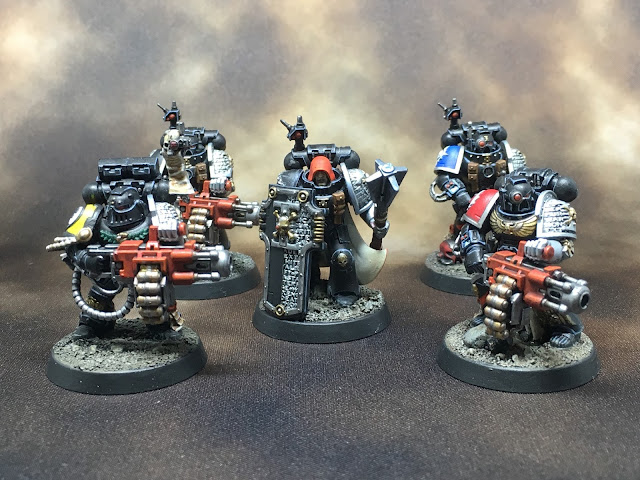 I think this is what brought my own Blog to Dave's attention. He has been a regular commenter since on my Deathwatch battle reports and hobby progress.

Dave also took part in the Dreadtober challenge last year, where he completed a Deathwatch Dreadnought to add to his burgeoning force. 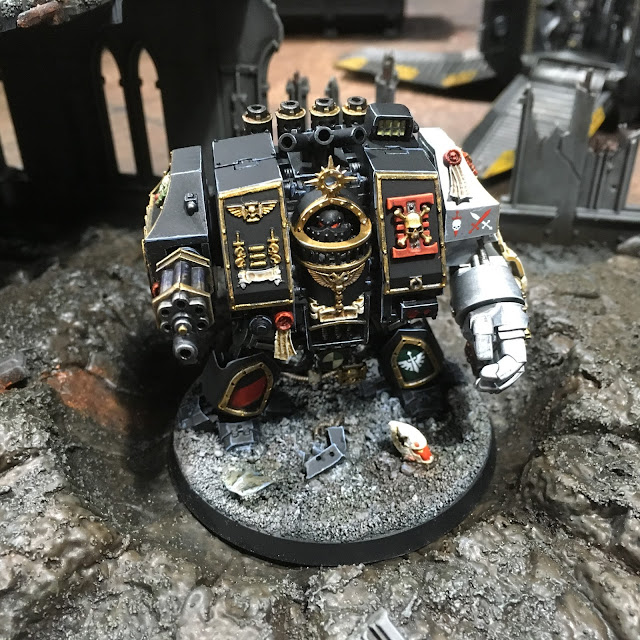 More recently, he has been working on a stack of terrain and some fantastic objective markers for his games, as well as making a start on some Custodes.

On the recent Old Stuff Day post, I showcased some of my existing 2nd edition card terrain that I have collected over the years. In the post, I lamented the elusive Imperial Bastion that had so far escaped my grasp. Shortly afterwards, Dave got in touch and offered to send me the Bastions and a bunch of other card terrain as well! His amazing generosity was very much appreciated!

Here are Dave's answers to my questions.


I can only speculate as to my true age at the time, but I recall my entry into gaming when my Dad brought home a D&D Basic boxed set (the edition with dice, not the original chit/counter set). I must have been in Junior High at the time in the early 80’s. It was D&D that introduced me to figure painting and I still have my collection of metal figures from those days. The game really needed the visuals, in my mind at the time. This led well beyond modelling to a full-fledged LARPing career, but that is perhaps a story for another time. Once I had massed a collection of fantasy figures, I wanted more rules for gaming with me. This led to Warhammer (I played Dwarves and last dabbled in Undead), BattleTech and ultimately to Warhammer 40K. While I enjoyed the early days of Warhammer, I found the number of models and mass unit movement tedious compared to the small unit tactics and smaller model count in 40K. I didn’t what to paint and game the lives of 40 spearmen; I wanted to paint and live the heroics of fighting champions!


Time has erased any record of my very first figure purchase, but it was most likely this box of Grenadier D&D figures: 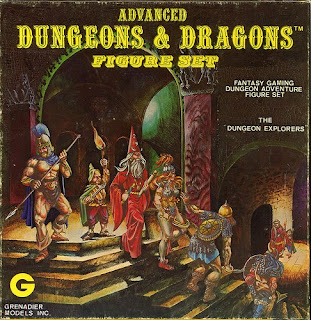 I owned them all at one point or another and still have most, if not all the original figures. I really got into the dragons in High School and have a decent collection of Grenadier dragons as well to this day. I assembled this intrepid party from among the collection…

My first 40K model kit was most likely the Space Ork Raiders. 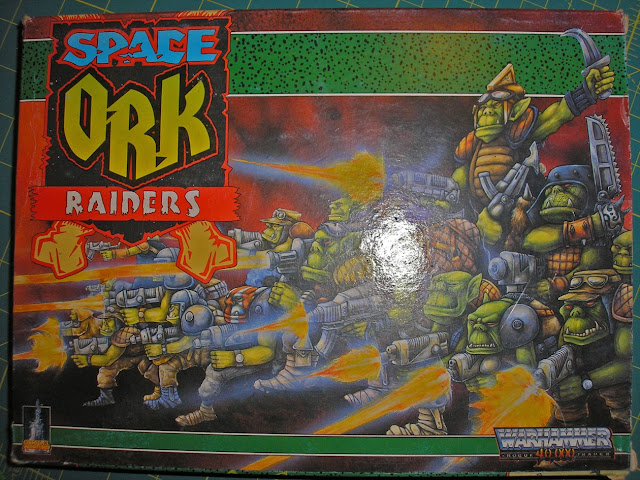 
Painting and Modelling has always been what I enjoy most, which I find ironic given that it was the games themselves and the search for table top battle rules that drove me to collect, model, and paint. Story is a close second though, and admittedly my true passion with Warhammer 40k. There is simply nothing to compare with the scope of the Warhammer 40k universe. 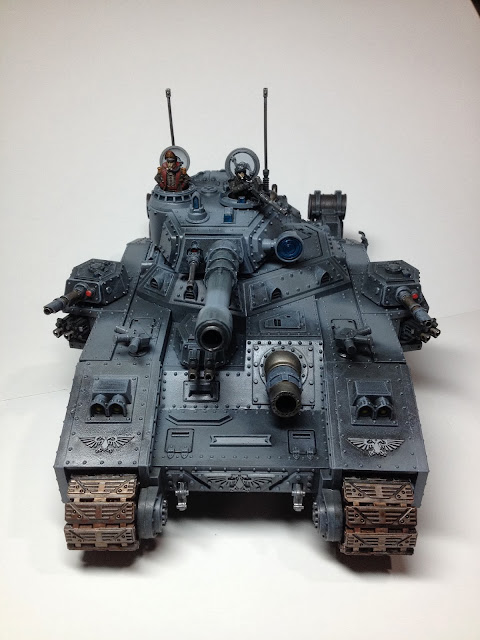 
Here I must diverge into a discussion of Live Action Roleplaying. I was a dedicated LARPer for a good 20 years, starting back in 1989 with a game/group known as New England Roleplaying Organization (NERO). While totally off the track of miniature war gaming, it is definitely LARPing that defined me as a gamer for many years. The experience of being part of an effective team “fighting” together was a pure pleasure that I will forever look back fondly on. In hindsight, I suspect a military career might have been very satisfying for me for that reason, though I never took that route. 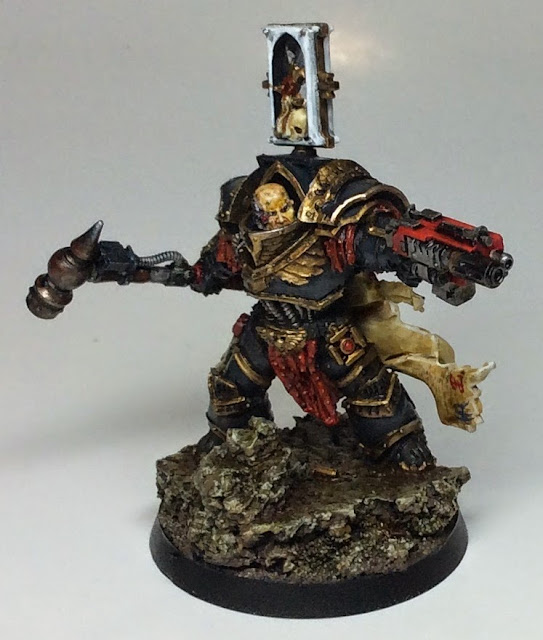 
Deathwatch were last on the table for painting. I am actively pursuing new terrain projects using the cities of death buildings, the Munitorum containers, and pretty much all of the bunker, defence lines, etc. models. I hope to use my experience painting the black armour of the Deathwatch to hone skills needed to paint a force of pre-heresy 1st Legion for 30K. 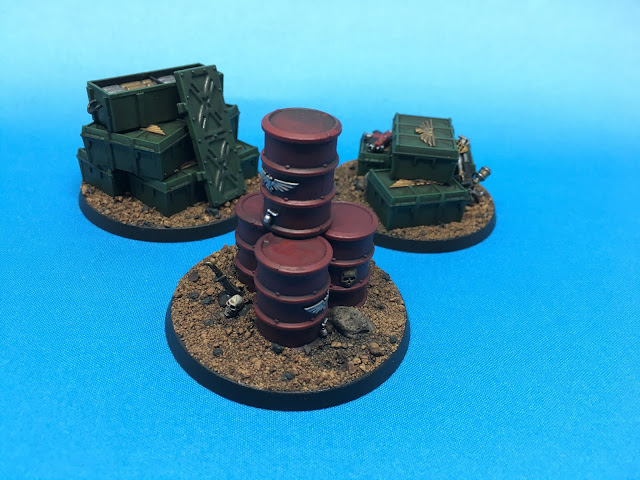 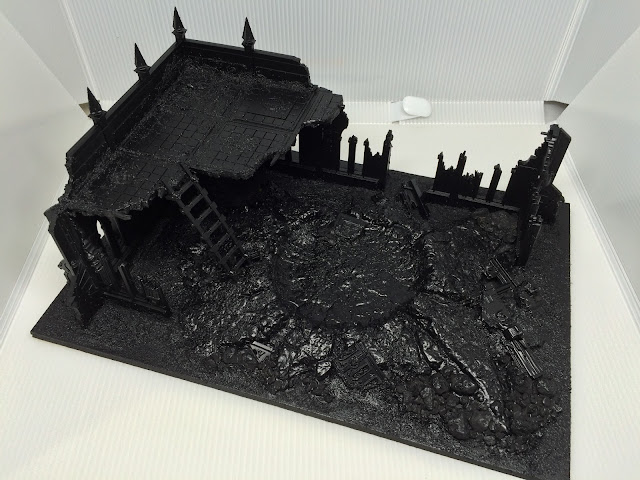 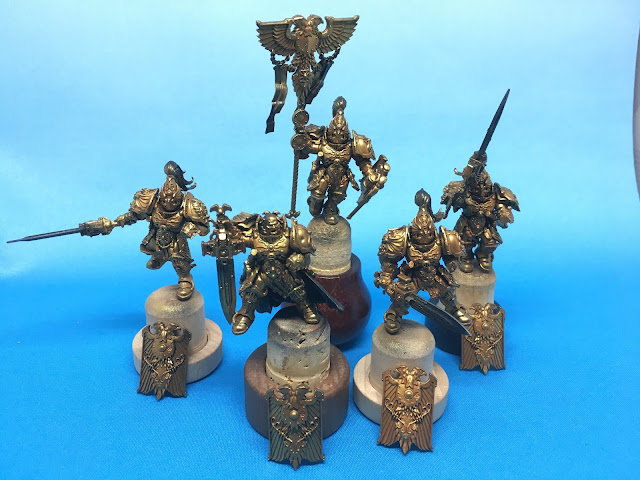 
I’m a software architect in the field of computer security. Work and fatherhood take up the majority of my time, but I enjoy billiards, climbing, hiking, and snowshoeing when the life and the hobby permit. 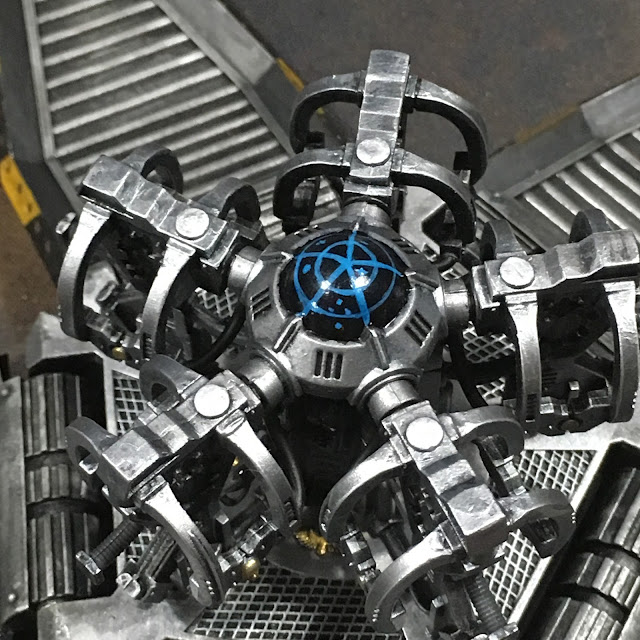 
If you can’t get enough of the hobby and like to explore the random processes of fellow gamers, come on by for inspiration and a raw look at modelling the 41st millennia.


That would be my post on Inquisitor Hadrian Russ, from the first painting competition I entered. The competition was hosted by Mengel Miniatures, and the model won the people’s choice vote. For this post, I really tried to capture my process and put a lot of time into practicing my model photography. This was the first time, for example, that I tried photographing with a photo backdrop.


OK…here it is…Gets Hot! What?! With all the effective ways to thoroughly obliterate the enemies of the 41st millennium, why is ANYONE still carrying a plasma weapon?? As a loyal fan of the Dark Angels, who are said to have a particular affinity for plasma weapons, I am particularly incensed here. How did they ever survive to the 41st millennium without dying out over time to plasma casualties?
If my games were ever any indicator, any marine cursed with such a weapon would be long ago vaporized. If I were to change this rule (and I do love the idea of quirks in long forgotten technology), I would apply it to rapid fire only (as a sign of seriously overcharging the weapon), and remove it all together from vehicles. Seriously…what armed force would risk a battle tank to a weapon as likely to fry the crew as the enemy? Ok, yes, Orks would, but we’re talking about the Imperium of Man here!

The Imperium, Emperor guide us, can build and control a magma cannon, but not tame plasma? We have weapons that crack worlds (but not their warships) for crying out loud! Perhaps for vehicles and the heavy variant I’d use two profiles, one normal and one overcharged that could deal more damage, but with increased risk for the unwary. The mechanic of increased risk for reward is great! Heroic moment or embarrassing defeat? Do you feel lucky? When it’s a calculated choice, I find it much more fun than when it is a simple quirk of the dice in the normal progress of things. 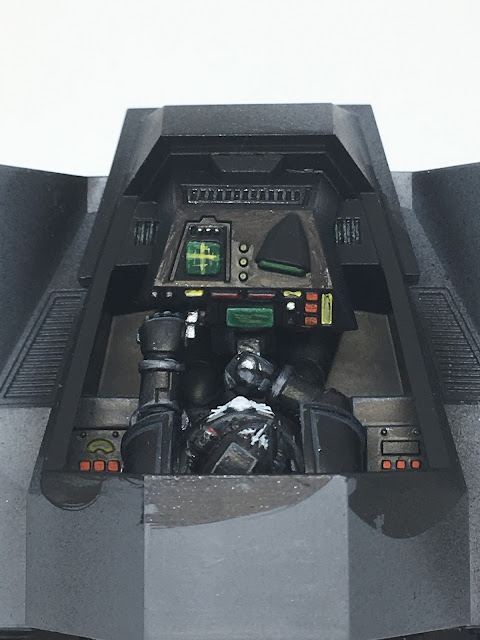 
The Unforgiven will always be my one true love, which I find ironic given that I have spent the least amount of time painting them! That said, I own a large force modelled and sprayed DA green and have been collecting them for many years. The Death Korps of Krieg captured my attention (and inspired my blog) and really deserve more than they get…and of course Grey Knights and the Deathwatch…and those Red Hunters sure look spiffy…well, and Imperial Knights are just fantastic…yeah, all those.


I wouldn’t say secret, but I don’t think I’ve ever been loud about anything. I’m quiet by nature so I’d definitely admit to being an understated gamer. I do think it is important to be true to one’s self. Never hide or deny yourself as a war gamer! 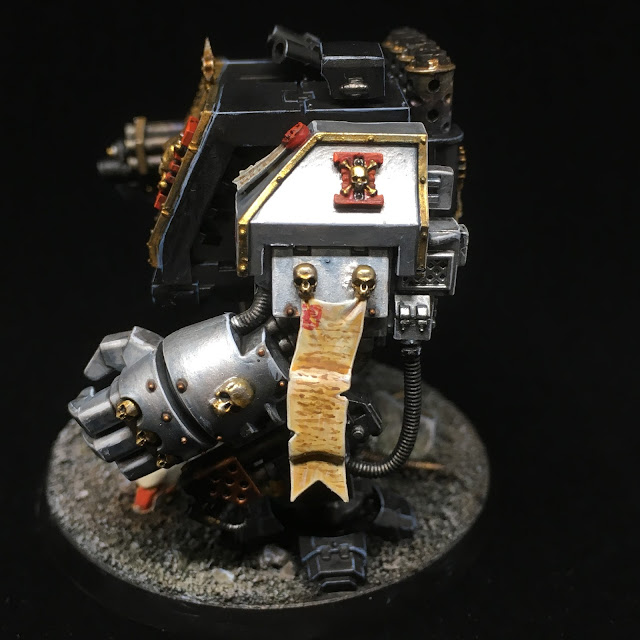 
Any tips or cheats that may have once been my own have been systematically replaced by the even better tips and cheats of other hobbyists out there. For the last two or so years, I have voraciously consumed every blog article, YouTube video, google hangout and twitch stream I could get my hands on. Seriously. There is SO much out there now.

I will say, to the reluctant, don’t be afraid to build your own bases! I got into basing with cork and other materials in a big way last year and have never looked back. I still pick up some of the great resin cast bases out there, but some of my favourite personal projects have been born on my own custom bases. It’s so easy and satisfying once you break through and give it a go! 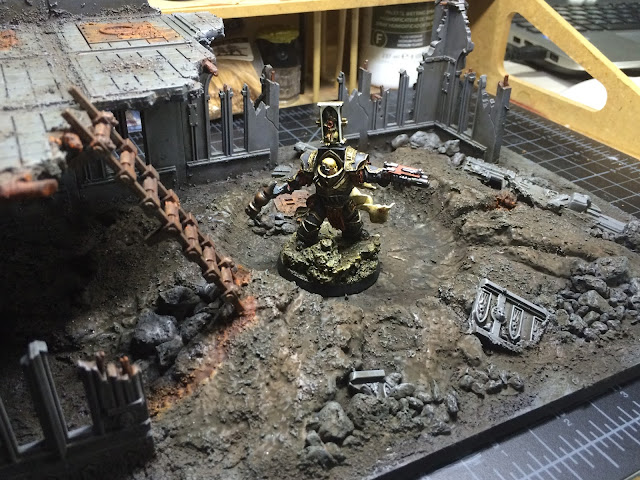 
Casual for sure. The group of folks I enjoy 40K with have always been most about the fluff and flavour. I haven’t had the time to keep up with the rules and learn a force or the game well enough to participate in tourneys. Given the time, I’d put a tourney on the bucket list though, just for the experience.


Nintendo? Never had the pleasure of either growing up, but I feel a nostalgic pull towards Nintendo for no logical cause that I can put a finger on. 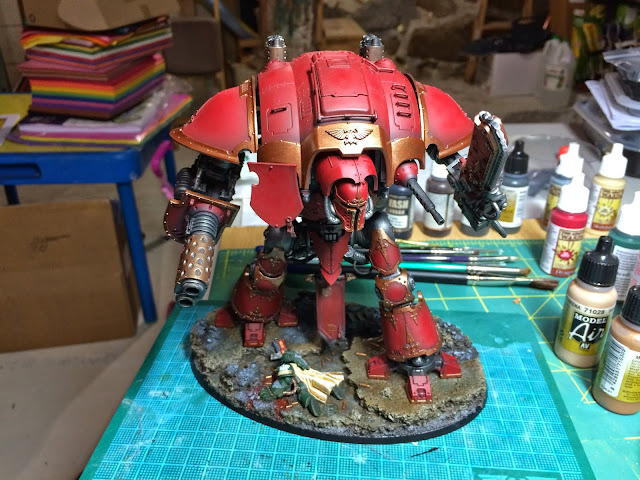 
Playstation! Still rocking a PS3 from the lost Age Before Children…in fact, we just broke out the Singstar mics so my five year old could rock her best rendition of Let It Go from Frozen.


McDonalds, back in the day. Happy to admit I haven’t set foot in either for well over a decade. 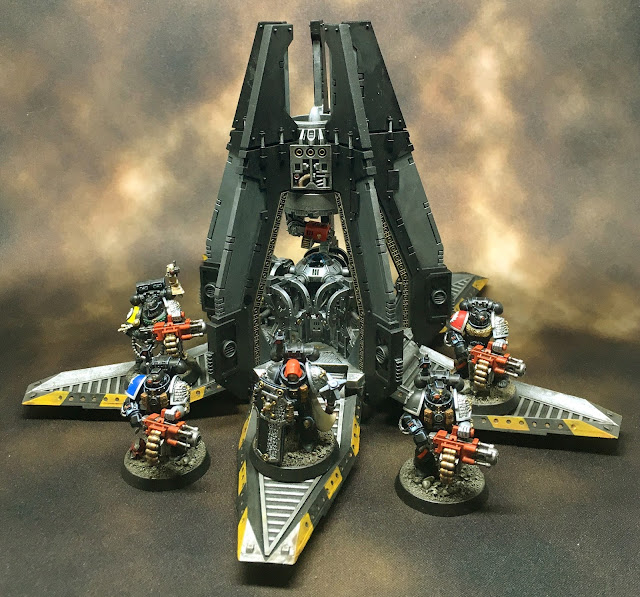 
Coke all the way…

Thanks to Dave for taking the time to answer my questions. Be sure to check out and follow 262nd Death Korps of Kreig.