Welcome to the first battle overview post in the ongoing Medusa IV campaign. Some of the players in the campaign have been kind enough to send me photos of their games and a quick overview of the action taking place in their battle for their territories.

Sons of Hous vs Eldar
First up, Josh's Sons of Horus, led by Loken, took on Armel's Saim Hann Eldar in a battle over a ruined cityscape. The two armies sized one another up and made advances into the ruins. 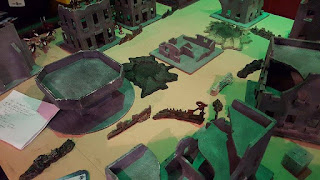 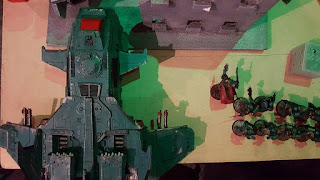 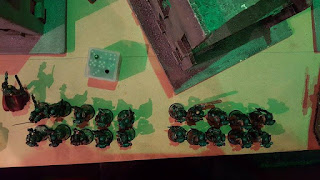 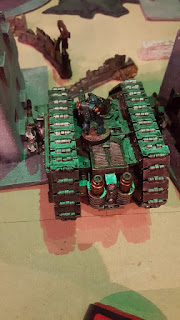 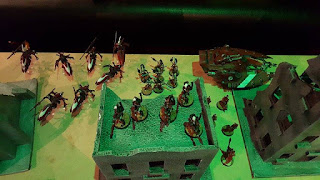 A major blow was struck by the Eldar psyker as their psychic shriek went off and rolled an amazing triple 6 for the roll, slaying 8 of the marines. 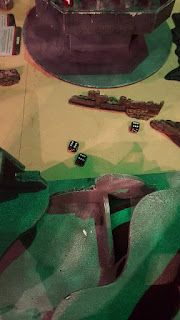 Fortunes changed when the Storm Eagle arrived, slaying most of the banshees and the jetbikes. The Wave Serpent was targeted and brought down to one hull point, but could not be finished off. 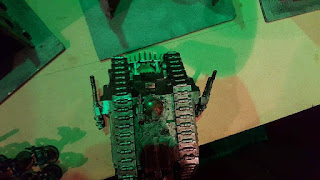 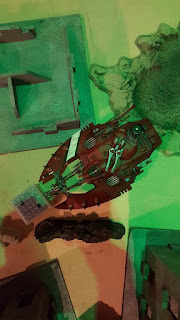 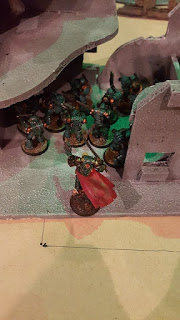 In the following turns, more marines were slaughtered. The Eldar assaulted the Land Raider, but were unable to destroy the tank. The game ended with a draw, neither side capturing the territory.

Orks vs Dark Eldar
The second game comes from Seb's Orks taking on James' Dark Eldar in a 1000 pts clash over the Relic.

Thanks to Seb for the report and the commentary below (a very Ork-ish view point of the battle):

Orks start Turn 1 moving up the board. Almost no DE in sight for shooting! Sneaky gits… 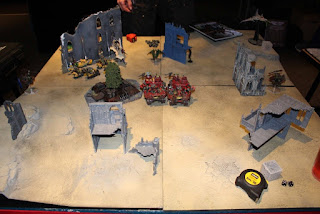 The warbikers took a heavy beating by massed Kabalite’s shooting from the Raider. In the end, the remaining Ork warlord, the Painboy and a Power claw Nob opted to charge the Raider with the Dark Eldar Archon inside and exploded it after the ramming attacks of the Battle Wagons weren’t doing the job of blowing the shit up. Inevitably, the Warboss and bikers were slain by shooting from a Raider coming from behind the building and falling in their backs. Both Battle Wagons were destroyed by haywire attacks coming from the funnily winged guys in the ruins and the Venom, and by shooting from the Razorwing. 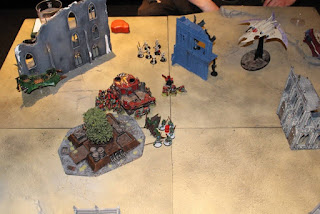 The boyz from the wrecked Battlewagon attacked the remaining unit of Kabalites and the DE Archon. 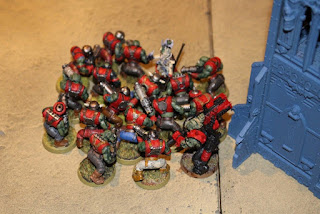 Stunningly, the warlord managed to safe all the inflicted wounds in CC with his DE super annoying 2++ special armour. The only roll of 1 was safed by Feel no Pain. Bastard! 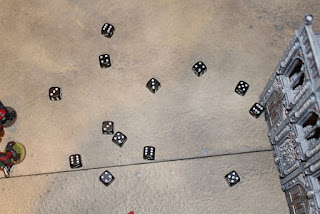 The orks from the exploded Battlewagon attack the funnily winged Dark Eldar holding the Relic. They died. Cannot remember how exactly .. Finally, I managed to finish of the DE Warlord. 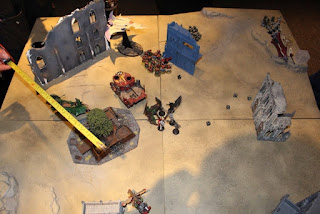 My Orks get punished by the Razorwing. 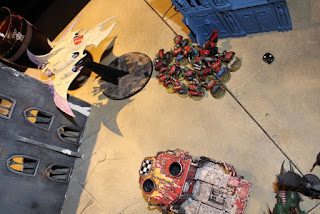 The survivors of the sky attack were put into line by their Nob and took aim on the Funny Wings, which were still sitting like breeding hens on the Relic. 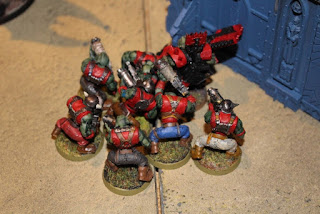 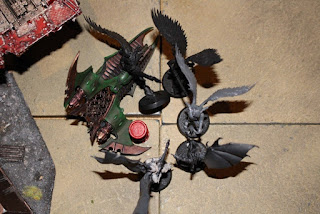 The remaining Ork Shoota Boy Unit got shoot at from the Raider and the Wingy Thingies. The Raider got immobilized by the Deff Kopta, which also was then shot down by the Raider. Still the Orks killed all the Hens and got the Relic. 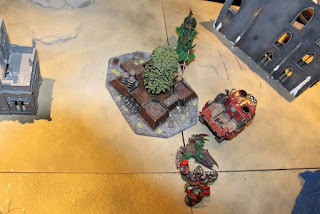 Here he is .. last man standing .. but killed by these sneaky DE bombs which attack your mind ..
Since it is common sense that Ork and mind doesn’t compare .. there was no Ork anymore. 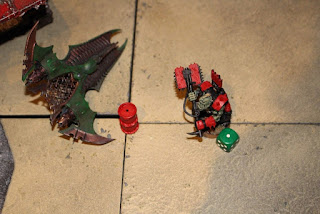 Dark Eldar got one immobilized Raider with 10 Kabalites left.

A thrilling battle for the Orks and Dark Eldar, I was there to see the final Ork fall on the Relic (He was so close to surviving and winning the game!).

Thanks to Josh and Seb for taking the photos and putting together the game descriptions for me, much appreciated! Tomorrow I will be posting all the results of turn 1, battle phase 1 in the campaign and the moves for the second battle phase that is currently underway.
﻿
Posted by Mike (St Andrews Wargaming) at 09:00