I thought I would take a look back at the year of blogging in 2019 for St Andrews Wargaming, and seeing what the new year has in store.

Blogging
My blogging content has been down significantly in 2019. I posted 160 articles on the blog in 2018, compared to only 81 in 2019, a reduction of about 50%. These articles have been exclusively hobby updates, battle reports and codex reviews.

There are several reasons for this. One of the main ones is that I think blog interaction and views appear to be down across the board. I think a lot more readers are migrating to social media and Youtube channels to get their hobby content. This has left a lot of bloggers behind and I think my average article views are well down compared to a couple of years ago.

I think another issue is the way that GW have changed their release schedules and release practices. In previous years, Codex Reviews were a big draw to the blog, as people wanted to read about the new releases and new rules and units for an army. For much of 8th edition, GW have started giving advance copies of the codices to the bigger Youtube channels and websites. As a result, most people are getting their information about the new releases from those sources, weeks before anyone else can supply these highly sought after articles.

Another issue for me has been the increased release schedule of the new books. We have gone from one to two codices a year, to almost one a month with 8th edition. It can be hard to keep up do date with the reviews for just the armies that I have. For most of my reviews, I have focused on the special rules, warlord traits, psychic powers and stratagems, rather than reviewing each unit in turn. I have saved the more indepth reviews for my Frontline Gaming articles.

As I will discuss below, the battle reports have also been a time-consuming part of blogging. This has limited the number of posts I can put out.

Changes in my social life have also limited the amount of time I can spend on the blog. I started a new relationship this year and have taken up some hobbies that have cut down the time I can spend on blogging each week, which has helped contribute to the lower output this year.

Another aspect that I need to work on for the new year is interacting with other blogs. Potentially one of the reasons for the reduced readership and comments on the blog has been that I have also dropped off in reading blogs and commenting on other blogs. As I have said previously, interacting with other bloggers is a great way to keep the community going and get more people interested in your own blog. I've been trying to start this up again more recently, and hope to improve on this in the new year.

Many of the people I starting blogging around the same time as, and many of the blogs I used to follow on a regular basis have either stopped altogether or seen a dramatic reduction in their posts; Confessions of a 40k addict, The Burning Eye, From the Horus Heresy to Infinity and Beyond, From the Fang.

A big shout out to some recent bloggers who have taken up the mantle, producing great content most weeks; Stylus from the Woffboot Chronicles and Redtoof from Redtoof's mostly 40k blog.

I also want to call out some blogs that have continued to go from strength to strength; Old School Gaming, WeeMen and Cascadian Grimdark. If there are any other blogs you think I should be following, please leave a comment and let me know.

Many thanks to all of those that continue to read and comment on the blog on a regular basis, and for helping to keep my motivation up in the past year.

Battle Reports
I think that one of the big draws of the blog has to be my detailed 40k battle reports that I post.

Since the beginning of 8th edition, it has been more difficult to do these. The reduced points cost of most units has meant that armies have gotten bigger than they were in 7th edition, as well as increased rules for psychic power and stratagems. All these combining factors means that it takes longer to write up each game for 8th edition.

Previously, I was able to get at least 1 battle report out per week, playing a game at the club and taking 1-2 week nights to write it up. Now, it can take at least 3-4 week nights to get a game written up, and it can take me several weeks to get tournament games written up for the blog. I still enjoy doing them, but each night spent writing up a game means I cannot do any hobby work, such as painting or making new terrain.

I have also seen a steady decline in interaction with the battle reports, as I think more people are moving to Youtube for their battle reports, to watch or listen to as they are painting. You can't really read a written battle report while doing something else.

For example, my last Youtube battle report got around 1300 views and 14 comments. Pretty small fry compared to most of the channels out there. In comparison, a recent tournament written battle report got 317 views and 2 comments, and that has been the most popular report for a while. I just don't think there is much of a readership for these types of reports any more. In the last year, I still manged 25 battle reports (mostly tournament games), so still almost one every two weeks.

Going forward, I am probably going to limit myself to writing up tournament battle reports, rather than trying to do one each week. I simply don't think it is worth the effort, when I can be spending the time on other hobby aspects.

Hobby Progress
This year, I have been mostly focusing on my Genestealer Cults and Dark Angels Primaris army.

The release of the Genestealer Cults codex brought a bunch of new units and support characters for me to paint up, and I spent the first half of the year getting through some new purchases to add to the army. 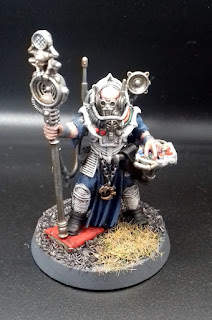 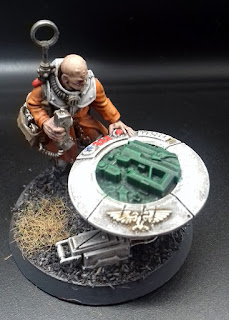 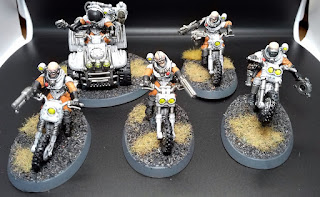 The later half of the year has seen my focus shift towards my Dark Angels Primaris army. I have been trying to build up an all Primaris force for my Dark Angels to test out the new units. A bunch of great new Primaris releases this year has made this more viable than in previous years. Given the new Marine Codex, I kind of wish I had just painted them a generic chapter, but hopefully the new Dark Angels rules will give me something to work with. 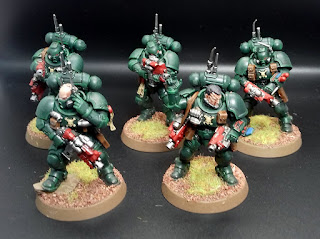 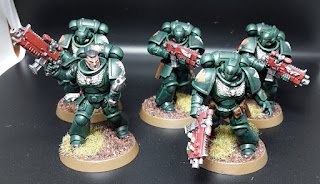 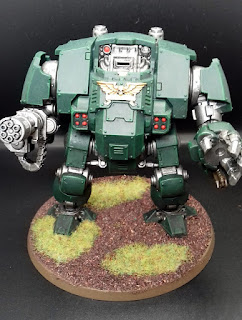 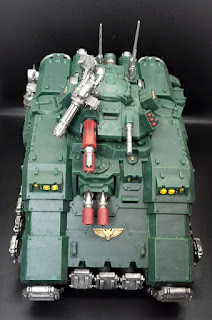 With my hobby work, I have continued to try and push my skills with the two armies, and I think both armies are looking pretty good, if I do say so myself!

I haven't done much scenery work this year, if any. One of the reasons for this was the limited space at my old flat. I didn't really have room to start or store too many big projects. This is one aspect of the game that I really enjoy, so might make more effort in the new year to try and get more terrain  built and painted.

Tournaments
I actually managed to attend quite a few tournaments this year. Fortunately, there have been a number of great local events, as well as events in the north for me to attend this year.

Towards the end of last year and the start of this year, I was getting really demoralised with going to tournament in 8th edition. I seemed to be constantly going up against Ynnari and Imperial Knights, and was having some of the most un-fun games and miserable tournament experiences that I have ever had with 40k.

Fortunately, both Knights and Ynarri were significantly reigned in part way through the year, to the point where these armies have pretty much disappeared from competitive play. I also started attending some events with more restrictive army selection processes and ones that included more maelstrom games.

I attended the Dark Artisan Open, and ended up going 3-1-1 with my Deathwatch, which I was very happy about. I then took my Deathwatch to Rapid Strike, a maelstrom only tournament, and managed to get first place with them. I then took my White Scars to Warfare 2019 and took second place with them. These have been my best tournament results for a long time and I look forward to see what the White Scars can do.

I've already got a number of tournaments lined up for the start of next year. I'll be travelling to the North East Open in Durham in February. I attended this event last year, and the event was fantastic, despite some poor games and my poor performance at it, so will be looking forward to going back again.

Youtube
I started my own Youtube channel a while back, but made more of a focus on getting regular content out towards the end of the year.

This is one area where I am seeing strong growth and interaction with the community. I am hoping to continue this in the new year. I recently purchased a gimbal, a device for steadying the camera as I film, which should hopefully improved the quality of the videos as I go forward.

I am currently sitting on nearly 600 subscribers and hope to push this to over 1000 in the coming year.

Overall
In all honesty, I did lose a lot of motivation for the blog in this year. Personal circumstances changed for me, and I did lose a bit of my joy from blogging, while continuing to love playing and talking about 40k.

I think the last few months have rekindled some of the enjoyment I get out of blogging, so hope to make a push for more content in the new year.

I hope you have enjoyed my thoughts on the past year and what is to come. If there is anything you would like to see on the blog, please let me know below.

I am also always on the lookout for guest articles or regular contributors to the blog, so please let me know if you are interested.
Posted by Mike (St Andrews Wargaming) at 09:00