Another day, another big set of reveals for the new Space Marine codex. Today, the Warhammer Community page released a whole host of information on new units in the codex. Here are some thoughts on what they previewed. 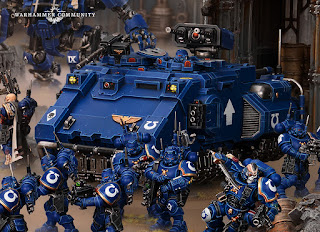 Incursor Squad
A new unit for the Space Marines, these seem to be a new addition to the Vanguard forces that have already been released. The squad comes armed with the Occulus Bolt Rifle. Based on the existing profile for the Master-Crafted Occulus Bolt Rifle, this is most likely 24", Rapid Fire 1, S4, AP0, 1 damage, and ignores cover. This is similar to a standard Boltgun, so will be good against most standard infantry.
The squad do not suffer any penalties to hit, so will be able to lay down a lot of accurate firepower. This is a nice bonus against a range of squads, but as GW appear to be scaling back the ability to get -1 to hit on units, you may not see as much use out of this as you might currently. 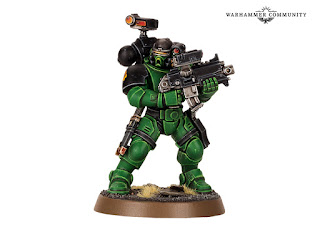 They also come with Paired Combat Blades. This gives you an extra hit on each roll of a 6 to hit in combat. With 3 attacks on the charge (most likely), you should get an extra hit for every 2 models that attack. I would prefer a combat blade for the extra attack always, but you don't tend to get these on firepower squads anyway.

They also have haywire Mines, allowing you to cause D3 mortal wounds to enemy units that move in range (or D3+1 if they are a vehicle). This allows you to lay down some booby traps to hurt the enemy if they move into range. This is going to be a serious prospect for small units, such as other Marines, but will probably not bother large units too much.

I think this sounds like a decent unit, but not essential at the moment. The ability to shut down enemy reserves with the Infiltrators seems like more of a bonus. Useful if you are facing a lot of armies with negative modifiers to hit. Maybe the full codex will give additional rules or stratagems to make these guys more useful.

Impulsor
The Primaris Marines finally get a light transport to get around the tabletop easier. No idea on the stats, but I would figure it would be similar to a Rhino chassis with 10 or 12 wounds.

The transport capacity is only 6, which is a shame. I would like to have seen a cheaper option for transporting 10 Primaris Marines, rather than the Repulsor. It makes up for this with the Assault Vehicle rule. This allows you to disembark after the vehicle has moved (but not advanced), but the unit cannot charge. This will be great for getting units into rapid fire range faster and in relative safety.

It can take a number of upgrades, but the big one for me is a 4+ invulnerable save. This is great, giving the Marines a mobile transport with fly and some good durability with an invulnerable. You can also use it to do an Orbital Bombardment. This is similar to the stratagem of the same name, but will not cost you 3CP!

I can see the Impulsor being a useful addition to the army. It will give the Primaris more mobility, something they lack at the moment. The price will be the big sticking point as to whether it is worth taking one (or more) in the army.

Invictor Tactical Warsuit
A Redemptor Dreadnought that can deploy from reserves. This is a solid boost, as one of the big problems of the Dreadnought is getting it into range to get it into combat in the first place.
This has some decent firepower as well. A 12" 2D6 shot Heavy Flamer is a solid weapon for this, allowing you to fire from reserve and do some real damage if you can roll high enough. 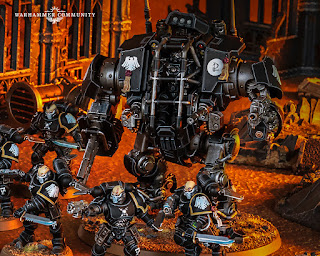 It also comes with a Heavy 6, S7, AP-1, 2 damage Autocannon. This is a great weapon for damaging vehicles or other Primaris marine units.

This seems like a pretty solid Dreadnought that has a lot of bonuses over the current version.

Infiltrators
The Infiltrator squad seems to be getting some additional rules in the new codex.

Add in their existing special rules and I think this squad is still a solid choice for the army.

Eliminator Squad
These guys have some solid sniper rules for taking on enemy characters in their existing form. In addition, they get some great anti-tank weaponry. 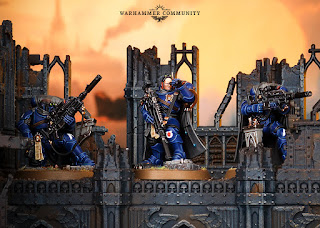 The Las Fusil seems like a great weapon for the unit, giving them a S8, AP-3 and 3 damage weapon for taking on enemy vehicles. The range of 36" is a little shorter than most anti-tank weapons, but these guys can deploy out of your deployment zone.

I like the 3 damage. Variable damage rolls can be a pain, as you always seem to roll low when you need it. A unit of 3 can do a maximum of 9 damage, so you are not going to be killing most vehicles in one round of fire, but should be able to seriously harm them for the rest of your army to finish off.

The Sergeant can now forgo shooting to give the rest of the squad +1 to hit and to wound. This will allow you to hit and wound most vehicles on a 2+. However, if the squad is still limited to only 3 models, this may not always be the best choice, as you will now be limited to a maximum of 6 wounds per round of shooting. Will be useful for ensuring that you finish off a damaged vehicle.

The Covering Fire rule is also interesting. It allows you to move after firing overwatch with the Sergeant. This will put an extra 6" on any charge that is targeting the squad, greatly increase the odds that it will fail. However, I see the role of the Eliminators as backfield fire support, so you may not get to use it all too often.

Combat Doctrines
These are back and provide some very strong buffs to your army.

The Devastator Doctrine is great for your Heavy Weapons for punishing the enemy armour on turn 1. Your Lascannons will be AP-4, denying an armour save to most enemy vehicles. The Missile Launcher goes up to AP-3, which is great. It is so annoying when your opponent rolls a 5+ save against the Missile Launcher, so this will reduce the number of saves they can make. It will even be useful for Heavy Bolters, making them AP-2 and able to go through armour more easily.

The Tactical Doctrine is a great boost for most units in the army. Normal Marines will go up to AP-1 on their Bolters, while most Primaris units will be at AP-2 on their Bolt Rifles. This is a huge damage boost to much of the army. I am looking forward to running a number of White Scars Biker units with AP-1 Bolters and a lot of shots at full range.

I see the Assault Doctrine as being of less use at the moment. However, with the new Shock Assault rule putting most models up an extra attack, this could be very useful. I was thinking about a unit of 10 Vanguard Veterans with dual Chainswords that I have for my White Scars. With the new rules, the squad will have 50 attacks on the charge. With the Assault Doctrine, they will now be AP-1, greatly improving their damage output.

In all honesty, I can't see many players moving off the Tactical Doctrine too often. Getting AP-1 on your Rapid Fire and Assault Weapons is pretty good for much of the game. I'm not sure I would trade that in for getting Marines into combat.

These seem like some incredibly strong bonuses to the Marines. I am getting more excited for this codex with each new release.
Posted by Mike (St Andrews Wargaming) at 20:26