The updated Chapter Tactics for the Space Marines were revealed on Warhammer Community yesterday. I had a look at the new traits for the Marines and am very excited by what this might mean for the codex. 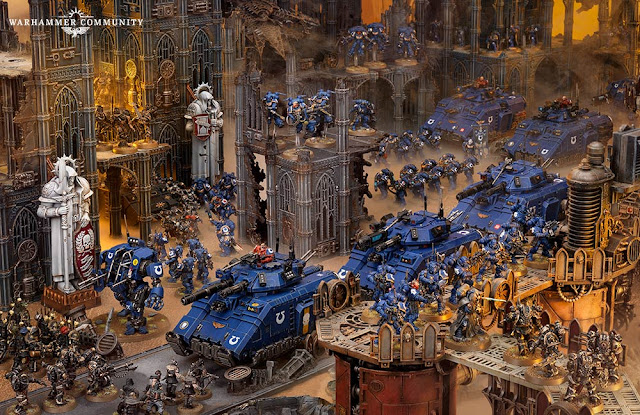 First off, it appears that vehicles will now be getting access to the Chapter Tactics as well from now on. This will be a nice boost for them, as most other armies' vehicles were getting access to their own version, so it's nice to see Marines brought up to date with this. This will give some of them a nice boost to their firepower and durability. 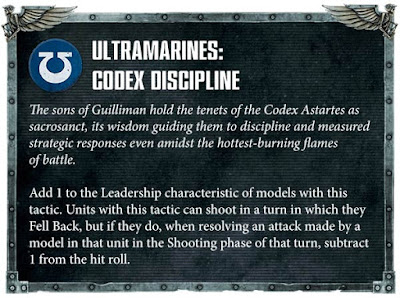 The Ultramarines Chapter Tactic was pretty much unchanged. As it was arguably one of the best in the old codex, this isn't too bad. What is a big change is that vehicles will now benefit from being able to fall back and still shoot. This is a big boost for many tough vehicles such as Predators or Land Raiders, as they will still be able to put out a decent level of firepower when falling back from combat. It will also be even harder to shut down their firepower, as you will need to surround them and stop them from falling back to block their firepower completely. 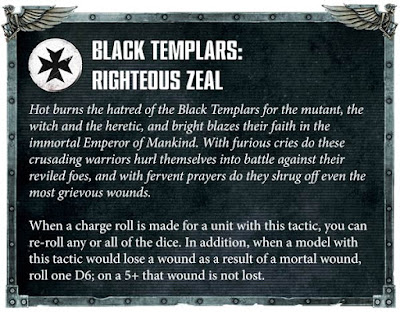 Black Templars also get some nice boosts from the new Chapter Tactics. The ability to re-roll one or both the dice from a charge is a big boost, as you will increase the odds of getting a successful charge off if you roll high on one die, but low on the other. A 5+ save against mortal wounds is also a nice bonus to the units, giving you some good defense against Smites and other mortal wound-causing psychic powers. 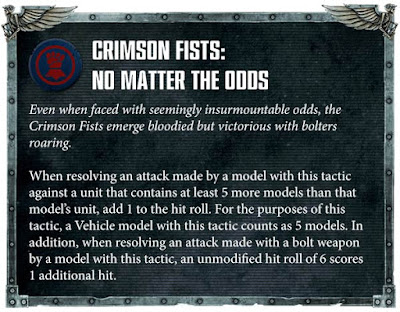 This seems like a solid Chapter Tactics as well. I see it as being useful against hordes, as most competitive units will consist of less than 10 models. Could come into effect more as you take casualties on a unit as well.
I can see this being useful for small Devastator squads, allowing them to hit on a 2+ with their heavy weapons against big squads of enemy models, though the likely target for most of their weaponry is single model vehicles or monsters. This could work out well for a unit of Devastators or Centurions with Heavy Bolters. Against large units, you will be hitting on a 2+, as well as getting an extra hit for each 6 to hit rolled.

Also useful when combined with Bolter Discipline, giving you more chances of getting additional hits. 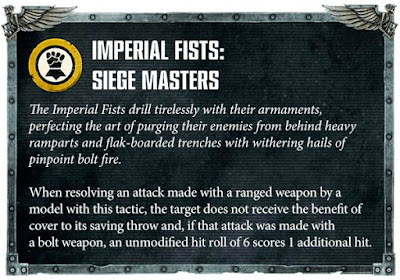 Ignores cover is nice, allowing you to potentially do more damage to enemy units in cover. The additional hits on a rolling a 6 to hit with Bolt Weapons is also a nice bonus, giving the chance to do more damage with your Bolter weaponry. I think the Crimson Fists version is stronger, but maybe there are other units or stratagems that will make the Imperial Fists more viable in the codex. 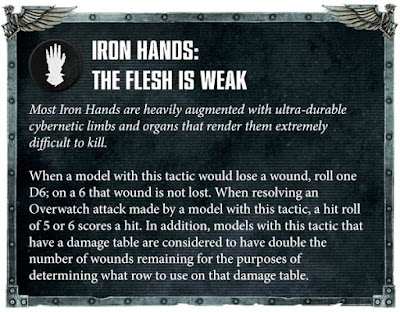 The army-wide 6+ save will also now apply to vehicles, giving you better odds of blocking a wound on these models. The overwatch on a 5+ is also a great boost for the Iron Hands, making charging a unit of Marines a tricky prospect, as well as making the vehicles more deadly.
Getting to ignore much of the damage table until you are seriously injured is also a very nice boost for the vehicles in the army, keeping them firing and moving at full effectiveness for much longer. 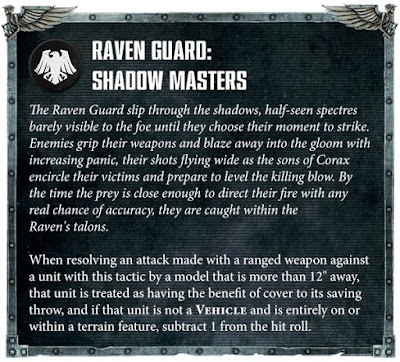 This is the only Chapter Tactic to see a decrease in power from the codex. Hopefully this is a sign that other such buffs are being reigned in to some degree for other codices (doesn't everyone hate -2 and -3 to hit Aeldari units?!?).
The benefit of cover if you are over 12" away is a nice boost for Marines, giving you a 2+ armour save against most basic weaponry. This also allows you to move around more, not having to hug the terrain to keep your units alive, allowing you to go after objectives. The fact you can also get -1 to hit when in cover is also a nice bonus for most units in the army, making Raven Guard in cover very tough to shift. 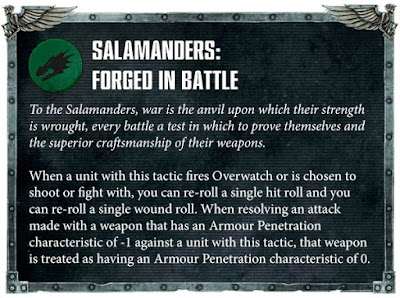 Another of the stronger Chapter Tactics from the original codex, and it has gotten better. Getting a re-roll to hit and to wound each turn with your shooting and melee attacks is a great bonus for the army, saving those CP on other stratagems. Applying to vehicles as well will boost their damage output with free re-rolls, making the most of their powerful weaponry.

In addition, the Salamanders get a nice defensive boost, maintaining a 3+ save against a range of AP-1 weaponry that they can face. When in cover, they will keep a 2+ armour save against Heavy Bolters and their like. 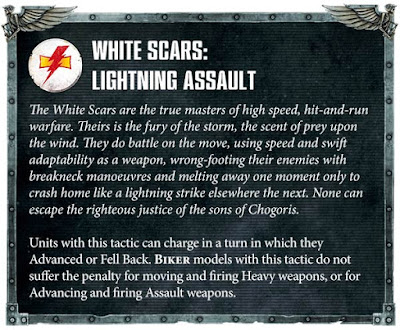 The one I am most excited about testing out thanks to my own White Scars army. The ability to fall back and still charge can be pretty powerful in the right circumstances. The ability to advance and still charge is also a big boost for the army, making them even more mobile. This works especially well with Bikers, who have a fixed advance roll, allowing you to know your exact threat range more easily (assuming they keep this in the new codex).

As a bonus, Bikers now can move and fire Heavy weapons without penalty and can advance and fire Assault weapons without penalty. This makes Attack Bikes a more viable option in the army, allowing you to move with them and still fire their Heavy Bolter or Multi-melta to full effect. I also see it as being useful for Meltagun Bikers, allowing you to move 20" and fire at full effect with the Meltagun. This gives you better odds of getting into Melta range to do more damage to enemy targets. With the Bolter Discipline rule, this gives Bikers some solid firepower, allowing you to fire double shots at full range on the move.

I would hope that the White Scars supplement gives a similar bonus to Landspeeders. It would be great to field these once more and not hinder their firepower on the move, really allowing the White Scars to play out to the best of their ability.

I'm looking forward to this codex coming out in the next few weeks. It'll hopefully allow me to get my White Scars back on the tabletop to do some damage. Now all I need to do is upgrade their bases from 25 mm..........
Posted by Mike (St Andrews Wargaming) at 10:29