July's White Dwarf saw some new rules for maelstrom of war released. These are a modification of the standard rules, allowing you to bring an element of deck building into your maelstrom games. This review will take a look at the new rules and see what they can add to your games of 40k. 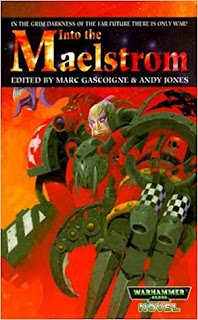 Anyone who follows the blog will be aware that I am a big fan of maelstrom missions. I think that they give any army a chance to compete in the game and reward tactical thinking in your games, as opposed to just "kill everything in your opponent's army". I was excited to see the new rules that were presented to see if they would improve the game further (thanks to Doug for making me aware of the new rules in White Dwarf!).

Schemes of War
Constructing Your Deck
When fighting a maelstrom of war mission, you must construct an objective deck, made up of 18 Tactical Objective cards. No more than one copy of each uniquely named Tactical Objective may be included in the deck.

The new rules means that you are playing with half of the maelstrom deck in your hand. This allows you to choose the optimal cards that your army can achieve during each game, better suiting your army composition and playstyle. You can only take one of each unique card, so this only really applies to "Secure Objective x" cards, as there are two of these in each deck. This stops you from loading up on securing objective cards, though you can still take the set of 6 Secure and Defend Objective cards to play the objective game.

Using Tactical Objectives
For a mission, you set up the battlefield and objectives as normal. This means you have to pick your deck before you know the mission or placement of objectives. This prevents you from stacking your hand with the cards corresponding to objectives in your own deployment zone. 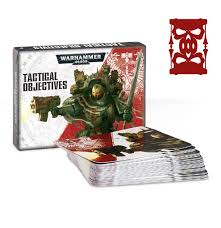 Using Your Objective Deck
This is where the biggest changes to the maelstrom mission come into play.

At the start of the first battle round, each player shuffles their objective deck and draws 5 cards. If either player is not happy with the initial cards they draw, they can choose to place them on the bottom of their Objective deck, in any order, and draw 4 new Tactical Objective cards.

At the end of the morale phase, if a card is impossible to achieve (e.g. you have Big Game Hunter and your opponent has no viable units left on the table), you can discard it.

Stratagems
Re-Prioritise (2CP)- Use this stratagem at the start of your turn. Discard up to two Tactical Objective cards in your hand and re-draw a card for each card that was discarded.

Tactical Foresight (1CP)- Use this stratagem at any point during the turn. You can look at the top three cards in your Objective deck and choose to put each back on either the top or bottom of the deck in any order. You can only use this stratagem once per turn.

Determined Push (1CP)- Use this stratagem at any point during the turn. Select up to three Tactical Objective cards from your discard pile and shuffle them back into your objective deck. You can only use this stratagem once per turn. 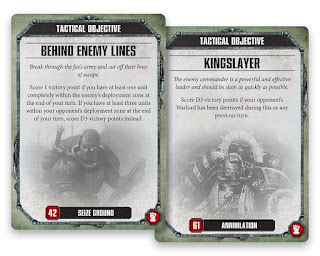 Review
These rules mark a big change for the way that maelstrom of war games will be fought.

The deck building aspect is a nice change, allowing you to select cards that will maximise the chances of scoring during the game, based on your army composition and tactics. You can load up on killing enemy units if you have a static gunline, or can go for the objective game and Behind Enemy Lines if you have a fast, mobile force.

The way you draw objective cards has also seen big changes. You now have a hand of 5 cards and can select which three you wish to try and achieve each turn. This allows you to maximise the chances of scoring each turn, giving you better odds of doing well in missions.

Players are also allowed to keep one card secret each turn. This is great for scoring those trickier to achieve cards, such as Area Denial or Defend Objective X, as your opponent won't know to focus on you stopping those missions if they cannot see the card. Armies with a stratagem allowing them to keep all their cards hidden until achieved will still see a big benefit to maelstrom games, but other players can now get in on some of the action.

The ability to discard any card in the morale phase is also a big boost, as you are no longer restricted to discarding a single card each turn. This means that if you end up with a bad hand, you are no longer saddled with it for many turns. Though this should be less of an issue now you can choose your own deck and select which cards to put in-play each turn.

They have also added the rule that most players had house ruled already; if you draw an impossible to achieve card, you can discard it without penalty.

The new stratagems also add additional flavour to the game. The ability to see in advance which cards you are going to draw, as well as taking cards from your discard pile for another opportunity to score provides some interesting challenges on how to spend your CP during the game. If your opponent is running a character-heavy army, then multiple chances to score Assassinate will be useful. Alternatively, late in the game, you could continue to score Behind Enemy Lines when your deck is running low and you know you will draw it, or Area Denial when there are fewer units on the board.

Overall
I think the change to these rules will be a big boost for maelstrom of war games. It will give you more chances to score each turn and to play in a more tactical fashion.

One of the biggest criticisms I hear about maelstrom games is that they don't work well in a competitive environment, as they are too random (a point of view I do not agree with!). However, the changes to the rules sees a lot of that random element removed. I would hope that people would give these rules a chance and hopefully see more tournaments adopt them to run all maelstrom missions.

For those interested in seeing the rules in action, check out my latest battle report.
Posted by Mike (St Andrews Wargaming) at 09:00