Part 5 of my Deathwatch Codex review will take a look at the Fast Attack choices available to the army. 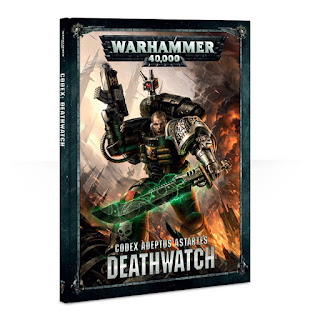 Fast Attack
Bikers
The Bike Squad got a nice points reduction from the index, going down to 29 pts each. That is only a couple of points over a normal Space Marine Biker, for which you get an extra attack and special issue ammunition. 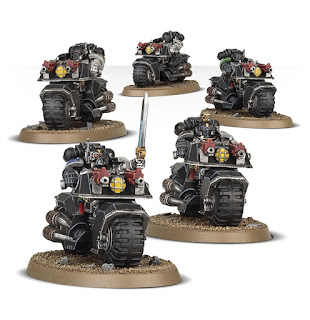 You now also gain the ability to give each Biker a Chainsword as well as a power weapon, allowing them to go up to 3 attacks each in combat, a nice little boost for the unit. The Biker Sergeant also now has access to the Deathwatch equipment list, allowing him to take a Storm Shield, Storm Bolter or Combi-weapon as just a few of the useful choices.

I think the Bike Squad is a strong unit. With twin Bolters and special issue ammunition, they can put out a lot of incredible firepower at longer range or in at rapid fire range. I think they are a solid addition to the Deathwatch army and you are likely to see many of the units fielded.

From experience, they are a big threat to the enemy army and are likely to be targeted very quickly and wiped out if you are not careful. Now that they are a bit cheaper, running multiple units could be a good idea to make the most of their firepower.

Realistically, you are only going to get a single turn firing with the unit before they are quickly wiped out. It doesn't take a lot to kill off a unit of Space Marine Bikers these days and most armies can manage it pretty easily. They do add some much needed mobility to the army, so I think they are still a useful addition.

Inceptors
Deathwatch now have access to Primaris Inceptors. These are a strong unit with their Assault Bolters able to put out a lot of reasonable firepower at S5 and AP-1. The Assault Bolter does not get access to Special Issue Ammuniton, a real shame, as they would be incredibly powerful with access to this.

They also have the option to take the Plasma Exterminators, which are incredibly strong plasma weapons, putting out at least 6 shots in a minimum sized unit, with the ability to put out 18 shots if you get incredibly lucky with the rolls. 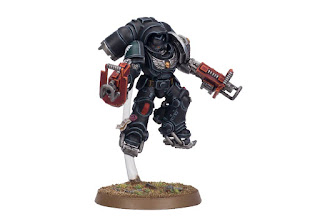 I haven't used the Inceptors yet in any of my Marine armies. At 45 pts per model for the basic version, they are pretty expensive, but do get some good mobility on the battlefield, are able to deep strike and can put out a lot of firepower at medium range.

I think they are a nice addition to most Marine armies, but don't do a whole lot for the Deathwatch on face value. In other forces, they can be used for bringing deep striking Plasma weaponry close to the enemy army. In the Deathwatch, the Hellblasters can fulfil this role using Stratagems and Relics, so there may not be much use for the Inceptors in the army.

They are of more benefit in a Primaris Kill Team, allowing the unit to fall back and still fire in the shooting phase. I think this is where you will see them more often, as this is a fantastic ability to transfer to the Kill Team.

Overall
Just a quick one today, as this is a short section of the codex. I think the Bikers are one of the big winners in the codex, getting even cheaper, gaining an attack if you arm them with a chainsword and allowing the Sergeant to take additional weaponry.

They are, however, a prime target and could be easily taken out before they can do much. If you want to keep them alive for longer, you will need to play them smart. Maybe not throwing them straight into rapid fire range to get blown away by the enemy guns.