Todd's blog is one of the more recent additions to my blog roll. I followed the blog after seeing the awesome work that he has been carrying out on preparing his Raven Guard army and display board for NOVA (a huge 40k tournament in the US that was just held this past weekend). This features some fantastic light work on the board, and is truly an amazing display. 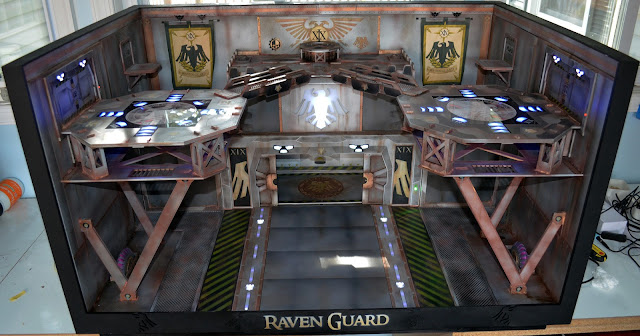 There has also been some great work on his building of a Space Hulk board that should look great when finished. 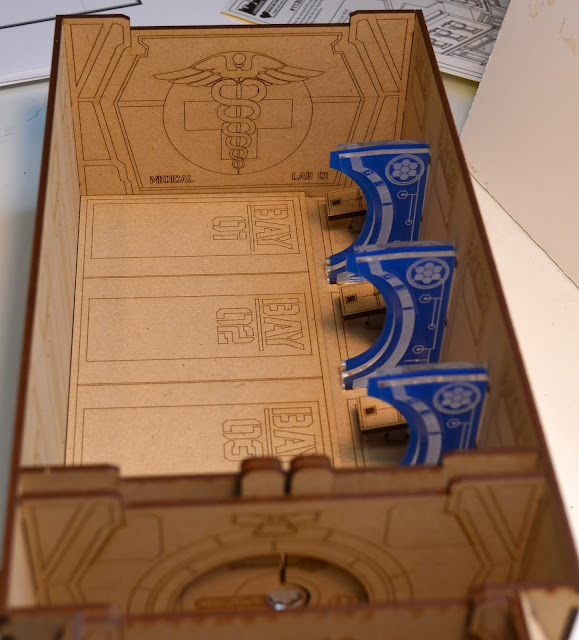 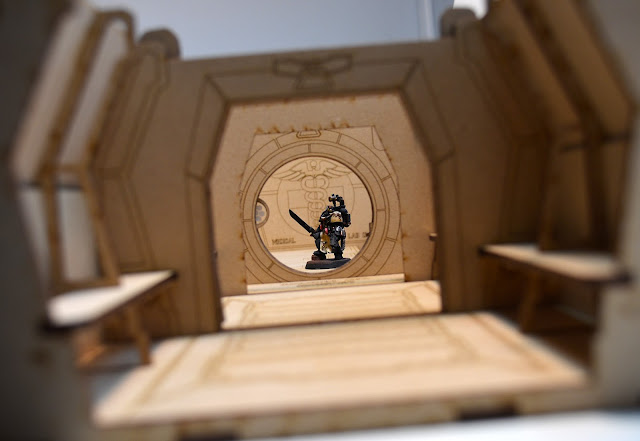 Check out his blog for some great hobby content and hopefully some great photos of this year's Nova tournament.

Here are Todd's answers to my questions:

1. What age did you get into gaming and what started it off?
Games in general or Miniature games? Well I’m child of the 70s and 80s, so I started off with Atari and Arcades. Still remember going with my Dad to pick up the brand new Atari 2600 and Space Invaders and Pac-Man. I upgraded to the Commadore 64 and getting into DnD with some of my friends. That is what got me into fantasy and sci fi. Computer games like Phantasee and Talenguard, plus all of the dice games and, of course Star Wars. Around 89 I started seeing Warhammer pop up at the local comic store my friend worked at and one of my friends started to paint minis. I went over to his house and was chilling while he painted (he was painting Squats by the way) and I was asking him some questions about the models. I’ve always been into art, mostly drawing and ink, but the models caught my interest. He gave me some of his extra colors and I went home ready to give it a shot.

2. What was the first model you ever bought/painted?
After getting the paints and the idea that I was going to start doing this I went to the comic store and started to look at the Rogue Trader rulebook. I sat there reading it and was drawn into the awesome story. At the time those models were amazing and I’d be throwing dice so it felt like the next step from DnD. My friend was playing squats and another friend was interested in Space Marines so I went Eldar. I’ve always been a fan of elves and they were more pirates than anything else at the time. So I ordered a blister of Eldar Heros I think they were called. They were terrible and I painted them with three colors (all I had at the time and no primer haha). At the time it didn’t go very far and I forgot about it for a couple of years until friends I started RPGing Palladium with were looking to start up into 40K. A new edition had just dropped and new models, I stuck with Eldar and picked up a blister of Dire Avengers and started to paint them up. I still have them 8) .. Still limited paint but they came out much better. 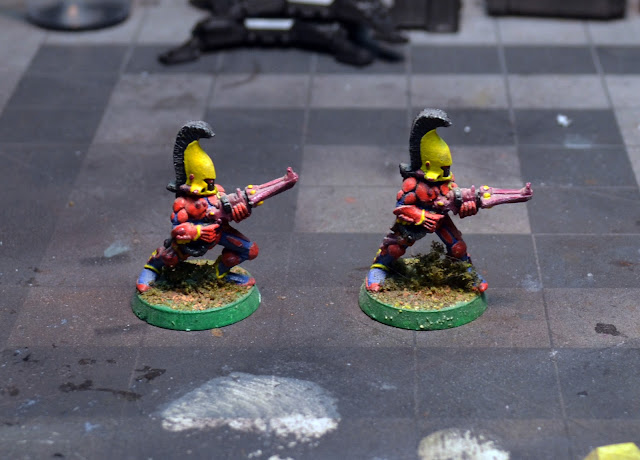 3. What is your favourite aspect of gaming?
Hmmm.. that’s a tough one. I enjoy all of it really. Painting is top of the list though I suppose, or just the camaraderie gaming can promote. Every year I go to the Nova Open and I see people there that I only see at the convention once a year, but it’s like no time has passed. Getting to know someone through their blog and watching them prep for Nova, just like me, and then meeting them there is an awesome experience. Through blogging I met Greg aka Greggles from Feed Your Nerd, John from 40K Hobby Blog, the guys from Facing the Grey Tide and Mordian 7th whom I’ve all met up with at Nova. Not to mention the people from a ton of other great blogs I visit regularly, sadly I’m not the commenter that Greg is, but I try to post something up here and there. 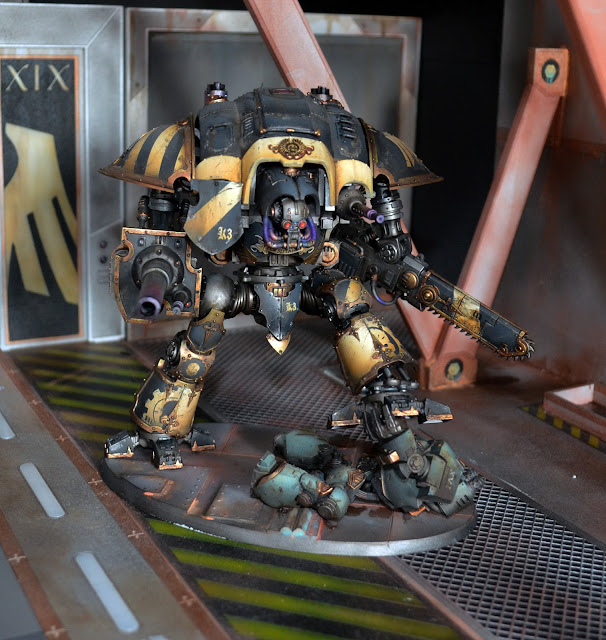 4. Fondest memory in gaming?
Another tough one, I’d probably have to say the whole convention atmosphere. With two small kiddos I only get out to Nova each year but it’s four days of hanging out with friends, throwing dice and talking about models and painting, games and playing. I love walking around seeing all the armies and displayboards, standing with the painters in front of the painting competition shelves talking about all the models and what we like and which we think will take top honors. Throwing dice with people and getting in most of the gaming I get in during the year. So I’d say it’s that whole experience.

5. What are you working on right now?
Haha, not to keep on about Nova but I’m working on my 30K Raven Guard army I’m taking to Nova to play in the 30K events. Most of the army is done, but I’m working on a pretty large Displayboard, as well as an Imperial Knight to finish out my list for the Big Blam. I’m loving the work on the Knight, but the displayboard is killing me haha.. I went a bit too ambitious this year (my Wife reminds me it’s every year). 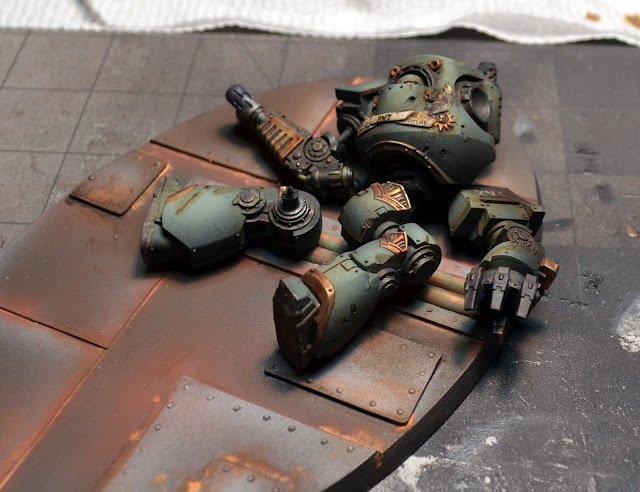 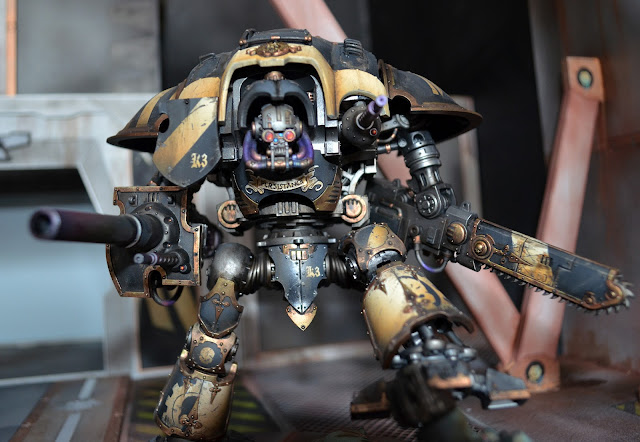 6. When you are not conquering the tabletop, what do you do?
I’m a Security Engineer for the Library of Congress, so mostly computer work. Other than table top I also still play DnD as well as some video games, mainly Overwatch at the moment. I also ride road and mountain bikes.

7. What would you say about your blog to someone who has never read it to draw them in?
If you like to look at a guy building models check me out. I do try to put some some tips out here and there and if people ask me about something I’ll try to help them with any of the techniques I use.

8. What is your favourite article that you have written?
I’d probably say the Kill Team Rules I made up. They were for 7th so I’ll have to update them but my friends have asked when the next game will be .. it’s pretty fun. Up to 8 people play at the same time and each person gets a random start location, a random arch enemy and a random mission to complete. I usually GM it and there are crates that people can pick up late in the game if they are falling behind. It could be bonus victory points or a Broodlord or Ork Warboss. Either mobs are pretty scary for 200 point armies! It’s always a good chaotic time! 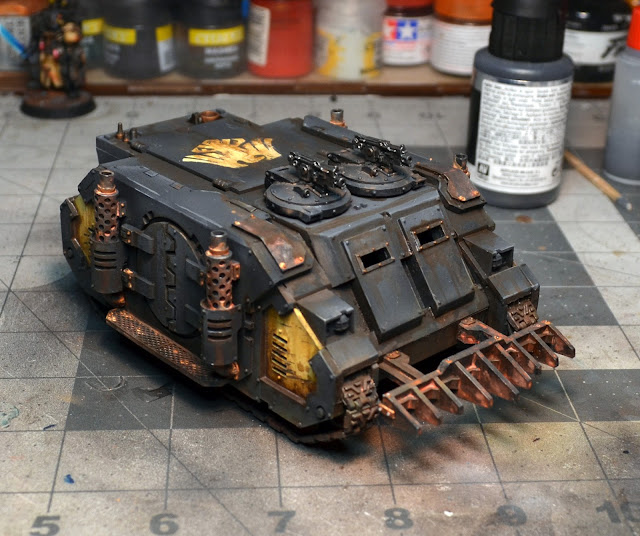 9. Which rule would you like to see changed or removed entirely?
I haven’t delved into 8th that much yet as I’m getting ready to play 30K at Nova and don’t want to get rule overlap. But I always hated the allies rules. To me that is what really ruined 7th, too much cherry picking going on. An army usually had strong and weak points and it was how you handled those weak points. Allies let you removed the weak point even though it made no sense fluff wise.

10. Which of your armies is your favourite?
Always will be Eldar first and foremost, started with them and they will always be near and dear. I love their play style and their look. Paint an army of Eldar and every squad looks different, they very rarely get boring to paint. Painting Raven Guard for the past six month has taken it’s toll. haha. 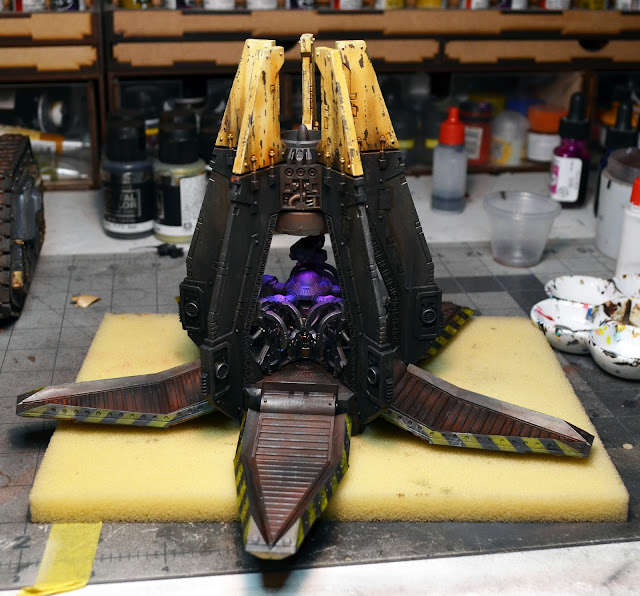 12. Any hobby tips or cheats to share?
If people ask me I’ll always tell them this.. don’t be afraid to go that one step farther. So many times I’ve thought, man adding this one stripe, design, etc… would really look awesome but then I’d be like well I don’t want to mess it up so I’d stop. Don’t stop! This is our hobby and we enjoy painting, you mess up, you’ll just get to do more of what you love. It’s the only way to ever really get better.

That and enter something in a painting comp and hang out at the displays, you’ll almost always find some other painters there to chat up… ask for advice and when someone is honest don’t be hurt. They are usually telling you to help you get better. If you are a better painter then give them friendly advice if they ask. Don’t be mean but sometimes we can’t see what would make our models that much better. I get and take advice all the time, but .. if you really like something stick to it. It’s your models! 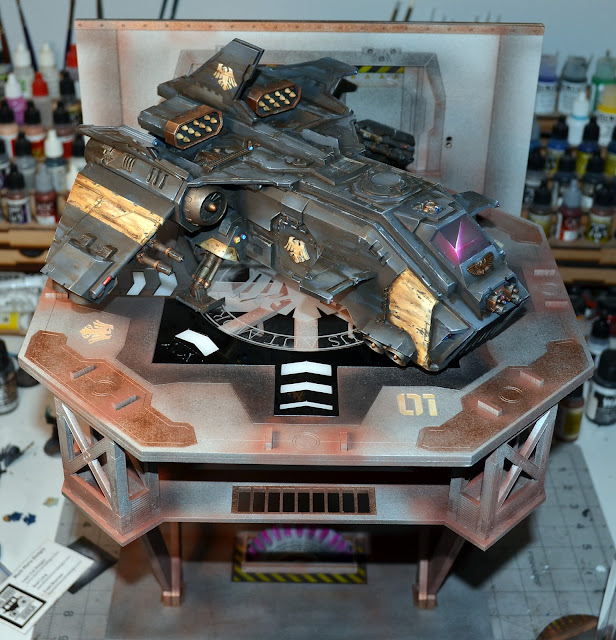 13. Tournament or Casual?
Casual Tournament goer… I love to go to the Tourneys but I could care less about a win or loss. As long as my opponent is cool and we have fun we both win!

But PC is my main gaming outlet 8)

Thanks to Todd for taking the time to answer my questions. Be sure to check out SincaiN40K and follow this blog for some great hobby content. 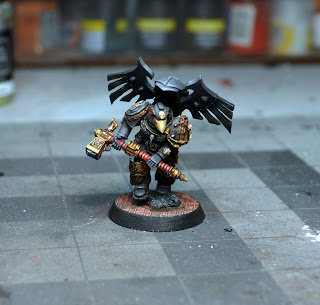 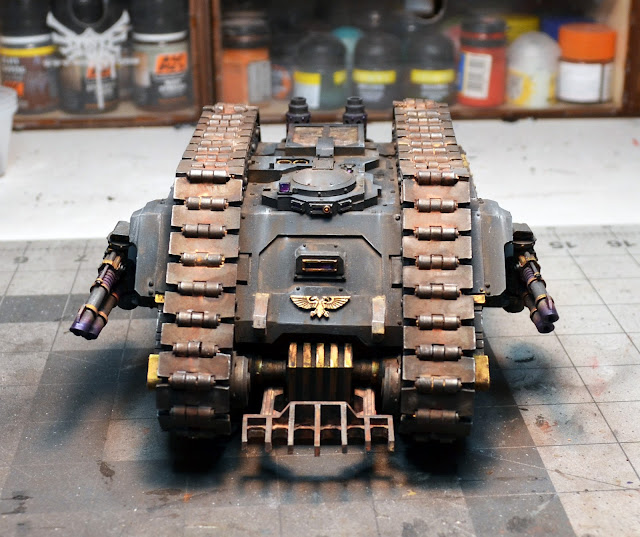 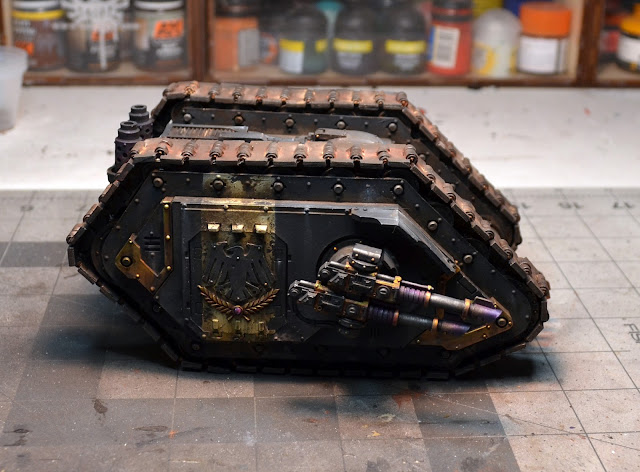 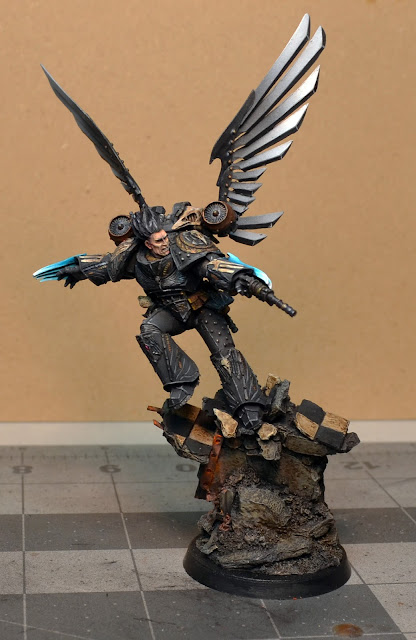 If you have a gaming blog and would like to take part in Better Know A Blogger, please get in touch at corrm83@gmail.com