This part of the Maelstrom of War review will take a look at the stratagems and missions available in the new rules. 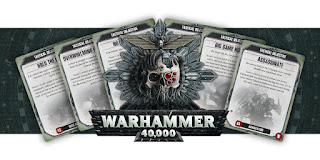