Chapter Approved 2018 is now upon us, with a whole host of new missions to try out in our games of 40k. The first part of my review will take a look at the new Maelstrom of War missions. These are my favourite way to play 40k, so I was keen to see what was in store. 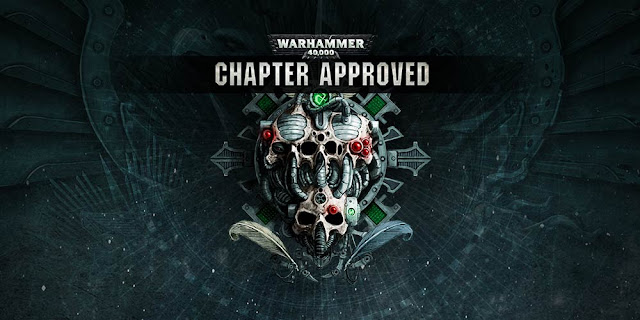 Maelstrom of War Missions
As well as 6 new missions, there are a number of special rules added to the maelstrom games that are a big improvement over how the game will be played.

Acceptable Casualties
Sudden Death no longer applies in the new maelstrom of war missions. What this means is that tabling your opponent does not automatically win you the game.

Finally! In my opinion, this is how the game should have been played from the start. In so many casual games and tournament games, I have had opponents go for wiping out my army, as opposed to actually even attempting to play the mission. This will now hopefully force players to actually consider going after the maelstrom cards/objectives for a hope of winning the game.

A gunline army can still sit back and pound the enemy force with their superior firepower, but this will probably punish them in the long run, as they are not collecting maelstrom points. This new rule change will probably not affect me at all, as in all maelstrom missions, the cards were always deciding how I was playing. Hopefully, we'll see a lot more players making greater tactical decisions in games; sacrificing a units' shooting to advance onto an objective, thinking about unit placement to best go after objectives in later turns.

If one opponent gets tabled, I think the game still continues, giving your opponent the chance to score more maelstrom points in their turn. This is one way they can try and win the game after tabling their opponent, but does not guarantee victory if your opponent has been focusing on scoring big in the maelstrom mission and has a significant lead.

I would hope more tournaments would adopt maelstrom only missions and get rid of kill points in an effort to encourage better playing of the mission, rather than just crushing your opponent.

Refined Strategy
Before the battle begins, you can select up to 6 maelstrom cards and remove them from your deck.

This is a nice new rule for getting rid of impossible to score cards in your deck, based either on your own army or your opponent's army.

I would have liked to have seen a player able to discard any impossible cards they draw, as this is the house rule that most people use anyway. This is a nice stop-gap though, to allow you to get rid of some unfavourable cards.

I wonder how many people will be keeping Domination with this rule now in effect?

Deployment Changes
Another big change in all the missions is how deployment occurs.

In the new missions, one player chooses which deployment zone they want. The other player then deploys their entire army, followed by the second player. The player that deployed first can then choose whether they go first or second. Their opponent can then choose to seize the initiative.

This is a big change that should not only make the pre-game a much more interesting tactical choice, as well as speeding up deployment.

One of the issues with the alternating drop deployment we were used to in 8th edition was that a reserves-heavy army had a clear advantage. I had many games where I was forced to deploy most of my army before my opponent had deployed a single unit. I can't complain too much though, as my Genestealer Cult army used this tactic to great effect in many games.

With more control over going first or knowing you will most likely be going second, you can account for this a lot more in your deployment; keeping units hidden from enemy guns, keeping out of range of enemy units, etc. Alternatively, you could also be punished for a more conservative deployment, as your opponent can make you go first, forcing you to move units into position to get line of sight to fire.

I think this will add some interesting tactics to the game and am looking forward to trying it out. I think this will also speed up deployment a bit, as it could take a long time in a very tactical game to decide on the best positions to put units based on what your opponent had just placed. It will also make units such as Scouts incredibly powerful, being able to deploy and block off your opponent's Scouts or "scout moves" and limit their board control.

First Strike
The concept of First Strike has also finally been adopted in these missions. This is essentially First Blood, but both players can score it in the first battle round.

Too many times, First Blood was pretty much a given point for the player that went first. Now, both players can score it, making it a more even game and more tactical.

Missions
Disruptive Signals
In this mission, players generate up to four maelstrom cards in their turn. There is also a new stratagem called Signal Interrupt for 1CP. This allows you to select of your opponent's Tactical Objectives, and they cannot score that card this turn.

This is an interesting one. I like any mission that uses more objective cards, giving you a better chance of going after more points. The stratagem is a neat idea, allowing you to potentially block your opponent from scoring big in their turn for only 1CP. This would be great for denying something like Domination if they are close to scoring it, or blocking them from scoring Blood and Guts on a turn they are poised to make a lot of charges and do a lot of damage in combat.

It can also mess with your own cards and stratagems. Imagine paying 2CP to re-draw a maelstrom card in your turn, only for your opponent to block it and potentially wasting your command points.

Decapitation Strike
This mission allows you to draw three cards per turn, allowing you to hold up to 6 cards in total. In this mission, characters are important. Each time a character is slain, you must discard one random card in your hand (D3 cards if it is your warlord).

Another mission that potentially allows you to have a big hand of maelstrom cards and score a lot of points. Characters can be a bit of a liability in this mission though, so focusing on your opponent's characters while keeping your own safe is probably a good tactic.

It might have been nice to get some form of bonus for characters achieving maelstrom cards or getting some form of super objective secured to mitigate the risk of them dying. You could put them into dangerous positions to score more points, but at the risk of losing cards if they are slain.

Strategic Gamble
In this mission, you draw up to three cards per turn, up to a maximum of 3. However, after you have generated three cards, you may choose to discard two cards and generate a new one. If you achieve the newly drawn card, you score double the number of points for that card.

This is another interesting mission for me. We all have games where you cannot achieve the cards you draw. The ability to discard two for big reward is a nice gamble. It could potentially put you behind, as you simply wont have the same number of cards as your opponent to score. However, it could pay off if you draw an easily achievable card and score double points for it. This would work really well for "Defend Objective X" cards, scoring you 4 points if you can hold it.

This would work well with the Dark Angels' "Secret Agenda" stratagem so that your opponent doesn't know what objectives you are going after, giving you better odds of achieving them, as they may not be able to move to block you much of the time.

Most players should be able to score both cards on their first turn, as you choose two that you are guaranteed to score in your first turn (unless the game is going hideously!). After that , you want to be scoring as many cards as possible to ensure that you always have 6 cards to choose from. It also adds to tactical play if you can block your opponent from scoring their cards, as this will limit what they can achieve in the following turn. Good board control is going to be key in this mission.

I really like the prospect of this mission, as it will really reward focusing on the maelstrom cards and good board control in the game. Static armies could struggle, leading to more dynamic play.

Visions of Victory
In this mission, you draw up to four cards per turn. However, when you have to generate a new objective, you must draw two cards and your opponent selects which one you take. The discarded cards are returned to the deck, so can be generated later.

This has the potential to be a really fun mission, as you pick the worst possible objectives for each other to score every turn. This could be a lot of fun in casual games, as you curse each other over the choices you are forced to make to score games.

Another really interesting mission that could potentially help or hinder your army, based on its composition. I tend to play more for holding objectives, so a roll of 1-3 could really hurt me in a lot of games. Alternatively, I'd probably be quite happy with a roll of a 6, as I rarely get a chance to score these cards (Kingslayer, Witch Hunter, Scour the Skies, Assassinate, Big Game Hunter, Priority Orders Received).

Overall
I'm really looking forward to trying out these new maelstrom missions in the new year (I doubt I'll get any more games in this year). As I have said multiple times, the maelstrom missions are my favourite way to play, so new variety is great for me.

I am also intrigued by the new changes to the missions from deployment, who gets first turn and Acceptable Casualties. I think that these will improve the game, as they are all choices that I would have probably made to my games.