This part of my Angels of Death Codex review features the rules and formations for the Raven Guard. These were first released with the Warzone Kauyon book and have now been grouped together with the rules for the White Scars and the rules for the other Space Marine Chapters.

The masters of Stealth and planning get some nice rules to help bring their unique flavour to the battlefield. I plan to use this post to cover the rules and Relics and take a look at the new formations and detachments in another post. 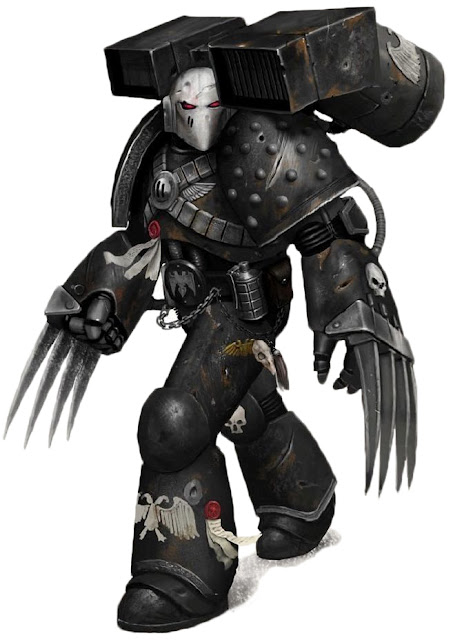 CHAPTER TACTICS
The chapter tactics for the Raven Guard are Strike From the Shadows and Winged Deliverance.

Strike From the Shadows gives all Raven Guard models that are not vehicles or embarked in vehicles with shrouded until the start of turn 2. In addition, you may add +1 to the roll for Night Fighting (so will get it on a 3+). This is a really nice bonus for an army. If you can get Night Fighting (a decent bet with a 1 in 3 chance), your infantry units will get a 4+ cover save in the open and could easily get a 2+ cover save in cover for the first turn, plus jinking bikers will get a 2+ cover save. This should greatly increase the durability of your army against all but Ignores Cover weapons.

Winged Deliverance provides a nice boost for your Raven Guard jump infantry. This rule allows them to use their jump packs in both the movement and assault phases (essentially getting fleet in the assault phase) and even allowing them to re-roll failed Hammer of Wrath wounds. This should provide a great bonus for any jump infantry, helping to ensure that they get into combat and helping with more of their automatic hits to wound.

I really like the Chapter Tactics for the Raven Guard. I don't think they are as good as the White Scars, but they certainly provide a great bonus for your army during the first turn of the game. The bonuses to assault marines (and Vanguard veterans) are useful, but assault marines are not seen as a competitive choice for many players.

WARLORD TRAITS
The Raven Guard get some nice thematic warlord traits to use in their army.

VANISH INTO THE GLOOM- When the Warlord's unit is fired at, it may move D6" in any direction. If they end up in cover, they get a +1 cover save. If the unit is out of line of sight if the original firer, the unit cannot choose another target. Can only be used once per turn, but not if the unit is falling back or charging.
A slightly toned down version of the Warp Spider's flicker jump. A D6 move is unlikely to get you out of line of sight often, but could get you into cover or even just closer to the enemy for a next turn charge.

CONCENTRATED ATTACK- You may re-roll charges against a single unit in line of sight of your warlord. A decent bonus for ensuring that your units will get into combat with a specific enemy target.

MASTER OF SHADOWS- Allows you to enact night fighting for a single game turn at the start of one of your movement phases. This should help with the durability of your army for a single turn, but will also affect the enemy army. I see this of being of use just before you launch your charges (as night fighting has no effect in combat).

SILENT STALKER- Enemy units attempting to fire overwatch at your warlord and his unit must take a leadership test to do so, suffering a penalty if they charged from cover. Another decent bonus for your warlord, sometimes mitigating the effect of overwatch fire.

EXIT STRATEGY- When rolling to end the game, you may add or subtract 1 from the result if your warlord is on the table. I think this is one of the best traits on the table. The ability to keep the game going or end it early is going to be very powerful, possibly ensuring your victory in many games.

SWIFT AND DEADLY- Once per game, your warlord and his unit may run and assault in the same turn. This will be a big bonus for any jump infantry, giving them a larger threat range when added to the chapter tactics of the Raven Guard.

A decent set of warlord traits. I think Exit Strategy is the stand out amongst the others.

RELICS
The Raven Guard get access to their own unique Relics of the Ravenspire.

The Armour of Shadows
Artificer armour that gives the wearer Stealth or Shrouded if he did not move at all during the last turn. I think this is pretty expensive for what it provides. An extra 15 pts just for Stealth does not seem worth it in my opinion.

Ex Tenebris
An assault 3 bolter with Rending and Precision shots. A decent Relic weapon, rending is always nice on any gun. This may be useful for some characters, but I imagine you would probably want your Raven Guard characters to get the extra attack in combat.

Nihilus
A scout veteran sergeant may replace his bolter with the sniper rifle Nihilus. This rifle has armourbane and allows the sniper rifle to fire at vehicles with a strength of 6. The model can also fire at a different target to its unit. A good bonus for a scout sergeant. Armourbane and strength 6 against vehicles means it should have a good chance at penetrating enemy vehicles. The AP3 and sniper means you should be able to use this to pick out special weapons or sergeants.

The Raven Skull of Korvaad
Adds one to the WS and Leadership of the carrier. If they are slain, all units within range of the death site have Hatred and Rage. An OK bonus if the carrier is slain to help the survivors combat the enemy, but I'm not sure I would be counting on one of my characters to die to get this bonus.

Raven's Fury
A jump pack that gives you +2S hammer of wrath attacks with the Strikdown ability. The real bonus here is the high strength hammer of wrath, granting you an automatic S6 hit (in most cases). Strikedown is not much of a bonus in combat. The only way it would affect your opponent is if they flee from combat or you flee from combat. For the same price as a regular jump pack, there is no reason not to take this Relic if you were planning on equipping a character with a jump pack anyway.

Some nice Relics for the Raven Guard. Nothing too overpowered compared to the White Scars and some of the other chapters. I would probably take a Chapter Master with Raven's Fury and Swiftstrike and Murder for a great killing machine. 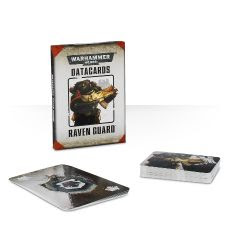 STRIKE FROM THE SKIES- Score if an enemy unit was destroyed by a jump pack unit or unit that arrived by drop pod that turn. Given the Chapter Tactics of the Raven Guard, you should probably have a few jump pack units in your army to try and achieve this one.

KEEP TO THE SHADOWS- Score if all non-vehicle units are embarked in a transport, building or within 1" of a piece of terrain. This seems quite thematic, but I'm not too keen on it. It would be good to get this early in the game, where you are likely to be near terrain to gain the benefits of your chapter tactics, but as the game goes on this may force you to move into unfavourable positions if you wish to score the card.

LET THEM KNOW FEAR- Score if an enemy unit failed a morale, pinning or fear test. May be useful to score, but I wouldn't rely on getting it too often (I rarely score the card similar to this in the standard deck).

PRIORITISE AND DESTROY- Score D3 points if the enemy warlord, a superheavy vehicle or gargantuan creature is destroyed. The D3 points is good as I could see this being quite difficult to achieve in a lot of cases.

HIGHLY MOBILE ASSAULT- Score if you charge and destroy an enemy unit that turn. Bonus points for destroying more units. This is a nice one as you will be generally hoping to completely destroy any enemy unit with a charge most of the time anyway. This will be much better for armies that are vulnerable to sweeping advances.

CRIPPLE THE ENEMY- Score if you destroy an enemy fast attack choice or a transport vehicle. Bonus points for destroying more of these types of units. I really like this one. Given the types of marine armies I run, destroying the opposing army's mobility is usually a key part of my battle plan, especially in maelstrom missions where mobility is key.

Some nice thematic tactical objectives for the Raven Guard. I think most should be achievable using the typical types of army build that you would expect for the Raven Guard, but Prioritise and Destroy may be difficult to get based on the fact that the most common types of units targeted are likely to be Imperial Knights and Wraithknights.

OVERALL
I really like the rules for the Raven Guard. I thought they were pretty decent when I first saw them, but reviewing them in this context and looking at the new formations (which I will review next) makes me like them even more. I might need to use my White Scars to trial some of the new rules and formations in the future (more assault marines required!).