This week, Marc from "Old School Gaming" took the time to answer my questions for Better Know a Blogger.

Marc blogs from the other side of the globe, writing and gaming from Sydney, Australia. I think what first brought me to Old School Gaming was a picture of Marc's Iron Snakes Sternguard squad. The combination of the unusual models with their Greek warrior feel and the amazing paint job were enough to get me to click on the link and his blog has been part of my blog list ever since.

Like any good 40k player, Marc also has a Dark Angels army that receives just as much care and attention as his Iron Snakes, with the most recent focus being on completing some Ravenwing bikers to add to his collection. He also does some great work on his Tyranids and a very special Guard army (more on that below). 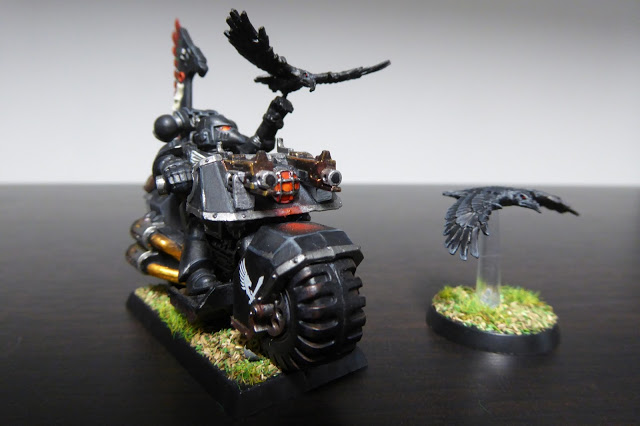 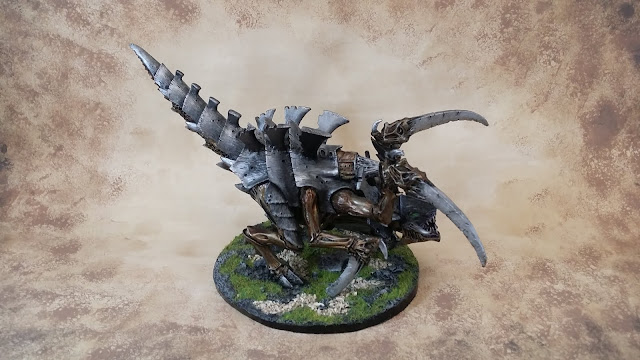 Not content to have just this many 40k armies on the go, his blog also frequently features articles on X-wing and Battletech.
He also constructs some amazing terrain pieces as well. Most recently this has included his Japanese garden and his brilliant Dawn of War plasma generator (which featured as his entry into Confession of a 40k addict's Imperial Knight prize giveaway).

EDIT- Marc actually ended up winning the competition with his plasma generator! 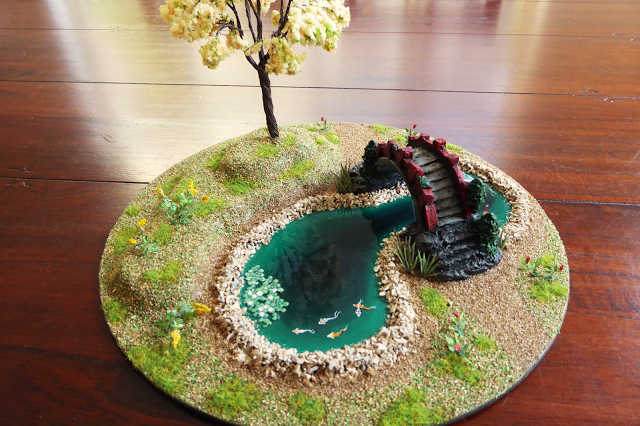 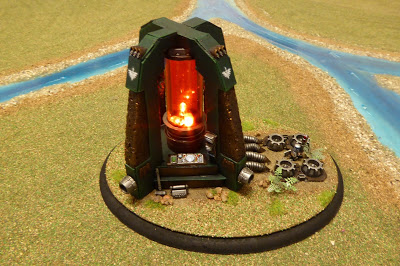 In fact, Marc was the first ever comment on my blog. This was on my second post describing how I got into wargaming, where he mentioned that he once had a 7000 pt fantasy battle using not a single miniature, but folded paper models. He has been a regular contributor to the comments section ever since.
As you can see, Marc's blog is well worth a look. He took some time out from creating these amazing pieces to answer my questions.

1. What age did you get into gaming and what started it off?
In ’96 a couple of mates taught me how to play 2nd Edition 40K during a camping trip; I was 15 years old. The game sunk it’s hooks into me pretty deep! The guys were very patient with me and focused on developing strong narratives in their games. Looking back now, I can see how those early experiences have shaped me as a member of the gaming community.

2. What was the first model you ever bought/painted?
The first models I bought was a Space Marine Librarian in Terminator armour and a Terminator with lightning claws. I did a quick arm swap and painted the Librarian up in the Legion of the Damned scheme. I can vividly remember huddling underneath a desk lamp in the middle of winter trying to paint flames over the black undercoat. What was I thinking!?
3. What is your favourite aspect of gaming?
At the moment I would have to say modelling, I have never been able to leave a model alone without sawing something off or doing a head-swap. I also love the variety of parts you can order online these days; it is very easy to make something unique. It is hard to find gaming time now that I have little kids, but when I do get around to it, it is usually spectacular.
4. Fondest memory in gaming?
Oh goodness! That’s hard…

For my bucks party all of my friends organised an epic Pirates of the Spanish Main and rum drinking session. We drafted our fleets and did some swaps (let’s just say the piracy started early…) then played until the early hours of the morning. A few days later I flew away and got married in the Cook Islands. It will always go down as my fondest memory because all of my friends were there, acting like pirates. I laughed so hard I had muscle pain in the morning, amongst all the other pains associated with rum.

I also have a multiplayer 40K scenario I like to bring out every now and then called “The Battle for Nurgle’s Cookbook”. We have played some hard-fought games over that damned cookbook. I can remember in one particular game, my opponent summoned a Greater Daemon of Nurgle right near the cookbook and claimed it. Every other model on the board poured fire into that thing but we simply couldn’t take it down. It was hilarious; I guess papa Nurgle wanted his book back!

5. What are you working on right now?
Some Van Diemen’s World Devils for a close friend. They take a lot of visual cues from the Australian Army, so I am trying to get them finished before ANZAC day, our national day of remembrance. I am also working on a Ravenwing Attack Squadron, which includes a flock of ravens, and an Iron Snakes Master of the Forge. 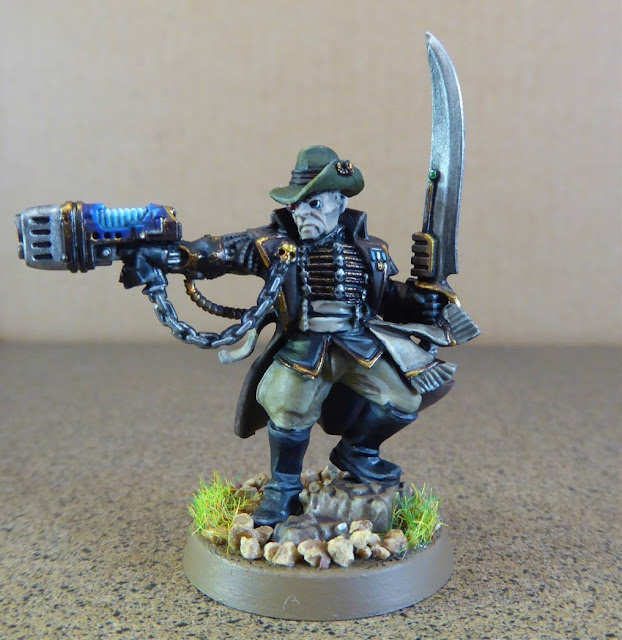 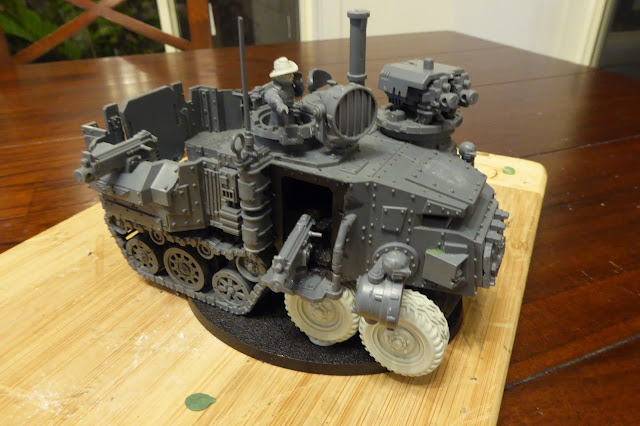 6. When you are not conquering the tabletop, what do you do?
I am a Chemistry and Science teacher at a local private school. Prior to that I was involved in the development of new anti-cancer compounds, particularly the design of molecules that bind with high specificity to target DNA base-pair sequences. I liked the mentoring component of the job better than the research (politics!) so I changed career. Apart from 40K, I play a lot of Battletech, Magic the Gathering, X-wing and other board games. Outside of gaming, I enjoy sailing and martial arts (at the same time, I really hope- Mike). 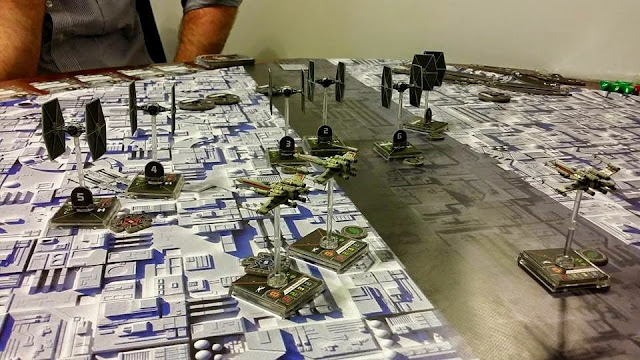 7. What would you say about your blog to someone who has never read it to draw them in?
Crumbs! I don’t think any of us actually do that, we just cast out our line and wait for someone to take the grim/dark hand-painted bait… I guess I always try to doing something out of the ordinary with my 40K projects. I can’t help it; I have been at it for too long now to follow instructions. Maybe that would draw someone in, then they would see the link I have to D Power’s “I’m alone with a dream” blog and phhhhffvvrt… SNAP! The one that got away :o)
8. What is your favourite article that you have written?
The article where I presented my finished Iron Snakes Sternguard squad would have to be up there. When I hit the “Post” button it was such a relief. I had literally been planning that project in my head for years, then spent months agonising over every detail. Every time I felt comfortable about something I just made it harder for myself. It is also the most viewed post on my blog, just edging out the Jurassic World 40K scenario I posted, which was also great fun. 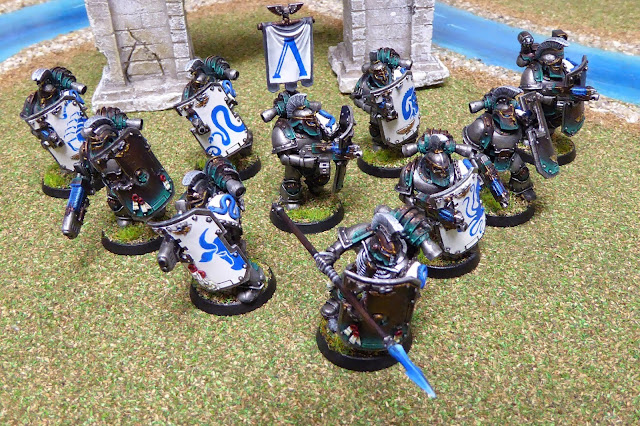 9. Which rule would you like to see changed or removed entirely?
Okay: bear with me here. Have you ever played 40K with no player turns? Simultaneous movement and shooting changes the game completely. It requires some important house rules, but as soon as you remove the “Player A moves and shoots first and all your stuff is dead and now you can’t do anything” aspect of the game, it becomes this thrilling new beast (you'll have to forgive our Australian cousins, they have some very odd ideas over there. Though that does sound fun!- Mike).
10. Which of your armies is your favourite?
My Dark Angels 3rd Company army will always be my first love (and rightly so- Mike). It has languished on the shelf for too long, though. Hopefully by the end of this season it will be better placed to contest some games. Artistically, my favourite is my growing Iron Snakes force. It is a great fusion of modern units with some very old school looks; keep an eye out for some Spartan-looking Centurions… 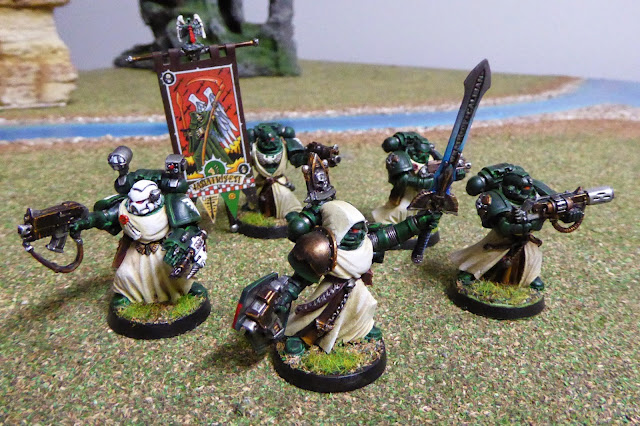 11. Secret wargamer or loud and proud?
A bit of both I think. Everyone who I have told has responded positively, particular my relatives, many of whom seem to have an innate interest in miniatures. I tried to hide it from my wife when we first met but she found out within minutes. I’ll save that story for another post!
12. Any hobby tips or cheats to share?
Make yourself a wet pallet and a light box. Don’t let the fear of failure stop you from taking risk when you model and paint. Failure = experience. Great painters and modellers are great because they have the kind of experience you get from taking risks. I’m not there yet but I’m working on it.
13. Tournament or Casual?
Casual. My last tournament was back in ’97, when I was beaten by Space Wolves assault cannon spam. It wasn’t a fun game and I decided tournament play was not for me.
14. Nintendo or Sega?
Nintendo. I spent many hours on Super Mario Brothers back when it was released. My thumbs still have pins-and-needles from playing Streetfighter II.
15. Xbox or Playstation?
Xbox. Me and Halo go way back. Reach was emotional.
16. McDonalds or Burger King?
McDonalds. Burger King here in Australia is horrible.
17. Coke or Pepsi?
Water! I went cold-turkey last November to fund an X-wing purchase and haven’t looked back (Good man Marc! I would try this myself, but I think the sugar withdrawal would kill me- Mike).

Thanks Marc for taking the time to answer all my questions. If you haven't already, hopefully this has convinced you to check out Old School Gaming.

If you have your own 40k blog and want to take part in Better Know a Blogger, get in touch and let me know (corrm83@gmail.com).
﻿
Posted by Mike (St Andrews Wargaming) at 09:00