Welcome to part 3 of my review of the Angels of Death codex supplement that was recently released. This part will focus on the new rules and formations for the Iron Hands chapter.
I think that Iron Hands are regarded as one of the more competitive chapters in the Space Marine codex (along with my favoured White Scars) thanks to the improved durability of their forces through access to army-wide Feel no Pain (6+) and It Will Not Die. I think the new rules and formations detailed in Angels of Death will help make them an even more competitive choice for marine players. 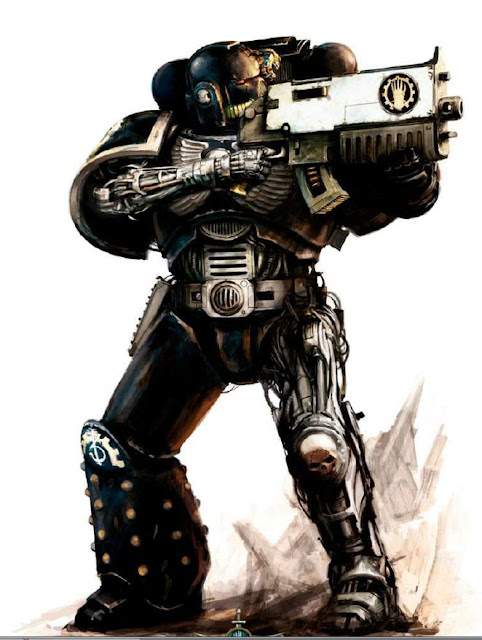 CHAPTER TACTICS AND RULES
The Chapter Tactics for the Iron Hands are The Flesh is Weak and Machine Empathy.
The Flesh is Weak provides infantry with a 6+ feel no pain roll. In addition, if they have access to another source of feel no pain, they get +1 to their roll (so a Narthecium would provide a 4+ feel no pain roll).
Machine Empathy gives Iron Hands vehicles It Will Not Die. It also gives Iron Hands techmarines +1 to Blessings of the Omnissiah rules.
Angels of Death also gives the Iron Hands a couple of new special rules for army building. March of the Ancients allows Dreadnoughts to be taken in a Heavy Support slot, while Scions of the Forge allows you to take up to 3 techmarines for every HQ choice (who don't use up a slot in the force organisation chart themselves). This allows you to load up on Dreadnoughts and Techmarines if you wish to better utilise the Iron Hands' special rules.
I like the bonuses that the Iron Hands get. If it wasn't for the White Scars, I would consider using these as my regular marine army.

WARLORD TRAITS
Iron Hands now get their own warlord table to roll on, giving some nice characterful bonuses to your warlord or army.
ADEPT OF THE OMNISSIAH- Gives your warlord Blessings of the Omnissiah. If he already has it, gets to re-roll when attempting a repair. This seems to be a decent enough bonus to your warlord. I never really use Techmarines, so don't know how useful this rules can be in games.

WILL OF IRON- Warlord is Fearless. As I have said before, I think a Fearless Warlord (or any independent character) is a worthy inclusion in any marine army.

ALL FLESH IS WEAKNESS- Warlord gets +1 to any Feel no Pain rolls. I think this is one that most people will want to get. Combined with a Narthecium, this will give your warlord a 3+ feel no pain roll (which gets more ridiculous with the new formation).

MERCILESS RESOLVE- Warlord and units within 12" get Crusader. A decent bonus, but not great I think.

A pretty decent set of warlord traits for the Iron Hands. I think All Flesh is Weakness is the stand out when combined with the Iron Hands' chapter tactics. Will of Iron is a pretty close second for me. 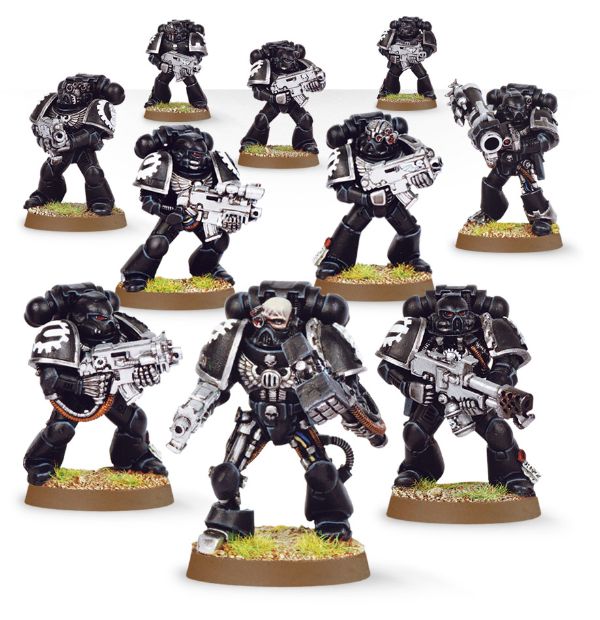 RELICS
The Iron Hands also get access to a number of their own Relics too.

The Mindforge Stave
Essentially, a cheaper force power fist. This may be a nice weapon for your Librarian. The chances of wounding with (generally) S8 AP2 are pretty high, with force providing instant death.

The Axe of Medusa
A +2S, AP2 unwieldy axe that becomes +2S on to hit rolls of 6. For the same cost as a power fist, you get an axe that will give you the same strength 1 in 6 times. The only benefits to The Axe of Medusa are that it is master-crafted and not a specialist weapon, so you will get +1 attack for having a bolt pistol. I might be inclined to just go with the power fist for the guaranteed strength 8 with every attack.

The Ironstone
Friendly tanks and walkers within 6" pass It Will Not Die on a 4+. On the roll of a 6, this repairs a weapon destroyed or Immobilised result. I can see a Chaplain with this leading a squad of Dreadnoughts to combat, using this to aid their survivability. The only issue with me for It Will Not Die is that it is not a save, but a roll at the end of the turn. This assumed any glancing or penetrating hits will not destroy the vehicle before you get a chance to use it.

Betrayer's Bane
This is essentially a master-crafted combi-melta where the melta can be used more than once. For only 15 pts extra, this seems like a good deal to me if you are able to get in range to fire more than one shot. It is really annoying when you fire your single combi-melta shot and miss with it. This gets to fire multiple times and the master-crafting should help your chances to hit.

The Tempered Helm
All friendly units within 24" can use the bearer's leadership for morale checks. A single unit within 12" get to re-roll to Hit rolls of 1 in shooting. A decent Relic which should provide Ld 9 or 10 to most of your army and help one unit's shooting.

A decent set of Relics. The Gorgon's Chain is expensive, but I think it will see a lot of use due to the nasty combinations you can get when paired with the Iron Hands' chapter tactics and formations (more on this below). Betrayer's Bane is also decent, but it depends how many shots you will get with it if it is worth the cost overall. The others I could survive without.

TACTICAL OBJECTIVES
The Iron Hands get their own tactical objectives to replace 11-16 in the regular deck.

METHODICAL DESTRUCTION- Choose 3 enemy units and label 1-3. You get victory points for destroying unit 1, extra for 1 and 2 and maximum points for all 3 units. I like this one. It forces you to think about target priority and rewards you for taking risks to destroy all three units.

ADVANCE AND SECURE- Score if you control the objective marker closest to the centre of the board (if there are equidistant objectives, your opponent chooses which one). Again, another nice one. You are forced to advance, but not too far into your opponent's deployment zone.

MARCH OF THE MACHINES- Score if one of your walkers assaulted. Not too bad. It is dependent on you having a walker in your army. I don't think Dreadnoughts are considered a particularly competitive choice these days, but perhaps the Iron Hands' chapter tactics and some of the Relics may make them a bit more useful in the army.

DESTROY THE WEAK- Score D3 if you destroy a unit in the shooting and assault phase. Some nice bonus points for what should be quite an achievable objective.

THE STRENGTH OF METAL- Score if one of your models regains a wound or hull point from Machine Empathy or you make a successful Blessing of the Omnissiah roll. Again, should be relatively achievable for most types of Iron Hands armies.

COLD FURY- Score if an enemy unit was destroyed by one of your vehicles, bonus points for destroying more units. Again, may be easy or more difficult depending on your army composition.

FIST OF MEDUSA STRIKE FORCE
The Iron Hands also get their own Gladius-type formation with some great bonuses to the army.

REJECT THE FLESH, EMBRACE THE MACHINE- All models add +1 to their Feel no Pain roll when within 12" of an independent character from the detachment (including the character himself, I assume). This is a great bonus and will provide a 5+ feel no pain for any of your models within range of a character, greatly increasing the durability of your army. You will probably want several Independent characters in the formation to get maximum bonus from the rules.

ROUSED MACHINE SPIRITS- Vehicles in the strike force gain power of the machine spirit within 12" of an independent character. A nice bonus allowing you to fire an extra weapon each turn with your vehicles.

The strike force consists of the standard options of 1-2 Core choices, 1+ Auxiliary choices and 0-3 command choices.

The command choices consist of a Strike force command, Reclusiam command squad and Librarius Conclave. The Strike Force command is unusual in that it consists of either a single Captain (inc. terminator captain), Chaplain or Venerable Dreadnought (plus optional command squad or honour guard). The inclusion of the Dreadnought is a nice thematic choice for the Iron Hands.

The Core choices consist of a Battle Demi-Company, Armoured Task Force or Stormlance Battle Demi-Company (first introduced in the Kauyon supplement). This should provide you with plenty of bodies and vehicles to benefit from the special rules.

The Auxiliary choices include many from Codex Space Marines such as the 1st Company Task Force, 10th Company Task Force, as well as the Skyhammer Annihilation Force. It also includes the option for taking a single Dreadnought (all 3 types) or a Tactical Squad and Dreadnought as auxiliary choices. I like the auxiliaries that allow you to take only 1 or 2 cheap units rather than 3+ units or vehicles. This makes the formation more useful for low points games.

The Iron Fists rules and new formations open up some very tough combinations for a Space Marine player.
For example, an Iron Hands Chapter Master with Artificer armour on a bike with the Gorgon's Chain, backed up by a Command Squad (with Apothecary) in the Fist of Medusa Strike Force is a very powerful tank. This character will have T5, 4 wounds, with a 2+ armour save, 3+ invulnerable save and a 2+ Feel no Pain save and Eternal Warrior (at least until he is wounded). Anything short of a Demolisher cannon round is going to have a tough time getting past those stats. Add in the new Earth Blood psychic power to restore lost wounds and the Chapter Master will be nigh-on invincible. In addition, the rest of the Command Squad will get a 3+ Feel no Pain save when in range of the Chapter Master.

I can see this combination become very popular for Deathstar units.

OVERALL
The rules and new formations for the Iron Hands greatly improve an already durable army that the Space Marines are. Some of the Feel no Pain stacking possible is incredibly useful. They were already a popular Chapter for many players and I can see these rules improving them further in many people's regards.