I've been a bit lax with reporting the results of the campaign recently, been a bit busy to get them written up. The results for turn 5, battle phase 1 are in. The map now looks like this: 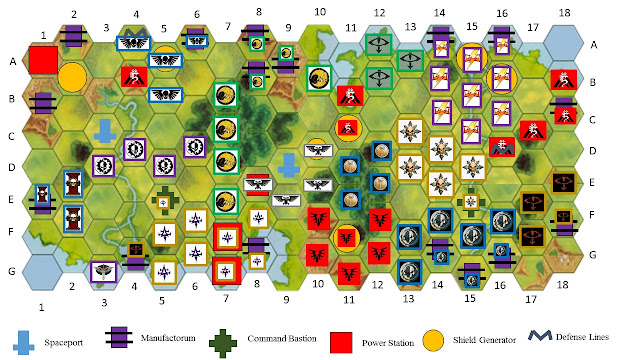 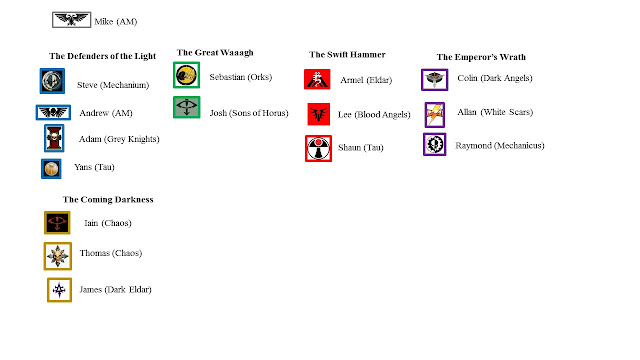 The forces of the Eldar launched an assault on the Shield Generator of the Astra Militarum, hoping to expose a weakness to allow them to sweep into their territory. Fortunately, the forces of the Guard were able to repel the attack of the Seer Council, thanks in part to the assistance of an Assassin (I defended my territory from Armel's attack in our battle report a few weeks ago).

The Chaos hordes assaulted the Dark Angels line to the south, obliterating their defences and taking over the Manufactorum that had held (Ian beat Colin to claim the Manufactorum).

The White Scars used the distraction from the Chaos attack on the Dark Angels to launch a raid on the Chaos lines. The attack was beat back however, and the Scars retreated back to their stronghold (Allan attack Thomas' position, but was beaten and Thomas claimed his own tile to expand the his empire).

The forces of the Mechanicus and Dark Eldar also secured victories and gained more territory (James and Steve won their games and expanded their own strongholds).

The forces of the Tau to the North withdrew from the region, the greater good would be served better elsewhere. Their departure left a void that the other forces in the region would surely surge to fill (unfortunately, Shaun had to withdraw from the campaign, leaving many buildings that could be occupied).
﻿
Posted by Mike (St Andrews Wargaming) at 09:00