Welcome to part 4 of my review on the new Angels of Death Codex Supplement. This part will look at the rules and formations for the Salamanders. 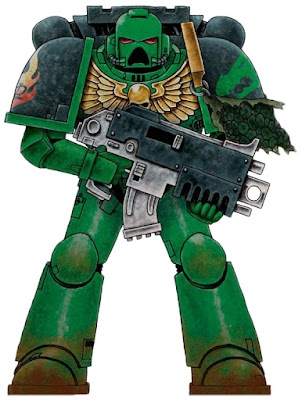 CHAPTER TACTICS
The Chapter Tactics for the Salamanders are Flamecraft and Master Artisans.
Flamecraft gives all Salamanders models 4+ feel no pain against flamer weapons and allows them to re-roll all to wound and armour penetration rolls when using flamers. A nice bonus and thematic to the army. No doubt a standard Salamanders army will contain a lot of flame weapons to benefit from this.
Master Artisans allows each of your characters to master-craft one selected weapon for free. Again, a really nice bonus, particularly for characters wielding combi-bolters as they are more likely to hit with their one shot.
Unlike the Imperial Fists and Irons Hands, the Salamanders don't get any rules for modification of the force organisation chart.

WARLORD TRAITS
The Salamanders also get their own specific warlord traits table to roll on.

ANVIL OF STRENGTH- Warlord gets +1 strength. A decent enough bonus.

LORD OF FIRE- Warlord gets 2+ Feel no Pain against flamer weapons. A very specific bonus. Will not be of use a lot of the time, but will help your warlord tank wounds against flamers.

PATIENT AND DETERMINED- You can add 3 to the roll to see if the game ends. This is huge, pretty much ensuring that the game will go on to turn 7 if you want it to. Random game length can be a double edged sword a lot of the times, but knowing the game will go on to turn 7 guaranteed if you want it to is a huge boost for your game. If it worked both ways (e.g. -3 to roll as well), this would be phenomenal.

MIRACULOUS CONSTITUTION- Your warlord gets It Will Not Die. A good bonus for keeping your warlord alive.

FORGE MASTER- Warlord gets to re-roll all failed to hit rolls with master-crafted weapons. This includes any Relics that are master-crafted that the warlord has. Will be very useful for any close combat weapons to improve your damage output.

NEVER GIVE UP- Warlord and Salamanders units within 12" have the Stubborn rule and re-roll failed Leadership tests. I really like this one, anything that keeps your units in the fight is a great bonus.

A decent set of warlord traits. I think that Patience and Determined is the stand out on. Anything that cuts down the randomness of the game ending is going to be a great benefit. 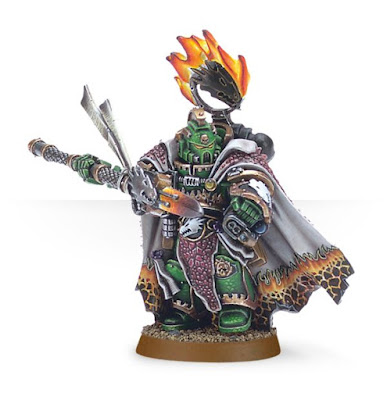 RELICS
The Salamanders get access to their Relics of Nocturne.

Drake-Smiter
This is essentially a master-crafted Thunder Hammer that has the awesome Mighty Strike rule. This rule allows you to exchange all your attacks for a single strength D attack. This is a great weapon, but is expensive at twice the price of a thunder hammer. This will be great when you roll a 6 on the Destroyer table and is great for bypassing invulnerable saves and feel no pain rolls. Depending on how many attacks your character has, you may be better off using all your attacks on a model or vehicle (especially if invulnerable saves are allowed vs Destroyer attacks at your club/tournament).

Nocturne's Fury
An AP4 flamer that can either be fired normally or as a torrent weapon (in which case it becomes heavy). A decent weapon for a Salamanders character given their chapter tactics.

The Salamander's Mantle
Provides Eternal Warrior. I think this is going to be a popular Relic. Combine it with a Storm shield and you are still 10 pts cheaper than the Shield Eternal (you don't get Adamantium Will, but I don't think this was the main reason people were taking the Shield Eternal).

The Tome of Vel'cona
Librarians only. It gives them the Molten Beam psychic power (without affecting Psychic Focus) and adds +1S to all witchfire powers. Not a big fan of this one. Molten Beam is ok, and the +1S is nice, but I think that Psychic Shriek is one of the most popular witchfire powers and this has not effect on it. I would give it a miss.

Vulkan's Sigil
Chaplains only. Once per game, it can be used to give the bearer's unit +1 attack until the end of the phase. A decent bonus, but quite expensive at 30 pts. Most likely you will want to give it to a bike squad or jump-pack armed squad to make the most of it. I would probably not use this much either.

Wrath of Prometheus
A longer ranged bolter with S5, AP4, master-crafted and Rending. Decent enough and relatively cheap. Would be worth taking if you had the points left over.

The Salamanders have a decent set of Relics. I can see Drake-Smiter and The Salamander's Mantle being a popular combination for a Chapter Master. The rest of them, I would probably leave.

TACTICAL OBJECTIVES
As with the other Chapters in the book, the Salamanders get access to their own thematic tactical objectives cards to replace 11-16 in the standard deck.

VULKAN-S GAZE- Score if you destroy an enemy vehicle with a melta weapon. Seeing as you will most likely be targeting vehicles with your melta weaponry, this seems like a pretty decent card. Unfortunately, it will not apply to melta bombs, so you will have to hope that you hit with your shooting attack (with all the master-crafting going on in this chapter, that should hopefully not be a problem).

WEATHER THE STORM- Score if you successfully charge a unit and suffer no wounds from overwatch. This one seems pretty decent to get. Unless you are charging units with lots of flamers, I always find that you need to be particularly unlucky to suffer wounds from overwatch rather than seeing overwatch as a guaranteed way to hurt your opponent.

LEGACY OF ISTVAAN- Score if you have 3 units within 18" of your table edge and destroy one enemy unit in your table half. This should be quite achievable, assuming your opponent is advancing into your table half.

LOOK THEM IN THE EYES- Score if you destroy an enemy unit within 6" of one of your units. Score extra points for destroying more units in a turn. Again, should be quite achievable if you are packing lots of flamers (as any good Salamanders army should!).

FIRES OF NOCTURNE- Score if you destroy an enemy unit with a flamer weapon. Score extra points for destroying additional units. With the number of flamers you are likely to be running in a Salamanders army, this one could be quite achievable.

Some this thematic cards for the Salamanders that should add some interesting challenges to a game.

FLAMEBADE STRIKE FORCE
The Salamanders get their own Gladius-type formation that gives them some nice bonuses in their command benefits; Vulkan's Teachings, Scorched Earth and Not One Step Back.

Vulkan's Teachings gives your warlord two warlord traits, one of which must be taken from the Personal traits table. A nice bonus giving your warlord a good boost.

Scorched Earth adds +1S to all the flamer weapons in the detachment. Strength 5 flamers and strength 6 heavy flamers are a great free bonus. This will be great for taking on space marine bikes or jetbikes and will demolish any horde armies you may come across.

Not One Step Back makes any unit that did not move in the movement phase Fearless. A really good bonus if you are running a static gunline army or are locked in combat at the start of your turn. This should help keep your units in the fight for a longer period of time.

The formation consists of the standard 1-2 Core choices, 1+ Auxiliary choices and 0-3 Command choices.

The Command choices consist of a strike force command (Vulkan or Captain or Chaplain and options to take honour guard or command squad), Reclusium command or Librarius conclave. The core choices consist of a Battle Demi-Company or Stormlance Battle Demi-Company. The Auxiliary choices consist of options from Codex Space Marines or the new formations from the Kauyon supplement. One new option allows you to take a Land Raider Redeemer on its own. A nice addition for the Salamanders as you would normally be forced to take multiple Land Raiders or other tanks and units to have one in your strike force.

OVERALL
The Salamanders get some great new warlord traits and a couple of stand out Relics. The new Strike force formation gives some decent bonuses for the Salamanders, especially if your army comes packed with flamers. I'm not sure it has better bonuses than the Gladius strike force, so this may still be a better option.