Welcome to my review of the new Angels of Death Codex supplement for the Space Marines (quick as a flash, I only picked it up this morning). The supplement combines the special rules for various chapters of Space Marines, some previously published, and adds new rules for psychic powers and scenarios.
I picked the Codex supplement up today and had a look through the new rules. I tried to avoid most of the leaks and spoilers that had appeared online before it was released, so this review will be from my initial thoughts that I had while checking out the rules. As such, these are only my own opinions on various aspects of the new rules and have not been through any playtesting yet (though I'm sure they will do in the near future). 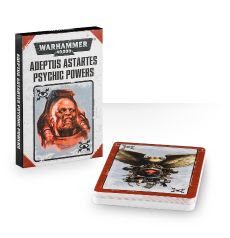 First up, I wanted to focus on the new psychic powers that are now available to Space Marine Librarians and review each of the four new decks. Subsequent reviews will focus on the different new models, chapter-specific special rules and scenarios that the marines will now have access to.
Initially, I was not going to pick up the book, just the psychic cards for the new powers. But when it came time to pre-order them, I simply clicked on the book and cards bundle and got both. I figured I could review the new rules in the book for the blog and if I liked it, I would keep a hold of them (I already have the White Scars formations and new rules from the last supplement, so wasn't too bothered about the new ones). The softback book is nice. I do like the new hardback codices that you can buy now, but the reduced weight should come in handy when transporting all the rules I need in one bag. It would have been nice to get a small discount for purchasing the book and cards together, but it is not a deal breaker.
The box that the cards come in is not the thick card I am used to with other card sets such as the previous psychic power decks, the tactical objective decks and army specific decks. That's a shame as I quite like the sturdy quality of these boxes. The cards themselves also feel a little bit thinner than normal. Odds are I will probably put these new decks with my old Divination and Telepathy decks for transport (I rarely use the other 4 decks anyway).
Anyway, on to the new decks and rules. Each section will give a quick run down of the new psychic powers and my initial thoughts on them.
LIBRARIUS DISCIPLINE
This deck seems to focus on the manipulation of saves, boosts to the Librarian and a couple of shooting attacks.
The Emperor's Wrath (WC1)
With the range of a grav gun, S5 AP3 and an assault blast, this is a witchfire power that is ironically really good at killing marines. A decent primaris power, the blast helps as there is little worse than successfully manifesting your power and then missing with the shot.