The latest in my series of Better Know a Blogger features Alex, who writes "From the Fang".

I hope he won't mind me saying, but I consider From the Fang to be one of the UK's premier 40k blogs, with a huge following and excellent content. I think what first brought me to Alex's blog was his great codex reviews, particularly the review of the Ork codex, and his battle reports. Regardless of what he is posting, I find the articles are always quite substantial and well worth a read- no click-baiting type content to be found here.

Alex has also been running the very successful Blog Wars tournament since 2011. Initially aimed only at bloggers, the event was soon opened up to non-bloggers and became a very fun day of gaming with a great atmosphere. Alex's philosophy was to have a tournament that encouraged players to have fun and not go with a super-hard internet list to crush all before them. I was fortunate enough to attend Blog Wars 9 and Blog Wars 10 and had an absolute blast at them both- the atmosphere was great and very friendly, but I still managed to get three very tough games during the day.

In fact, signing up to attend Blog Wars 9 was one of the main inspirations for me finally taking the plunge to start by own blog. Even though the event was no longer just for bloggers, I felt that if I was going to an event called Blog Wars, I may as well go whole hog and get started with my own blog. Alex was one of the people that I contacted for advice about starting my own blog and his early comments and advice on his experiences have helped to shape St Andrews Wargaming into what it has become today, so a big thanks to him for that.

Sadly, Blog Wars 10 was the last of the Blog Wars. It was a huge achievement and two tournaments I will always remember fondly. Fear not, however, as Alex is continuing to evolve his thoughts on running a competitive, yet fun and friendly tournament experience with Double Trouble in June. This is a 40k doubles tournament, but the twist is that rather than having a set partner for each game, you will get a random partner for each game. I'm really looking forward to this, as it should provide a strong tactical challenge for each game. Will you end up with an odd match up that has a blatant weakness or will you mesh well with your opponent's army and destroy all before you?

Anyway, let's get on with finding out a bit more about Alex who took the time to answer my questions.

1. What age did you get into gaming and what started it off?
I think I was probably around 10 when I first played a GW game in the form of Blood Bowl. It seemed insanely complicated but this didn't deter me from getting into 40K probably around a year later. I got the 2nd edition starter boxed set for Christmas and started to collect Ultramarines with allied Eldar shortly after. I stayed with the hobby until sometime around the early 2000s. My main opponent lost interest though, so my collection was boxed up and not seen again until 2009ish when I was planning to put them all on eBay. My friend and I decided to get a copy of the 5th Ed rulebook and have one last game.......

2. What was the first model you ever bought/painted?
I think the first model I actually bought for myself was a Space Marine Bike and I'm sure I still have the box somewhere (but not the model). My Ultramarines were thickly sprayed with white car primer and then Ultramarines blue was slapped on with bits of yellow, red, white and metal here and there. Most of the detail was obliterated but at least a bigger proportion of the army was painted in those days! (I think we all did this when we started, paint liberally applied with Citadel Trowel[TM]- Mike). Here's a shot of them before they went on eBay. 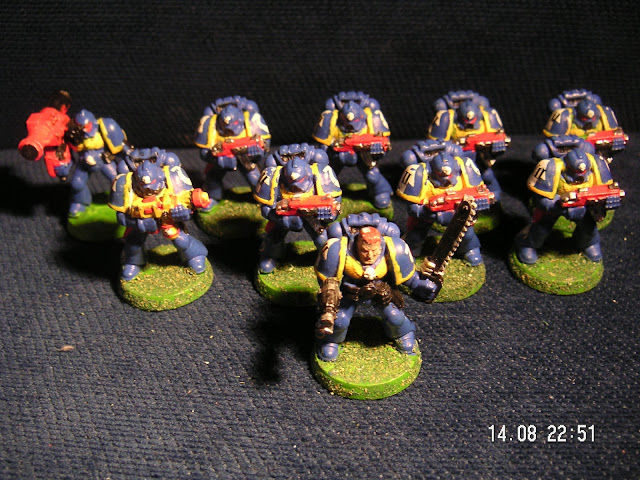 3. What is your favourite aspect of gaming?
I’ve always loved assembling the kits as it takes me back to Airfix as a child but nothing beats having a long close game with good friends using miniatures you’ve lovingly painted.

4. Fondest memory in gaming?
There have been so many. Winning the doubles at WHW has to be up there but the memory of taking over my parents’ dining table for two days straight with a 3000pt game of SM/Eldar vs. CSM back in my early teens still makes me smile. We used the back of a Subbuteo astropitch and most of the scenery was made from the polystyrene boxes the models used to come in plus the cardboard stuff you got in the starter box. The sides of the table were covered in wargear cards and you needed D4s to D20s to play. We didn’t get many of the rules right but there were still memorable moments

5. What are you working on right now?
I’m trying to get my Dark Eldar ready for Double Trouble in June but I’m finding line highlights a chore! My latest “finished” project was my pair of Imperial Knights for another event. 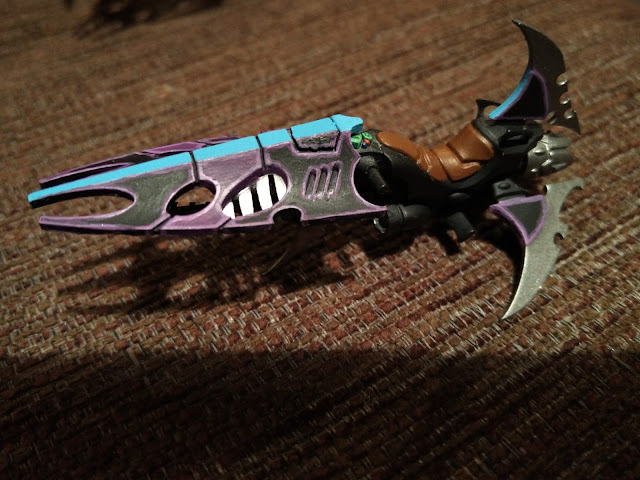 6. When you are not conquering the tabletop, what do you do?
I’m a sonographer (I perform ultrasound scans) in the NHS but no I don’t scan babies! I don’t have a PhD but I do have a Physics masters, a second degree and various postgraduate qualifications. Does that count? (Oh, all right. We'll let you in the club. I don't know where this rumour started that you need a PhD to blog about playing 40k? I blame Marc- Mike).

I’ve been married for 5 years at the end of April and have a two year old son. I look forward to introducing him to board games. Not sure I’d subject him to 40K mind you. Have to see what shape the game is in by then.

Most of my free time is taken up with blogging, painting, odd bits of DIY and running tournaments. I’ve recently got completely hooked on the NFL (go Bears!) and have been to a few of the Wembley games. Other than the NFL, and a love-hate relationship with F1, I’m not a huge sports fan but I do play squash every week.

If I’m not doing any of the above I occasionally find time for video games. I think of myself as a PC gamer at heart. I invested several years into EVE Online which is still probably my favourite multiplayer game of all time. I’m looking forward to Total War: Warhammer even though I have little interest in the tabletop game itself.

7. What would you say about your blog to someone who has never read it to draw them in?
I promote the good side of this hobby and try to prove that the tournament scene can be friendly. I believe you can play to win without being a total dick and that tournaments should reflect that without penalising competitive play. My blog has always been about my journey in the hobby, my constant struggle with painting motivation, attempts to grasp the ever changing rules and dabblings in other non-40K games. For some reason people continue to read it!

8. What is your favourite article that you have written?
Statistically speaking my best post was my 7th editionrulebook review but I suspect this has more to do with good knowledge of SEO than anything else. My personal favourite though is my magnetisation guide for Imperial Knights as this was the kind of content I’ve been trying to post for the last 6 years!

I did used to love the Blog Wars pie chart posts mind you!

9. Which rule would you like to see changed or removed entirely?
Formations in general. Can’t stand them. They do nothing for the game except adding extra complexity to make the game nearly totally inaccessible to new players. They’re just glorified shopping lists to shift miniatures. I don’t want 40K to become overly simple but I don’t like the way it’s currently heading.

I don’t think any single rule is bad. It’s the combinations that get abused that I have a problem with. The system could be much more watertight without losing the depth and it’s about time that GW stopped pretending they’re purely a miniatures company and recognised the rules need more attention. I’m not a GW hater, far from it, I just find them soooo frustrating at times.

10. Which of your armies is your favourite?
Definitely my Space Wolves. I always wanted an SW army when I first started playing but felt the models were too detailed to paint and I’d never do them justice. I remember watching some friends using Ragnar against Tyranids and when they got a new codex in 5th I had to start an army. They’re the reason this blog exists in the first place and there’s just something about them that keeps me coming back. I like all of my armies for different reasons but they’re the army that really got me addicted again. 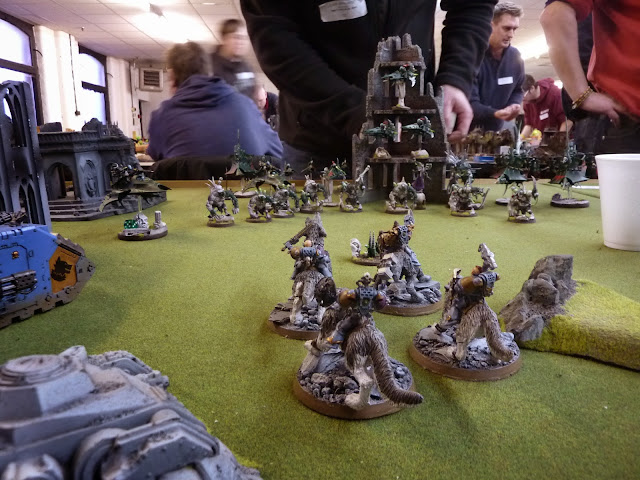 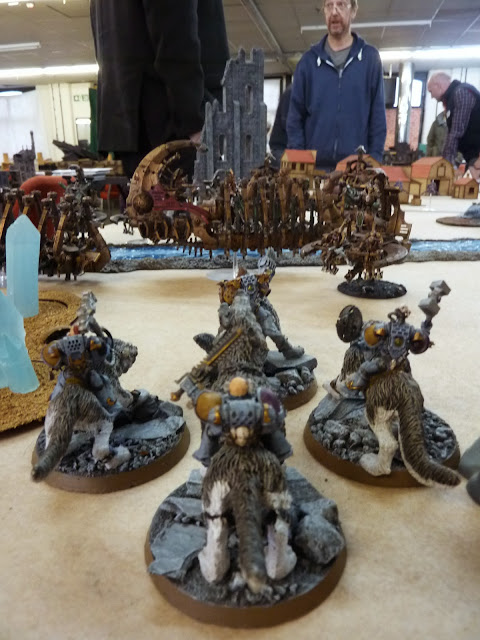 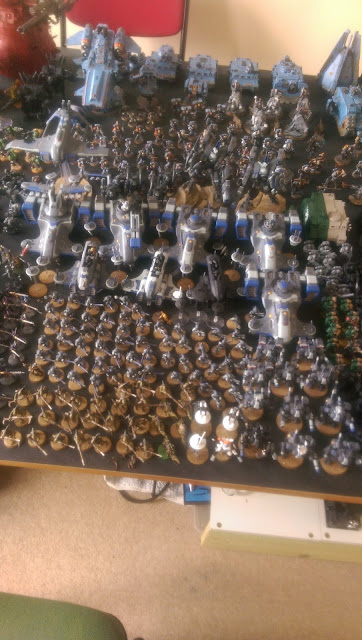 11. Secret wargamer or loud and proud?
Somewhere in between. I used to keep it a secret at work but I’m slowly realising that no-one cares and, if they do, I don’t! I’ve actually found a lot of people used to play or even still do. I’m way past the point of caring whether it’s cool or not anyway.

12. Any hobby tips or cheats to share?
I keep meaning to write a post on this but I wish someone had told me to use a palette and water down paints much earlier. I’d also recommend an airbrush to anyone. I waited far too long to buy one and I’d have a lot more painted by now if I’d got it years ago. Oh and Micro Sol and Micro Set are miracle workers with transfers!

13. Tournament or Casual?
Both. I play to win whatever I do but the games I enjoy the most are the close, relaxed(ish) ones with friends.
14. Nintendo or Sega?
Nintendo. Never owned a console before the N64 but Goldeneye, Ocarina of Time, Mario Kart and Mario 64 all have a special place in my heart (I think my entire high school years were spent playing Goldeneye on the N64- Mike)
15. Xbox or PlayStation?
Xbox all the way. Sony were way too late embracing online gaming. Doesn't help that I'm a Halo fan. Only last weekend I had a pile of mates around my house with 5 big TVs and 5 consoles for some system link Halo.
16. McDonalds or Burger King?
Burger King. I tend to regret it less afterwards.
17. Coke or Pepsi?
It's more Coke Zero or Pepsi Max and I think Pepsi just takes it. Can't say I drink a lot of fizzy though.

So there were Alex's thoughts on his beginnings on 40K. Hopefully we will see you at Double Trouble later in the year for some unique and fun games.
Posted by Mike (St Andrews Wargaming) at 09:00