This week's Better Know a Blogger features Ed from Beserkerblade. 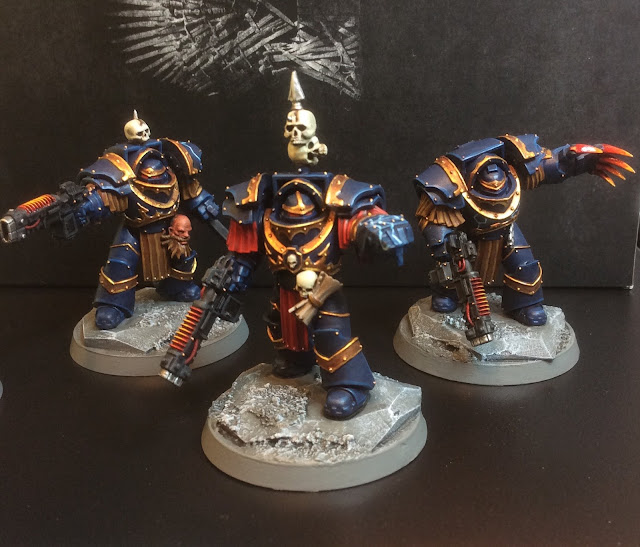 Ed's blog primarily focuses on the painting side of 40k, with regular hobby updates on his fantastic forces to keep you coming back for more. Most recently, he has been updating us on his progress on his Squaduary unit- a Skitarii squad. 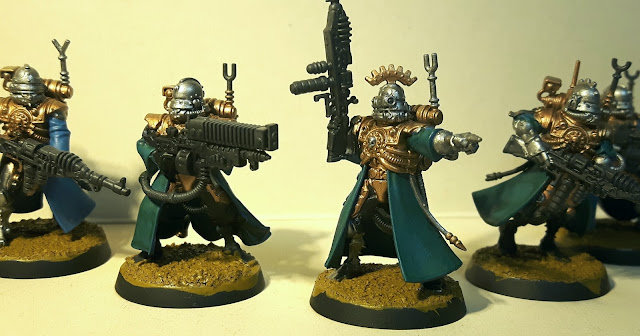 Not just content with awesome painting work, you will also find some battle reports and opinion pieces on the blog. 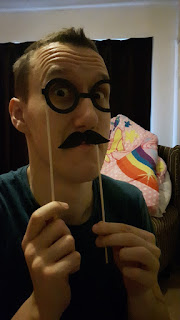 A particular favourite of mine is his awesome Night Lords army. Mix an already great colour scheme with some great painting skills and you have a brilliant looking force to strike fear into the hearts of your enemies!


1. What age did you get into gaming and what started it off?
I think I was about eleven, damn, that’s twenty years ago! I had just started secondary school and got introduced to Warhammer by one of my friends. Come to think of it, the first game I saw was probably Epic 40k, a system I’ve never collected but played a fair few times in my youth. At any rate, it was a slippery slope from there, me and my brother shared the fifth edition Warhammer box set (the one with the Lizardmen) and we had many happy (read: childishly competitive) games of Warhammer in the following years (exactly how I got started too- Mike). I fell out of wargaming in my mid-teens, but always played some form of tabletop games; from D&D to a home brewed Mad Max game that was pretty much the only game I played for years.

What drew me back to 40k was a combination of the Dawn of War PC game and the Dark Heresy RPG. I can remember picking up the core rulebook in Waterstones and being blown away by the artwork, details and grimdarkness of it all. From there I soon progressed in to my first army, my beloved Tyranids.

2. What was the first model you ever bought/painted?
My first model was a Dwarf organ gun, complete with crew. The first model I painted, however, was probably one of the plastic Brettonians from the fifth edition Warhammer starter set. I don’t know if the Brettonian is still around, but there’s a picture of my hideous organ gun below. 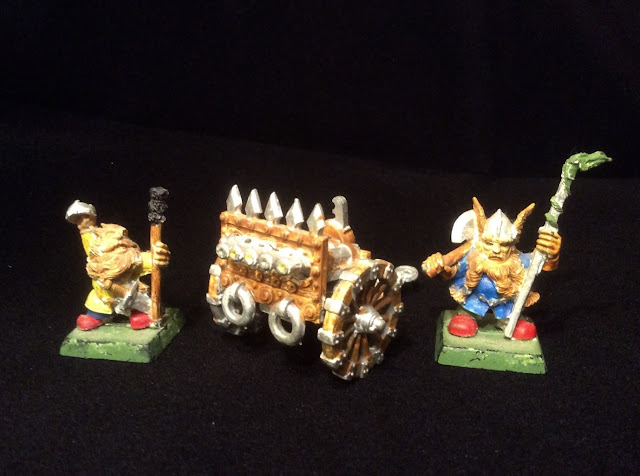 3. What is your favourite aspect of gaming?
I enjoy all aspects of the hobby, but I think overall I would have to say gaming. For me, it’s those moments where the models come to life that make this hobby so engaging and worthwhile. It might only happen once in a handful of games but when that magic combination of dice and miniatures creates an unforgettable moment of heroism or treachery; there really is nothing else like it!

Second choice would probably be kitbashing. Creating models from different bits is great fun and my Night Lords are made up of all sorts of different kits. 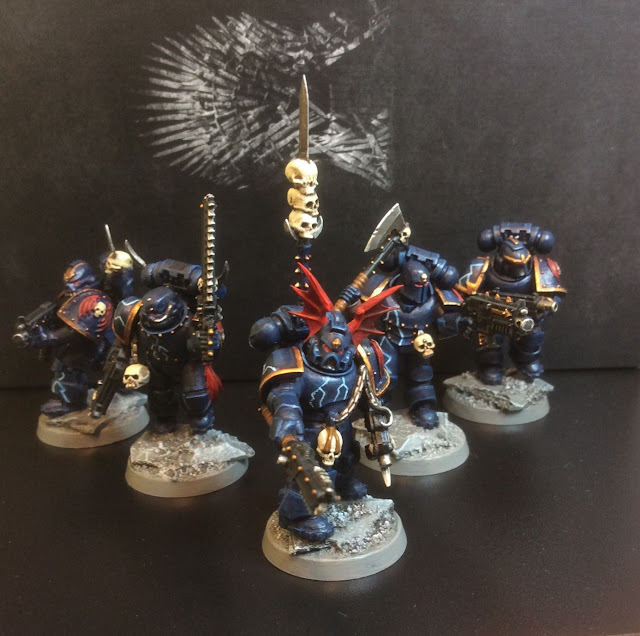 4. Fondest memory in gaming?
There are loads of good ones, I’ve had a lot of fun games against my brother (the infamous Blazmo) and many of our miniatures will be forever remembered for their bravado. Just ask him about Colonel DelRagio’s Desert Dogs sometime……

There was the time my reaper autocannon armed terminator walked across the entire battlefield and climbed a building to engage one of his marines in close combat. Spoilers, I won! 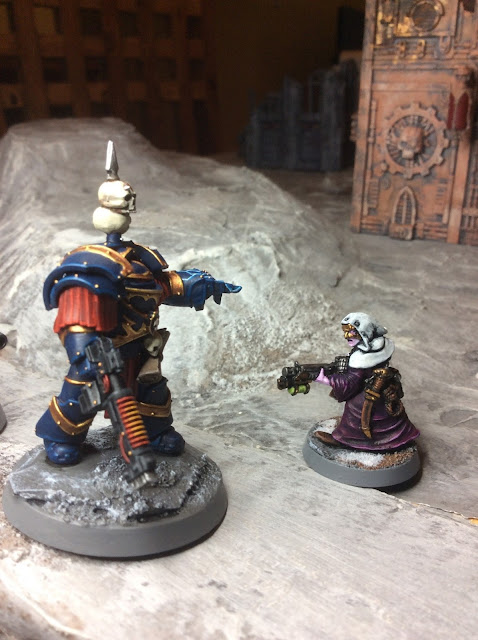 I’ve also had a lot of good fun with my buddy Ron. He and I kind of have the same sense of humour, so our games usually break down into raucous laughter at some point or another. There was one game where we had a running joke about cocked dice, Ron picked up his dice to make a morale test and when rolled, they landed one on top of the other! We both stared in stunned silence for a second before creasing up with laughter.

5. What are you working on right now?
Right now I’m building Belisarius Cawl from the triumvirate of the Imperium set. I’m also trying to finish painting my Hierophant Bio-titan which is proving to be quite the project! 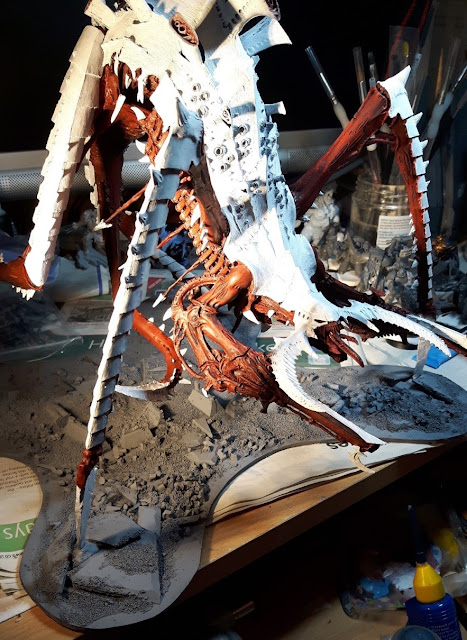 Other than that, I live in a constant state of trying not to drown in all the half-finished models I have lying about the place.

6. When you are not conquering the tabletop, what do you do?
I work in construction as a design coordinator; basically I’m the guy that looks at drawings before they go to site to get built. I’m also battling my way through the early stages of parenthood with my delightful daughter.

I also enjoy reading fiction, particularly sci-fi, black library etc. the works of Chuck Palahniuk are some of my favourites too. 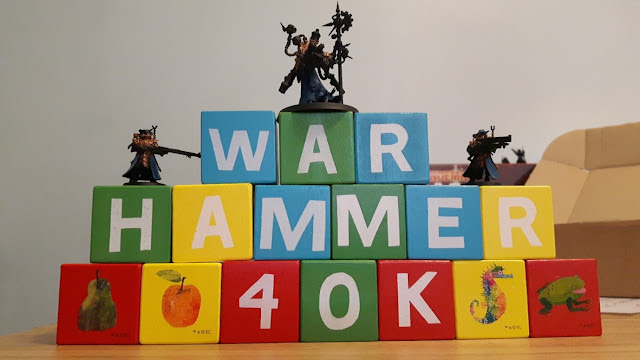 7. What would you say about your blog to someone who has never read it to draw them in?
Boobies!! Actually I have no idea; I’d probably show them a picture of some of my minis and hope they thought it looked cool. 8. What is your favourite article that you have written?
Oddly it’s probably my Space Hulk after action report, a pretty old article but it has some of my favourite things. Lots of exciting moments with my friends, some comedy and a little bit of fan fiction as well. Kind of sums up my blog nicely.

9. Which rule would you like to see changed or removed entirely?
In one word, formations. I don’t object to the concept as such but across all the codices and supplements this has got wildly out of hand. Not to mention the Decurion style detachments, a detachment made of formations which then gets additional formation bonuses! What on earth were they thinking with that one? In my experience this type of list construction just slows the game down with unnecessary special rules and most players lose track of the capabilities of their own army, let alone that of their opponent.

Also, some of the psychic powers have become a bit powerful since 6th edition and I’d like to see that brought back in line. 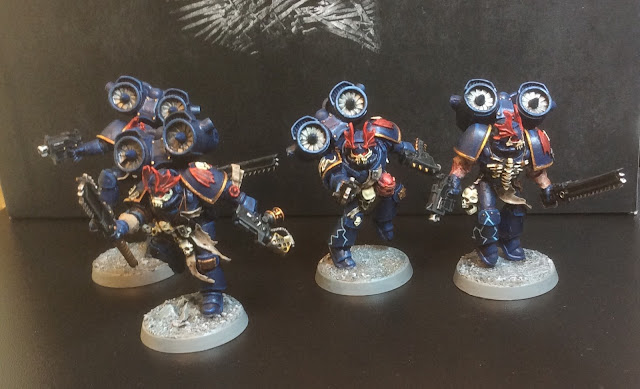 10. Which of your armies is your favourite?
That’s a really tough question; for me, an army has to have excellent models and appeal from a fluff perspective, otherwise I’m just not interested. I love the Tyranid model range; in particular, the Forgeworld Trygon and the plastic Carnifex were the models that dragged me back into 40k in the first place. I also love their background; nothing evokes the grimdark more than the six limbed horrors from beyond the galaxy. Personally, they seem like the ultimate bad guys of the 41st millennium; nobody knows how many of them there are, where they come from or even what their true motivations might be. They are horrific, sinister and a threat to every other form of life in the universe, what more could you possibly ask for?!

The Dark Eldar on the other hand are, in my opinion, the absolute pinnacle of GWs range of miniatures. Fantastically delicate, amazingly dynamic and best of all available in plastic! I’m not so in love with their fluff, but I have become more enthused by it the more I’ve read. I also love to play them on the tabletop, they really are a glass cannon and (thanks to their broken craftworld cousins) you get the joys of feeling like an underdog every time you play. I’ve had more than a few heart stopping moments with these guys but when it all comes together the way they can totally crush an opponent’s army in a single turn is truly incredible. 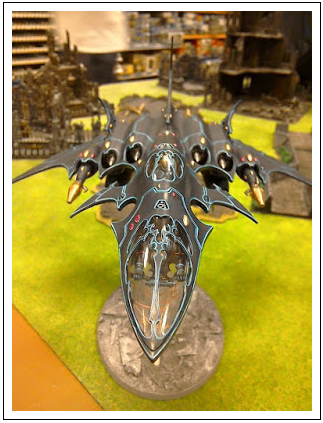 11. Secret wargamer or loud and proud?
Top secret, even my wife, family and regular opponents don’t know about it. In fact, I’m going to have to ask you to delete this post just on the off chance that anyone I know reads it!

Just kidding! Like most of the bloggers around here, I’m a bit of a halfway house. I don’t hide my addiction to little plastic soldiers but I don’t broadcast it either.

12. Any hobby tips or cheats to share?
Hmmm….thin your paints?? No, my mantra is ‘Always dry fit’ sounds simple but I can’t count the number of crazy looking models I’ve seen that would have been vastly improved if someone had just held up the parts for a quick check before gluing. This brings me on to a hobby bugbear of mine which is model posing and dynamism. Even a basic tactical marine can look purposeful and dynamic if you just take the time to dry fit the parts and consider how the finished piece will look. Something as simple as a tilt of the head or raising the arms slightly can make the difference between an average model and a great model. 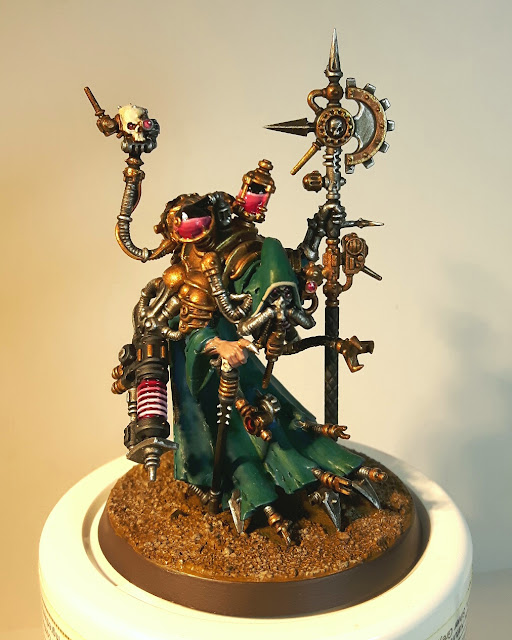 13. Tournament or Casual?
Casual for sure, I could see myself entering a tournament sometime but I’ve had some bad experiences with competitive gamers who bend the rules, or just plain cheat, to get the win. To be hones,t when I come up against guys like that these days I just pack my models away and get out my paintbrush. I’d rather have an enjoyable evening’s painting than spend it arguing with someone about toy soldiers! Fortunately I have a brilliant group of friends who play in the spirit of the game so I can usually get a great game whenever I want.

14. Nintendo or Sega?
I grew up with Sega and it will always be special for me. However, most of the games I play these days are on my 3DS so I guess I’m more of a Nintendo man. 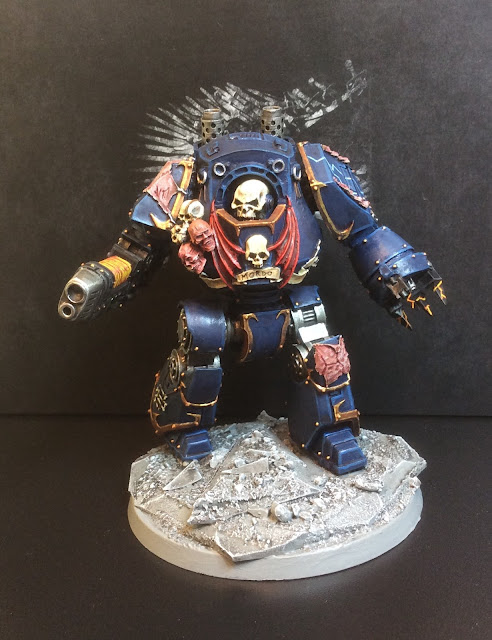 15. Xbox or Playstation?
Playstation, although I don’t really play it much these days.

16. McDonalds or Burger King?
BK, although if you’ll allow me a cheeky write in I’d say GBK!

17. Coke or Pepsi?
Another cheeky write in, Dr. Pepper please!

Thanks to Ed for taking the time to answer my questions, and even posing an additional question for himself! Cheeky, but I'll let it slide (even though Dan Abnett is obviously the correct answer).

Be sure to check out Beserkerblade and add him to your blog roll.

If you have a gaming blog and would like to take part in Better Know a Blogger, drop me an email at corrm83@gmail.com.
Posted by Mike (St Andrews Wargaming) at 09:00