As you will all have no doubt heard on various parts of the internet, GW has released a first draft of its FAQ answers that it asked the community to contribute a while back. They have released this first draft to get feedback from the community about the clarity of the answers and to tweak any misunderstanding for the answers. I am going to look over some of the questions and answers that I found interesting and comment on them with regards to my own armies. 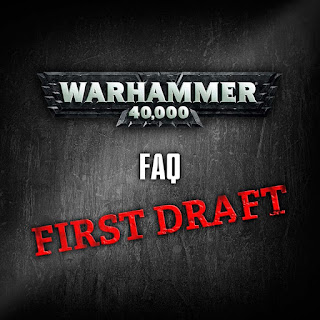 Before we get started, I just want to say that I am loving the new direction that GW are going in at the moment. The decision to re-launch their social media profile and actively engage with the players is one that I wholeheartedly applaud and can only benefit the players. I'm hoping that most people can be civil and constructive to them and not scare them off into abandoning it again.
I'm also loving the new games releases that seem to be flying out recently. I've picked up the Assassins game and just got a copy of Imperial Knight Renegade. This boxed sets are fantastic value for army building in 40k. I didn't pick up Betrayal at Calth myself, but I know plenty of people who did and used it to start some 30k armies.
Anyway, onto some of the answers that stood out for me and how I think they will affect my own forces.
Q- How many Hull Points does a vehicle lose when you roll two simultaneous sixes when using Graviton weapons?
A- It loses three hull points.
Anyone who has read my battle reports knows that I run a lot of grav for my White Scars. Most people accepted that rolling a second 6 against a vehicle and immobilising it for a second time resulted in an additional lost hull point (so 3 hull points for two 6's with grav). This new ruling makes no mention of what happens if the vehicle is immune to immobilised results, i.e. Superheavy vehicles. If this ruling stays the way it is above, then Imperial Knights just got more vulnerable to grav weapons! All you would need is 4 successful grav "wounds" to take out most Knights with this ruling. This will greatly benefit my White Scars if it remains the same.

Q- Using grenades in the assault phase. Can every model replace their close combat attacks with a single grenade attack or just one model in the unit? Like in the Shooting Phase e.g. a unit of 5 Tau Pathfinders charge a Knight. Do 5 Pathfinders make close combat haywire grenade attacks?
A- Only one model from a unit can attack with a grenade in the assault phase. Per Warhammer 40,000: The Rules, "only one grenade (of any type) can be thrown by a unit per phase".
This ruling just made Imperial Knights, Superheavies, Monstrous Creatures and vehicles a lot more durable in combat. I understand the 'one grenade in the shooting phase' rule, but only allowing one in the assault phase seems pretty harsh. Many armies relied on grenades to take vehicles out in combat. Only one attack per turn has made Imperial Knights practically invincible in combat, as meltabombs were one of the more reliable ways to take out these mighty vehicles.

It is also likely to increase the durability of many vehicles as a single krak grenade or haywire grenade attack will be unlikely to take out a vehicle. It will also make vehicles with a rear armour of more than 10 incredibly durable, as most basic infantry will be unable to harm them and have to resort to a single grenade attack.

I was also thinking that if you are charging through cover against a Walker or Monstrous Creature, you will be striking last as you cannot use both your frag grenades and krak grenades in the same turn.

Q- If a Hit and Run roll would take me off the table, do I stop at the table edge?
A- Yes

Q- If a blast template scatters onto a Skimmer, can that Skimmer jink even though it was not actually targeted by the shot?
A- Yes

This is another great bonus for my White Scars and Ravenwing. I always thought that Jink saves should be allowed for any unit hit by a shooting attack as it becomes the target when the shot scatters, though many tournaments ruled otherwise. I assume this will apply to all unit that can Jink, not just Skimmers.

Q- Can you make "Look Out, Sir" attempts against Destroyer weapon hits?
A- Yes

A nice bonus for your characters in any unit.

Q- Can you attempt "Look out, Sir" for wounds allocated outside of the Shooting and Assault phases?
A- Yes

Does this mean that you can "Look out, Sir" wounds from Perils of the Warp? If so, this makes psykers more durable and can reduces the risk of perils significantly.

Q- How many Relics/Artefacts can a single model be equipped with?
A- A model can only be given a single Relic/Artefact of any kind unless specifically noted otherwise.

By my reading, this means that each character may only take a single Relic. I don't think this will have too much affect on my armies, but some people that liked tooled up characters may be put out by this.

Q- Warhammer 40,000: The Rules states that a model get "the advantage of always using the best available save". Does that mean we have to use the numerically lowest save, or do we have the option of using any save we have?
A- The controlling player can use their discretion as to which of their model's saves is "the best".

I always thought this ruling was pretty obvious and that each player should be responsible for which save they thought was best, but not everyone agreed. It's nice to have the ruling officially.

Q- Do Scout redeployments take place before or after the player going second is given the chance to Seize the Initiative?
A- After

This is a huge bonus for my White Scars and Ravenwing. There have been a few games where my opponent has Seized the Initiative and my Scouting units have been caught out of position and unable to assault the enemy units until turn 2. Equally, there have been times where I have been fortunate enough to seize and not risked Scouting my units on the slim chance I could have seized.

This ruling eliminates that dilemma and makes Scout an even more powerful rule than it is at the moment.

ERRATA- "However, some witchfire powers do not have a weapons profile (such as the Telepathy power, Psychic Shriek); where this is the case, no To Hit roll is required- the attack hits automatically"

This makes Psychic Shriek more powerful. I always thought it was unfair to force a player to roll to hit after already making a successful manifestation, especially on one shot powers. Now all I have to worry about is rolling high enough on the 3D6 to cause any damage.

There are various other rulings that I am sure will affect many other players, some good and some bad. It will be interesting to see how the rule wording changes from the first draft to the final version, though I really hope that they do change the grenade one.

What were some of the rulings that will affect your games? Any you are happy or unhappy about?
﻿
Posted by Mike (St Andrews Wargaming) at 13:54