Welcome to part 7 of my review of the Angels of Death codex supplement. This will be a short one, looking at the new formation for running a mechanised Space Marine army- the Anvil Strike Force. 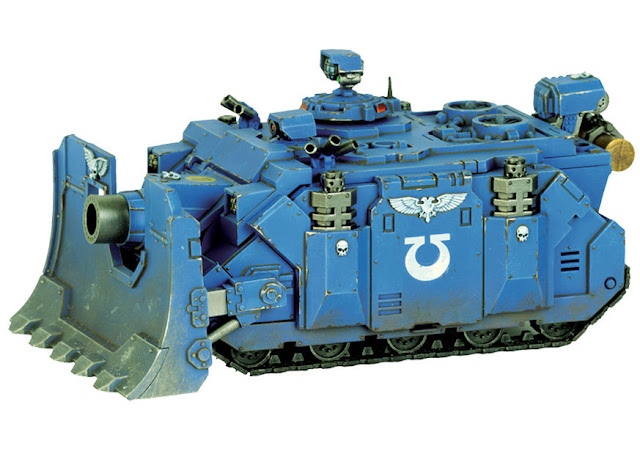 Like most formations of this type, it consists of 1-2 Core choices, 1+ Auxiliary choices and 0-2 Command choices.
The Core choices are made up of either an Armoured Task Force or Land Raider Spearhead.
The Armoured Task Force consists of a Techmarine, 3-5 units of Vindicators, Predators or Whirlwinds, and the option to take up to three thunderfire cannons. The vehicles in the formation get to ignore Crew Stunned and Crew Shaken results if in range of the Techmarine and the Techmarine gets a bonus to his repair rolls. This is a great bonus that will keep your tanks moving and shooting.
The Land Raider Spearhead consists of 3 Land Raiders of any kind. The Land Raiders get the bonus of ignoring all but Explodes results on the Penetration damage table if within 6" of another Land Raider from the formation and get to re-roll failed To Wound and AP rolls against Gargantuan and Super Heavy vehicles. This makes the Land Raiders in the formation extremely durable as only destroying them completely will stop them, and Land Raiders can be hard enough to kill as it is.

The Command choices consist of a single Space Marine vehicle such as a Command Tank, Predator, Vindicator, Land Raider, or a single Techmarine with a Rhino or Razorback.
The Auxiliary choices consist of several from Codex Space Marine, including a Suppression Force, Storm Wing, Anti-Air defence force or several new options. The Mechanised Infantry auxiliary choice contains a single infantry squad including a tactical squad, devastator squad, scout squad, etc (each infantry unit in the formation must have a transport vehicle of some kind). The Recon Outriders auxiliary choice consists of a unit of Land Speeders, while the Honoured Ancients auxiliary choice consists of a unit of Dreadnoughts. The formation also has the option of taking a single Techmarine or Thunderfire Cannon as an auxiliary choice.

The Command Benefits for the formation are:
Master of Mechanised Warfare- You can choose a vehicle from the formation to be your warlord. If you do, you may use the warlord trait, Big Guns Never Tire.

Big Guns Never Tire- At the end of the shooting phase, the warlord or another vehicle of his choice within 2 feet may fire again. This is a great bonus, giving you additional firepower in your army, but will obviously depend on what tanks your army contains.

Armour of Contempt- Vehicles ignore the effects of Crew Stunned and Crew Shaken (though still take a hull point). For an all vehicle army, this is a nice bonus, ensuring that you will have maximum mobility and firepower throughout the game. The benefit of this over the rule for the armoured task force is that you do not need to be in range of the Techmarine for this to apply.

Overall, I like the Anvil Strike Force. It provides a very different way to field a Space Marine army and gives some great bonuses to the vehicles in the formation. I don't think it will be a very competitive choice though, vehicles are still pretty vulnerable to assault, so if a unit survives to get to your tanks, you will probably lose them quite quickly.